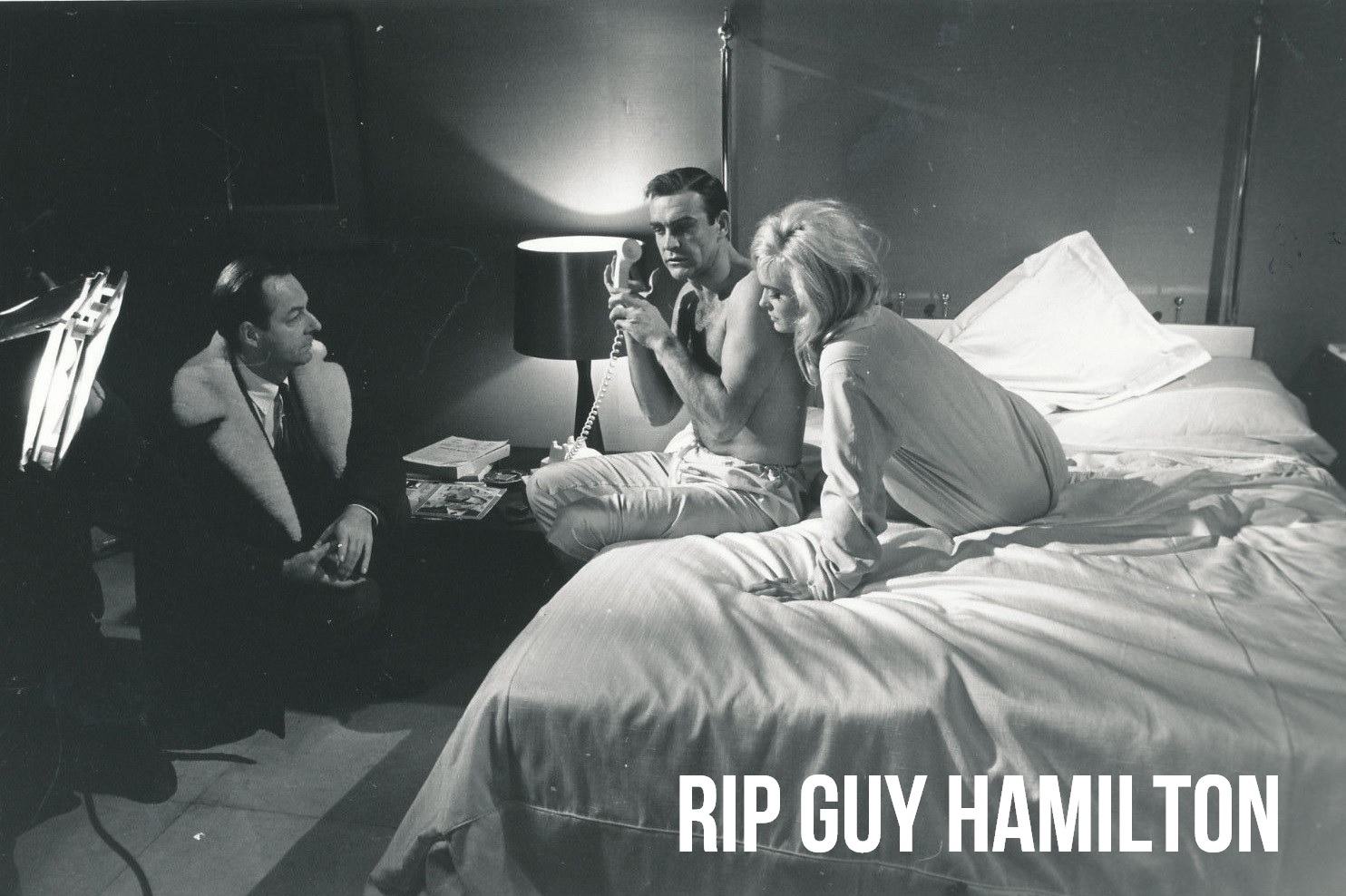 In what continues to be a harsh year for the deaths of cultural pioneers, news comes of the passing of Bond director, Guy Hamilton.

Guy Hamilton was the second director to shape Bond’s cinematic journey. When he came on board to direct 1964’s Goldfinger he steered a 007 bullet that would define everything that came after. Diamonds Are Forever, Live and Let Die and The Man With The Golden Gun were not just further entries in Bond’s cinematic output. They were the films that Hamilton enabled Bond in the 1960s and 1970s to fully echo the timbre and essence of the decade they had to cinematically dominate.

The effect of Goldfinger on cinema, culture and of course the onscreen fortunes of James Bond 007 cannot be underestimated. It’s not just 007 that emerges from the shadows at the beginning of Goldfinger, the modern day blockbuster does. The first two Bond films are brilliant films, yet visually and narratively very static. As soon as we get to Goldfinger the whole film’s about movement. We’ve got the Aston Martin DB5 and the film opens with a diver at a Miami hotel falling down into the water and the camera goes with it. That is down to Guy Hamilton opening up both the visual and pacing dynamic of Bond. Goldfinger is one of the first really visual films of the Sixties. Terence Young’s brilliant Dr. No (1962) and From Russia With Love (1963) are still quite tied to that cerebral, dialogue-based spy world. We are often told the story through dialogue. But in Goldfinger and under Hamilton’s command we are not told a woman’s going to be killed. We see her, painted in gold and dumped on a bed. It is a visual, adult and visceral currency Hamilton afforded the Bond franchise forever more.

A great many of the visual tics of Goldfinger are part of the lexicon of Sixties cinema. Bond waking up with Pussy Galore putting a gun to his face, Bond on the laser table, the DB5, Robert Brownjohn’s gilded titles, Bassey’s notes, a deadly hat and Shirley Eaton dead on the bed – they are all as much a vital beat of 20th century entertainment as they are when Bond turned a dramatic corner on film.

Hamilton returned to direct Sean Connery’s [first] last spin of the Bond dice, 1971’s Diamonds Are Forever. He then continued and bedded Roger Moore into the role with the subsequent Live and Let Die (1973) and The Man With The Golden Gun (1974). In all his Bond work, Hamilton gave Bond a cinematic head-start for two decades where 007 had to be at the top of his movie game or he may well have floundered at the box office. Blessed with cracking dialogue and pacing from screenwriter Tom Mankiewicz, the back-to-back trio of 007 bullets are a rich run of adventures that weathered a less public rift between founding producers Albert R Broccoli and Harry Saltzman. When EON Productions and Cubby went solo with 1977’s The Spy Who Loved Me, it was Hamilton who ensured the series was left in a solid enough place for the public – and EON’s – confidence to move forward.

“We mourn the loss of our dear friend Guy Hamilton who firmly distilled the Bond formula in his much celebrated direction of ‘Goldfinger’ and continued to entertain audiences with ‘Diamonds Are Forever,’ ‘Live and Let Die’ and ‘The Man with the Golden Gun.’ We celebrate his enormous contribution to the Bond films.” – Barbara Broccoli & Michael G Wilson on behalf of EON Productions (Variety)

Hamilton was often circled to return for other Bond movies (he was first approached for 1962’s Dr. No but reportedly turned it down) and was the first director attached to helm what became 1978’s Superman The Movie (a tax situation meant he had to ultimately pass on the reins to Richard Donner). Hamilton also directed Harry Saltzman’s Battle of Britain (1969) and possibly the best Harry Palmer film, Funeral In Berlin (1966). Other work included Alistair Sim’s An Inspector Calls (1954), The Party’s Over (1965), Force Ten From Navarone (1978) starring Harrison Ford and 1980’s The Mirror Crack’d which gave an early role to future Bond, Pierce Brosnan. In 1982 he returned to the world of Agatha Christie to direct possibly the best of the on-screen adaptations, Evil Under The Sun. The film is a delicious and meticulously plotted treat with Diana Rigg and Peter Ustinov on full sail and a cracking Cole Porter score.

In perhaps his best gift to the Bond franchise, Hamilton proved something that had yet to be proved for 007 himself – that you can successfully recast a Bond director and take the series forward. Again, it is the legacy of movement and momentum he gave to Bond.

Diamonds Are ForeverGoldfingerGuy HamiltonThe Man With The Golden Gun