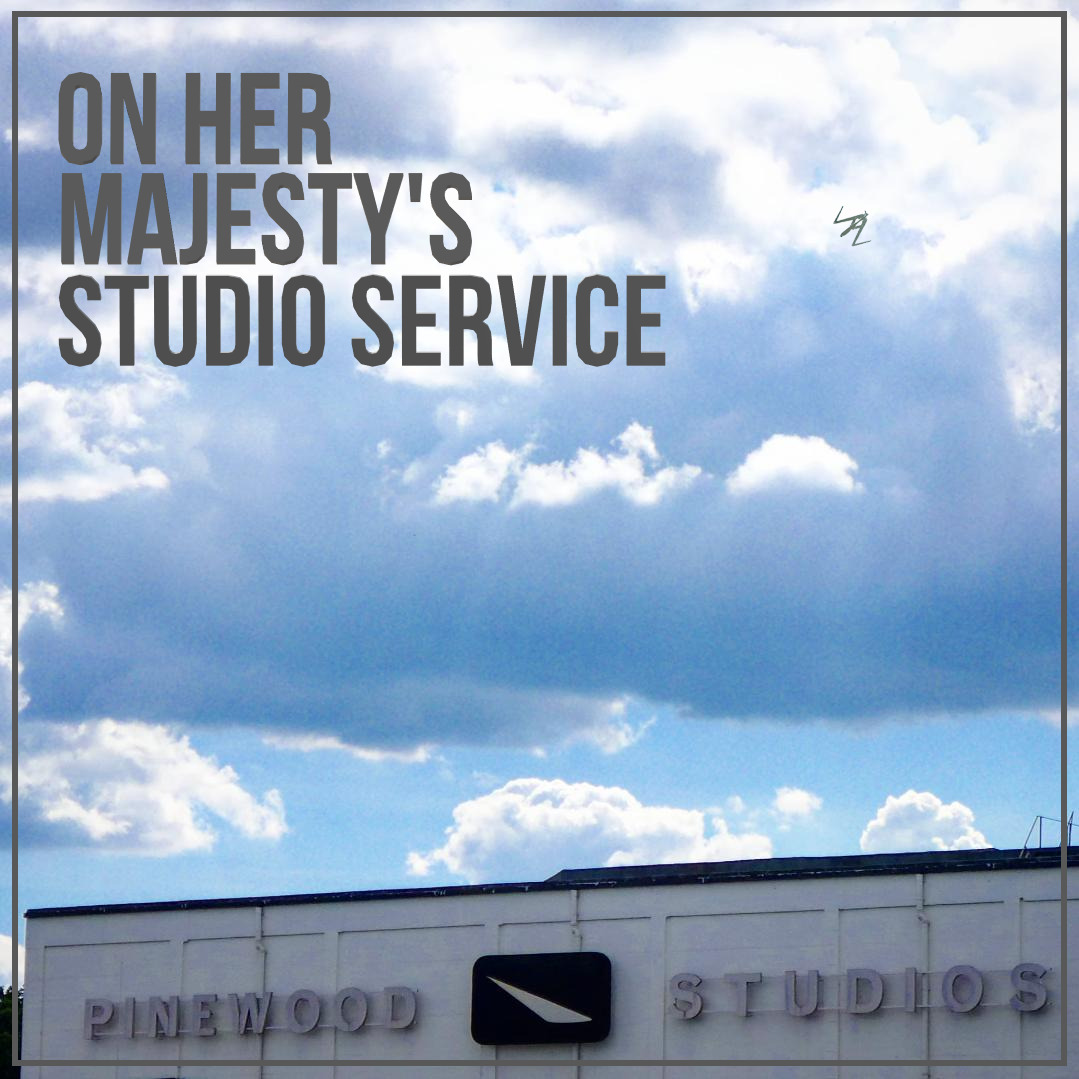 Ever wanted to visit the palace of dreams that is Pinewood Studios?

The Pinewood Group is to create ‘Screen Hub UK’ with an investment approaching £450m at the Buckinghamshire lot outside of London. With the plans to create 3.5k new jobs, at least £230m into local economies and £125m into the tourism industry, the new expansion, and plans land at a precarious point in the ever-precarious history of British film production. Production has resumed at Pinewood on the likes of Jurassic World – Dominion and recent productions include Marvel’s Morbius and The Eternals, a new BBC television version of Pinewood classic Black Narcissus starring Gemma Arterton and Diana Rigg, the 25th Bond bullet No Time to Die and the forthcoming Kenobi series for Disney+ starring Ewan McGregor.

Screen Hub UK plans to be based on a new 77 acre site to the adjacent south of the existing film studio and expands upon the new East Gate expansion – which now includes Skyfall Avenue, Michael G. Wilson Road, Tim Burton Road, Stan Lee Road, Warwick Davis Avenue, Meryl Street (no word of a lie!), Lucas Avenue and The Roger Moore Stage – a development that has doubled the capacity of the world famous soundstages and secured production for a studio not always historically able to claim long-term business security.

Alongside the Screen Hub UK will be further new production facilities, education, training and skills centres, a creative industries business growth hub, a green campus and perhaps the one announcement movie fans will be most curious about – the Pinewood Studio Experience. Billed as a ‘film inspired international visitor attraction’, the Experience will link up to some new production facilities, finally allow fans to visit the famed site, boost local economies whilst stressing this is not a theme park as such. There will be no tourist water rides with an Aston Martin DB5 coming out of the water for a tourist photo op, yet this bullet catching Bond fan does imagine a gift shop for all those Pinewood Studios tea-towels and fridge magnets.

The Pinewood Group will also be expanding the nearby Shepperton Studios – the new UK home of streaming service, Netflix – with a 1 million square foot development at both sites and a final shared tally of 29 new soundstages. The plans will now be put out to public, local council, governmental, stakeholder and investor consultation.

“The Government and Buckinghamshire LEP have recognized Pinewood Studios as a major economic asset to be enhanced with the creation of a screen growth hub for the UK.  We are pleased to be able to respond with this scheme.  We have been looking at a visitor experience for some time and feel that now is the right moment to bring it forward.  The project will strengthen UK film and bring much needed jobs and spending.  We hope our planning application will receive widespread support.”

From London Melody to No Time to Die, Pinewood Studios has now been home to British cinema production for eighty-four years. The moments of cinema that a plot of land in Iver Heath, Buckinghamshire can lay claim to are myriad. From Ripley and her flame thrower in Aliens, the first class X Men movie revival, the splurge gun attack in Bugsy Malone, the watery titles and Macau casinos of Skyfall on the water tank, the attack on Jaaku from The Force Awakens, the streets of Metropolis in Superman II, the November skies (and mud) of summer in Carry on Camping, David Lean’s sublime Oliver Twist, Douglas Bader flexing his legs and fortitude in Reach For The Sky, Sidney Poitier demanding attention in To Sir With Love , the killer plant and score from Little Shop of Horrors, playing itself in My Week With Marilyn, an elf toy making factory in Santa Claus The Movie, Kubrick’s many re-takes on Eyes Wide Shut, Fassbender’s Assassin’s Creed, the spin-off ambitions of Rogue One and the sidebar Star Wars projects – there is a long, proud and growing lineage of productions lensed, edited, sound mixed and conceived at Pinewood Studios. 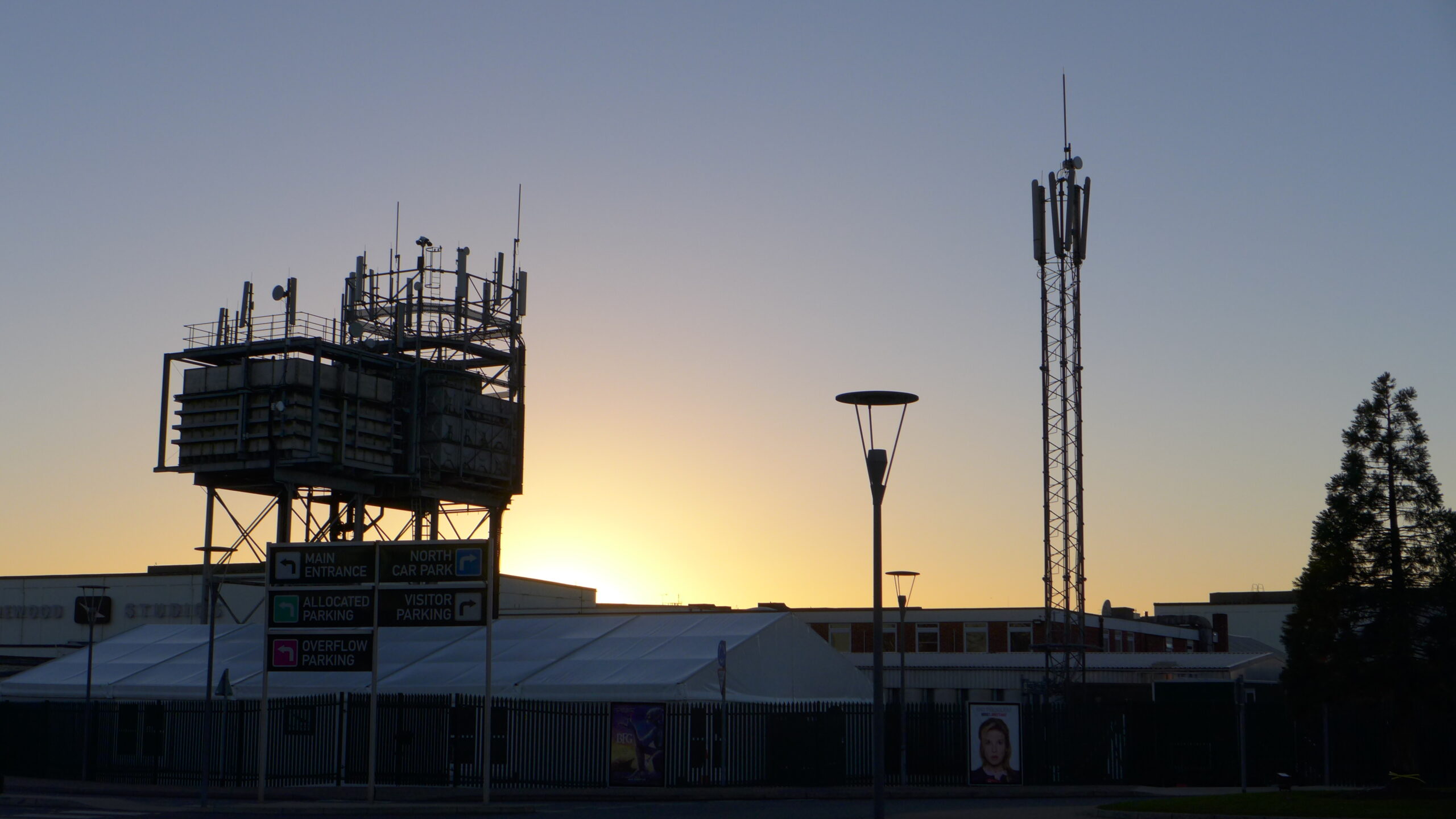 Pinewood Studios officially opened its studio doors on September 30th 1936. J Arthur Rank had gone into a partnership with housebuilding magnate Charles Boot to turn a former estate known to dignitaries, sportsmen and politicians alike (the 1921 Anglo-Irish Peace Treaty was signed in Heatherden Hall) into a thriving film studio complex on a par with anything turning cameras and heads in Hollywood. The soundstages were quick to be completed and after the ribbons (made of celluloid one hopes) were cut in September 1936 the studios became a much-used commodity on the British and eventually international movie map. A stint as an offshoot home of the Royal Mint, a few fires, evolving technologies, the onslaught and eventual marriage with TV, production calamities, union walk outs, interesting dining faces in the Ballroom restaurant, through the night shoots, tours, tears and tiaras, Ken Adam designed behemoths, Oscars, BAFTAs, business partnerships, TV shows, commercials, pop videos, re-dedicated soundstages and reconstituted golf and milk carts all followed. 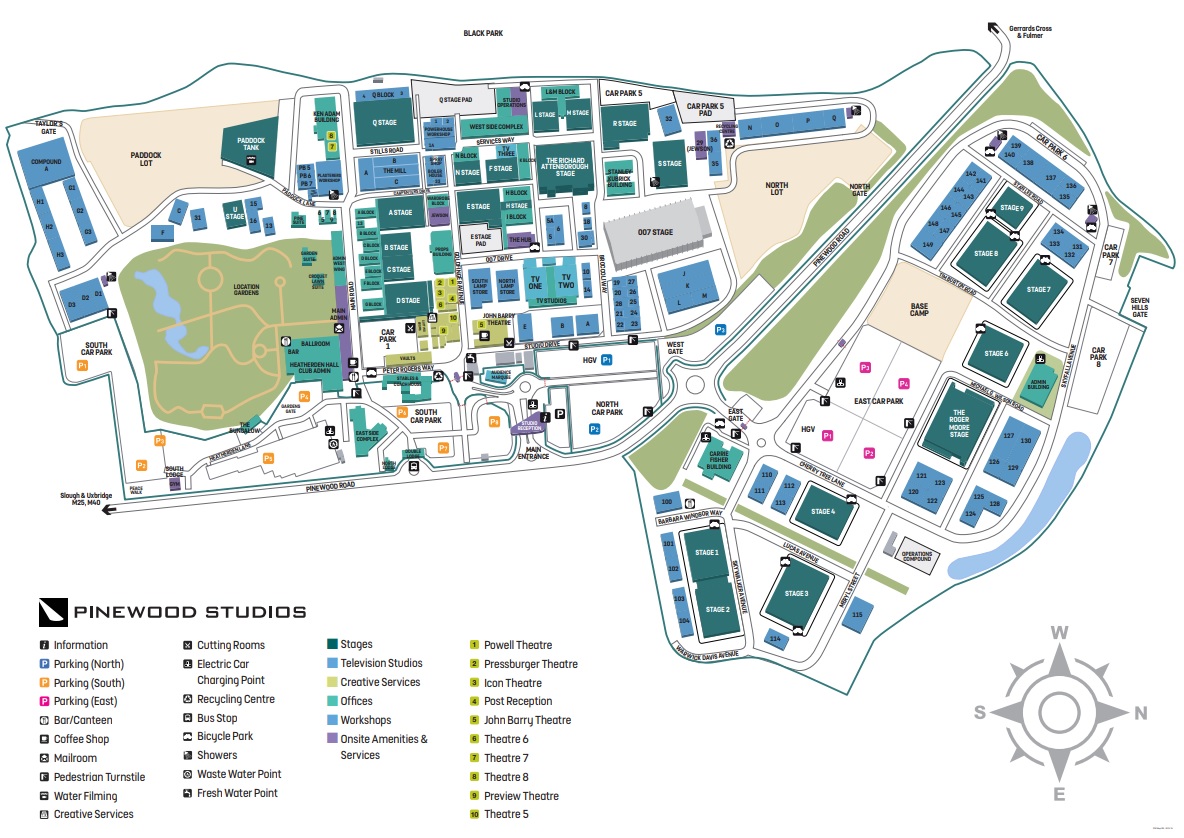 Drive-by genuflections aside, this writer first visited Pinewood properly and professionally in 2008. It was – and still is, albeit with newer thinking and less history – exactly the sort of studio complex you imagine and desperately want to see. It was like that early scene in Who Framed Roger Rabbit where old Hollywood is seen in all its’ can’t stop, too busy glory. A-List names in full costume would pass by on golf carts, everyone sported mic packs, clipboards and headphones, the crews would knock off to the bar for lunch, artifice loomed round every whitewashed corner, named parking spaces laid bare the pecking order and no matter what the weather every view told a story.

To all movie fans, Pinewood Studios is of course Xanadu – a 007th heaven of movie production, admin, incessant carpentry, haulage trucks, cable wranglers, rehearsal bells, the immediate silences on a take, the paper coffee cups, framed and sunburnt posters of past glories, and the feverish five o’clock exodus round the roundabouts to get out and home every day. Such adulation was further helped by mid 80s Making Of docs which would inevitably go behind the Pinewood scenes with a reverence and magnificence that is catnip to movie kids brought up on Bond, Superman, Batman and Star Wars. Of course the history of Pinewood reflects the successes and vagaries of the British film and television industry.

The 1970s and 1980s particularly were a difficult time for Pinewood and British film production. Where it not for a new Bond, a visiting Supergirl, a BBC sitcom or back to basics Batman, Pinewood may not have survived the 1980s and still now be movie behemoth more careful business plans and market safeguarding have now achieved. Movie fans are forever bereft at the inability of the public to be able to visit. It was always a sign of Pinewood’s industry that says it is just not practical. However, The Pinewood Studio Experience plans to change that.

Of course, movie production is ever fickle. And 2020 has brought its own challenges, crushing industry loses, financial blows and mass industry unemployment at every part of the process. The knock-on effects of 2020 on the arts industries in the UK alone have yet to be – ironic as it has been Disney, Netflix, Bond and Star Wars titles shot at Pinewood that so many lockdowned people have turned to. However, Pinewood has maybe learnt from its near fatal mistakes of the past. It has not only created its own studio and business outposts throughout the world (Toronto, New York, Wales, Malaysia, the Dominican Republic and Los Angeles are all part of the Pinewood global map), it now envisages a future and finances [and security levels] safeguarded for a while. 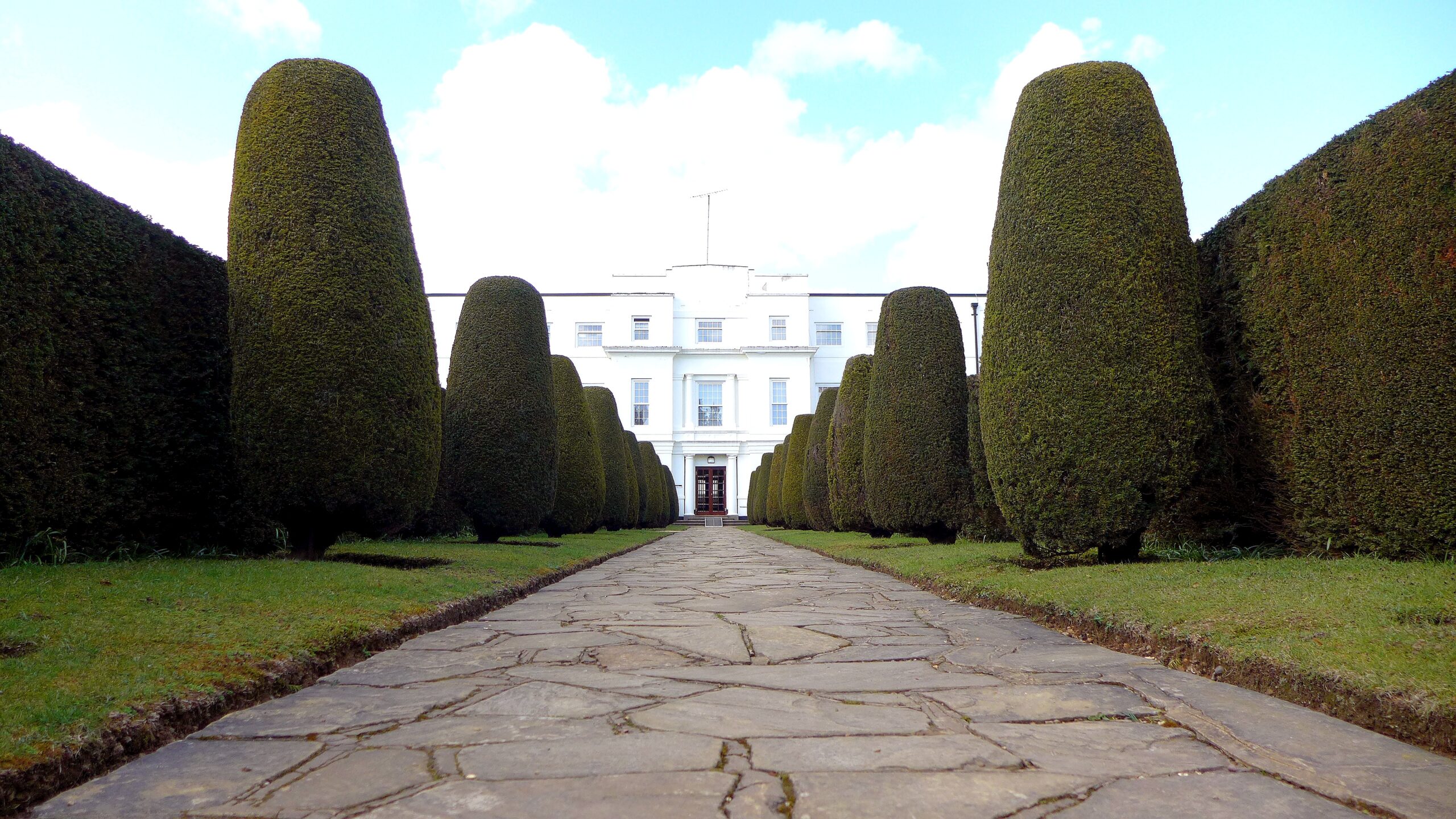