LARGER THAN LIFE – Reviewing MY DINNER WITH HERVÉ 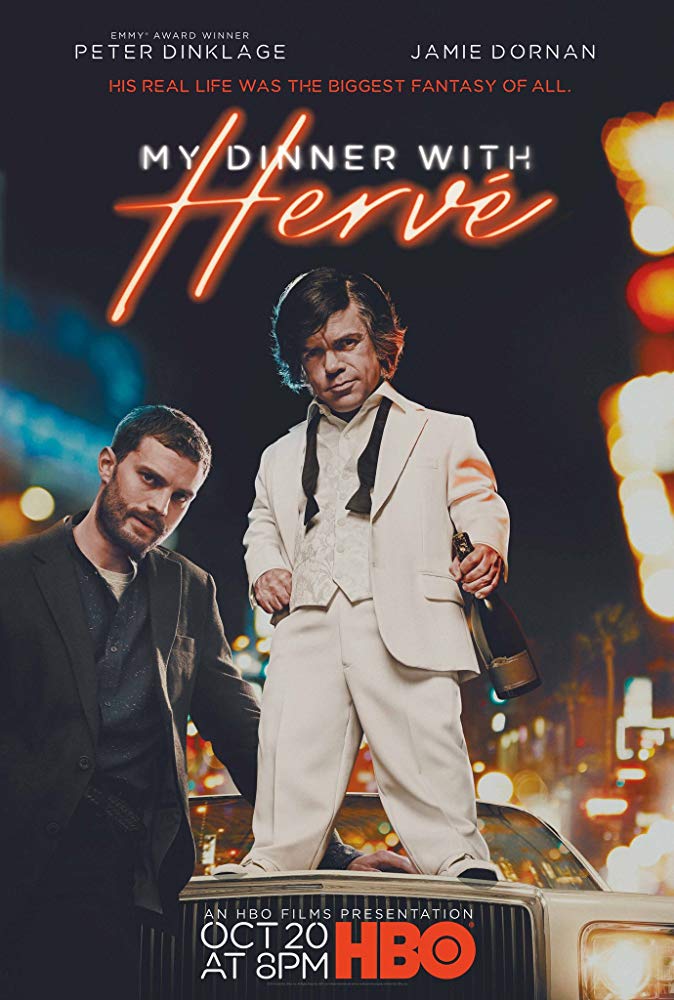 “I have a real story for you, junior”

In a ’90s Los Angeles of The Fugitive billboards and Verve hits, ex-alcoholic and Mail on Sunday journalist Danny Tate (Jamie Dornan) reluctantly and hurriedly gets through a threadbare where-are-they-now piece on the actor Hervé Villechaize (Peter Dinklage) that both know will barely make the recipe back-pages on a Sunday. With bigger fish to try, fry and potentially hang from the print rafters in the form of a prickly Gore Vidal (the rather well cast Michael Elwyn), Tate screws up both interviews and is left with nothing but a hotel room mini-bar to goad his sobriety and career impasse. As his own tale is about to unravel with a high profile sacking and probable divorce from scared ex-wife (Oona Chaplin), Danny ponders an earlier promise he dismissed from Villechaize – one that would provide a “real story” for a journalist who could maybe do with some editorial luck. Cut to one unsure phone-call later and Danny, his satchel and Dictaphone are on the back seat of a Los Angeles limo with Villechaize, his wild memories, his version of those wild memories and the beginning of a single night that became life-changing for them both and the basis for HBO’s latest biopic, My Dinner With Hervé.

“Just because a man is small doesn’t mean he has to act it.”

In adapting his own story and making a few fictional tweaks where necessary, director-writer Sasha Gervasi (Hitchcock, The Terminal, Anvil!) doesn’t hold back on the self-reflection. His September 1993 interview with the ex-star of 1974’s The Man with the Golden Gun became a turning point for Gervasi – and ultimately a sad swansong for Villechaize. Born to French parents in a war-torn Paris in 1943, Villechaize was born with dwarfism and a lifelong drive to stand both tall and defiant in the face of romance, his art and career. It is a defiance that is already legendary to Bond fans – the tale of the ’70s henchman with a barely off-screen penchant for the ladies, bottle and partying hard. But through Gervasi’s screenplay and boldly pitched flashbacks, this is soon a life launched with public abuse, freak-show attentions, back-alley kickings and an embarrassed mother who knows only to reject. Whilst Peter Dinklage’s French accent, swooning and early beatnik hairpieces come from the box marked ‘Clouseau’ (admittedly, Villechaize’s own unique accent was very French), Dinklage and director Gervasi slowly erode the bullet-points biopic and nurture the story into one of great honesty about a colourful era of entertainment and a sad insight about human frailty. Two thirds in and we realise that Hervé has not actually remembered everything as it happened – but more as he needed it to happen. A fall from grace is no easier if you have less height to fall. And the frailties we all have are only bigger to someone with a strained body literally buckling under its own weight and that of Hollywood’s expectancy.

“I want you to interview the most famous dwarf in the world.”

The Phuket shoot and premiere-night launch of The Man with the Golden Gun is of course recreated. It is a time that Villechaize (and later co-star Christopher Lee) purported to be the happiest of his life. 007 fans will perhaps be less happy at the office-party Bond reconstructions as Mark Umbers’ Roger Moore breaks the inevitable seal on potential Bond-minded biopics and dramas with threadbare parody and derivative derision. Whilst clearly betraying the production’s inability to use any real Bond music, imagery or logos, the 007 scenes are budget at best with Guy Hamilton (Doug Cox) and Britt Ekland (Helena Mattsson) getting no more screen time than a familiar swimming costume or two, as co-stars Maud Adams and Christopher Lee and producers Harry Saltzman and Albert R. Broccoli are nowhere to be seen. 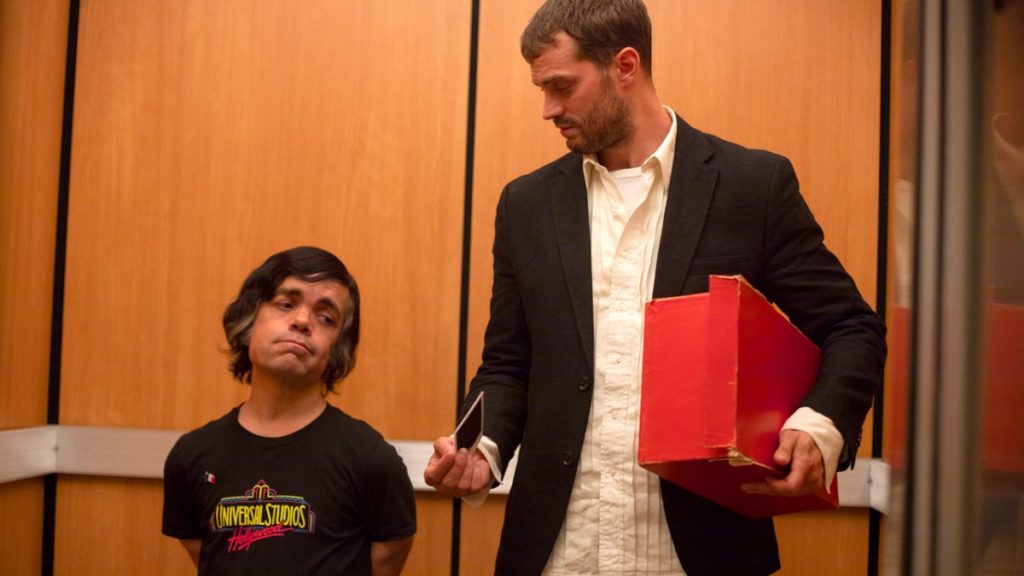 But My Dinner with Hervé is not about the making of Roger Moore’s second Bond bullet. He is not invited to the dinner in this instance – though some shared scenes of the two could have been welcome. But, this film is not about the Nick Nack and how to get it. It is about one night’s remembrances, regrets and realisations of a fifty year life. When we see the premiere night reaction to the re-constructed closing scene of Bond ’74 all over again, only then do we realise why Hervé is remembering it differently. And to be fair, beyond its two leads nothing in My Dinner with Hervé is as memorable or as faultless as Andy Garcia’s pitch-perfect Ricardo Montalbán. His is a debonair, ivory-suited suave-machine of television and perhaps the only one other than Dornan who Hervé regrets disappointing. The Man with the Golden Gun may have introduced Hervé Villechaize to the world’s stage. However, it was Aaron Spelling’s long running TV show Fantasy Island which kept him there. That he chooses to walk off it, to jeopardise it, to turn up drunk and argue all over it is only ever Hervé’s call. With director Gervasi having real era-savvy fun with his recreations of those big white Fantasy Island titles, its “guest star” promise and that ’80s sense of LA backlot color is one of the film’s triumphs – and the point when the story clicks into the place that limo has been circling all night. When Dinklage and Dornan return to the abandoned Fantasy Island location years later, the artifice and tragedy of Hollywood and Los Angeles is never clearer. 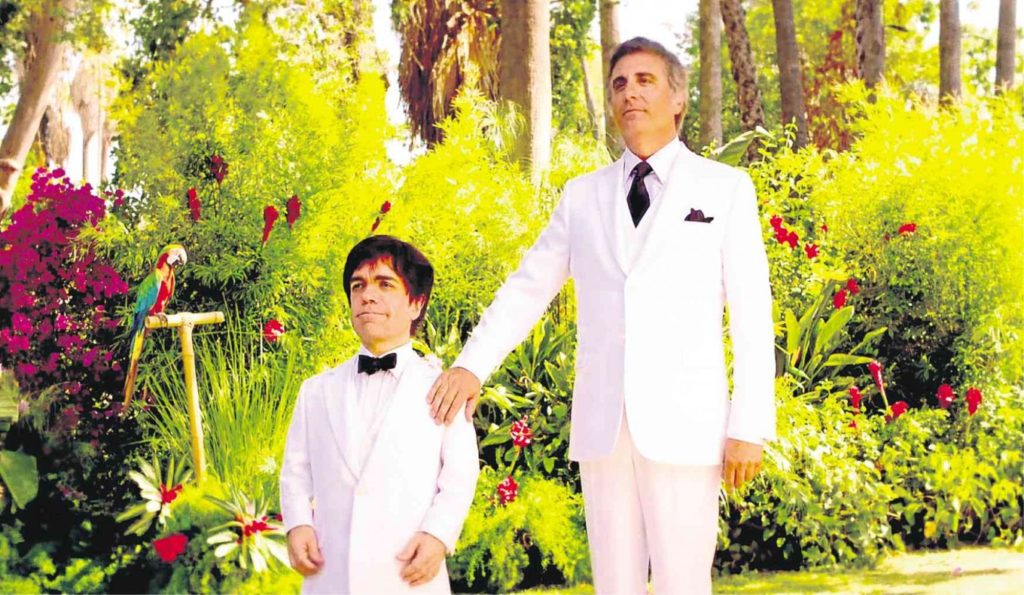 Gervasi may have cast the ever-beautiful Jamie Dornan as a rather striking and angrily Northern Irish version of himself. But this is not a film that redacts the journalist’s life-mistakes just as tries hard to not overly judge Hervé’s. Never just being the Dictaphone conduit for someone else’s fractured memoirs, Dornan’s Danny is a cynical, recovering addict aware of his own regrets whilst spending time with someone who has too many of his own to cope with. Danny is also one of Dornan’s best screen performances. With less narrative bells and whistles to latch onto than Dinklage, Dornan still manages to remind audiences all over again how he is a quietly vociferous, deceptively skilled and often underrated force of movie nature.

But this is Dinklage’s gig. Almost shedding Game of Thrones’ Tyrion Lannister – almost – as he swaps flagons of wine and peasant strippers for champagne bottles and stripper dollars, the role of Villechaize still curiously holds similar tragedy. Though there are no dragons or gilded kingdoms here to fall back on for Gervasi’s near-penniless subject and brief friend. Instead, Dinklage’s Falstaffian lunges and brazen outbursts are very soon countered by a jaundiced realisation Hervé’s party is over and the lights came up and went off long ago. A life forever framed by missed opportunities, others regrets and dated catchphrases for strangers would not be enough for anyone – least of all one of ’70s cinema’s biggest characters ailing in a world where only his death will get the story heard.

My Dinner with Hervé is a HBO Films production and currently available on HBO and Sky Atlantic.