A BAT OUT OF HELL – Reviewing THE BATMAN 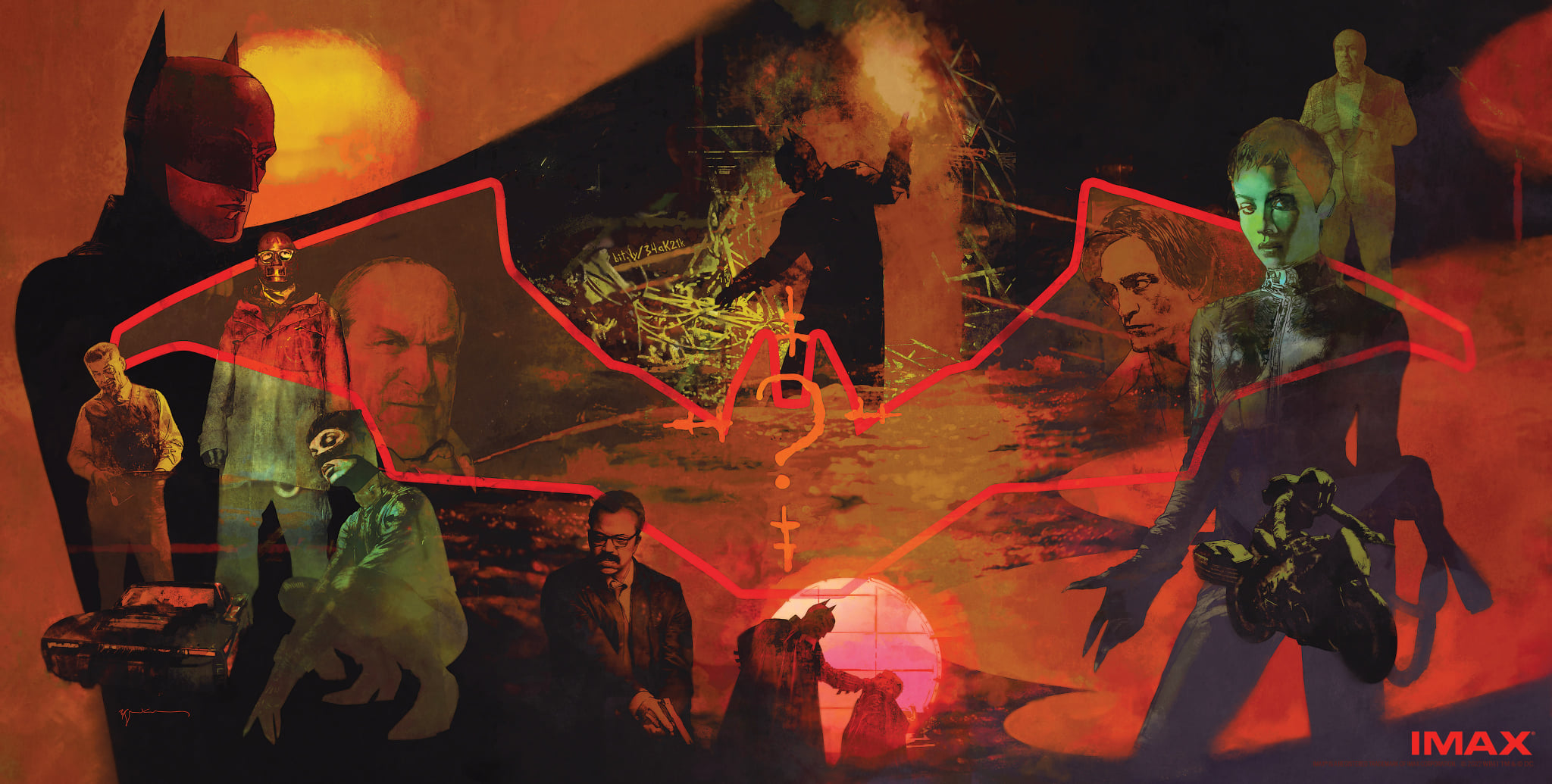 Too reliant on tone and tropes for narrative and no way in Gotham is it some masterpiece, The Batman is however a sometimes brilliant, but problematic twirl of the cape.

The problem with a three hour film that is marinated in scratchy, unlit grime is there is nothing else other than scratchy, unlit grime. The only real colour comes from TV News branding and the deliciously 1970s minded poster artwork. There is not one street scene of people just talking. No street vendors selling hot dogs. No crosswalks. No colour. No sunlight. No one has dinner. No melody in the score. No barbed wit. No support villain visually being a support villain – apart from mob dressing signposts and foreground exposition about old deals gone wrong rather than positioning them in the narrative right now. Batman ’89 has the Palance-led villains in the midst of being bad guys. The Batman has three hours to play with and still does not really show a deal going wrong or any real factory shoot outs that push the story forwards. The Iceberg Club scenes are fine, but their dangers all lurk in their story past. They remind how Farrell is wasted as a great Penguin, and the villains here are clearly having more fun than any of their law-enforcing counterparts forever just turning up at the scenes of crimes – which ends up feeling more David Fincher than Batman.  When Farrell’s Oz has to walk with his ankles bound amidst an in-joke to Burgess Meredith’s gait in the same role, it just feels a wasted opportunity for fun and comic-strip excess in what is ultimately just a three hour mood.

The Bat franchise wants its comic book villainy. Bruce Wayne is nothing without it. Yet, there is no counterbalance here. Everyone and their daddy issues inhabit the same monochromatic and metaphorical alleyway. Even a probable Joker cannot have an ounce of green or purple (and any story carrot being waved at audiences for future reference only underscores just how this film needed more stick). Paul Dano’s Riddler is now an online Jeffrey Dahmer with a HQ and impulses no different to the Dark Knight himself. And totally devoid of colour.  The Riddler is meant to be a buoyant crackpot. Not some angry virgin hangover from The Social Network. The very design aesthetic the franchise is so brilliantly known for gets lost in a tone that has the constant depth of a dark fan-baiting teaser poster darkly proclaiming how this is going to be dark. If Wayne Jr. cannot enjoy even one exchange or societal quip then he is as desolate and lost as his villains. A tone should never be the scene stealer of a film. 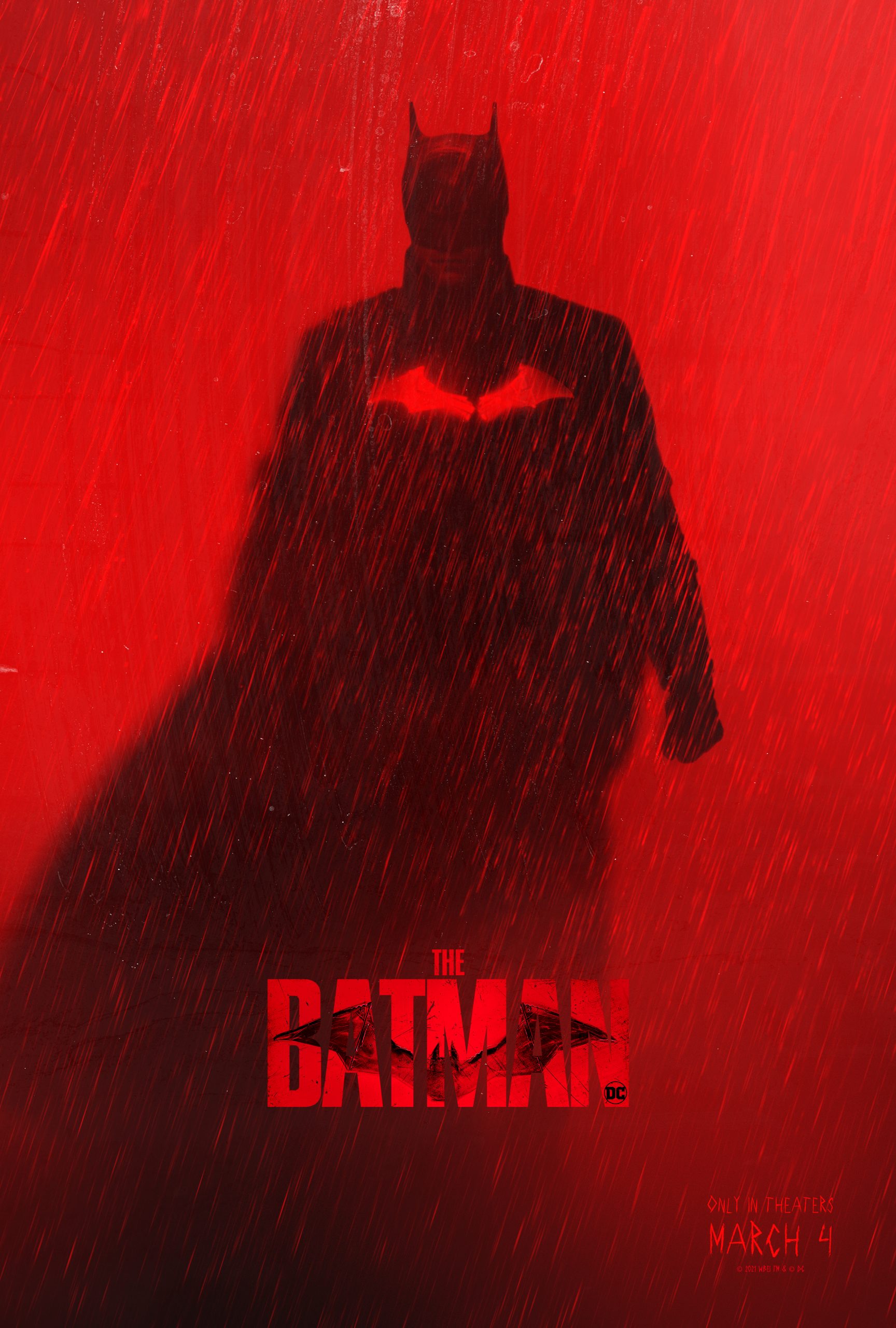 However, somewhere in the indulgent and unnecessary running time is a cracking Gotham does Chinatown mystery. Set in a Jan 6th rioter world of vicious online crazies, the film is wisely very much a Gotham storming of Capitol Hill. Which is ironic for a franchise and movie genre that is desperately wanting to appease online crazies with Reddit accounts. Despite the colourless Rorschach test of a film, Pattinson’s Dark Knight is still a warmer, sexier and kinder Bruce. The mask and cape ditches the doorman gorilla shape of the Bale Bat and the gadgets are kept to a minimum. But enough with the shared looks of grief with orphaned teen boys, Bruce. This ain’t Bat in Venice. Overall, Pattinson’s scowling soul is the film’s triumph. With a face more readable and emotionally exposed than for a while, he is a great Batman. Possibly the most likeable since Michael Keaton. And none more so than in his scenes with Zoe Kravitz’s Catwoman.

A Batcave may not have gone amiss for a wealth playboy vigilante who never gets to really play or be a boy with toys. But, the Mad Max meets The French Connection crime milieu is a great call. In a story about the corruption of wealth and social standing, this is not a hedge-funded vigilante. Here is a hero whose best weapon is his own resolve. And the Death Proof meets Vanishing Point Batmobile is brilliant, simple and damn cool.

The detective trail is easily the film’s creative victory. Again, the constant charcoal tone and Sopranos backstory almost hinder proceedings, but the paper-trail mystery totally works because it always puts Batman at the heart of the discovery. Instead of a Bat-boat or Bat-shield, Pattinson is equipped with a detective’s instinct. Harking back to the ink-led origins of the character, he questions and re-questions. It elevates his Batman and makes ditching the tropes, bells and bat-whistles much less of a loss.

“This is about a powder-keg and The Riddler is the match.”

As ever, the Wright stuff is brought by this particular Commissioner Gordon lending the gravitas the film doesn’t get from its villainy. And Jeffrey Wright feels more of an Alfred and Robin than his story counterparts. Zoe Kravitz’s Selena Kyle is welcome post-Nolan as a Catwoman who actually is Catwoman rather than just having two feline ears on her headband. Kyle’s backstory always feels more immediate and graspable than Bruce’s. And their final scene powering through Glasgow’s Necropolis on motorbikes is a cracking motif and a joyous beat the film needs more of in its three hours.

Production wise, there is a fresh vista to James Chinland’s Gotham. It is a contemporary Staples Center staple of a town. The rust belt art-deco tics are replaced by constant crane shot perspectives of Chicago on the Hudson, and whilst everything feels like it is set inside an un-lit cathedral’s knave, the story is never lost. Victorian Glasgow lends the right grind of black gothic pepper the film needs more of. Although, the imminent Batgirl (2022) is also currently lensing in McGotham so Scotland’s second city has more bat and mouse games up its cape. However, maybe modern cinema could take a break from the Edward Hooper diner homages. We get it now.

Ultimately, the Batman movie franchise is bound to our bat-tastes. And what era we grew up in Gotham. Some of us are Team Burton. Some of us are Team Nolan. Some are even pining to be Team Adam West (throw the Batman ’66 Batsignal into the skies for Ryan Reynold’s attention!). For the movie-going demographic that currently counts, this is technically only their second Bruce Wayne. They are on their George Lazenby and haven’t even seen their Roger Moore yet. There is an issue though with downsizing the comic book, dutch tilted DNA of the franchise. If director Matt Reeves wants to pare away the vamp camp of the piece then go wholeheartedly with the lesser villains who are neither. John Turturro’s Carmine Falcone is far more comic-book menacing than Dano’s Riddler. Partly because we believe he is Wayne’s senior (no Bat villain worth his Arkham salt should be younger than Wayne). And partly because he’s quite comic book already. This Riddler just emerges as a campus loner with good caligraphy skills and duct tape coupons. The cookie cutter Marvel films template can have some criticisms thrown at them, yet at least they embrace a Hollywood ethic and let the films have a bounce. Director Reeves cites 1970s American cinema as his inspiration, but the likes of Superman the Movie, Chinatown, The French Connection and The Godfather all understood about casting big names for big effect.

The binary reaction to all things bat is also tied to what we want from our onscreen comic-book epics. Do we want bleak un-escapism from our own Gotham hell times or do we want to don a purple zoot suit and order a totally distractionary Cesar Romero salad? Right now, this Team Burton bat-kid could do with a bit more colour to our comic-strip escapism. When Ridley Scott’s House of Gucci plays as more of a Batman movie than a new Dark Knight feature, maybe the real Bruce can let his cape down for a little Bat-dance now and then. 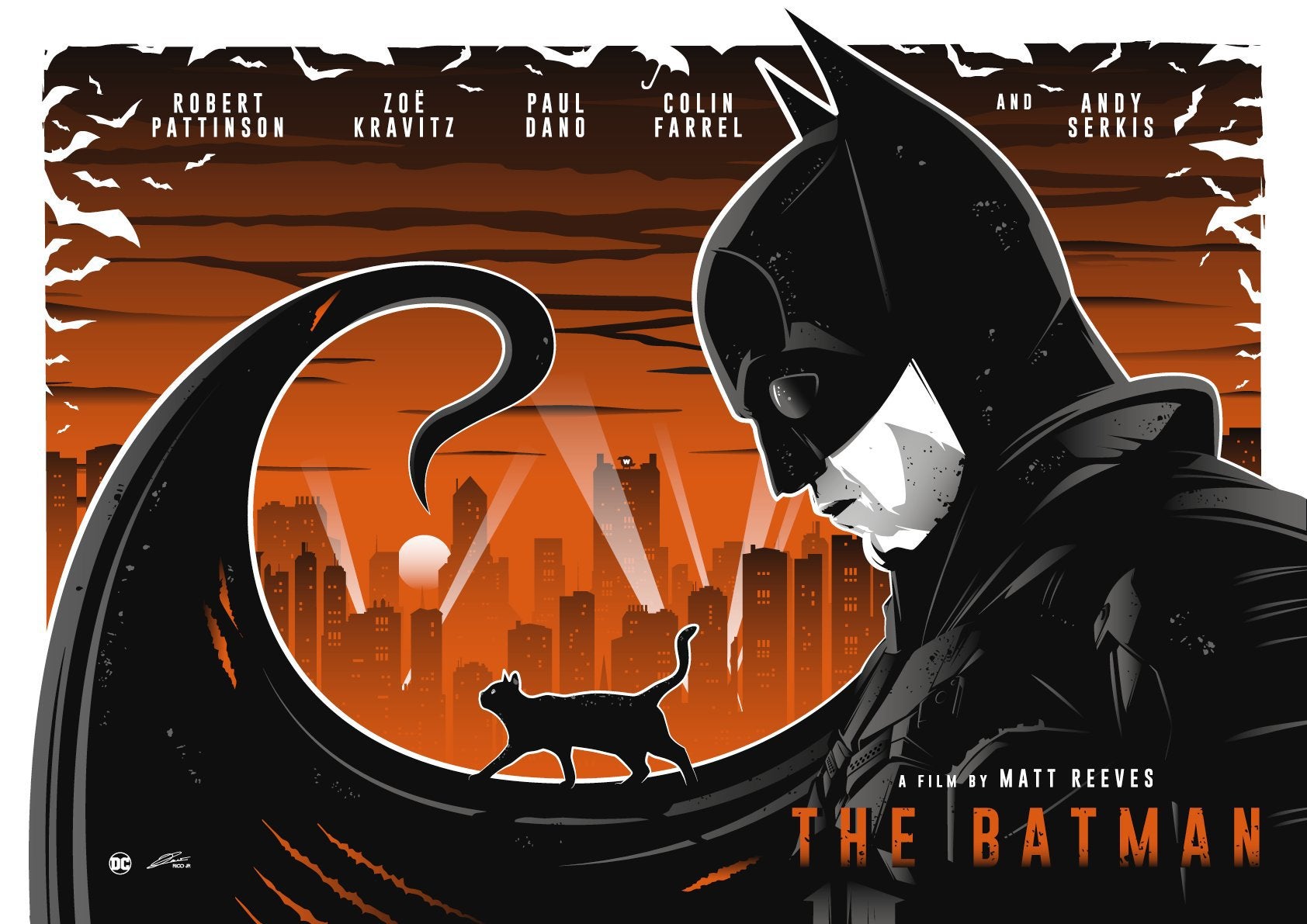