Netflix isn’t ruining cinema. When the patriarchies of our movie houses are governed by comic-book Pop-Noodles, faux gothic horrors, jukebox biopics for the tourists and reheated reboots, Netflix is quietly underpinning the personal commerce we have with cinema. As high street cinemas and multiplexes lose a grip on the very movie experience people pay their dollars for, Netflix remembers product, presentation and quality is key to audience engagement. Netflix knows moviegoers also want a sense of show – logos, lobby cards, artwork, likeminded titles, a video-store sense of library – not a selfie in the foyer with a cardboard Aquaman. Netflix is where Martin Scorsese is bringing his much awaited The Irishman, where the Coen Brothers feel confident enough to house a portmanteau western, where unseen and unfinished films from Orson Welles finally get presented, where good indie horrors find a momentum the multiplexes don’t care about, where titles like Bird Box and Black Mirror: Bandersnatch become virally discussed around the globe with great pop-culture fever, and where the nursery slopes can be found that helped showcase the director of the next Bond bullet, Cary Joji Fukunaga (Beasts of No Nation, Maniac).

And get over the ‘made for television’ stigma. First off, every film is ultimately made for television. Or certainly finds a final home there. When Kurt Russell’s The Christmas Chronicles gains 20 million streams in one week alone, that is not evidence of a viewing platform that is killing cinema with TV movies. Apparently, 20 million views are the rough, cyber equivalent of a $200m opening weekend. Netflix is fortifying movie exhibition, consumption and production. It is defending movie creativity, not slapping a CGI cape on it and hoping audience’s enthusiasms for existing material and characters will fill in the artistic gaps until hindsight and time downgrades the reactions.

However, one title that will not lose out to the passage of time, already feels like a classic of the decade and is possibly Netflix’s most effective, creatively romantic and exquisitely cinematic work to date is Alfonso Cuarón’s Roma. 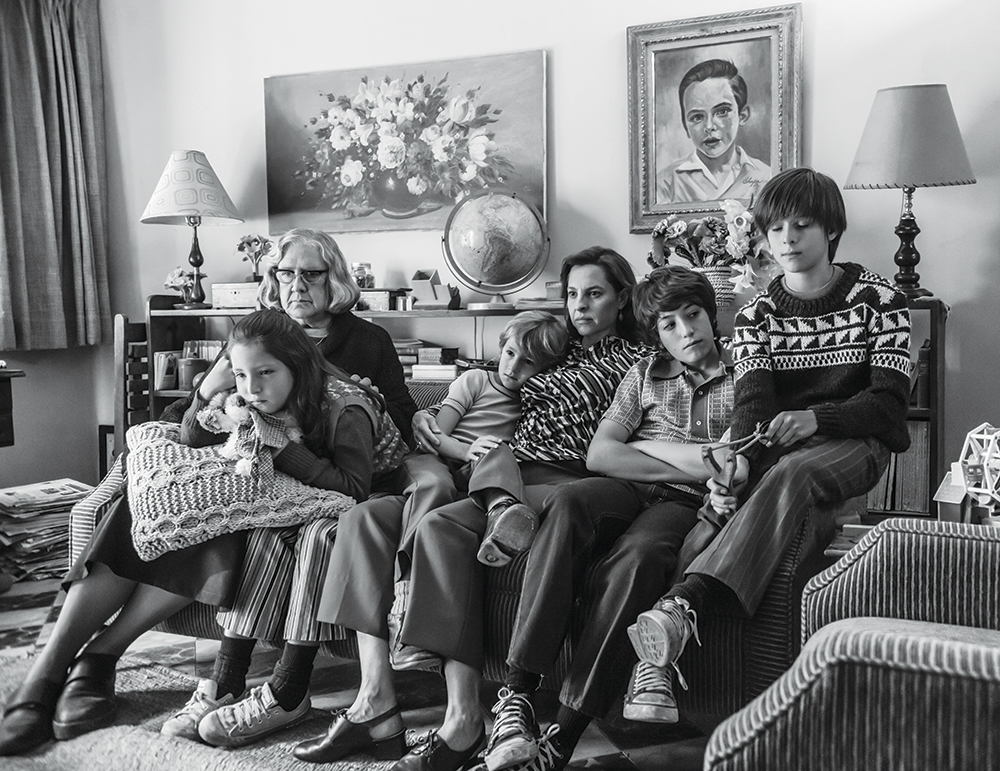 The sparse tale of Mixtec domestic Cleo in early ’70s Mexico, Roma details a year in the life of a nanny, a mother, a family, a suburb, a divorce, a childhood and a Ford Galaxie. It is also a poetically biographical look at Liboria ‘Libo’ Rodriguez – Cuarón’s own nanny. As demonstrations of love and loyalty to a mother figure go (Cuarón wrote, edit, produced, shot and directed this), Roma is an exquisite tribute that can already stand proudly alongside such childhood classics as The 400 Blows, Kes and E.T. The Extra Terrestrial.

Roma begins and ends with mundane chores flecked with reflections of passing planes and is graced throughout by a beguilingly humble and modest performance by newcomer Yalitza Aparicio as Cleo. Charged with minding the kids of a moody doctor and his initially icy wife, Cleo works long hours in a job

that leaves her on the periphery of a busy family when perhaps she herself needs one the most. Days off involve masterly tracking shots through bustling city streets, navigating the emotions of a breaking family with careful, non-judgmental distance, and stairwells become beautifully lit concrete hill-sides. But this is not an upstairs-downstairs tale of uncomfortable abuse and humiliation. Roma is not about poverty.

One of the instant aptitudes of Roma is how it avoids incident. When some children might be drowning on a beach, we are not sure if we should bring other films and their panics to the scene. Emotional reactions can be initially strange because Cuarón’s screenplay doesn’t pack the narrative with prejudice, hostility, and drama. When a last act street protest goes horrifically wrong, it is the screaming partner of a shot student and story stranger that sears the mind, not Cleo ducking for her life. When she is about to give birth in a bedding store, the next shot and its panicking dialogue is of multiple couples wending through a concourse – and each of them could be Cleo and her employer’s mother. Cuarón wants us to search his expansive frames. Sometimes we must link and project onto the story ourselves. Cuarón doesn’t set up an emotion in Roma. He knows the impact of a disappointment, a shock or a rejection is where Cleo’s story is. A good filmmaker knows the story is not where the action is, but the reaction. And a good actress like Yalitza Aparicio knows in turn that those reactions and thought processes do not have to be complete or tied to a banner for the audience. Roma finds its humanity and solace in the pat of a child, the privacy of a cinema, and a family of kids dousing New year flames in the woods. Roma carries its emotions forward but – unlike some of its fellow award season siblings – doesn’t wear them like suicide vests that can be set off when the story needs a ham-fisted beat or peak.

We are alone. No matter what they tell you, we woman are always alone.

Amidst the visual prowess of Roma is a stellar use of sound and existing music cues. Devoid of a traditional score, this is a film patched together with ’70s kitchen radio hits, hushed conversations, the chattering logic and bickering of good kids and the powerful dignity of a lead character who voices very little but hears everything.

The collection of tracks alone in Roma deserve their own Supporting Academy Award. Where else will you get a domestic poem to the powers and safety net of childhood sound-tracked by Roger Whittaker, The Tremeloes, Mexican covers of Neil Sedaka and The Animals, Juan Gabriel classics, Ray Conniff and Jesus Christ Superstar anthems?! And like Eugenio Caballero‘s astute production design which recreates Cuarón’s own Roma neighbourhood home, none of the music or design feels like a ‘70s period piece. A Mexico ’70 poster, old TV sitcom and boot cut jeans remind of the era, but this is not a Bohemian Rhapsody office-party sense of ‘70s with bad wigs, shoe-horned hits and a world that feels rented from a Greater London retro props store. If anything – and like very few visualists – looking to the past, Cuarón knows the early ‘70s’ affectations and design tics were as much about the mid- ‘60s and even earlier than glitter balls and platforms boots.

By avoiding movie clichés like all potential classics, Roma is also one of the most quietly striking films about cinema. From a dusty plain of martial arts trainees with their Bruce Lee fringes and flares to Doctor Zhivago-savvy crowd scenes, matriarchal frames and gestures that remind of The Color Purple, John Sturges’ Marooned (part of the inspiration for Cuarón’s Gravity) plays alongside La Grande Vadrouille at the town movie-house, and the kids toy gunplay is straight out of their morning matinees. Reminiscent in parts of Freddie Young’s work for David Lean and the Spielberg films it later inspired, Cuarón’s own photography is fiercely stunning throughout. Spielberg’s Empire of the Sun (1987) comes to mind throughout as Cleo traverses muddy townships, the liberation and protection of a car journey passing through lesser fortunate lives, boozy society parties in big houses, the ability of childhood to see the good in a bad moment, a kid is obsessed with being the pilot he already talks about being in past tense, and bigger forces outside the story cast their political shadows.

Whilst every now and then a frame feels like a film school lecture, that is perhaps because Roma will be a film school lecture for years to come. And we can overlook that. Images burn onto your mind like camera flashes your eyes cannot get rid of. Cleo will centrepiece a frame – but often the last detail we note within it. It is sometimes a monochrome world you wish some of the ’70s costumes weren’t always tied to. Yet, such is the depth and decision that settles on nearly every frame, colours emerge that aren’t there, shots wilfully outstay their natural welcome and Cuarón’s quiet panorama dramas reach far and wide on every cut.

As the final frame sees Cleo climbing towards the eternal promise of a sun-drenched future, Alfonso Cuarón has himself perhaps made a reassuring promise that the likes of Netflix can take a virtual studio lot to a new level of quality and expression. It certainly hasn’t yet showcased a title that values the written image as much as Roma.

Roma is now streaming on Netflix. 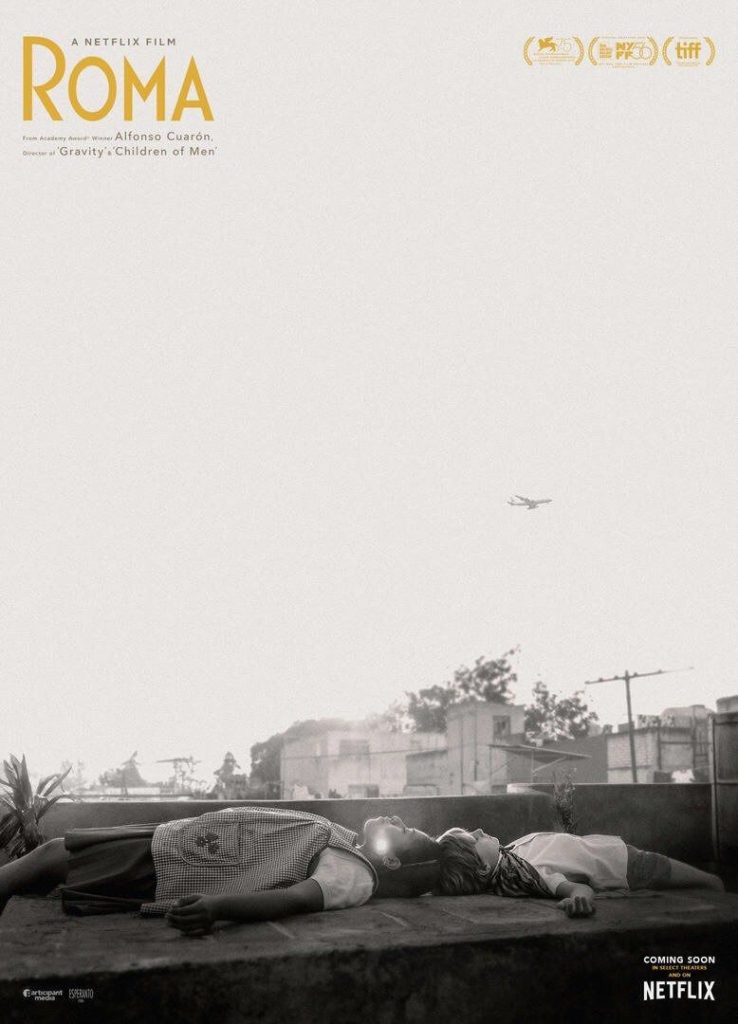