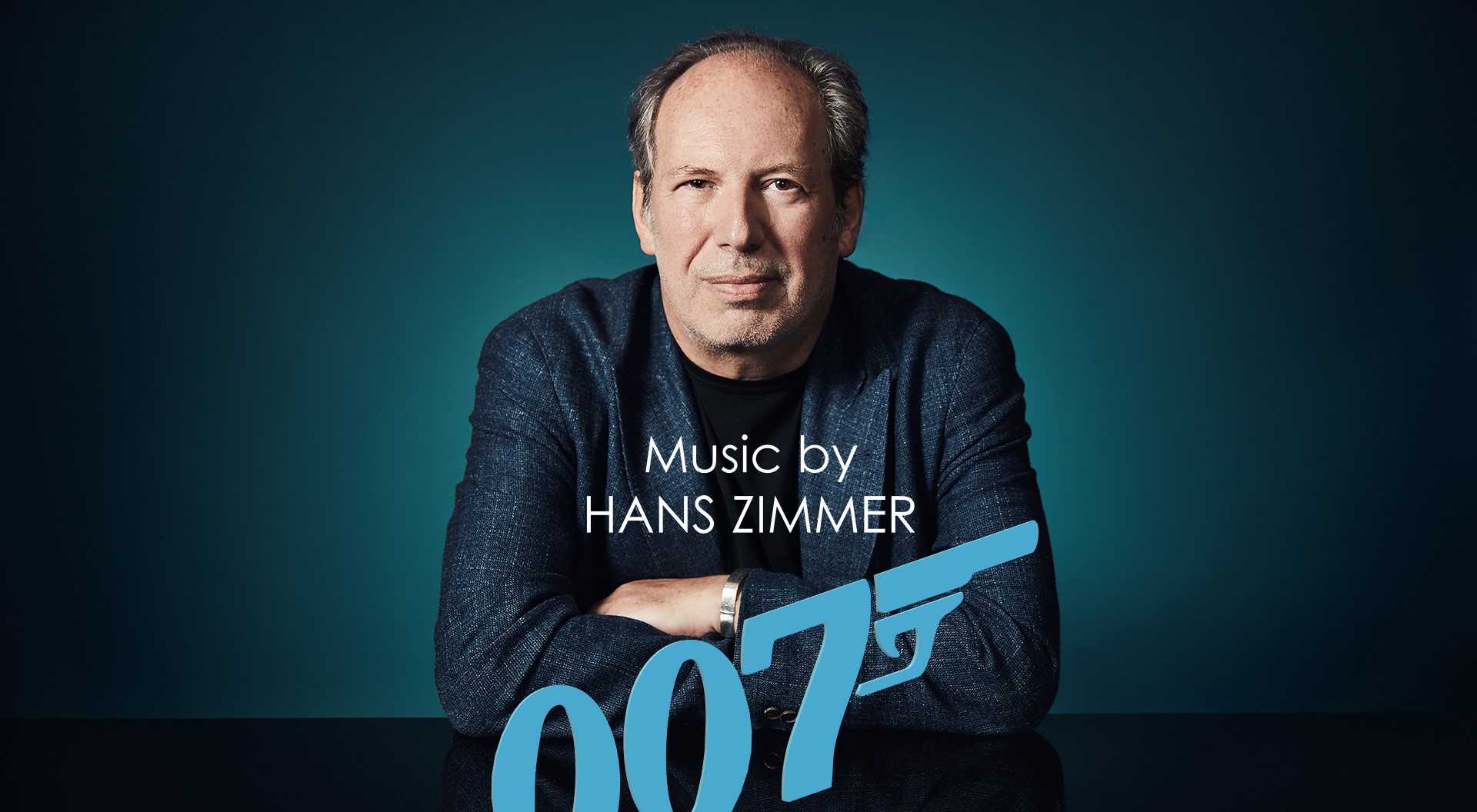 ‘I want to go and write music that announces to you that you can feel something. I don’t want to tell you what to feel, but I just want you to have the possibility of feeling something.’ 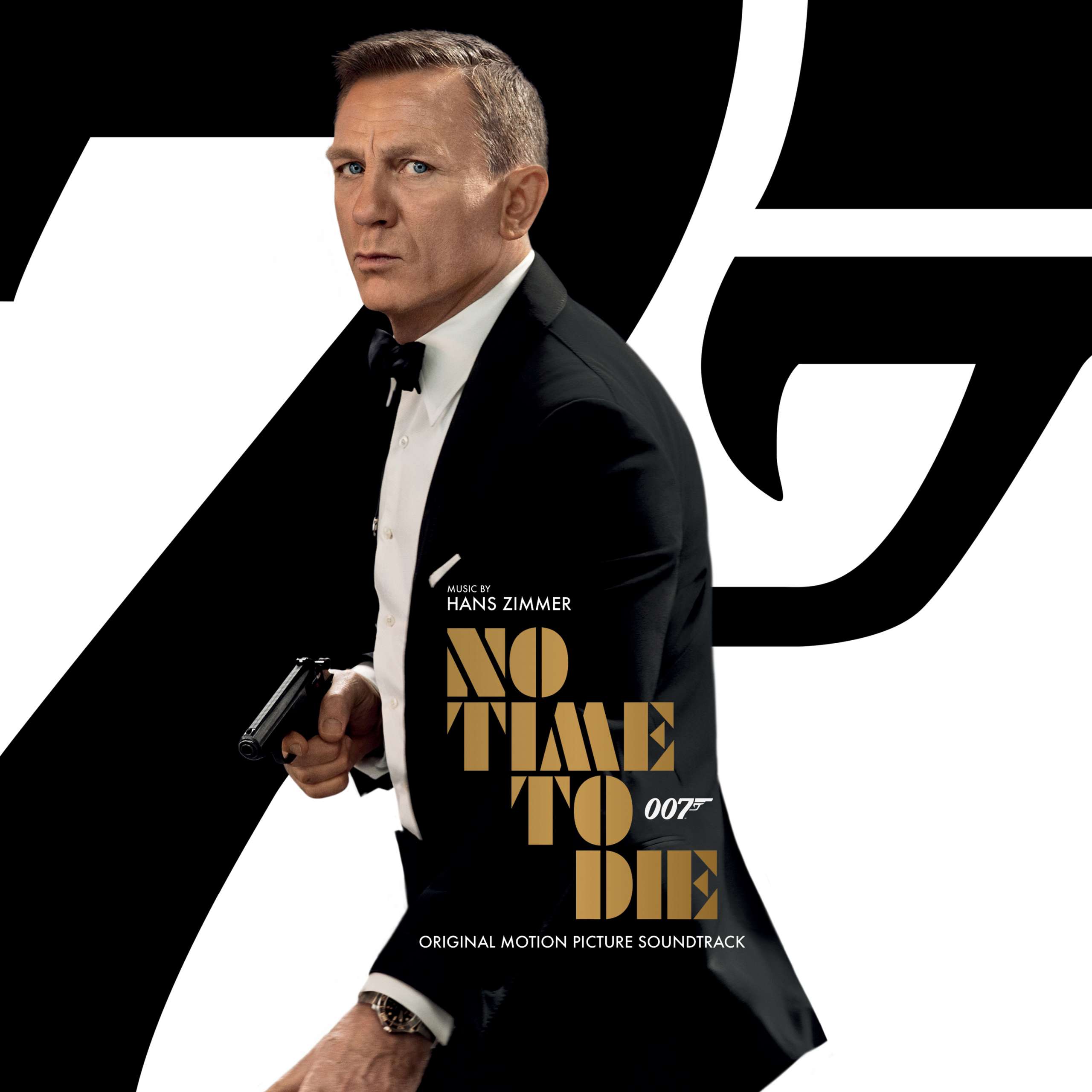 Going for Goldfinger! One of the biggest creative names in cinema boards No Time to Die as composer Hans Zimmer takes the cherished Bond baton and joins the Thunderball of Fame as the most prolific composer to score a 007 film. As Zimmer takes on the precarious mantle of ‘Not Being John Barry’, the Bond sound has now been put in accomplished, electric, loud but rather informed hands. Zimmer and his Remote Control Productions team had already been working with EON Productions on The Rhythm Section (2020) so it made easy sense he might take over from the previous composer Dan Romer who left production in 2019.

As one of the must-haves of movie composition, this Bond gig could well see Mr Zimmer not only give Bond a big, seriously big sound, this bullet catcher wonders too if the composer might also return to his earlier, less bombastic and more innovative scores (My Beautiful Launderette, Rain Man, Driving Miss Daisy and Thelma and Louise) for his Bond. He has a fan-pleasing reputation for scores of great symphonic might and programmed bombast. Yet, as his only Academy Award win to date (for 1994’s The Lion King) proves, his creative reach and scores soar more when they are personal, incidental and character-based but mixed with a bit of action – all ideal for Bond. The easy assumption is that Zimmer will make a massively pounding, percussion-exploding score along the lines of his work for X-Men: Dark Phoenix, Mission Impossible II, The Dark Knight Rises and Man of Steel. That is also a good fit for Bond and exactly what Zimmer must also bring to the 007 table. However, he is equally skilled at the smaller, intimate and often quirky scores – all vital for Bond too. His brief work for the new bullet’s trailer suggests old school reworkings as that theme pads into the room on the September 2020 trailer.

Smaller is where Zimmer started out – where the quirkily queer motifs of Prick up Your Ears (1987), The Fruit Machine (1988) and My Beautiful Launderette (1985) became the Hollywood-nudging intimacies of his Rain Man (1988) and Driving Miss Daisy (1989) cues. These last two scores alone helped define the cinematic sounds of the mid to late Eighties and represented real creative progression with the use of sometimes maligned synths as Zimmer moved the form forward after Giorgio Moroder almost singlehandedly progressed the use of the form in cinema – taking it away from Saturday morning cartoon cheese to poignant and melodic electronica that elevated many a movie title into a standard. Zimmer’s musical dressing for Rain Man alone took a simple, timeless story of brothers and difference and forged a contemporary classic Spielberg to this day still wished he had directed. Zimmer achieved similar with Black Rain (1989), Green Card (1990) and True Romance (1993). To a whole generation of movie goers and soundtrack lovers who grew up with those Varese Saraband score compilation cassettes of the early Nineties Hans Zimmer WAS their John Barry and John Williams. The legendary likes of Jerry Goldsmith and Elmer Bernstein may have ventured into electric-driven scores at the latter end of their careers. It is easily debatable that Zimmer was the one who took it forward – and to use the difference speeds and work rates that computers and technology modern composers now had at their disposal.

There are very few film composers whose output defines a sound for a world outside of the movie theatre. In very different eras of cinema and movie composition, the likes of John Barry and Hans Zimmer did just that. His True Romance cue has lived beyond the film. His Gladiator vocals with Lisa Gerrard underlined that turn of the century, chilled-listening sound and starred in many a chill out album mix. One could also argue his British queer cinema work of the Eighties almost foreshadowed a lot of dancefloor electronica that still defines the LGBT club scene. He certainly got there first with that Eighties queer culture tendency to mix both opera and synths – something Thomas Newman later incorporated into his Angels in America score. And a great majority of today’s young and new movie composers not only are produced, steered and even managed by Zimmer, he is one of the sounds of cinema today a generation of movie musicians aspire to.

‘The writing gets done away from the keyboard and away from the studio in my head, in solitude. And then I come in and hopefully have something, then I wrestle with sounds and picture all day long. But the ideas usually come from a more obscure place, like a conversation with a director, a still somebody shows you, or whatever.’
Hans Zimmer

Hans Zimmer is also stupidly prolific in the side-industries of movie music. He provided eleventh-hour synth programming work on Blade Runner 2049 score, he produced the score for the Academy Award winning The Last Emperor, he has received science industry awards for his career and – yes – he infamously scored a whole generation of British kids’ school holidays by creating the signature theme for that ever-strange Euro-minded TV gameshow, Going for Gold. The eleven-times Academy Award nominated tunesmith certainly has his work cut out this year. In 2020, Zimmer also scored Wonder Woman 1984, Top Gun: Maverick, Dune and The SpongeBob Movie: Sponge on the Run – all big retro minded franchise cinema needing those distinct retro-synth cues and sense of aural dressing. Throw in James Bond and that is one hell of a Christmas card list – even if 2020 meant half the titles became 2021 ones!

Yet, it’s worth noting Mr Zimmer had been hard at this score for a while pre lockdown. And the score and the film were completed and locked down as originally scheduled. Not only has he worked with Billie Eilish on the film’s opening title song with her producer/writer brother FINNEAS O’Connell, Zimmer is working on the soundtrack with The Smiths’ former legendary guitarist Johnny Marr. The pair have worked together before on The Amazing Spider-Man 2 and Inception. Marr is on guitar duties for his friend Hans on the No Time to Die score and with it brings a bit of old school mod edge and a rather charming guitar to the project. Marr was an oft-cited major influence on the Britpop likes of Oasis and The Stone Roses, often plays in Zimmer’s live concert events and nearly had a musical brush with Bond before – having joined The Pretenders in 1987 not long after they had recorded ‘Where Has Everybody Gone?’ and ‘If There Was a Man’ for 1987’s The Living Daylights. 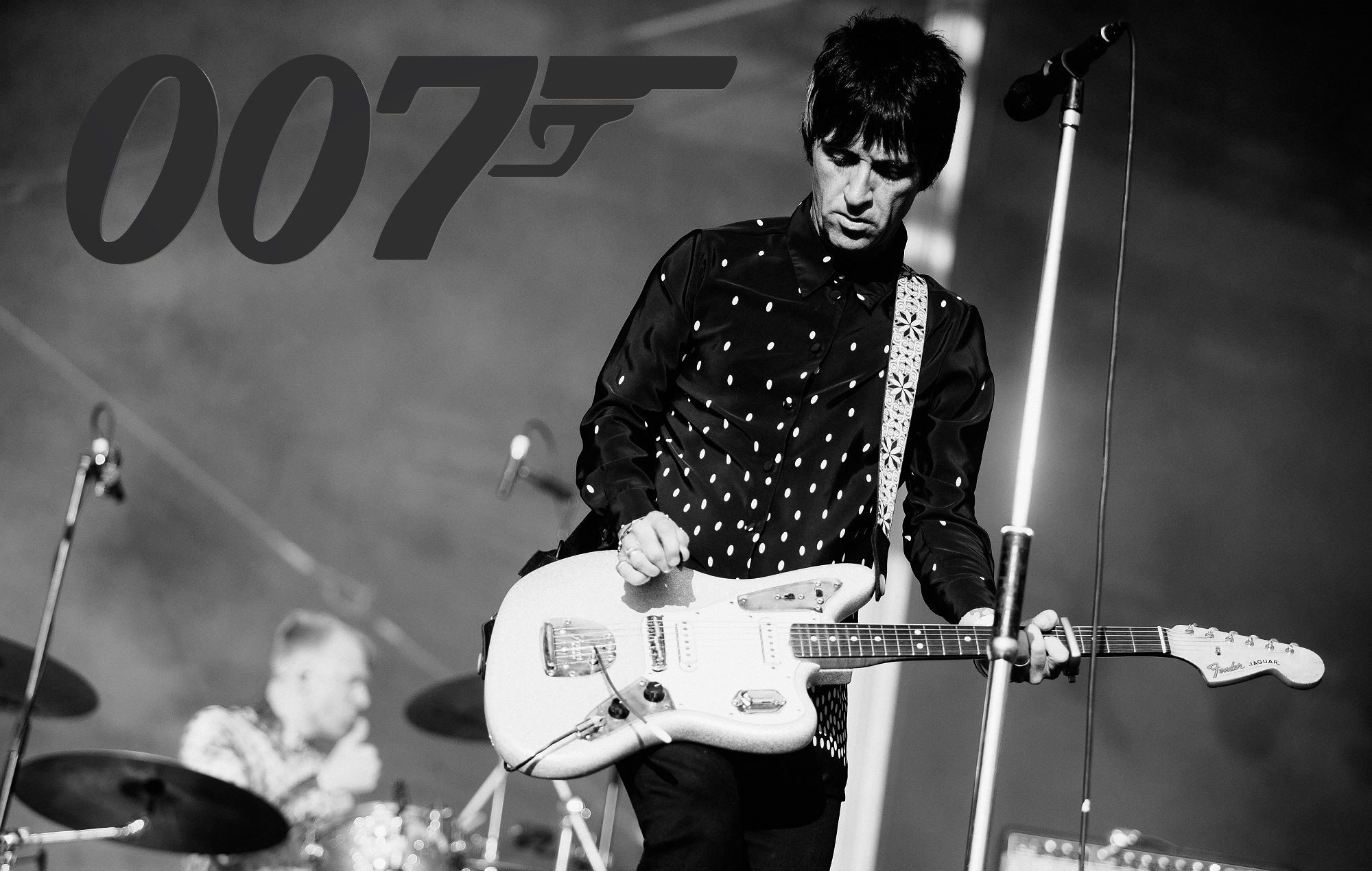 “Part of the legacy of the Bond films is iconic music, so I’m very happy to be bringing my guitar to No Time To Die.”

Whilst these new recent headlines suggest otherwise, Zimmer was working on No Time to Die in 2019. With the Easter 2020 release of the film [then] looming fast, Zimmer’s reputation as one of the world’s leading movie music producers with great production skills at turning a score around when there is literally no time left to die or indeed anything else also no doubt contributed to his eleventh-hour Bond tenure. Coming aboard projects with other composers fingerprints on the baton is nothing new to Zimmer. And to be fair, a great many composers from all levels either get replaced or do the replacing. Whilst the speed of turnaround is curious, this bullet catcher will also remind that someone like Zimmer has been mentally working on this score since he was a boy. Besides, after scoring Superman, X-Men, The Muppets, Hannibal Lecter, Batman, The Simpsons, Sherlock Holmes, Wonder Woman, Deckard, The Lone Ranger, Kung Fu Panda, Robert Langdon, Jack Sparrow, Maverick, Ethan Hunt, Spider Man and even Netflix’s Elizabeth II, it is high time [to die] that Hans Zimmer gets his baton on a Bond.

No Time to Die and its soundtrack including Billie Eilish’s title song is released across the world from November 13 2020. 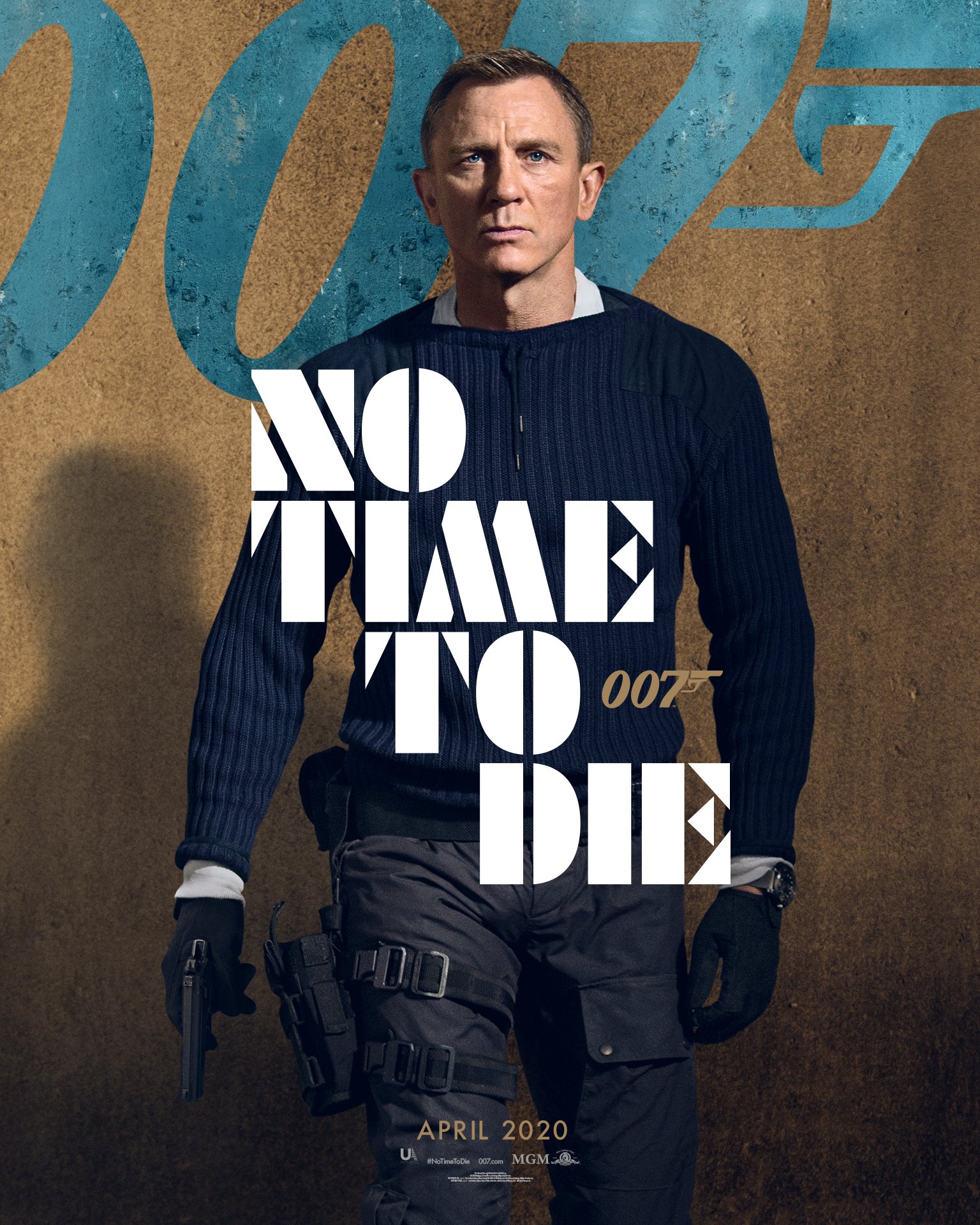 The original artwork for the soundtrack album before 2020 played a very different tune.