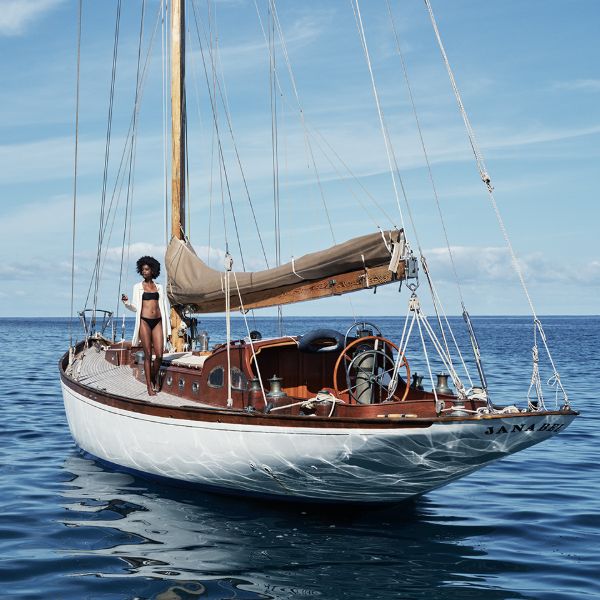 The history of James Bond’s onscreen look is also the history of Bond brands. Frank Foster, Lock & Co., Turnbull & Asser, Sunspel, Brioni, Anthony Sinclair, Tom Ford, Gucci, Jantzen, Floris, La Perla, Fila, Adidas, Bogner, Seiko, Barbour, Sanders & Sanders, Dents, Crockett & Jones, Dunhill, Orlebar Brown, Converse, Omega, Cartier, Guy Laroche, Nike, Church’s, Fred Perry, L’Oreal, Vuarnet, Slazenger, and even high street favourites Zara are all recent [and less recent] notches on 007’s bedpost of brands. The fashion industry particularly has been wise to the pull and allure of Bond since the ’60s – with many brand names willing to kill to licence a new era of Bond clothing. As Dressed to Kill: James Bond – The Suited Hero (Flammarion, 1996) rightfully reminded back during the heat of Britpop when Bond’s vintage veneer was crucial – this is nothing new. UK chain Burton created a ‘Styled for Bond’ clothing campaign five decades ago, Bally proudly touted a ‘007’ leather shoe range, ’60s issues of GQ magazine, Playboy and their ilk ran constant articles about the style and aspiration of Bond clothing, high street brands like Jaegar would adorn their ’60s and ’70s catalogues with Bond-minded imagery, Colgate-Palmolive had their ‘007’ cologne, Noveltex released their ‘James Bond’ shirt, the ’60s spy-mania triggered Pelaco’s Bond shirts and suits in Australia, Ernest Hiller touted ‘The James Bond 007 suit’, France’s Boussac textile company launched an ensemble of ‘James Bond’ shirts, coats, shirts and towelling, and ‘007’ silk ties, swim-wear, night-wear, day-wear and footwear would be readily available to all. Heck, two Bonds so far – Roger Moore and George Lazenby – even initially came from a modelling and clothing commerce background (and some of the others just kept quiet that they did). And in the early ’60s Bond creator Ian Fleming himself once even played ‘M’ for a Bond clothing photospread for the French men’s magazine, Adam. Fleming was not against a bit of brand-wear usage and association. His favoured Sunspel polo shirts were a constant of his Jamaican writing days – and often with that Riviera style crafted in Sea Island cotton that Daniel Craig later sports in 2006’s Casino Royale.

However, when it comes to James Bond artists, names such as composer John Barry, designer Ken Adam and editor Peter Hunt are a given – rightfully etched in pop-culture stone forever more. But are names such as Tessa Welborn, Elsa Fennell, Marjory Cornelius, Julie Harris, Elizabeth Waller, Emma Porteous, Lindy Hemming, Jany Temime and Suttirat Anne Larlarb just as familiar? They should be. Because for every time a James Bond film was scored by Barry, housed by Adam or cut by Hunt, he was wearing the wardrobe choices of those and 007’s other mistresses of costume. For nearly seven decades, the history of Bond onscreen has also been the history of costume design of female tailoring. Yet, that tailoring has not always spilled out from the soundstage and big screen to the high street – enabling women audiences to savour, sample and participate in that sartorial relationship 007 has always had with his clothing marques. It hasn’t always been a retail mission actually mindful of women, their markets and their fandom. Until now.

As Bond’s twenty-fifth bullet No Time to Die continues shooting towards its hopeful November 2020 theatrical release, it makes total sense that one of those historic, yet new era-minded brands N. Peal should now release their newest 007 Cashmere Collection with an eye on the female market – including pieces from the new film as worn by Bond’s newest cohorts and designed by Bond’s newest sartorial wrangler, Suttirat Anne Larlarb. As the UK’s captains of cashmere since 1936, N. Peal have an ongoing relationship with the Daniel Craig era of Bond – partly triggered by costume designer Jany Temime wanting to find winter-minded attire that matched the sharp blue teal of the actor’s distinct eyes for Skyfall. Already, the trigger for this new collaboration can be traced back to the artistry of a costume designer. N. Peal provided the Oxford Round Neck Cashmere Sweater for Skyfall (2012), the Turtle Neck Sweater for Spectre and the famous Fine Gauge Mock Turtle Neck Sweater for the Spectre teaser poster. In partnership with the House of Bond’s EON Productions and costume designer Suttirat Anne Larlarb, Double-0 seven new pieces have been designed for the Bond women and girls out there. Taking the work of those lesser referenced yesteryear Bond costumiers and wardrobe agents, as well as the clothing minds furnishing the Daniel Craig era, N. Peal and Larlarb have created an ensemble that celebrates Bond women – their past and present.

“When you are dealing with the number of decisions you have to make on a Bond film, with so many important characters and so many vital items of clothing, having a collaboration like the one we had with N.Peal was a godsend.”

This is the Bond woman of the ’60s and ’70s with a shading of 2020 and Lea Seydoux’s fateful Madeleine Swann. This is both a retro and contemporary minded Bond with a clothing timeline that reflects how – unlike the male Bond looks – the female looks don’t always age in Bond. They ripen. There are plenty of men who wouldn’t actually wear Roger Moore’s flared 1977 look on their streets today. That is not the same however for the women when it comes to the looks that, say, Barbara Bach wore in the same era. Add to that how the Bond series has not just featured the most high-end looks for women, but actually some of the strongest fashion faces and characters to wear them. Maud Adams, Britt Ekland, Carole Bouquet, Monica Bellucci, Sophie Marceau, Jane Seymour, Grace Jones, Ursula Andress, Kristina Wayborn, Lois Chiles and Claudine Auger all have the DNA of high-end fashion photography and commerce mixed in with their Bond connections.

In association with EON Productions and their archives, N. Peal have looked beyond the instant iconography of 007 to celebrate, re-imagine and provide pieces and looks that sixty years of ardent 007 women. This is not office party Bond. This is not cosplay. This is a collection that knows Pussy Galore’s slim-lined tailored jacket from Goldfinger does not just scream the blueprint of Sixties Bond women, but an intrinsically mod-culture look that has rarely left British clothing. Likewise, the ’70s cuts of Lois Chiles’s Moonraker looks scream a transatlantic, Concorde age of international travel and glamour without being cosplay twee. With an emphasis on ‘inspired by’ rather than exact costume copies (which are impossible to match for fabric, material, historic, cost and practical reasons), N. Peal have studied the feminine cut, shape and purpose of the Bond women. As a women’s clothing favourite that has counted Sophia Loren, Kate Middleton, Princess Grace of Monaco, Ava Gardner and Elizabeth Taylor as customers, this is something N. Peal are highly alert to. 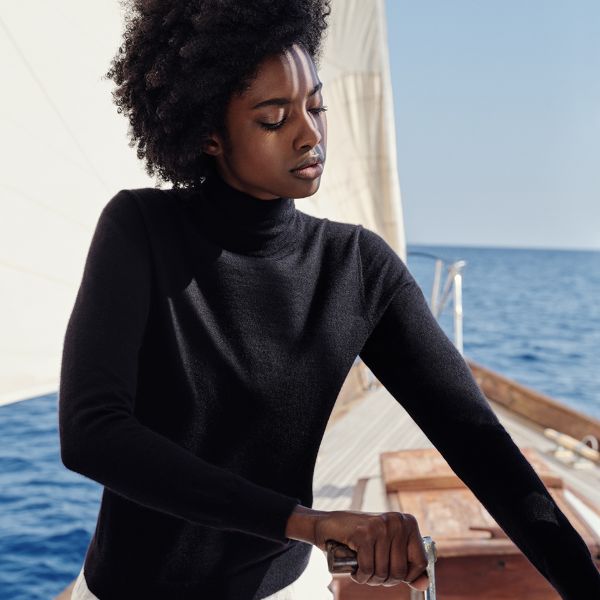 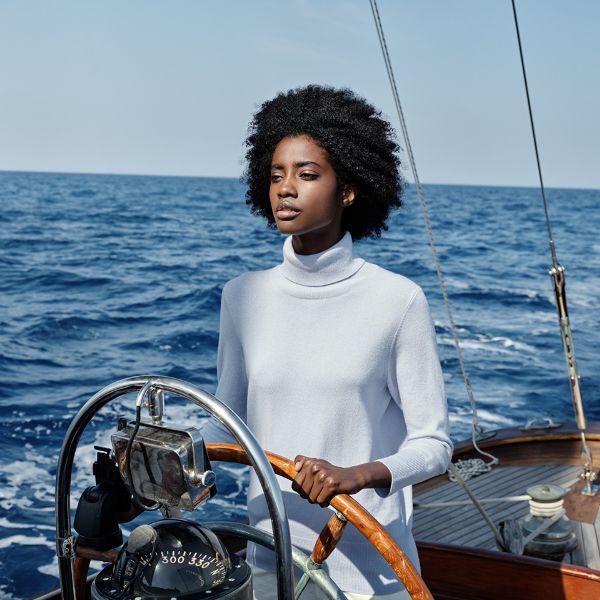 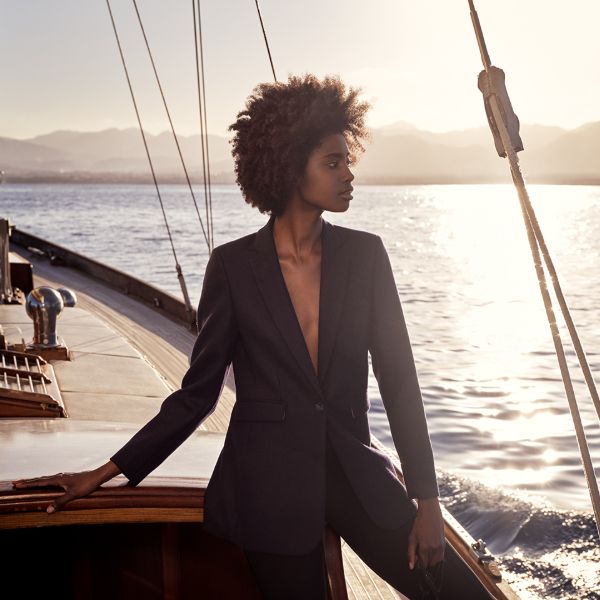 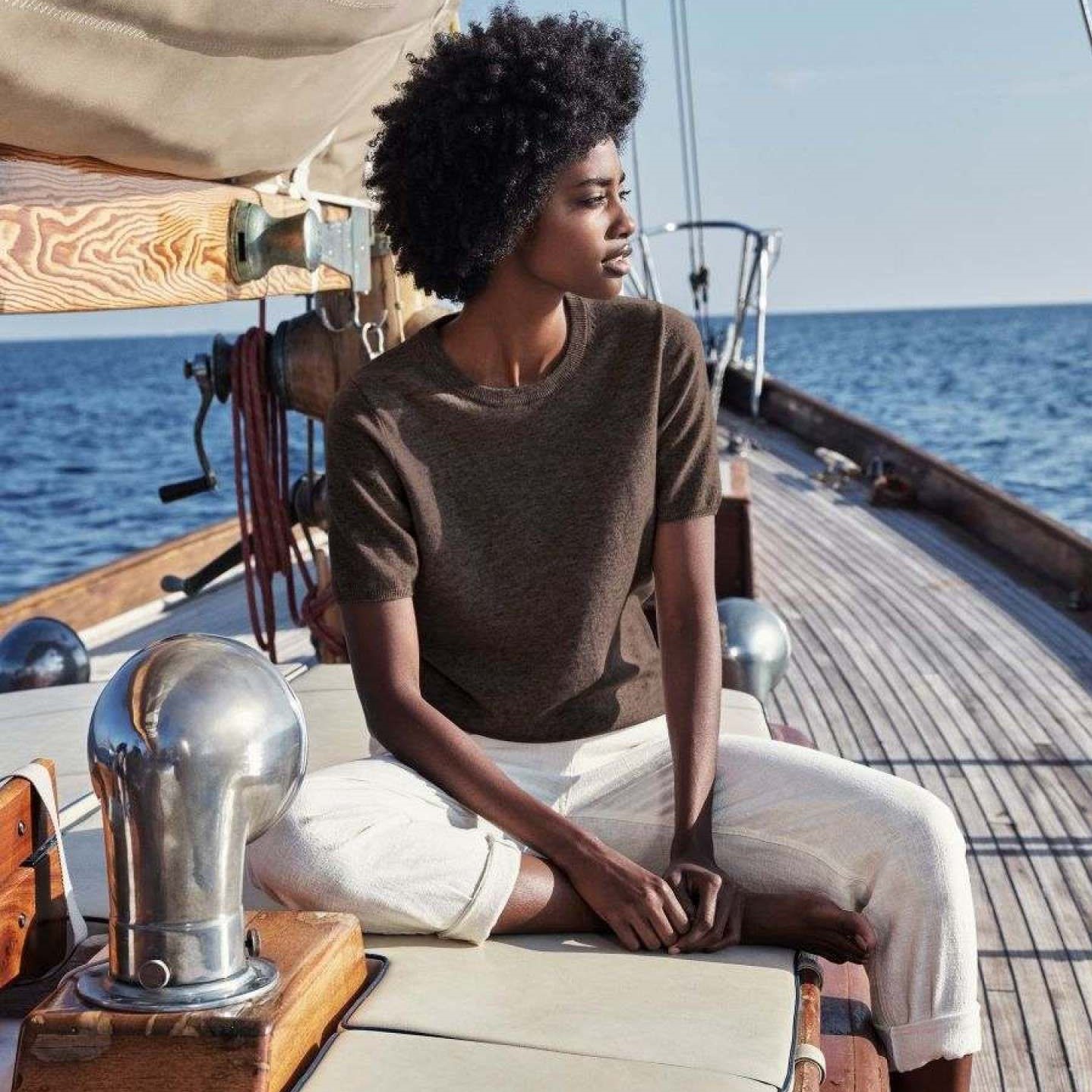 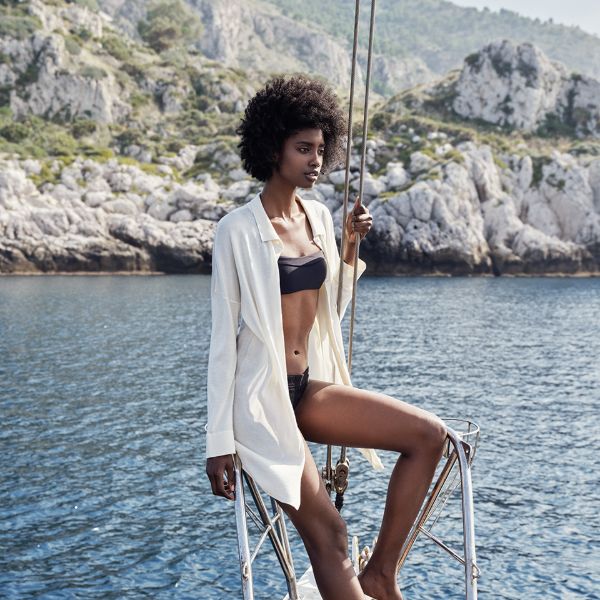 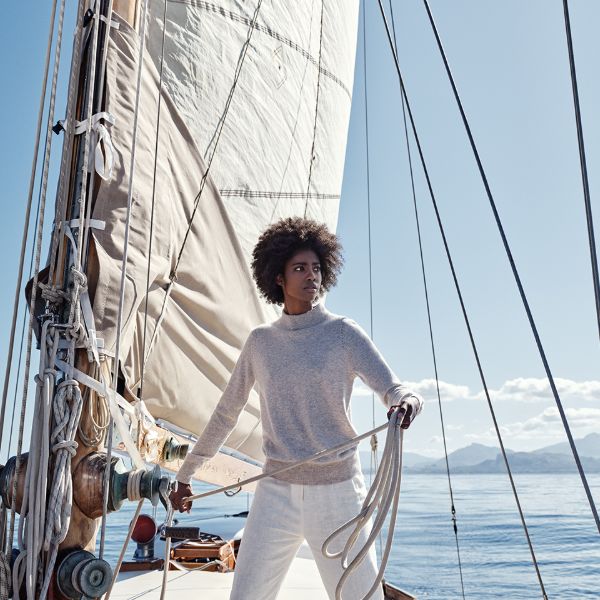 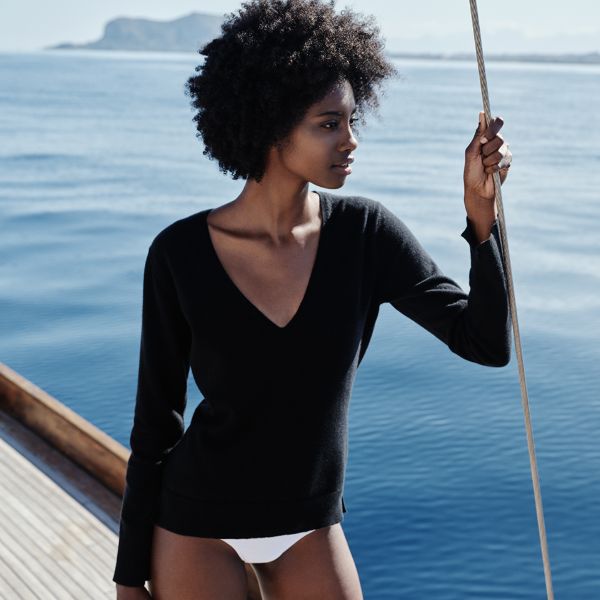 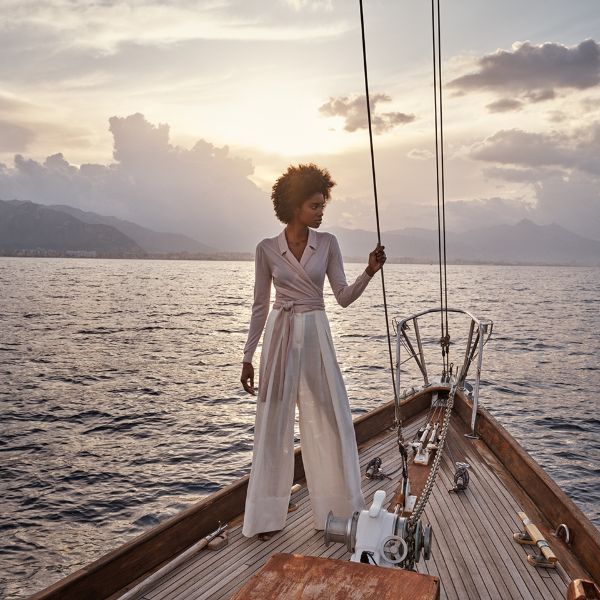 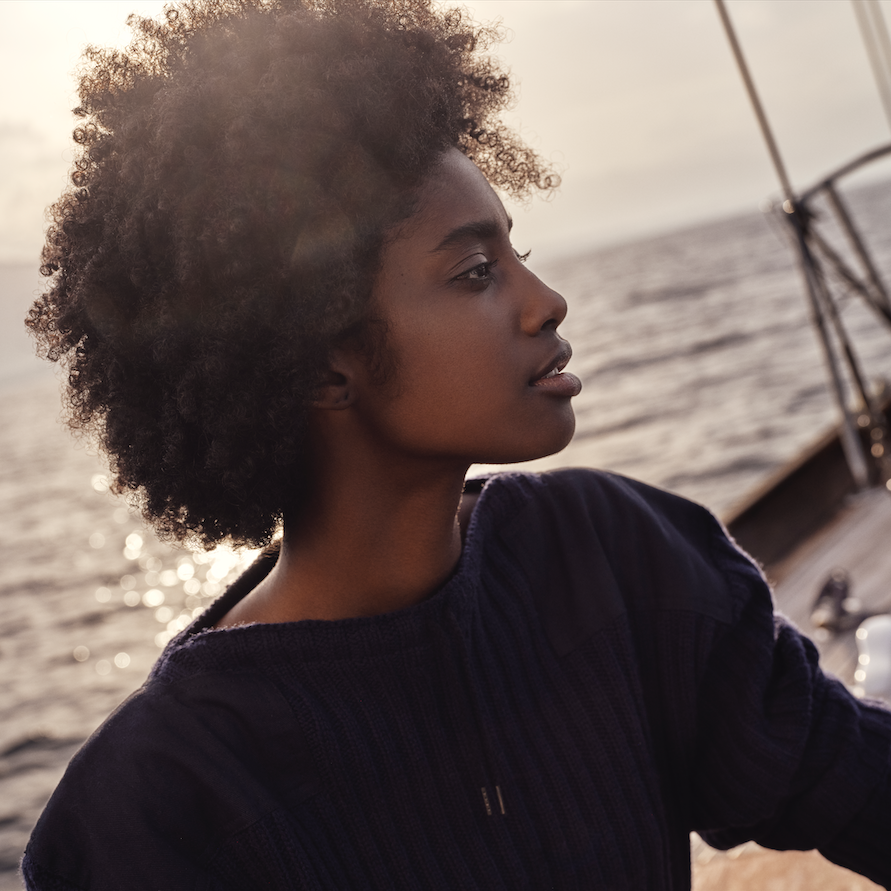 The N. Peal 007 Cashmere Collection is available now from N. Peal and the 007 Store.