‘Have you broken something?’

‘Only my tailor’s heart.’

A safari jacket, a towelling onesie, a ruffled white dress shirt soaked by the sea, a Bahamian collared shirt, mid-’60s swim wear, sky blue beach shorts, a salmon pink linen shirt and some nifty polo tops… the history of Bond movies has always been the history of men’s fashion. Often the envy-making wish-list of many a movie fan aware of their OO7 costume design accessories, tailoring, style and excess the towelling onesie from 1964’s Goldfinger, the salmon pink shorts from 1965’s Thunderball, Daniel Craig’s swim shorts from 2012’s Skyfall or the safari suit from 1974’s The Man with the Golden Gun have long been much talked about wants for Bond and movie fans the world over. However, apart from perhaps some office party OO7 excess and near-match lookalikes, most Bond fans were kept at a tailored arm’s length from adding these to the wardrobe. But unlike Roger Moore’s lapels, George Lazenby’s pleats and Sean Connery’s early penchant for towelling ensembles when in the hottest climes, those clothing dreams are no longer a thing of the past.

In collaboration with men’s clothing line Orlebar Brown and EON Productions comes a dreamy array of OO7 sartorial greatness, retro cuts, vintage seams, resort shirts, jet-set stitching, Med nostalgia and pure Bond movie costume design brilliance. Launching in May 2019, this new cast list of clothing is on a limited collection status, but readily available for the summer season and beyond. Each piece is invested with the history, locations and swagger of a vintage era of Bond stretching from Dr. No through to A View to a Kill with a twist of Skyfall to keep our man Daniel in the loop. This newest, wider 007 collection inspired by the golden age of Bond is a masterful, cool, kitsch and decidedly envy-making array of spy-shaped togs. Fifteen new pieces of clothing make up the James Bond Capsule collection – and add to the first wave of 007 Bulldog swim shorts launched by OB in the summer of 2018. And whilst some of the price tags are worthy of a real Goldfinger, this new cast list of official James Bond Exclusives clothing is beyond delicious, cannily inspired, slickly produced and worth every Moneypenny. 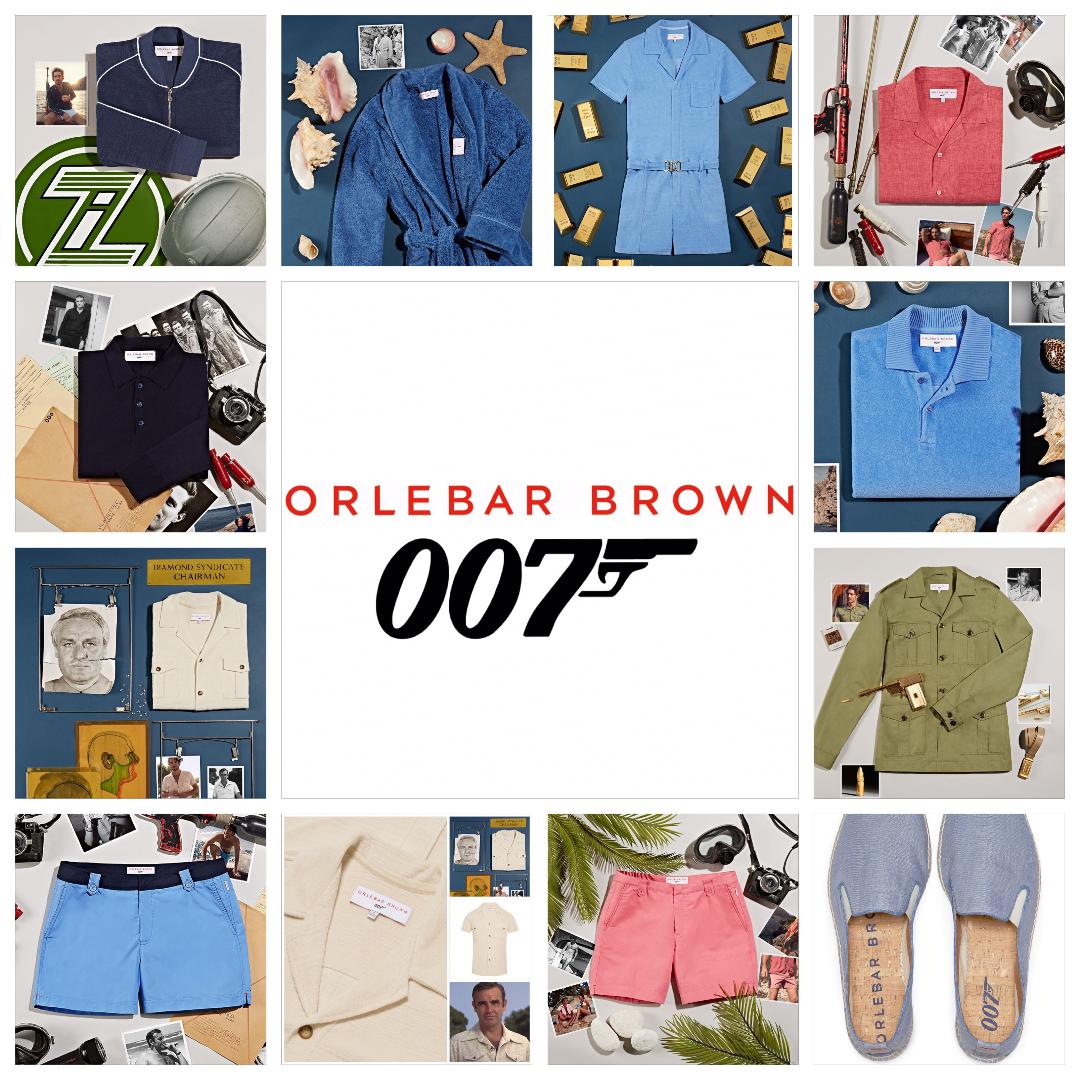 Bond and Orlebar Brown is an apt marriage. In a 2018 From Tailors With Love interview the company’s CEO Adam Brown suggested how “a picture of Sean Connery in baby blue towelling in some of the beach scenes were on the original mood boards when I first had the idea for Orlebar Brown”. The cut, poise and sense of Bond’s ’60s jet-age glamour is all over OB’s swim wear, shirts and accessories. The cut and hues of their beach wear is often pinned to a ’60s Miami-bound ethic – with short hems, flat panels and bold beach boy colouring. And this is not just an ‘inspired by’ collaboration. Daniel Craig famously wore Orlebar Brown’s Setter Sky blue shorts for 2012’s Skyfall. OB already has its own history with 007. Like the Bond series itself, there is both a wilful playfulness, sense of luxury, one eye on the past and contemporary style to Orlebar Brown. The fifteen new pieces are aspirational on many levels – and coyly both cool and kitsch (did anyone ever expect to legitimately be able to ever buy a genuine Roger safari suit jacket inspired by The Man with the Golden Gun?!). Simple lines, Caribbean pastels, decade-defining leisure wear and a sense of movie fun define these new lines (again, did anyone every expect to legitimately be able to ever buy a genuine Roger Moore tracksuit top as seen in Max Zorin’s chateau circa 1985?!).

INSPIRED BY THE PAST. CREATED FOR TODAY. 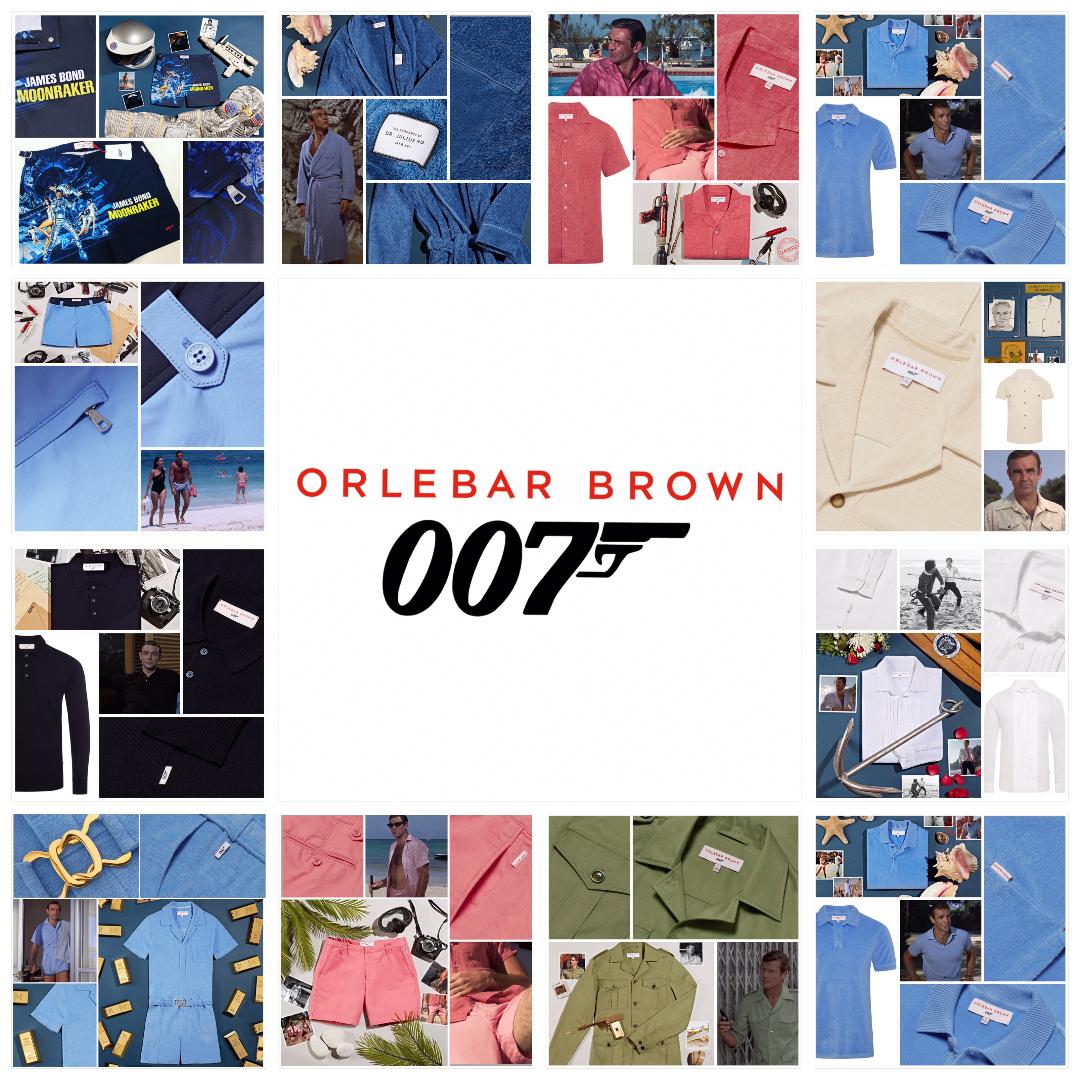 Framed by the summer leanings of OB with a definite leaning to the Bond-mania togs of 1965’s Thunderball , a fresh awareness that the cuts and specs of the male physique have possibly changed since 1962 and aptly timed to coincide with the news that Bond 25 kicks off with Daniel Craig’s 007 relaxing in Jamaica and all the movie, literary and sun-drenched finery that alludes to, the James Bond Capsule line is available from May 2019. This is not fancy dress Bond. This is not camp Bond for the office party. These new pieces are wholly contemporary and designed and cut with 2019 and its shark-flecked beaches in mind. These designs are also not 100% allayed to OO7. They have a life away from the filmic fantasy. Okay, the infamous Goldfinger onesie and Roger’s Safari Suit Jacket is nothing but retro bold in the best way possible. To make a green ’70s safari suit jacket look respectable and not like your eccentric great aunt has come visiting from an old Polaroid photo is no mean feat (although having Justice Joslin as your model and Bond photographer Greg Williams has greatly helped OB here!) . And that updating is achieved by re-shaping and re-cutting those cinematically iconic looks. OB’s eye is on both today and Bond, but also current sartorial pulls, deliberately tight tailoring, short shorts and a ’60s Bond mania awareness of colours, seams, lighting and luxury. In June 2019 two later pieces were added to the Capsule Collection rail – Skyfall‘s Riviera trunks and Connery’s Fontainebleu Hotel poolside shorts from Goldfinger.

Having asked Mary Goodnight to step aside, this bullet catcher has opened the wardrobe for a look… 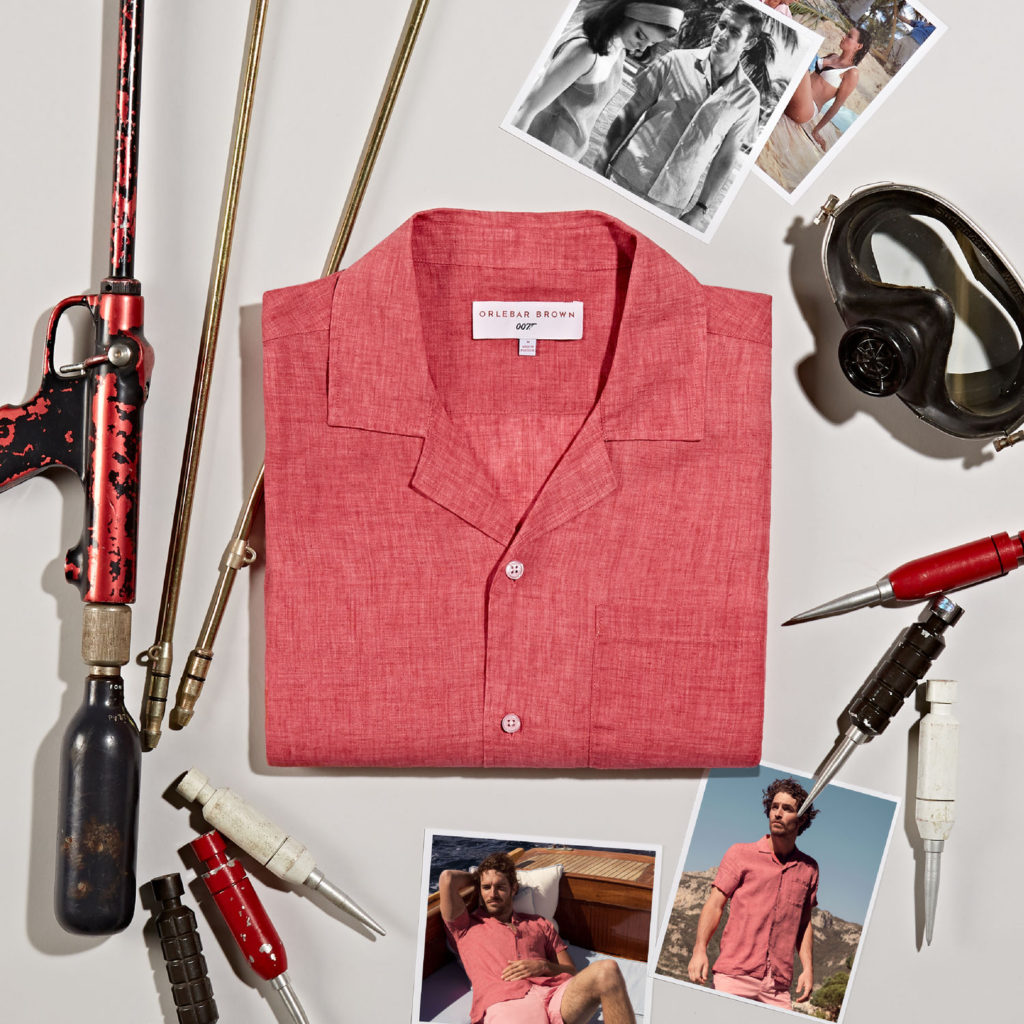 Bond reworks his swim shorts for lunch-appropriate attire by adding a shirt like this fine Italian linen style for a bite to eat with Domino in Thunderball (1965).

A warm-weather twist on an elegant evening shirt based on the style worn by Bond when he comes to Tracy’s aid in On Her Majesty’s Secret Service (1969). 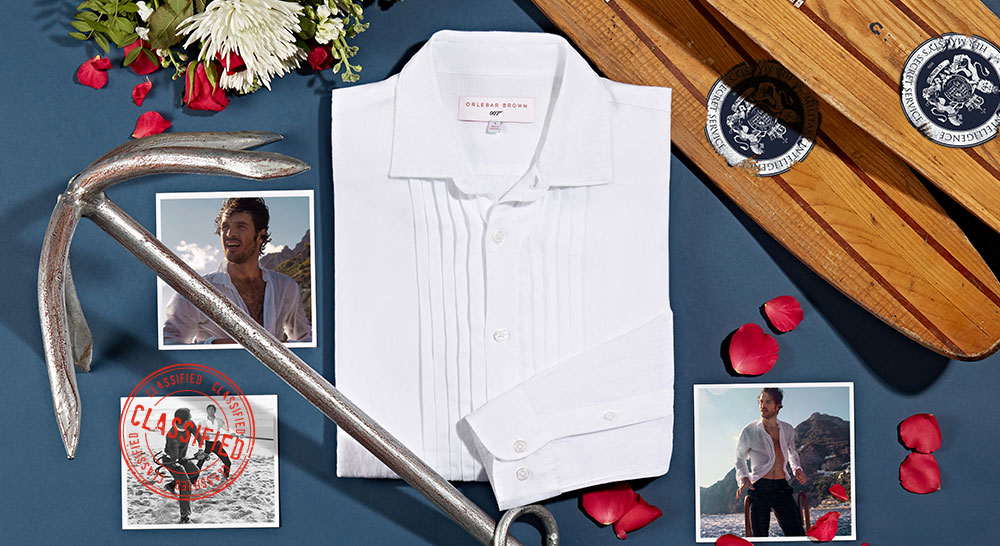 Inspired by the style worn by Bond when he finds Marie to help him locate Blofeld in Diamonds Are Forever (1971), this men’s cotton towelling short-sleeved shirt with imitation horn buttons and military style pockets.

Bond wore a similar polo to investigate Largo’s Palmyra estate under the cover of night in Thunderball (1965). However, this Italian-made version made from luxuriously soft Merino with chevron racked rib detail and imitation mother of pearl buttons is too good not to be seen in the light. 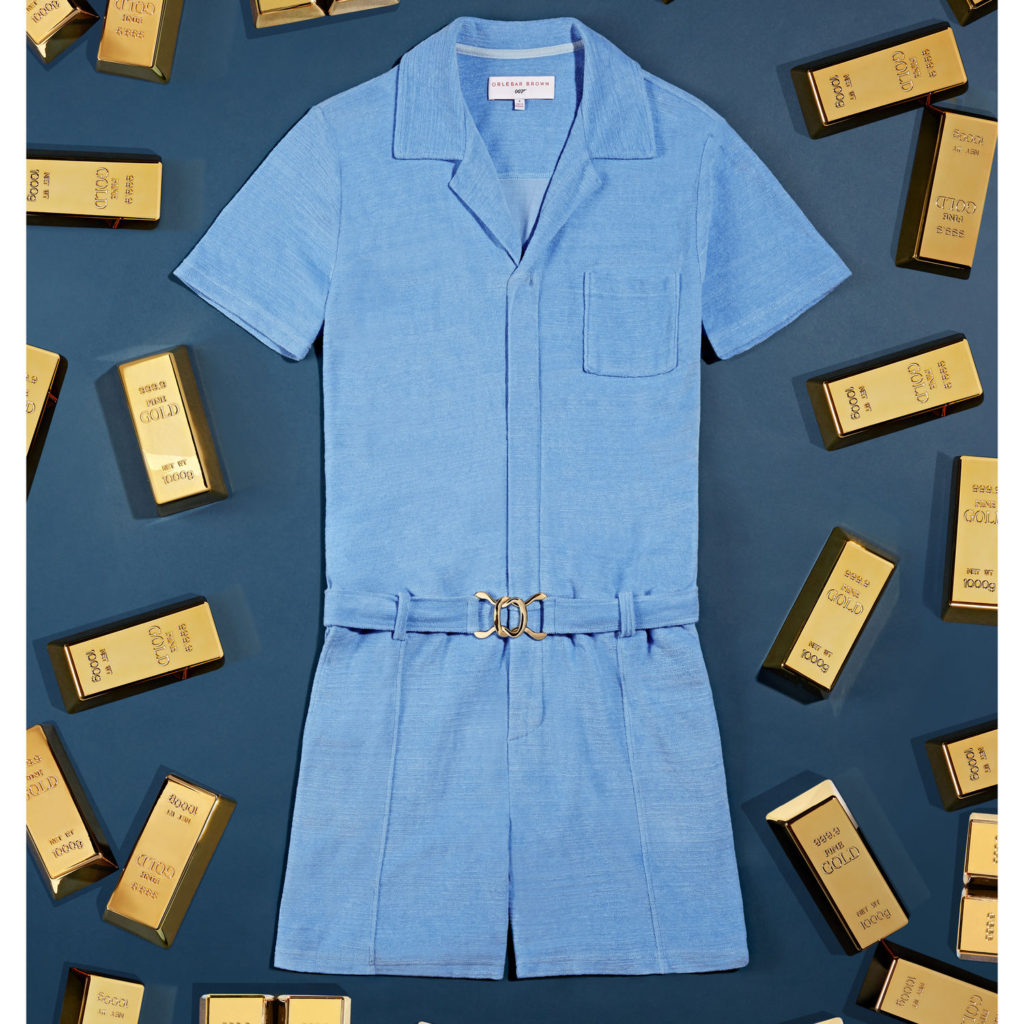 Perhaps the centre-piece of this collection and certainly one of the most mentally sought after pieces of Bond clothing for many a 007 scholar, this men’s beach all-in-one was inspired by a similar style worn by Bond to investigate Goldfinger’s suite at the Fontainebleau Hotel in Miami in Goldfinger (1964) and uses Olebar Brown’s signature cotton towelling with self-fabric belt and fastened by a gold-effect clasp.

THE MAN WITH THE GOLDEN GUN SAFARI JACKET

This lightweight jacket takes cues from the military style worn by Bond to a kickboxing match for a meeting with Scaramanga in The Man With The Golden Gun (1974). 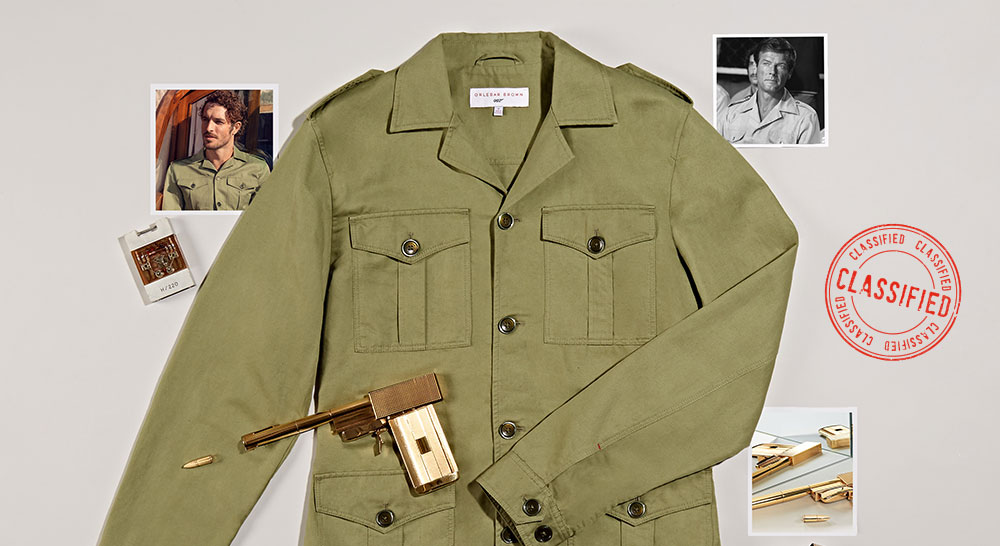 These breathable men’s cotton-linen shorts were inspired by those worn by Bond for a date with Domino on the beach in Thunderball (1965).

Take Bond’s lead on beach style by opting for this men’s cotton towelling polo inspired by the one he wore when he first encounters Honey Ryder on Crab Key Beach, Jamaica in Dr. No (1962). 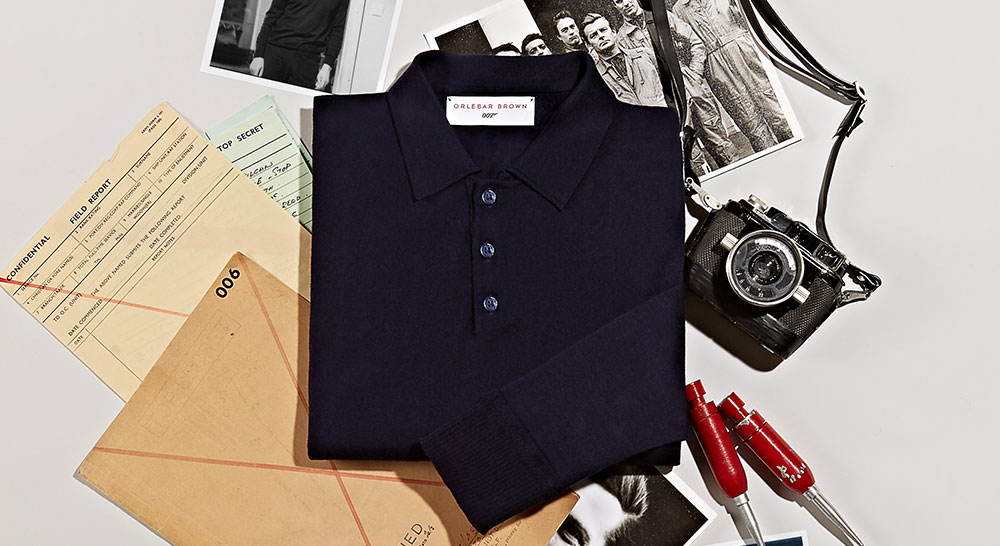 Made traditionally in Spain for authenticity, these men’s canvas espadrilles were inspired by those worn by Bond when he returns to his hotel room and encounters Felix Leiter in Thunderball (1965).

A VIEW TO A KILL JACKET

This men’s towelling bomber jacket with contrast white piping was inspired by the jacket worn by Bond when he discovers an underground laboratory at Max Zorin’s stud farm in A View to a Kill (1985). 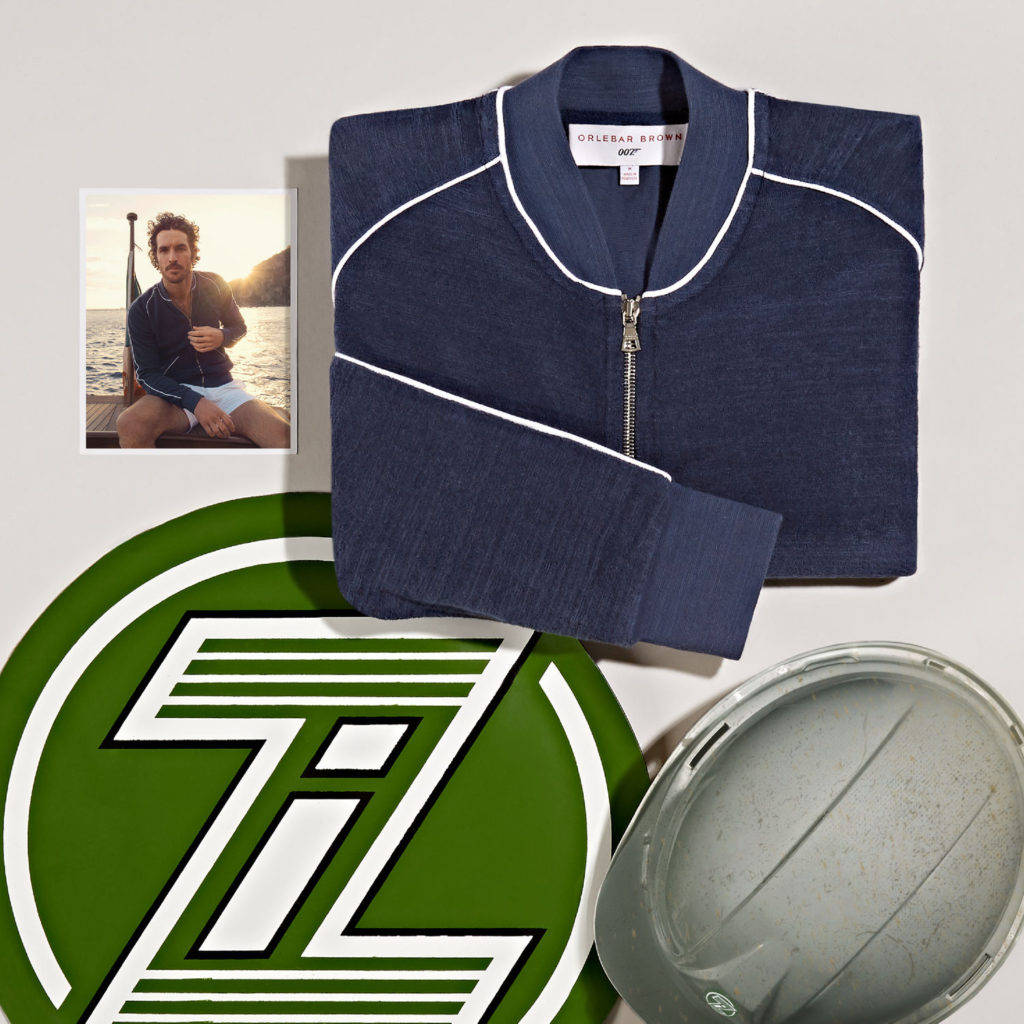 A towelling robe with an internal woven label reading ‘The Property of Dr. Julius No, Crab Key,’ recalling a scene from Dr. No (1962) where Bond and Honey Ryder are captured and held at Dr. No’s headquarters before being given similar robes. 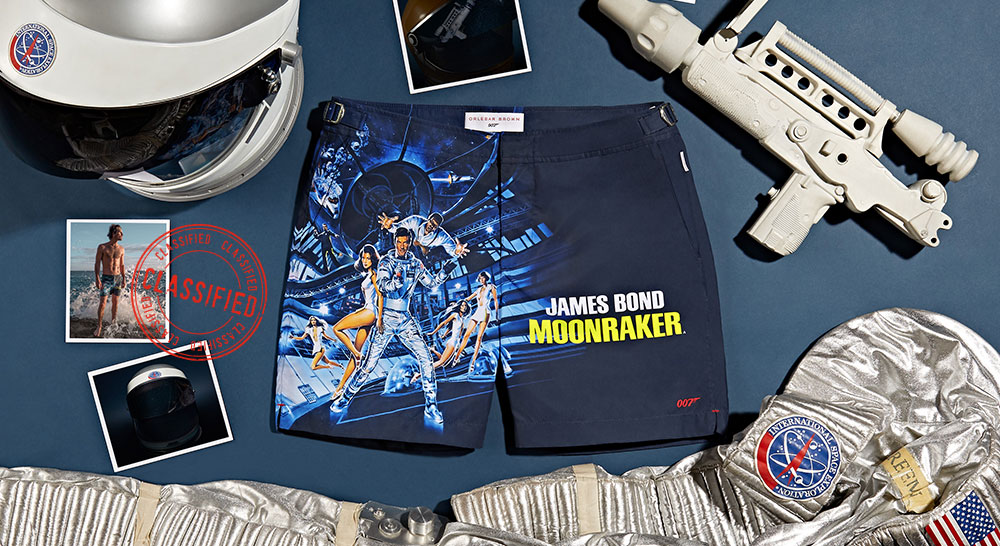 These men’s Bulldog swim shorts feature promotional film poster artwork for Moonraker by Dan Goozee. The tailored swim short is where it all began for Orlebar Brown; designed to give you effortless style wherever you are. Based on the pattern of a man’s traditional tailored trouser with signature side-fasteners to adjust and crafted from fabric that dries quickly, the OB Classic Bulldog offers the perfect blend of form and function.

These men’s Setter swim shorts in Riviera blue with contrast waistband are based on the shorts worn by Bond during his first encounter with Domino while diving in the Bahamas in Thunderball (1965). 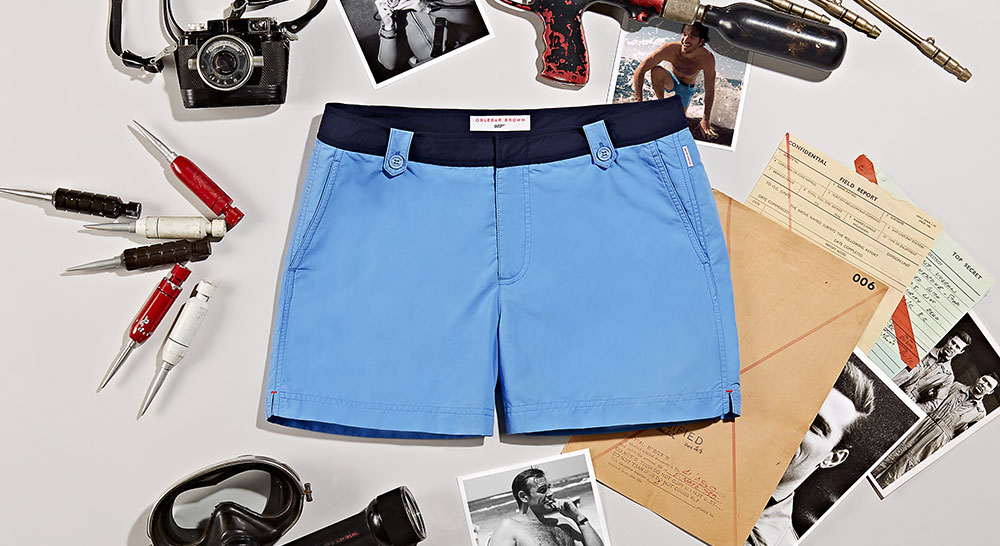 The Setter was one of OB’s original four at launch and is still their signature ‘shorter’ short. Taking their cues from a man’s pair of trousers, the OB Classic Swim Shorts come with side fasteners to adjust for the perfect fit. 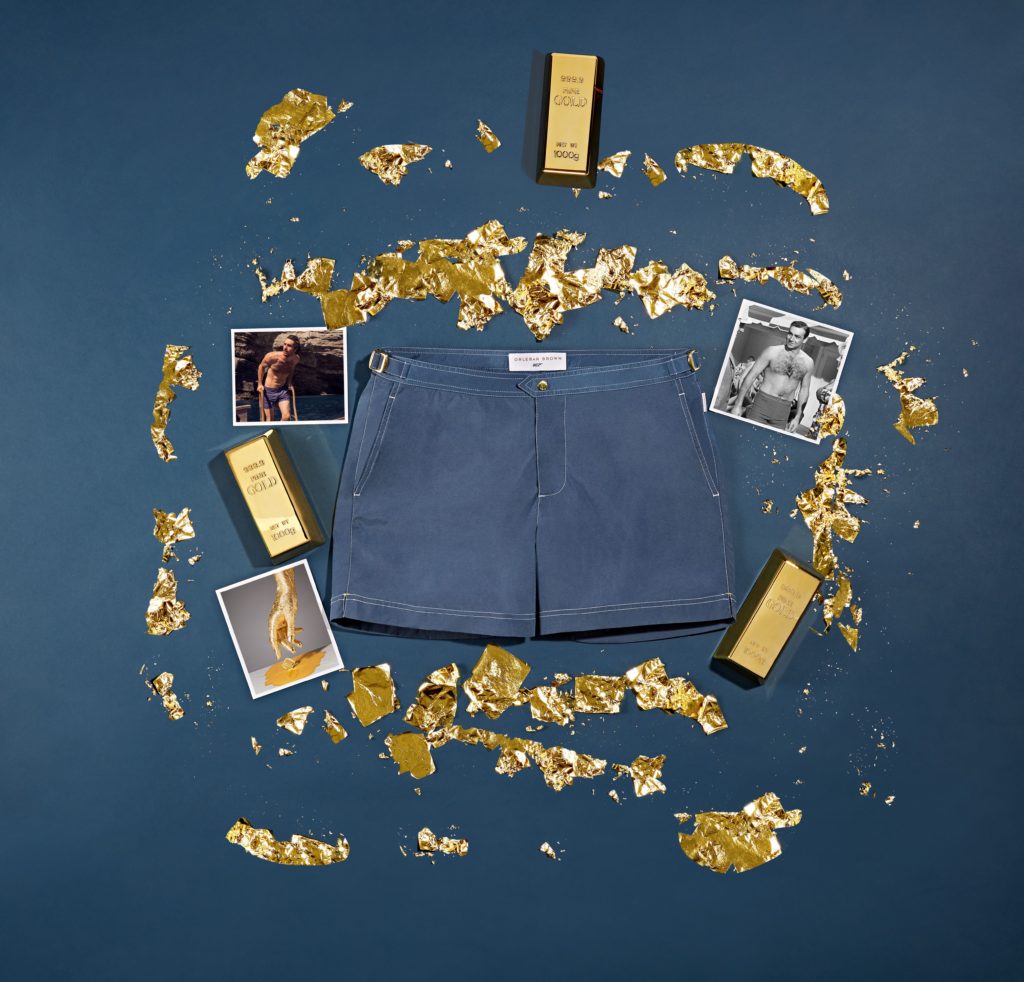 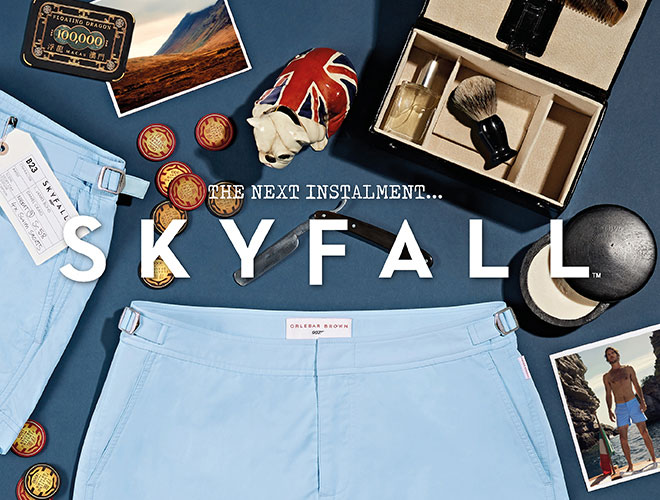 Maybe they are leaving the Octopussy gown, May Day snood and Drax Industries spacesuit until the next wave of clothing?! Anyone else putting their name down for Dalton’s The Living Daylights Austrian anorak (complete with cello accessories) or maybe Pierce Brosnan’s Korean Robinson Crusoe ensemble from Die Another Day?! But for now go to Orlebar Brown and their James Bond Capsule Collection page for more details, sizing and availability.

More photos of the entire range and their delicious retro minded Bond detail are on the Catching Bullets FB page. 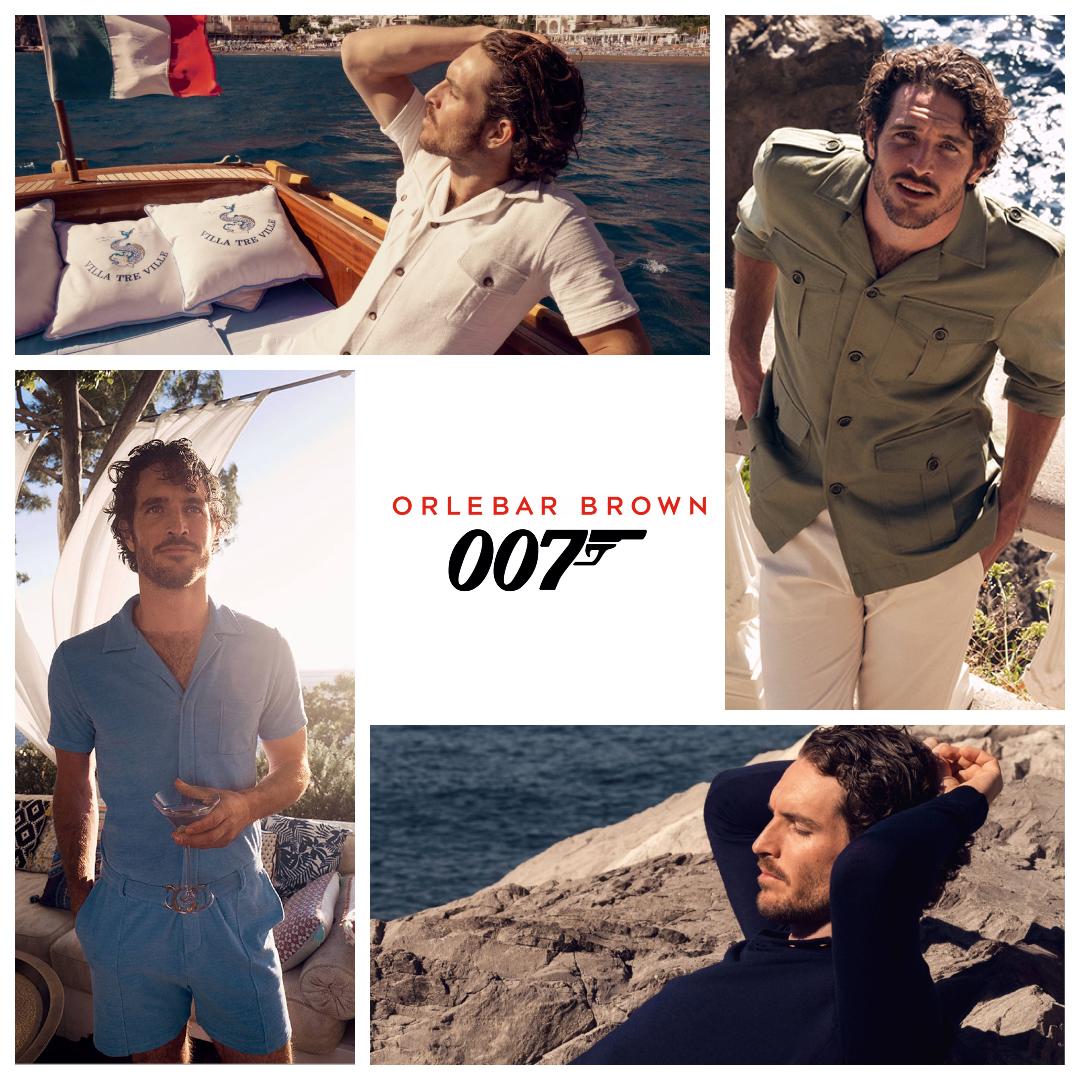