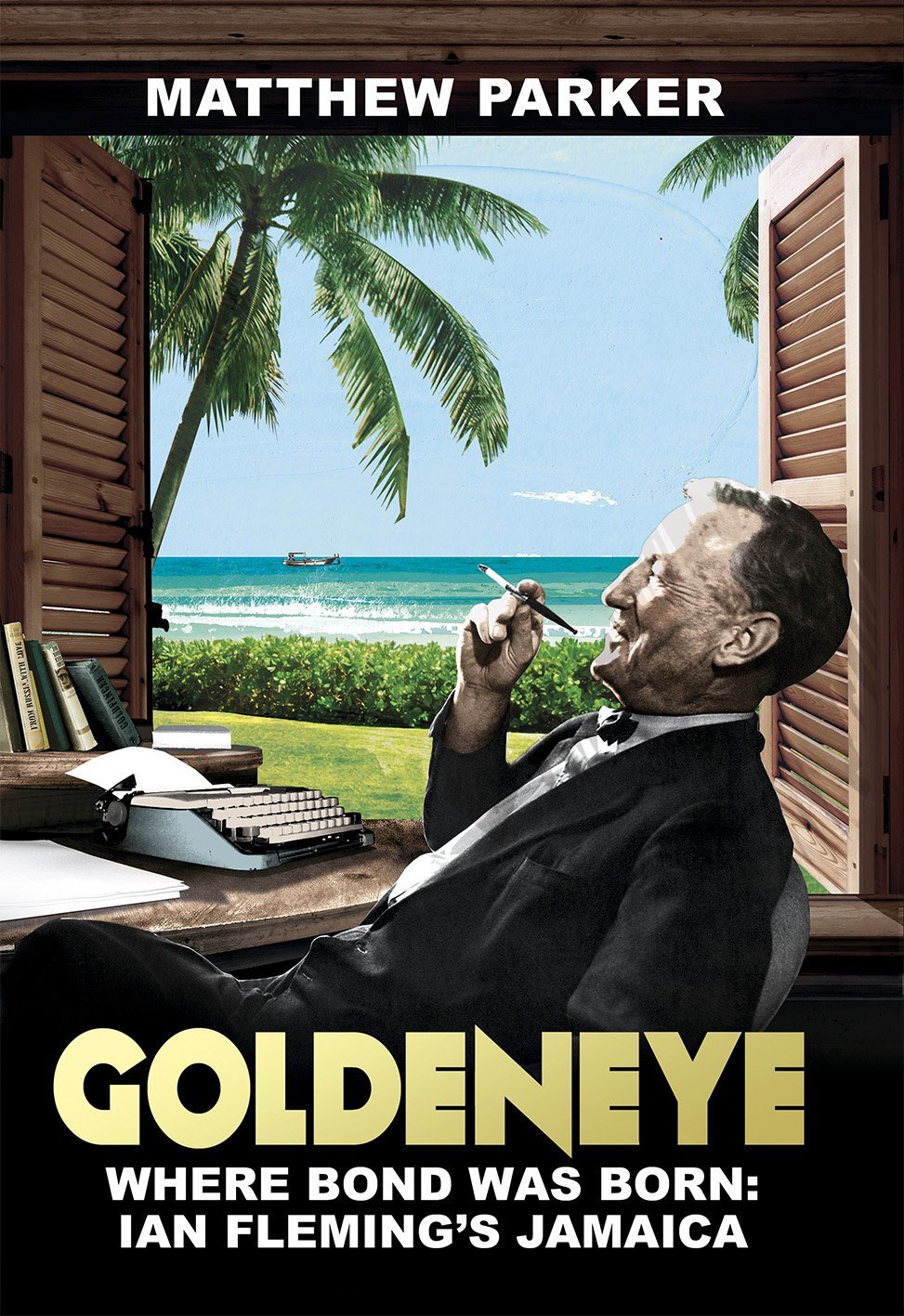 ‘Many of the ‘ingredients’ that Fleming threw together in the warm bedroom of Goldeneye to create Bond – the high-end jet-set tourism world in which his hero moves, the aching concern with the end of the Empire and national decline, the awkward new relationship with the United States, even the Cold War – all these roads led back to Jamaica.’

Following the recent reveal that EON Productions are returning 007 to his literary and historical roots with the forthcoming Bond 25, Matthew Parker’s top-notch Goldeneye – Where Bond Was Born : Ian Fleming’s Jamaica (2014) is a timely tome exploring just how and why the author fell in love with the island seven years before his typewriter ever did.

Goldeneye – Where Bond Was Born is not solely about the genesis of a literary hero – or even his empire hangover of a creator. It is about the founding of a project, an ideal, a workplace, a lovers retreat, a home and eventually a state of mind (it was also an abode that key neighbour Noel Coward forever mocked for resembling a medical clinic and would chip away at friend Ian by referring to it as ‘Goldeneye, Ears & Throat’). Designers and labourers who shaped the hillside haven are discussed and referenced as Parker provides a narrative of the land itself. The flora and fauna, the Shamelady green weeds, the colonial sugarcane heritage and how the site was once part of a larger estate with “over 1,000 slaves” carefully reminds of the natural and less natural shadows and traumas serving as a greenhouse to the burgeoning seed that was James Bond 007. Fleming here is written as a man with a conscience about the natural world and the moral laws against harming it – a trait which Matthew Parker believes is evident in Bond himself.

Parker – himself born in Central America with a West Indies childhood to follow – is highly aware of the complicated colonial (and less colonial) ownership of Jamaica, and how such proprietorships have their own evolutions, devolutions, fall outs and successes. Likewise, this work is also a vital record of the governors, wives, mistresses, laws (both at home and abroad), newspaper magnates (this book crosses history timelines with my own Catching Bullets more than once), vivacious lady pals, boozing and all manner of fallen aristocrats afforded a societal rise on the island.

No stone is left unturned when it comes to the social and societal demarcations of the island and – more importantly – how they changed, progressed and possibly even regressed in the almost two decades Fleming called ‘Goldeneye’ home. This is a Jamaica that Parker is still fascinated in long after Fleming’s death in 1964. “Jamaica provided a home for British eccentricities” says Parker – with the plantocracies and their players avoiding maybe more than just the British winters and the discussions of them in the members club of London. “For Empire nostalgists”, he continues, “Jamaica seemed a delicious slice of the old imperial uncertainties”. But later on, Ian’s wife Ann (and other peers) help Parker underline how the fading of empire in Jamaica had various last hurrahs. To be fair, a lot of Jamaica’s history has been predicated on someone’s last fling of the dice. Goldeneye – Where Bond Was Born is as much a history of Jamaica and British rule as it is Ian Lancaster Fleming and Commander Bond.

Parker evokes playwright Stephen Poliakoff’s great sense of how personal intervention, passing characters, eccentric pals and less obvious friendships can all shape a narrative – whether it is James Bond’s or Fleming’s himself. That Poliakoff placement of moments and happenstance is one of the pearls of this book. The accounts of Ian and Ann’s sometimes wilfully tempestuous relationship is familiar to Bond scholars. But here Parker ensures a rich historical insight runs alongside an examination of a marriage, a relationship and, initially, an affair fuelled by two fascinating life-forces colliding in ever-fascinating ways. 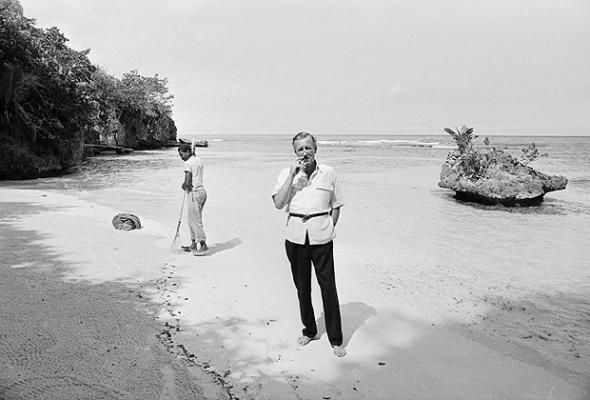 Later bound quite rightly to the chronology of Fleming’s novels in the second half of Goldeneye, Parker uses that framework to account for the creative and personal ebbs and flows at ‘Goldeneye’ – and of course Jamaica and the West Indies world beyond that. Parker expands upon his thoughts on each book and its story vices and genesis, but is equally quick to explore and underline the concurrent relationships Ian has with the likes of housekeeper Violet and  gardener Ramsay Dacosta.  The real-life Havelocks, Strangways, Tanners and Posenbys either cameo or star – adding fair linkage to the fictional and real world of both author and subject. Yet, Parker avoids joining dots that are not there. Not everyone who was very real to Fleming needs to be echoed in his work. In a similar vein, Parker fails to fall into that origins genre trap. He navigates with finesse the now familiar punctuation points of the Bond genesis story. How the Birds of The West Indies tome serves as a possible inspiration for the name of James Bond is never eulogised. More pertinently, lesser known island skirmishes, arrests, smuggling rackets, double-crosses, back-hands, brokered deals, local and less local politicians and their favoured drinking holes are what Parker picks up on as he deftly supposes and impresses with the real world correlations between Fleming and his literary world. A later fictional crisis at the hands of SPECTRE in some exotic land is often traced back to the clash of personalities witnessed first or even third hand by Ian in Jamaica, with Britain as empire as a constant brass frame round Fleming’s mirror.

And like his author subject, Parker occasionally yields his own blunt stoicism too. Towards the end of his life Fleming later noted [as he was preparing Ian Fleming Introduces Jamaica with friend Morris Cargill] ‘Jamaica has grown from a child into an adult’. Parker is quick to suggest how Fleming’s own depiction of Jamaicans had however maybe seen less maturation over the years and books.

Less a dry narrative of sandal wearing chaps paying over the odds for their Morland cigarettes than a studious array of thoughts and insight, Goldeneye – Where Bond Was Born is no isolated island of a tale. Britain, its media and political animals, the literary and entertainment circles, trade conditions, a devolving empire and the characters of Hollywood itself are involved from the start. With quite a timeline while to go before Eon Productions, Albert R Broccoli and Harry Saltzman came knocking, this is an Ian Fleming and a Jamaica already in the company of visiting Hollywood dignitaries and key players. Some become trusted and vital friends – Blanche Blackwell, Cecil Beaton, Evelyn Waugh and of course Goldeneye neighbour Noel Coward (who soon becomes a great Tanner to Ian’s ‘Commander’). Whilst others maybe sit less comfortable with Fleming – such as Errol Flynn who no doubt posed an instant rival of notoriety, womanising and liver strength. A great moment sees Coward and his Firefly abode demand the poolside rules of “nude only” be obeyed at all times. Cue Fleming wandering in one day to find Laurence Olivier and Vivien Leigh fooling around buck naked with a jazzy, locally sourced ‘cigarette’ on the go.

The Broccoli / Saltzman involvement comes late in the day but that is because – in terms of Fleming and his story with Jamaica – it was the closing chapter, the final act that quickly ran away from him as he returned to Jamaica to write and narratively house his last 007 novel, The Man With The Golden Gun. Parker gleans fresh insight around the Dr. No production and just what Fleming thought about his first screen adaptation. Or to be more specific – what someone said he thought about it. A recurring trait of some of Goldeneye’s contributors creates a real members club gossipy take on Fleming (and joyously so). There is often a real time-capsule sense of being stuck at the quiet table at a function with Parker relaying the better scandal coming from the next table for the reader’s benefit. In discussing the Jamaican production context of the film version of Dr. No, Parker astutely weaves initially random, but ever relevant nods to a visiting Princess Margaret and how the beginning of Bond’s onscreen independence coincided with that of Jamaica’s own burgeoning self-rule – and the British government’s 1962 vetoing of immigrants being able to travel to a Britain that was once known as the ‘mother country’.

It is curious too how the Jamaica, West Indies and Bahamas of Fleming’s real world are discussed by Parker as being on their own final hurrahs. He notes “In the West Indian stories, in the For Your Eyes Only collection, there is also a palpable sense of decline and retreat. In Quantum of Solace, the Bahamas are tired and dull”. Yet one possible oversight of the book is overlooking the explosion of renewed interest in Jamaica, the Caribbean, its depiction and tourism fallout fuelled quite aptly by the Eon movie making take on 007. Though Roger Moore and 1973’s Live and Let Die is aptly discussed. And of course 007 will one day return to Jamaican soil.

Hoping for at least a BOAC airplane holdall of a retro minded story, Goldeneye – Where Bond Was Born is so much more than a Mad Men with Red Stripe and sand sort of a biography. It is a skillful mash-up of both time and history, wisely realising –  just like Ian himself – that the island was never just Ian Fleming’s Jamaica, Parker has crafted a valuable document of a publishing phenomenon and now cinematic mainstay, an overseas Britain, a Cold War as witnessed from the warm climes and colonially sourced comforts of Oracabessa and an acute study of an author, his typewriter and which room gets the best sun in the morning.

Goldeneye – Where Bond Was Born : Ian Fleming’s Jamaica by Matthew Parker was published in the US on March 11th 2015 by Pegasus Books and in the UK on August 13th 2014 by Hutchinson / Random House. Bond 25 will hit cinema screens in April 2020.

Catching GOLDENEYE and the London launch of Goldeneye – Where Bond Was Born.