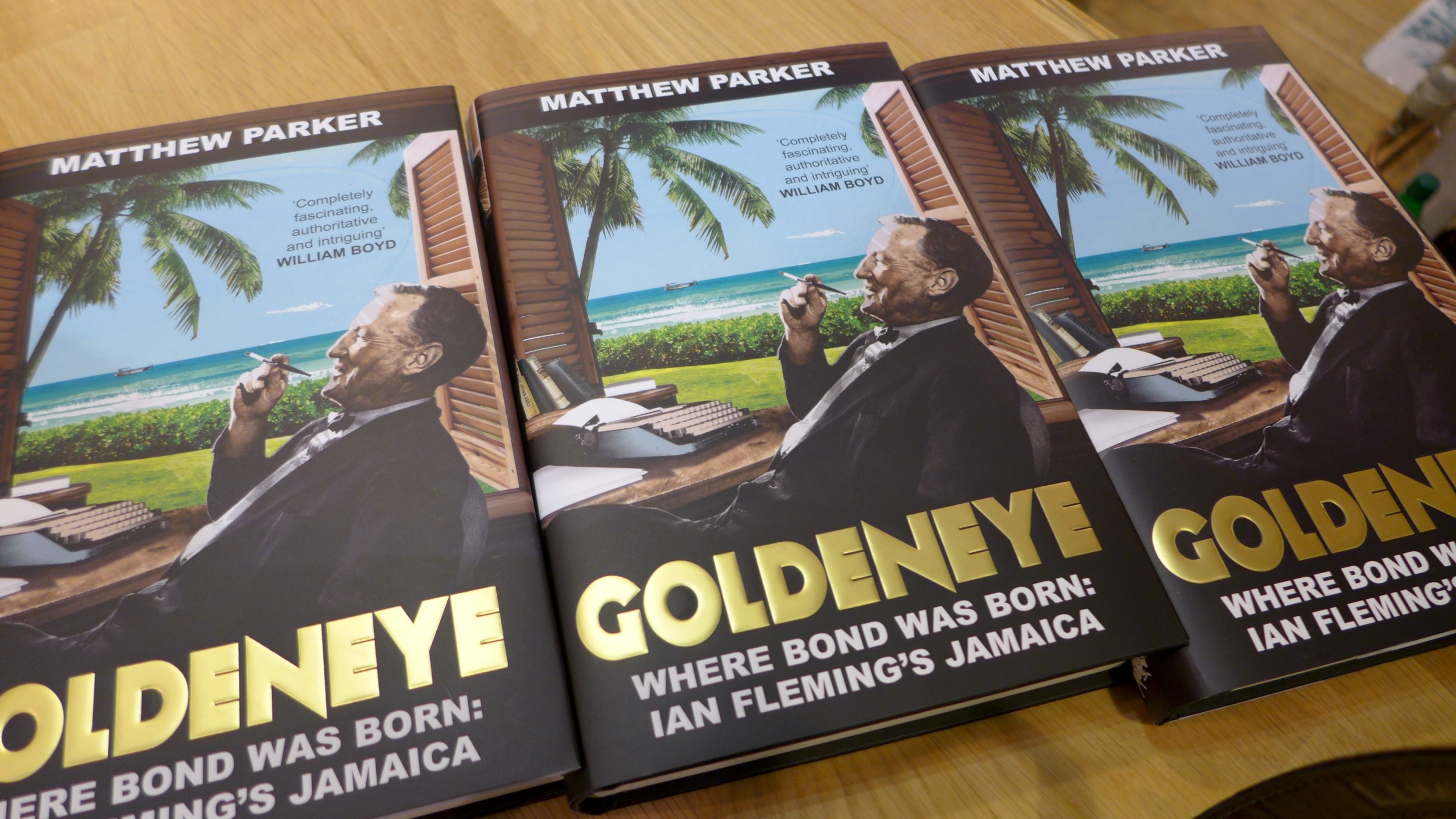 END_OF_DOCUMENT_TOKEN_TO_BE_REPLACED

“Everything I write has a precedent in truth” – Ian Fleming 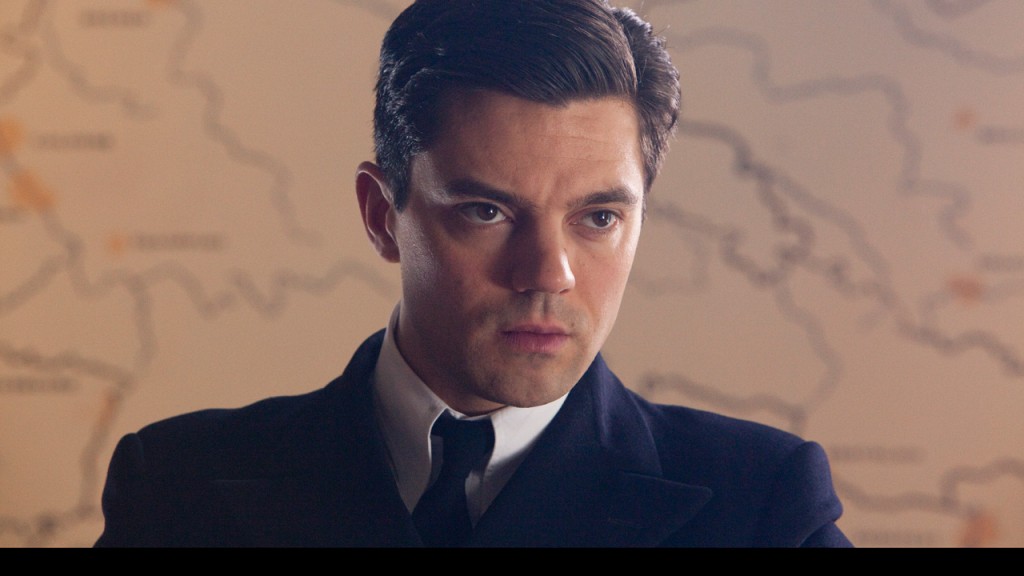 Obviously bankrolled by the unabatting global interest in James Bond and itself dramatically launched by an initial question as to “who?” is this 007 character, British director Mat Whitecross (Ashes, Sex & Drugs & Rock & Roll) and writers John Brownlow and Don McPherson (with noted Fleming biographer John Pearson on consultant duties) circle a World War Two context to try and explore the world and motivations of one Ian Lancaster Fleming. It has long been acknowledged that Fleming’s own wartime experiences shaped the outlook and experiences he in turn fed into Bond. His various episodes and Intelligence hijinks were rife for any writer to get their story claws into. But just as Fleming has the obvious audience-savvy agenda of detailing how the Second World War shaped one of the 20th Century’s most iconic characters, this drama also tackles what created Ian Fleming, the writer. Added to that, in Whitecross’s version of events the First World War also has its echoes – and not just with Fleming himself (his father Valentine died in 1917 and received an obituary penned by his friend Winston Churchill) but his family, Britain and the world. 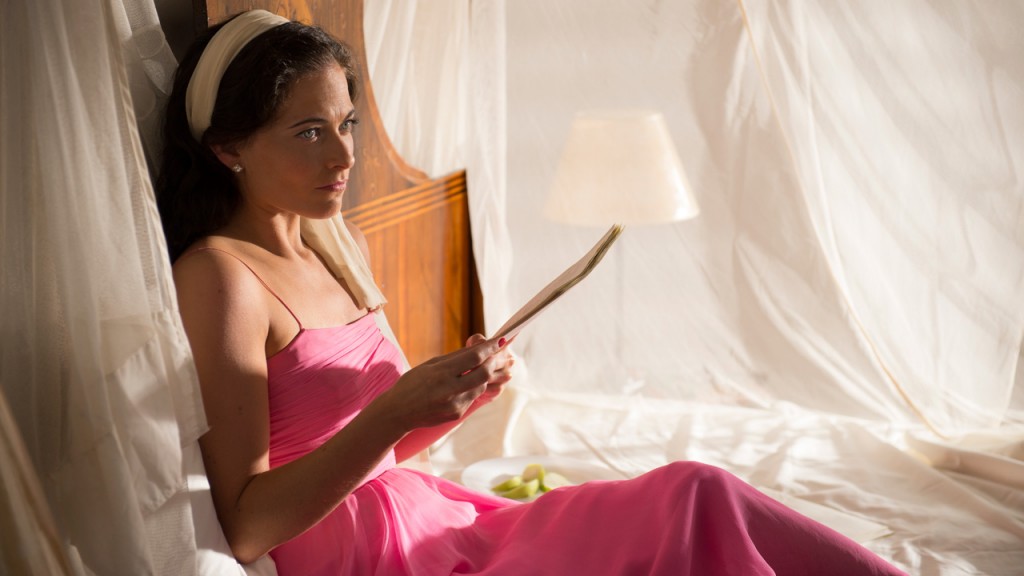 An initially too contemporary choice to play the very 1930s Ian Fleming, Dominic Cooper is at first too slight, too young, too smooth-chested and just too damn beautiful for Ian Fleming. But very soon under Cooper’s performance this Ian Fleming and, by default, 007 himself emerge as an identifiable figure rather than a Etonian clone, and one carefully shaped by the wars abroad and at home, exhibiting a cruel duplicity in the fields, corridors and silk sheets of battle. It is important to remember too that Ian Fleming was quite a ladies man in his day. It has to make sense he is a modern-day catch like Cooper.

The character of James Bond was always a touch different to James Bond as filmed. Less handsome, less cool, less Scottish. But like Agatha Christie, Sir Arthur Conan Doyle and JM Barrie, it is a narrative challenge to separate the author’s world from that of their characters when the temptation is to forever assume and join the life dots. It is made doubly difficult with a man whose public persona only really started in his final decade or so. 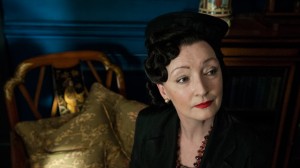 A product of the dying embers of empire, Fleming’s own carriage and poise is from a different era of Britain, a different era of masculinity and a different era of global oneupmanship. This was a time when thirty year olds looked forty-nine. Cooper is actually older than Ian was at the time. Fleming himself looked far older than his 56 years when – in 1964 – heart disease, life stresses and his vices sadly proved you only live once. Portraying an actual person so often naively boils down to “does he look like him?”. Of course it helps and is a concern. But so too is attracting an audience to a project and a decent actor to a role. It’s about essence not essentials. For that reason, Cooper is very quickly an apt and canny choice – an agile and natty ladies’ man who, no doubt like the real Fleming in his day, is fetching in and out of that naval uniform. The real Ian is often presented in those familiar black and white, smoke-blowing publicity shots – all taken in response to the books and then early films success. But Fleming, Cooper and director Whitecross’s own Eyes Only mission is to remind he had a whole life and a world where his proclivities and roving eye were not enough and one which was possibly hemmed in by becoming a fully fledged writer and author. Cooper lends his Ian 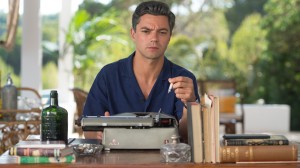 an authority-clashing intuition throughout, partly borne out of a frustration his mistress is someone else’s and that nagging concern about what will any of that generation do after the war has ended? Cooper nails the script’s suggested loneliness with a sense of personal purpose that is very much adrift in the face of a domineering mother and life-thriving older brother (“he’s married to a film star – I’m not”). “Having something to offer” is quickly a key motif. And it is that – rather than the pinch-of-salt homages to gambling, cars, arm-stretched gun poses and monotone European bad eggs – where Fleming more astutely suggests the personal refuge of writing and imagining stories led to 1953’s Casino Royale. Here the creation of that pivotal debut novel is simply presented as being a gesture for eventual wife Ann (Lara Pulver) – even if Cooper’s typewriter-bound Ian dismisses it during an opening coda with “it’s not bloody literature, it’s a pot boiler” which somewhat contradicts his later wish for it to be “the spy story to end all spy stories”. 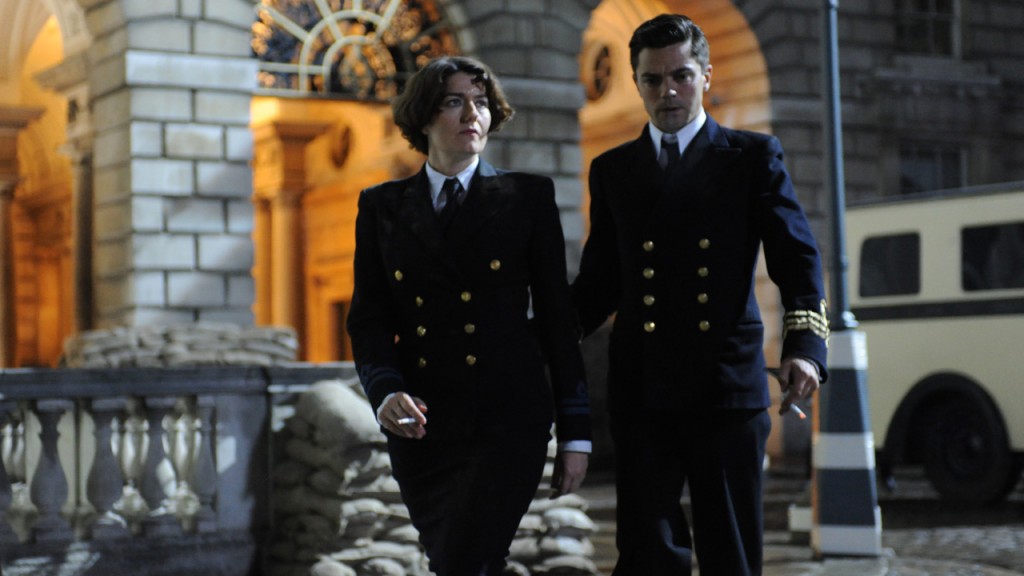 The historians and archivists all have their insights and theories, but maybe Fleming wrote because sometimes that is all that writers can do. It is not perhaps intentional, but one of the successes of Fleming is its suggestion James Bond 007 was a literary hero for those that experienced and survived the war – for those that knew its duplicities, never-again opportunities, sexual emancipations and regrets.

Playing opposite Cooper is Lara Pulver (Sherlock) as Ann O’Neill, married to a war-absent husband and betrothed as a mistress to Lord Rothermere (Pip Torrens). It is a deliberately confused set-up – for Fleming and the society circles witnessing it. This is an Ann whose cut-glass skills in the function room match her appetites in the bedroom – a sort of Princess Margaret meets Wallis Simpson. Though a near-rape scene as Fleming is mourning the death of a loved one sits goes from harsh to ridiculous and back again as the ‘romance’ crackles away over four episodes. The series narrative core, Ian and Ann’s love maze is a welcome flipside to the spying hijinks as the sadomasochistic leanings of their union become a very adult counterpart to Cooper’s fun Boys Own antics playing spies in Europe.

Some characters do vanish too fleetingly. Harry Treadaway (Penny Dreadful) pops up as a brief and nervous navy junior, Dean Lennox Kelly (Shameless) is a refreshing working class Scot in a sea of stiff upper chaps and German actor Wolf Kahler (familiar to anyone who has seen Raiders of the Lost Ark) plays a crucial conscience-altering Nazi commandant. 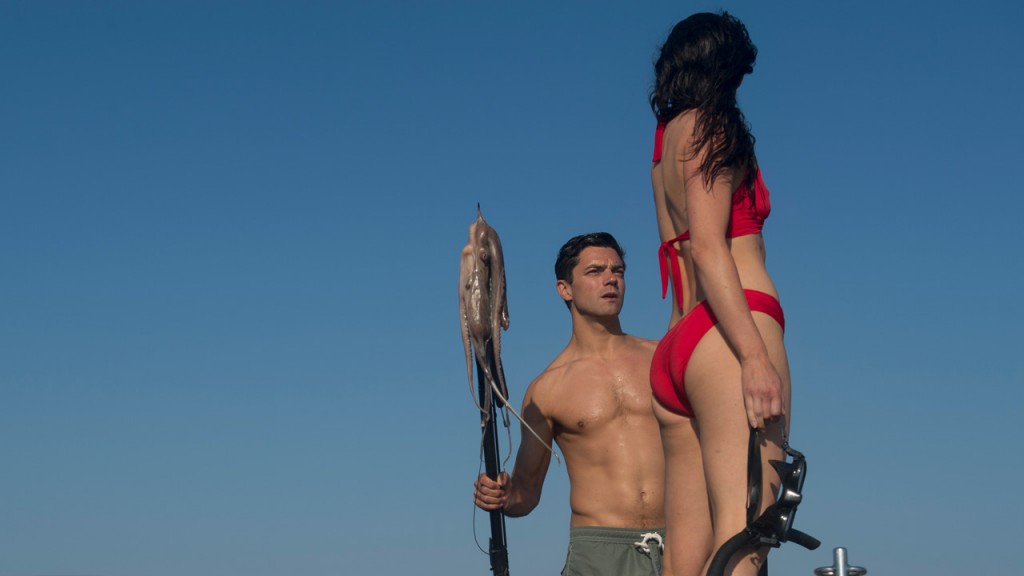 Likewise Camilla Rutherford (The Fifth Estate) is cruelly resigned to a couple of scenes (though one of them certainly has impact) as Loelia Ponsonby – Fleming’s more-than-feasible inspiration for Bond’s secretary of the same name. Samuel West as Fleming boss and eventual friend Admiral Godfrey is obviously channelling Judi Dench and Bernard Lee, but the easy nods to ‘M’ make way for a warm, principled series regular. Similarly Anna Chancellor’s marvellous and loyal Lieutenant Monday (the series own Miss Moneypenny) is more sister than conquest turning a blind eye and faked signature where necessary. But it is Lesley Manville’s icy turn as Ian’s mother Eve that steals many a scene with a simmering resentment at Ann whilst making an empirical play at hiding her own skeletons.

As a genesis project (not that Genesis Project – though there is a curious take on The Wrath of Khan’s Kobayashi Maru in the form of ‘The K Protocol’ which Fleming gets involved with) the screenplay lacks the grace and finesse of Mark Gatiss’s sublime An Adventure In Space and Time (2013) which so eloquently focused on the origins of the onscreen Bond’s 1960s cult cousin, Doctor Who. However, the breathing space of a four-act structure focusing almost solely on the war years is a welcome one – even if some of the narrative implications of some of the war exploits will set the eyebrows of the Fleming purists to Roger Moore raising heights. Fleming’s involvement in the famed Operation Mincemeat is not ignored, nor is his alleged brainstorming assistance in the early days of the CIA. However, the subsequent Cold War that shaped Fleming and Bond is kept at bay leaving a gap of context that is perhaps equally important to the origins of our man James. Likewise, some further fun and intrigue could have been somehow had with Fleming’s trademark habit for contrary and provocative titles (You Only Live Twice, Octopussy, Dr No, Live and Let Die, Goldfinger) as well as his alliterative character names (Moneypenny, Pussy Galore, Rosa Klebb, Ernst Stavro Blofeld, Scaramanga). 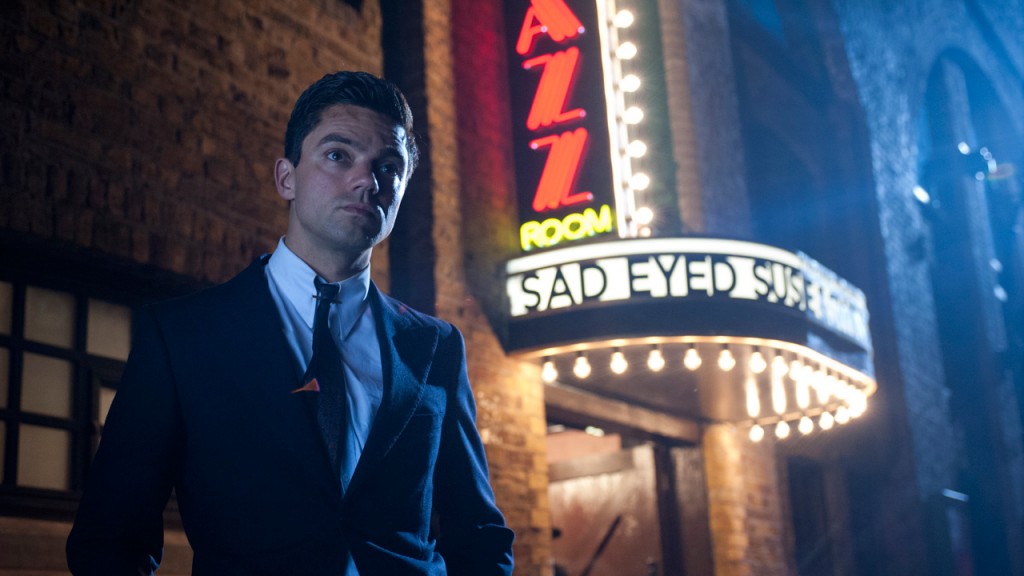 But maybe then the piece becomes a knowing in-joke to itself where Whitecross is damned either way as those life-dots get in the way. Fleming’s intuition for intelligence is a better played out device. It is entwined here with a need and ability to spin a tale, to add a backstory to a war-vital dead corpse, to fake an accent and persona when needs must and to make heart-wrenching false promises for the greater good. All this feels more of a natural parallel to the Bond we all know than fun allusions to golf-ball gadgets and hidden cameras. And like 2012’s Skyfall, this Fleming is also comedically dismissive of the exploding pen culture with a silly scene involving Chancellor’s Lieutenant Monday.

Of course Fleming himself was known to elaborate and embellish (as all good writers should, and certainly those that experience war) so we should forgive the series about him occasionally vaulting over the literary Bond to homage and honour the cinematic Bond. Episode One’s billowing opening titles are a deliberate underwater homage to 1965’s Thunderball and its own overture graphics (which may actually be the last film Ian himself would have wanted referenced as that entry and its now-famous legal shenanigans were hardly welcome). And moments later we have a nicely lensed 007-esque skiing sequence – all shot quite radiantly by Ed Wild with an indie-budget defying bravura seen in each episode. Real-life locations Budapest and London ably double and triple up for Canada, Germany, Austria, Paris and Lisbon and the society bashes, jazz joints and war rooms hold their own under Sophie Becher’s production design. Quite rightly, the whole piece often feels more Bletchley than Broccoli. 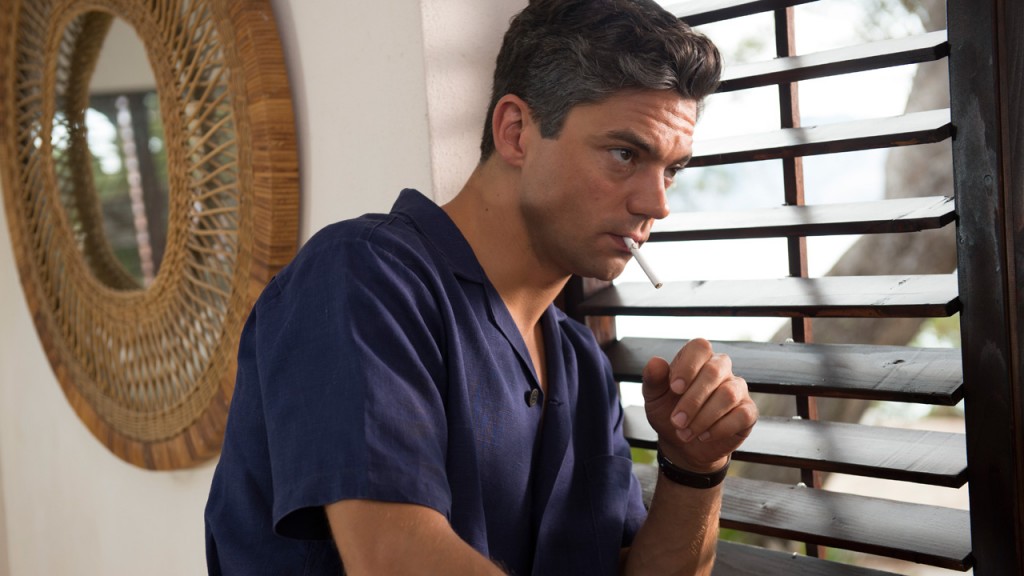 The film Bond nods soon make way for the politics at play, with Fleming sickened by witnessing the rising cruelty towards the Jews – a motif repeated later when a braver Ian is able to do something about it. And a cracking sequence sees Fleming and new love Ann flouting the air raid sirens for a first slo-mo clench with glass shattering aplomb. There is a painterly, sleeve-jacket sort of charm to the [computer generated] visual likes of a snowy Nazi mountain retreat no doubt homaging Bond onscreen’s design alchemist Ken Adam, the modernist excess of an archive room’s glass ceiling or a pan-European steam train powering through Austria seen from above. These visual tics dotingly ape that John Buchan cover-art world which writers Brownlow and McPherson suggest inspires the desk-bound Ian. Added to the opulence is Caroline Harris’ sublime costumes – especially the women’s attire which nearly out-Downton’s Downton as various levels of high-end couture swan in and out of many a Mayfair bash with Lara Pulver’s Ann O’Neil particularly turning more than Fleming’s head.

World War Two was a launching pad for Ian Fleming’s discovery of Bond. Whilst Fleming lacks the Jamaican world that furnished Fleming’s writing, any initial encounters with Broccoli and Saltzman and the Cold War time-frame which one could argue finally enabled the writer and his mind a valuable context and distance to twist and fly with the Blofelds, SPECTREs and Tiger Tanakas of his arched, baroque world, it is nevertheless a fun, often lavish and well played ‘imagining’ of the all-important starting pistol. Now where are my Morlands…?

Fleming begins on Sky Atlantic in the UK from February 2014 and on BBC AMERICA from January 29th 2014. 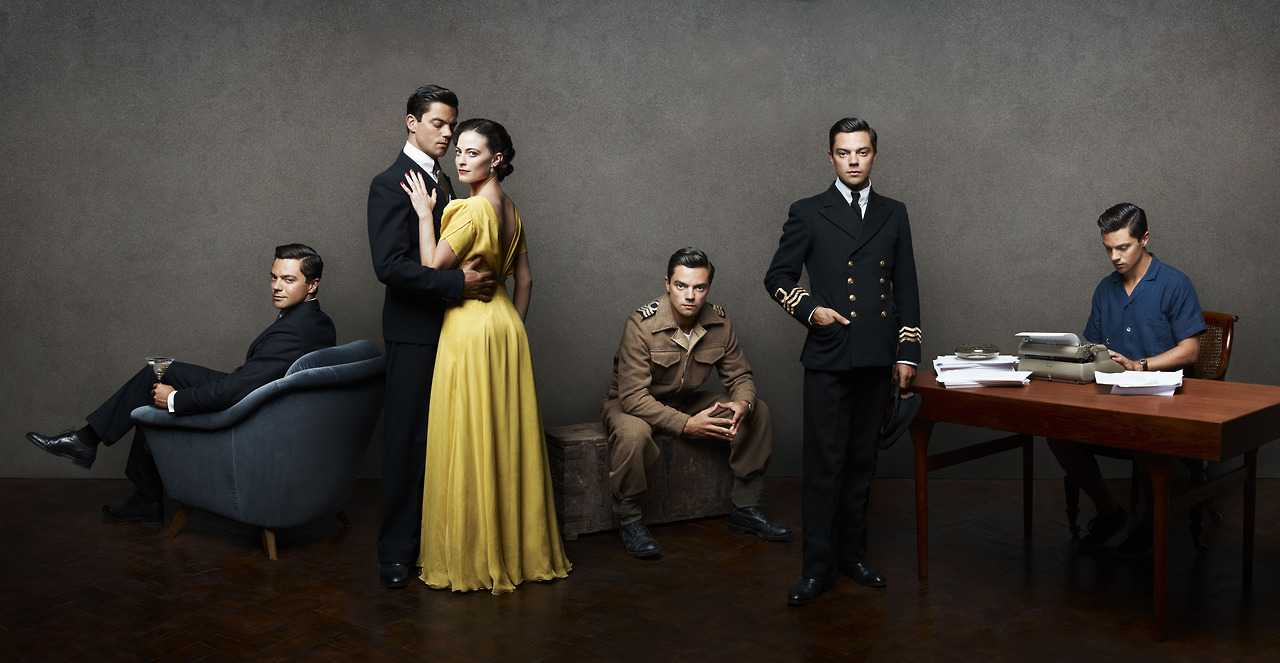 With thanks to Sky Atlantic. 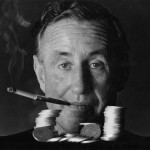 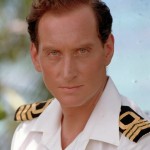 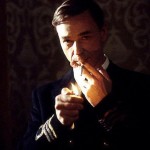 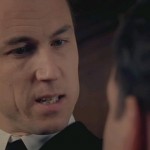 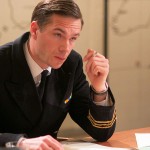 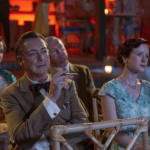 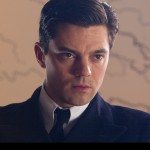