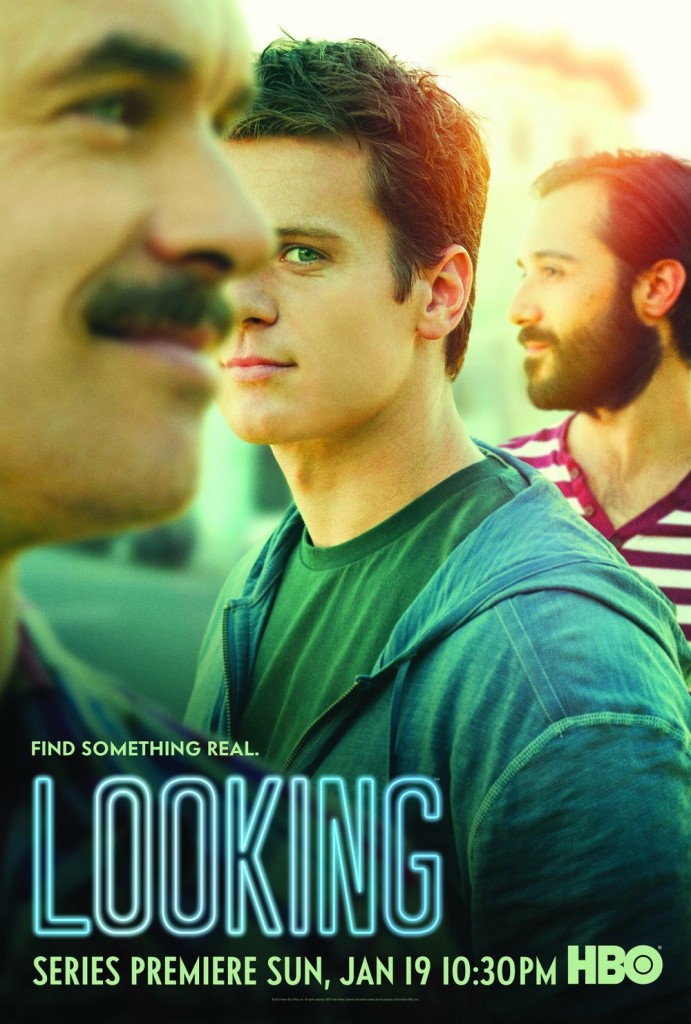 Less a gold lamé baton handed on from the hindsight, camp and shock of Tales of The City, Will and Grace and Queer As Folk respectively, HBO’s Looking is not about running forwards. Like British director Andrew Haigh’s previous [and pitch-perfect] feature Weekend (2011), this is about half-seen exchanges outside busy bars and stolen conversations on various Lower Haight sofas as the work talk and weed pipes get passed round as inconsequentially as the prawn crackers from a Thai takeout (not a euphemism!). “I’m proud of you – you’re a pervert now” dismisses one of Patrick’s friends as Looking quickly proves it is not about coming-out stories, Cher gags, fantasy Madonna dance-offs in the bus queue or bottom licking commotions. This is not Sex And The City but just done with gay men replacing the ladies. We’ve had that. It was called Sex And The City.

Everything the possible detractors will level at Looking is exactly why it works. It is not a peaks and troughs screaming queen of a comedy-drama with sexual pratfalls and verbal grenades. Nor does it wear its politics on its leather/denim/tattooed sleeves. Equal marriage, Prop 8 and DOMA is not its agenda as it is not all of ours either. The show and us are aware of the principles at stake, but how many of us really fuss about it 24/7? When very straight comedies and dramas are tapping gay marriage as a narrative normality, it would be wrong of Looking to be throwing its bouquets out the pram in every episode (a wedding episode obviously touches upon such matters but from Patrick’s perspective of messing life up with his intended plus-one).

The opening story especially is a wilful almost inconsequential slow build – an afternoon-paced overture to these characters lives that may lose some viewers, but please stick with it. Episode Five is a beautifully languid Before Midnight exploration of a day off in Golden Gate Park, the planetarium and the kind of affecting character interplay which only Haigh’s Weekend ever got right in recent times. Yes, Looking is savvy enough to throw in a Golden Girls put-down (what isn’t, Rose?), but its gay pulse is not predicated on them.

Spring-boarding off creator Michael Lannan’s previous short film Lorimer (2011), there is actually an affecting delicacy to the lives and exchanges of games designer Patrick, lost artist Augustin (Frankie J Alvarez) and nearly-forty waiter Dom (Murray Bartlett). Like San Francisco itself, the differences and expressions of everyone’s sexuality is a given. There are no closeted jocks or intimate-shy handmaidens here. Moving too fast is a deliberate fault of some characters sex lives, but never the show’s writing or insight into at least three generations of contemporary gay men. These are [almost] nice people doing their thing – the Augustin character is a deliberate hard sell and carved with such pitfalls of attitude one realises he is totally familiar. The difference here is that for gay audiences – for good or bad – this is our thing now; and as one character astutely notes, “guys are guys”.

A key motif of Looking is “being who we think we are”. For the trio of main characters “looking” is indeed key. But looking for what? Maybe some are looking for love, intimacy, a better street to live on, better praise from their peers, better sex from a threesome (or not) or just looking for others who are also dissatisfied with their lot to validate everything (Augustin’s problem). All held together with a solid cast, the show slowly pulls you in. Whilst how Groff’s Patrick really knows Alvarez and Bartlett is perhaps not flagged up enough early on, the friendships are believable with a pleasing short-hand and explanations do arise without surprise.

Likewise Lauren Weedman’s Doris is a savvy, bubble-bursting best mate, Raúl Castillo’s Richie is a hot and kind Mexican and Scott Bakula is an old guard Castro florist with age and hindsight on his side – “we still had sex, but it was friendlier” he notes about the one-night stands of the 1980s and 1990s. Cyber-dating is of course a support app of the show – unavoidably used but not exclusively. Though there will be many a moment when some of us in the audience look to our overpriced brogues with acute embarrassment at the behaviour on show. Patrick and pals research their past and present dalliances and shag-obsessions on the Instagrams, okaycupid.coms and Grindrs of this world. Characters over-worry about the Instagram photos of a dinner date and the successful exes now with their own Wikipedia page. But their real stories are often advanced from chance encounters on the MUNI train, accidental glances through a bar doorway, in an empty sauna and works drinks nights. The relationship between Patrick and Richie is particularly lo-fi, not remotely reliant on new technologies. The politics of “friending” on social media and being “an 82%” match“ is rolled out, but so too are the real-life concerns about what messages Patrick gives his new Brit boss Kevin (Russell Tovey) when working overtime on a Sunday and when exactly does a three-way become a problem or a plus? And just when is it no longer polite to mock the Brits after too many bottles of free Bud?!

But is it identifiable to non-San Franciscan, non-American audiences? Of course it is. In the same way Haigh’s Weekend chimed with Top Ten film lists the world over, Looking is a wholly identifiable show, carved with the same incisiveness of its creators previous work. “If I was embarrassed about it, I wouldn’t do it” is a telling line from content, well-earning sex-worker CJ the adrift artist Augustin desperately wants to be like. Not every piece of dialogue need be a barnstormer. Not every quip requires its own t-shirt. Though “you gave him a winky, smiling face? What are you – a Japanese teenager?might do the rounds. It is never a glib show. Nor is it a dot.com, labels and luxury lifestyle fest. With an easy blend of ages and social backgrounds, Looking is thankfully never about whiny, white rich gays. The basement apartments, corridors and streets of Looking are worn and lived in. Like the characters and their love lives, not everything is new and shiny but all of it is functional. That is what San Francisco affords this series. And that is why it is the vital fourth character. Real-life Castro drag artists Peaches Christ and Honey Mahogany are on well-manicured hand, the Castro Theater cinema is the noble granddame backdrop it always has been, the leather-bound Folsom Street Fair plays itself to great effect mid-way through the series, Dolores Park plays Dolores Park, The Stud bar is a location must and the forever-vintage streets of Mission Dolores, Market, the Castro and their pizza [and men] by-the-slice sidewalks are recognisable to anyone familiar with the worlds of Maupin and Milk. What San Francisco brings to Looking is what the show itself gets very right. It is that sense of community, of a neighbourhood of characters and shared experiences often ticking over through nothing but an inexplicable and shared shorthand.

We may not have had the best timeline of televisual representation over the decades. But what doesn’t always embody us makes us stronger – and all that article-writing jazz (maybe).  The landmark likes of Tales of The City, Queer As Folk, Will And Grace, Angels In America, Beautiful People, Queer As Folk and the queer Carrington boy in Dynasty may have been all we had. But they were still ours. Looking represents a smart new chapter. Season Two has been greenlit and audiences – despite a minority of initial and lazy reactions declaring “it’s boring” (it’s not) – have grown and spiked just as the series and its wise writing has. And in the fun, warm, unexpectedly raw, real and fresh-telling style it has on offer, going through this Looking glass could well bring us to a wonderful wonderland.

Mark O’Connell is on Twitter and the author of 1980s gay childhood memoir, Catching Bullets – Memoirs of Bond Fan. With thanks to Sky Atlantic.