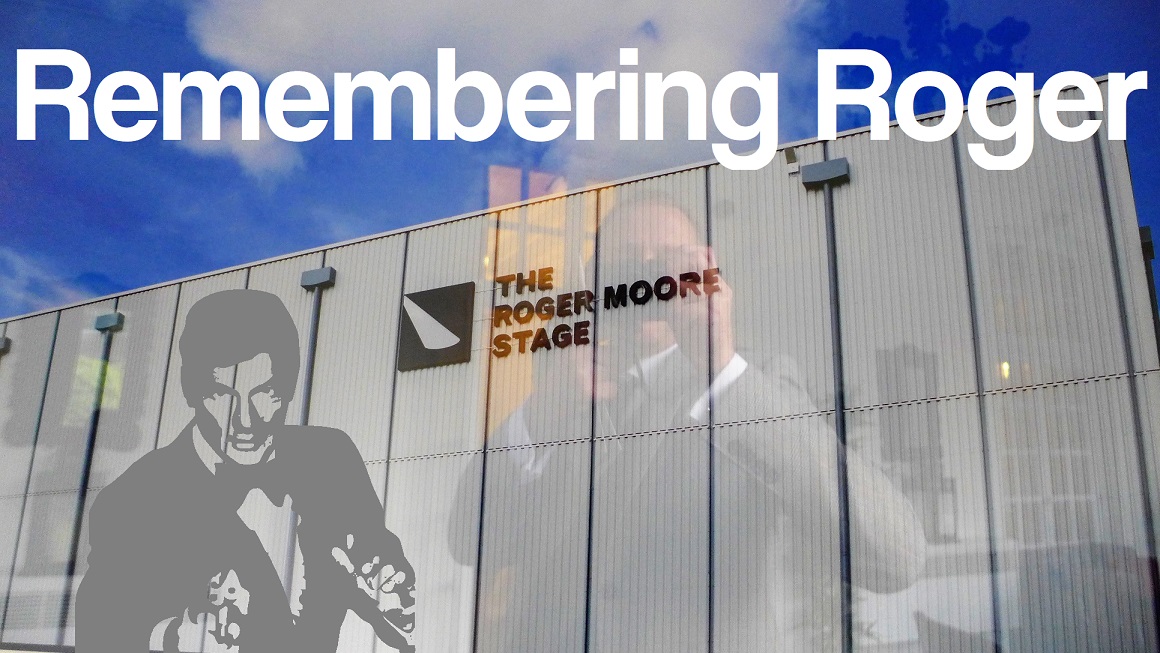 ‘Well when I was a child, I spake as a child…But I would always spake as Roger Moore as James Bond 007, imagining myself carrying a Walther PPK in my school blazer, nodding with an arched eyebrow at the best leggy stewardesses – and stewards – Gatwick Airport could muster and karate chopping anyone in the hot-lunch queue pouring scorn on A View to a Kill.’

The bespoke Bond, the diplomat Bond and the gentleman Bond… Roger Moore was simply my Bond – the onscreen hero who inadvertently taught me about how to look your best, how to enter a room, how to negotiate, how to treat people and how to do it all with a knowing, but kind smile.

From a kid’s birthday autograph to a prized t-shirt, a frantic search for magazine covers, a wall clock, a muse for a book, a long-awaited encounter full of warmth, an email of thanks and a wedding telegram to be read out at the most apt of locations … Sir Roger Moore has always been the punctuation to a life of cinema and going to the movies. And that legacy of grammar is now timeless – forever found in his movies, his work, his quips, the kids who are now adults because of his charity beliefs and those that knew him.

For attractive lips, speak words of kindness.
For lovely eyes, seek out the good in people.

And now on the weekend of what would have marked his 90th birthday, the career, zeal and life of Sir Roger Moore was celebrated in exactly the right style at Buckinghamshire’s dream factory, Pinewood Studios. And this former Cub Scout with an A View to a Kill t-shirt, Roger karate-chop skills and habit of echoing Roger with every walk through an airport was wholly honoured, privileged and a tiny bit humbled to be invited and help keep the British end up in celebration of a movie legend, sartorial god and childhood mainstay.

Roger Moore and Pinewood Studios are a synonymous pairing – like a pressed shirt and tie, a choc ice on a stick or pork pies and ketchup (some of Roger’s favourite things). The studios were part and parcel of his

career, his administration, his working heart and his movie soul. It now makes total and apt sense that a sizeable and gleaming new studio on Pinewood’s brand new site should be dedicated in his honour. Standing tall on the skyline and not a million miles from the famed 007 Stage, The Roger Moore Stage will now shine a literal and production light on British movie making production for many decades to come. From the man who more than once propped up British movie production and exhibition through its quieter, less sure times, now Sir Roger Moore is flanking the next generation of UK movie makers. Pinewood Studios has proudly announced, “Pinewood is honoured to have dedicated and named one of its newest stages after the late Sir Roger Moore. It will be forever known as ‘The Roger Moore Stage’ … Nobody did it better.”

For a slim figure, share your food with the hungry.
For beautiful hair, let a child run his or her fingers through it once a day.

With an official, virtual and oddly powerful unveiling of the stage by HRH Countess of Wessex kicking off proceedings, a grand gathering of friends, family, grandchildren, colleagues, producers, neighbours, Bond actresses, crew members, drivers, stuntmen, tailors, editors, co-stars, lyricists, RADA alumni, presenters, charity allies, onscreen villains, FX heads, henchman, Hollywood peers and – yes – at least one Bond writer filled both the wooded Ballroom and Pool Room at Pinewood’s Heatherden Hall. As it was a private occasion marking not just the public personas of the man and UNICEF Goodwill Ambassador, but also his less public role as husband, father and grandfather, some of the details understandably need not be included here.

But suffice to say, Dame Joan Collins, Sir Michael Caine, David Walliams, violinist Julian Rachlin, Bond producers Barbara Broccoli and Michael G Wilson, the day’s compere and long-time proud manager Gareth Owen and others all lent their kind, amusing, poignant and often candid remembrances of working with, knowing and spending a life with Sir Roger. With more Bollinger flowing generously than a Max Zorin garden party, the event very quickly evolved into a markedly relaxed and chatty affair – an English garden party of sorts only Pinewood and its 1930s landscaping can provide. Julian Rachlin’s string quintet set the tone with stirring recitals of Vivaldi’s Four Seasons (most apt for this Roger and A View to a Kill fan), Bond tribute troupe Q The Music powered out their disco-savvy rendition of Bond ’77 and a trio of Roger’s vehicular co-stars graced the Pinewood lawns and many a guest’s photo memento.

As you grow older, you will discover that you have two hands. One for helping yourself, the other for helping others.

With the totally incongruous Great British Bake Off shooting behind the garden hedges – yes, this guest suggested a new rival show The Great British Berkoff to muted/no applause – and peaking the interest of at least one A-lister or two unable to hide their TV guilty pleasure (presenters Noel Fielding and Paul Hollywood even rocked up in a golf buggy to pay respects in one the day’s more surreal moments), what was particularly striking was the easy warmth and levity of the celebration. There were emotions naturally. But they were carried by the humour and grace of the main star of the day – the one who had already exited stage-left and driven his burnt yellow Brett Sinclair DBS to that big Moonraker in the sky. He was the lead of every conversation, suit check, warm recollection and working anecdote.

Perhaps the most fitting remark of the day was indeed made by Roger himself. It was a sentiment he held dear and one which closed his final ever public performance at An Afternoon with Sir Roger Moore at London’s South Bank Centre in November 2016. Time Tested Beauty Tips by the humourist and writer Sam Levenson is a striking poem to a granddaughter which Roger discovered through his UNICEF Ambassador inspiration and friend, Audrey Hepburn. It is for all the world’s children as it recounts how the older you are the more you learn the benefits of giving others a helping hand, however small. That was Sir Roger Moore. If he wasn’t buoying up the fortunes of film studios, the box office and movie fans memories the world over, he was playing the most important role in his life. And it wasn’t James Bond 007. Or Simon Templar. Or Brett Sinclair. It wasn’t even Harold Pelham, Captain Stewart or Rufus Excalibur Ffolkes . It was one Michael Caine reminded us all why Roger received his Knighthood in 2003 – it was in recognition of his most crucial role as advocate for the world’s children. Bond allowed Roger to see the world. Yet, he was acutely aware he didn’t see the real world of struggle, disease, poverty and how the smallest gesture can make the biggest difference. Yet, Sir Roger Moore, born in Stockwell to a policeman, did go on to make a difference. It is a difference that sees his efforts not just blossom on a soundstage, but the world’s stage. 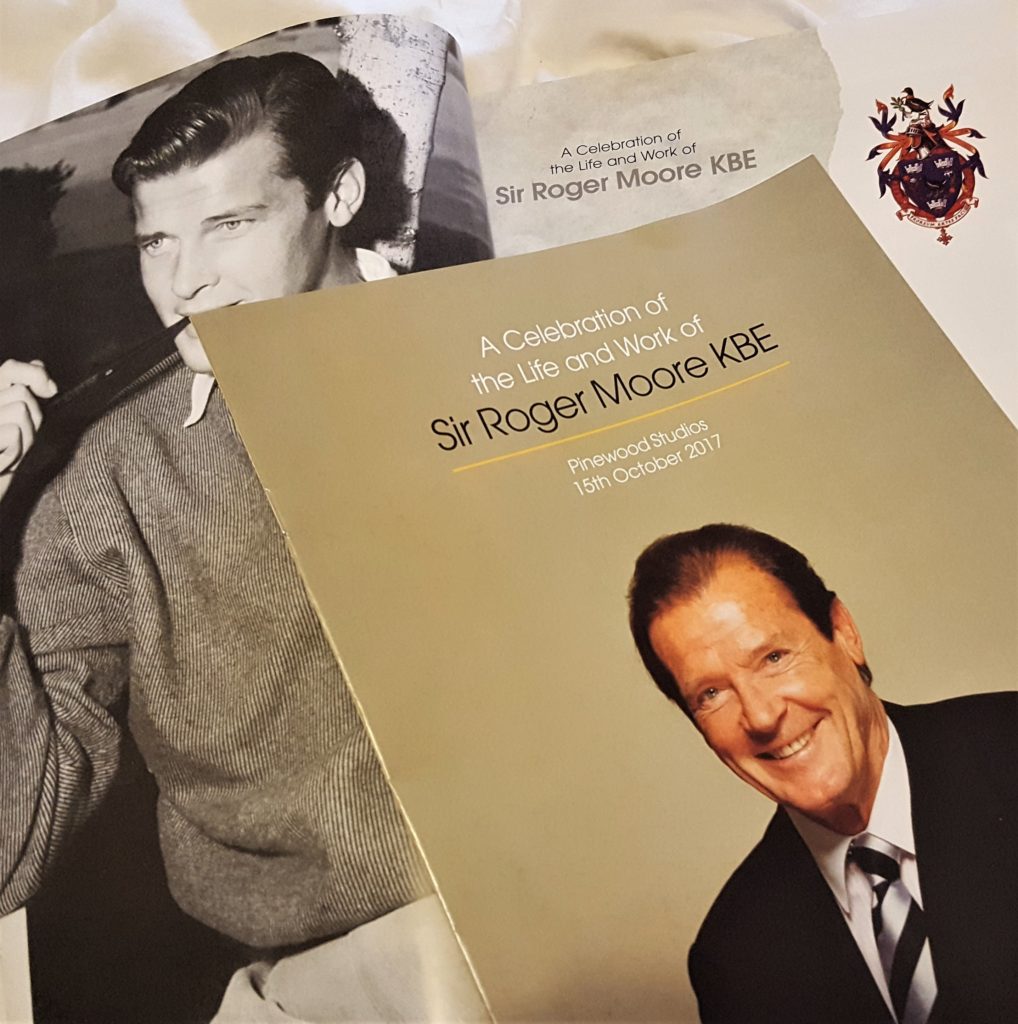 Thanks to Gareth Owen and his team, Lady Moore, Geoffrey, Deborah and Christian Moore, David Walliams, EON Productions, Pinewood Studios and all organisers and contributors.

More photos of the day can be found here.