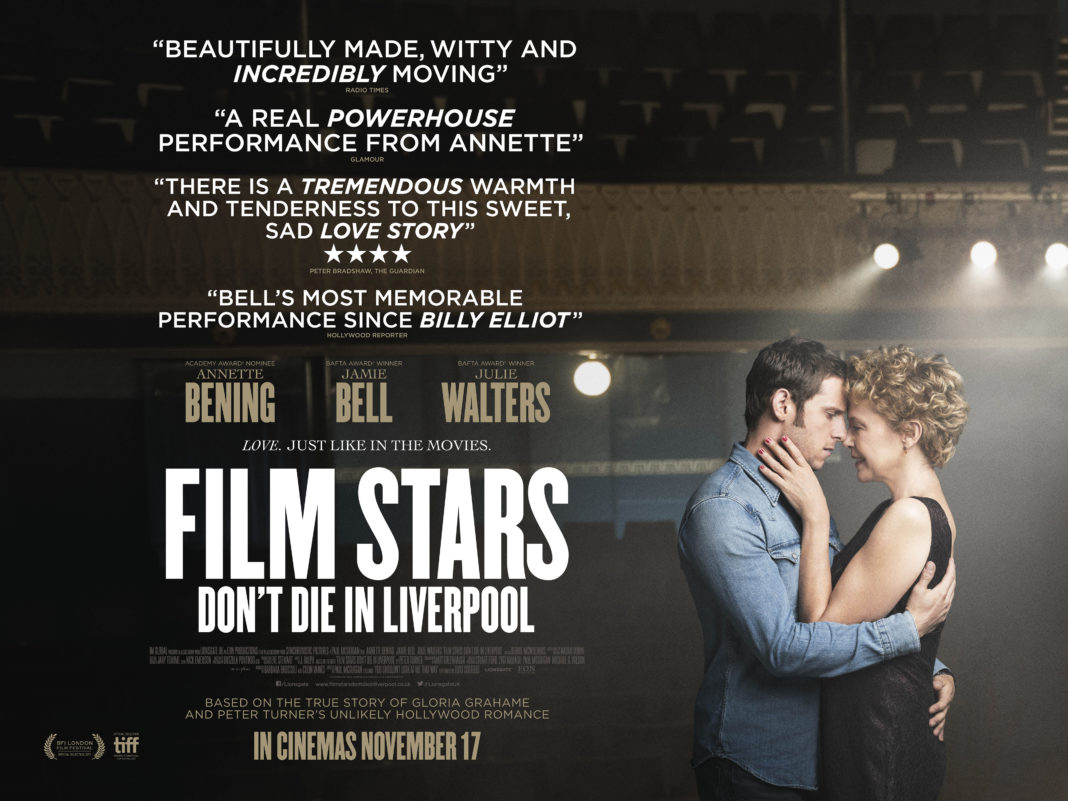 ‘Life isn’t everything’ chants Elton John towards the end of 1978’s Song for Guy and the beguiling dressing room opening gambit of Paul McGuigan’s Film Stars Don’t Die in Liverpool. But life is everything if you don’t have much left of it, especially if yours has always been seen through the lens of 1950s Hollywood.

You’re the next door guy, right?

It is 1979 and Academy Award winning actress Gloria Grahame (The Bad and the Beautiful, The Big Heat, Sudden Fear, Oklahoma) is staying in theatrical digs in London whilst touring The Glass Menagerie. Across the corridor is the lesser billed Peter Turner – a fledgling Liverpudlian actor working his way through rep and his twenties. An icebreaking chat about Saturday Night Fever and a dance around the vinyl later and so commences EON Productions’ newest, richest and most accomplished non-Bond project to date, Film Stars Don’t Die In Liverpool. Based on Turner’s own short-lived, but clearly long-loved relationship with Grahame and the subsequent 1987 memoir it encouraged, Film Stars is a brilliantly pitched exercise in character and the ones we present – whether we have been Humphrey Bogart’s co-star or not. Grahame may have starred in It’s A Wonderful Life, but that doesn’t imply she has a great deal of her own left to live.

Could you take me to Liverpool? I could get better there. 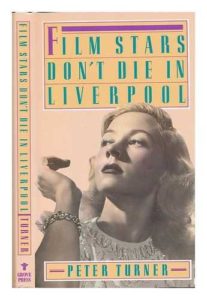 Screenwriter Matt Greenhalgh (Nowhere Boy, The Look of Love, Control) is no stranger to adapting and crafting real-life English stories in the often back-alley world of Seventies Britain alongside the tragedies the beginning of the Eighties often represents for his characters. Adapting Peter Turner’s heartfelt book with the same non-linear skill that is all over Control, Greenhalgh and director McGuigan (Sherlock, Gangster No. 1) take the simple story of doomed love across the oceans [and generations] and steer it into a beautiful portrait of having to face the final credits before all your scenes are in the can. But this is not a Hollywood biopic. This is a not a film about celebrity. Nor is about a fall from grace or even a clash of cultures thousands of movie miles apart. Los Angeles is a side character to a spare room in Liverpool and terraced street Britain is not presented as a poorer flipside of LA. The very opposite in fact.

Annette Bening’s stellar turn as the ill-fated Gloria is easily a career highlight. In taking a golden age Hollywood player and bypassing her attempts to find the fountain of youth under the doctor’s knife that purportedly haunted Grahame’s perceptions of herself, here Bening scales it back to show a free-spirited soul not afraid to talk to the Northern lad across the corridor. Bening’s Grahame is an ever-waning breath of fresh air who laughs her way through Alien at the pictures despite the audience terror around her, rolls her eyes at the entrance-needy habits of ‘Liza’ in celebrity-loving restaurants, still wants to play Juliet and has no qualms bedding down with a Liverpudlian family led by Turner’s parents Julie Walters and Kenneth Cranham. Actresses have won the Academy Award for much less than the close-up honesty and heartfelt candor Annette Bening brings to Grahame in this role. When Film Stars closes on a real-life moment of Grahame accepting her Academy Award for 1952’s The Bad and the Beautiful her famously brief, coquettish acceptance speech 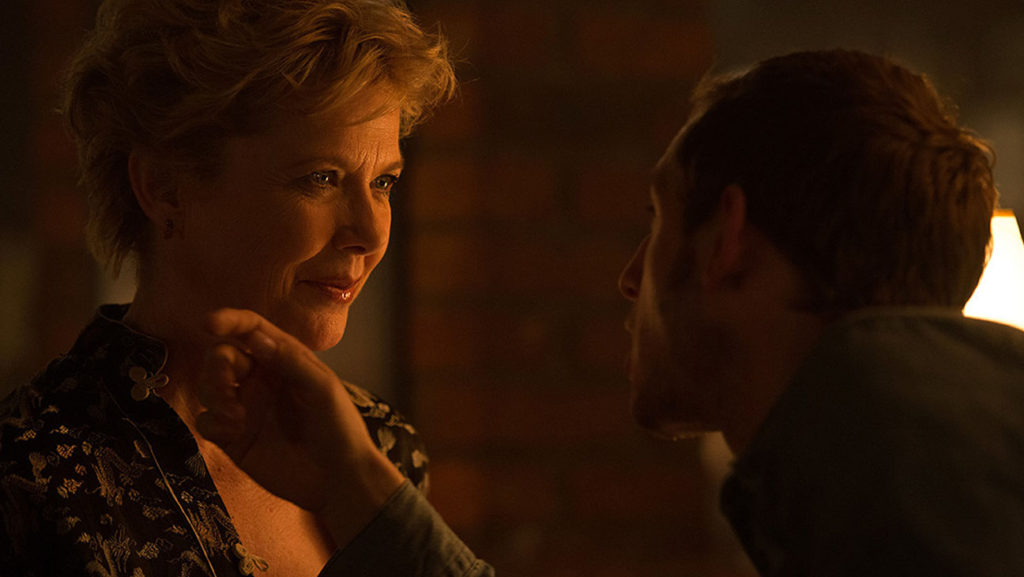 is exactly the Gloria that Bening has carefully opened up for us. This is not about likenesses. This is about resembling a truth – the very tenet of the movies. And whilst McGuigan and Greenhalgh sidestep some of the richer details of Grahame’s previous real-life romances and decisions, Bening imparts a performance where they are always part of that character’s past and psyche. Film Stars Don’t Die in Liverpool is always about economy. We don’t need Sunday night drama angst about why Grahame lives a very non-Beverly Hills life in a humble beach trailer she has made home. We don’t need the clash of cultures or suggestions of a lack of luxury when Bening moves in with Julie Walters and Kenneth Cranham. We don’t need to have star-struck parents marvelling at the Hollywood star in their humble home. She is always their son’s girlfriend – which only adds to the poignancy as Elton John’s Song for Guy continues to haunt the soundtrack with mix-tape skill. However, a bit more Vanessa Redgrave and Francis Barber as Gloria’s mother and Baby Jane-bitter sister would be no bad thing.

Reunited with the Northern back alleys and Julie Walters of 2000’s Billy Elliot, Jamie Bell (6 Days, Filth) provides a solid, practical counterpart to Gloria’s tragic hope and coping mechanisms. A searing last-act scene involving a repeated flip of what we thought we saw is as much about him as her. Bell’s Peter is open about his own past, boyfriends and acting prowess. Again, there is never the suggestion that Peter is lucky 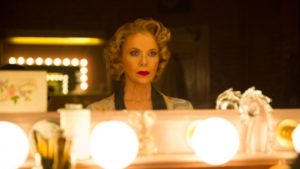 or an endearing, audience friendly fish out of water. This is a May to December, Pacific Coast Highway world of Harold and Maude meets Educating Rita. Furthermore, this is also a knotted pine-panel backdrop of Alan Bleasdale, Willy Russell, the Labour social club and yesteryear regional theatres courting yesteryear stars. The counterpoint American scenes are deliberately fantastical. They are meant to hold a back-projection glory. Cinematographer Urszula Pontikos (Weekend, Lilting) imbues America with Technicolor hues, the vestiges of Fifties Americana and the suggestions of space and open expanse. Whilst production designer Eve Stewart (A Cure for Wellness) lends the British scenes the same sense of story purpose and containment she gave the walls and corridors of The King’s Speech and The Danish Girl, there is a familial warmth to Bell’s home – and all offset by Julie Walters’ kind and Manilla-fretting turn as Mrs Turner. This is a world of cassette tapes, rubber plants, disco tunes and that late 70s reverence to the Royal Shakespeare Company (which any British drama student of the 80s can testify to). Likewise, the apt decisions of costume designer Jany Temime (Skyfall, Gravity, Spectre) reflect the production design’s coy choices in not overdesigning the period of the piece. This is a knitted 1980 world of zip-up tops, patterned dad cardigans, long collars and Purdey cuts. Yet, none of it overbalances a film whose inevitable tragedy is signposted from its opening credits towards a tear-ladened last act and a final switching off of the back-projection surrounding Gloria Grahame’s own very sad and heartfelt denouement. 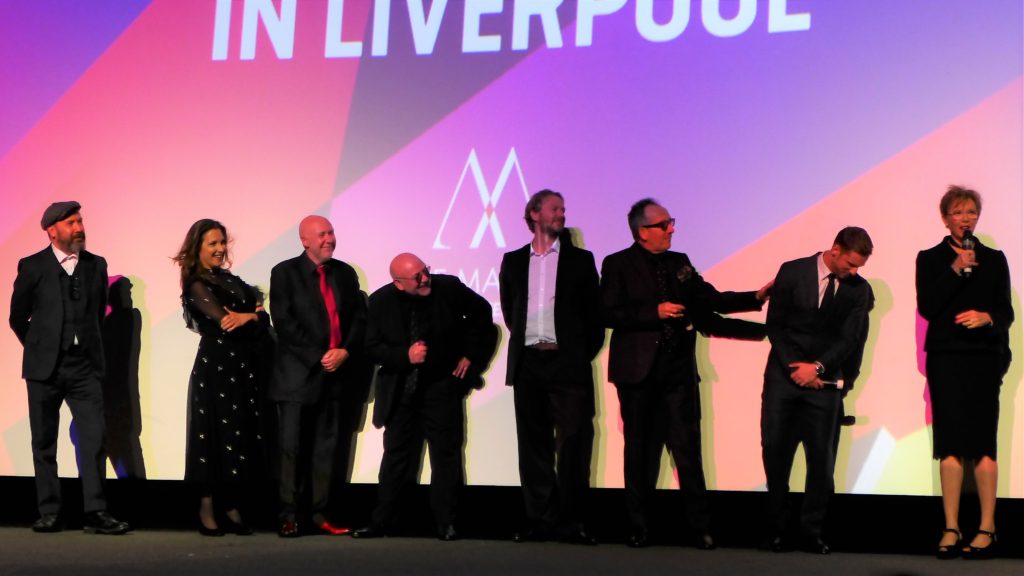 Produced by Barbara Broccoli (The Silent Storm, Spectre, Radiator) and Colin Vaines (Gangs of New York, My Week with Marilyn) in collaboration with 007 creative house EON Productions, this is a movie where a great many Bond alumni have once again successfully stretched their moviemaking wings in very different directions. And they should all be justly proud. It is also the second project of 2017 that sees Barbara Broccoli look at the dressing room realities of old Hollywood (following the Royal Court’s The Kids Stays in the Picture earlier in 2017). But we still have a wilfully designed opening title sequence. We still have the production backdrop of Pinewood Studios. We still have the starter pistol of a premiere at the famed Odeon Leicester Square. And Film Stars Don’t Die in Liverpool even has its own end-credits theme tune performed by Elvis Costello (who wouldn’t be totally wrong for Bond…just sayin’).

Film Stars Don’t Die in Liverpool opens in the UK on November 17th and in the US on December 29th 2017. 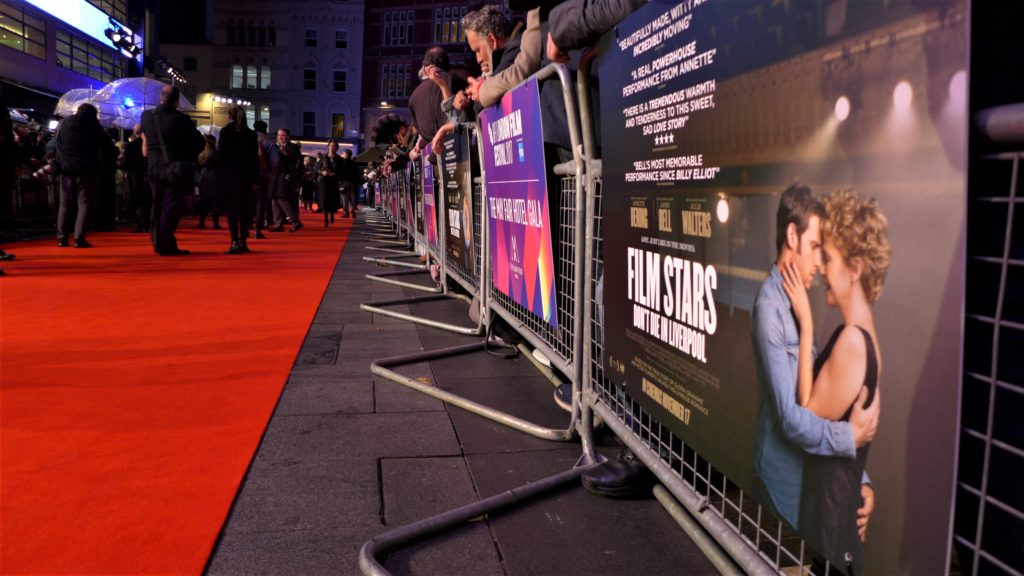 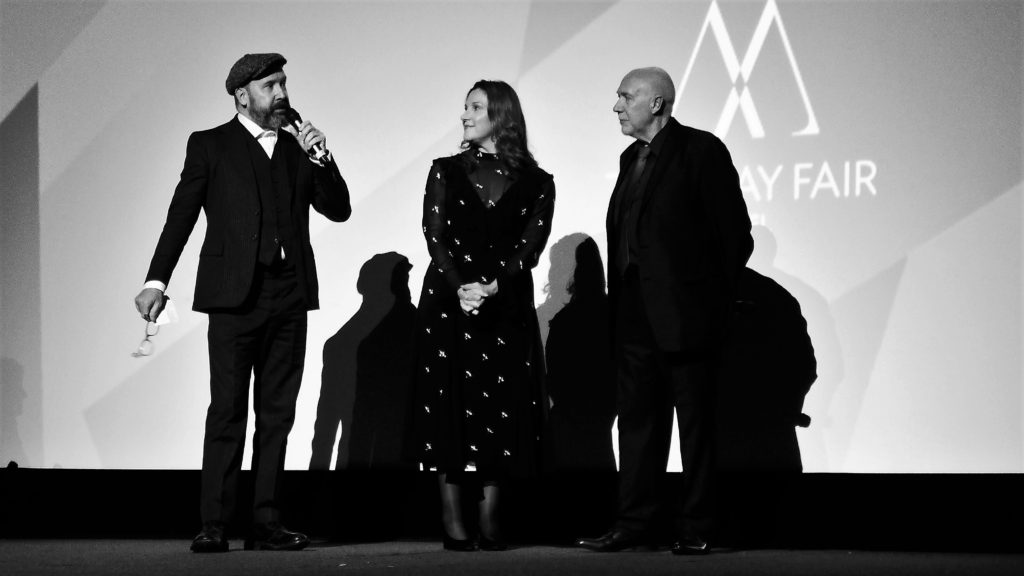