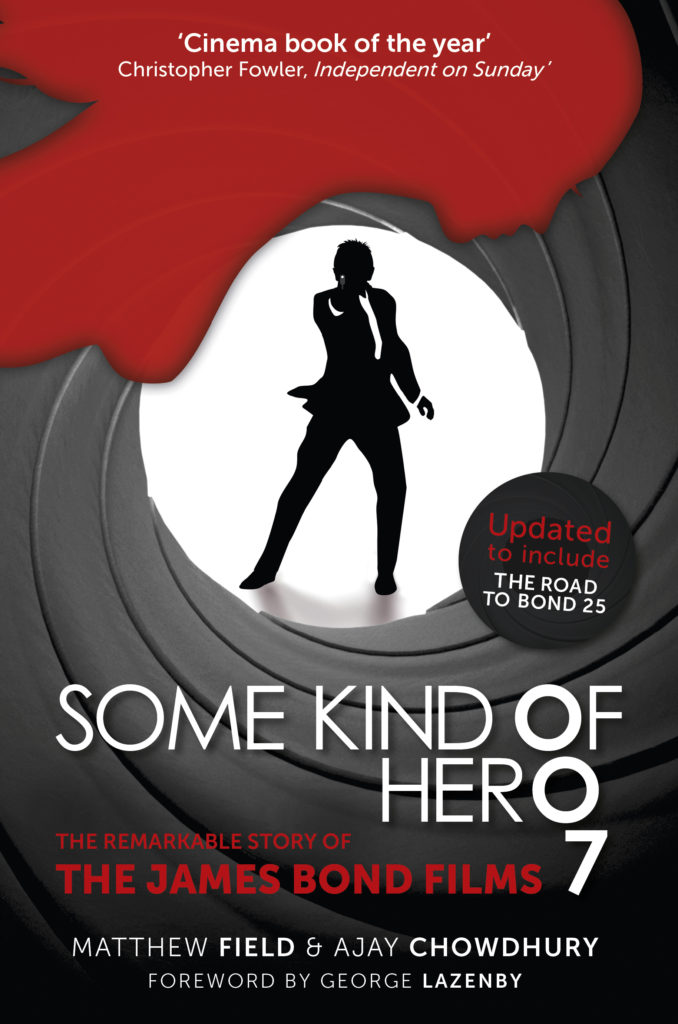 Clearly taking Ken Adam’s gargantuan volcano sets as its inspiration, the new edition of Some Kind of Hero – The Remarkable Story of the James Bond Films is a mammoth tome. And just like Adam’s famous Bond design work, this new work is redolent of effort, savvy and a knowing swagger as to why it should exist. Written by Matthew Field & Ajay Chowdhury, Some Kind of Hero is an exhaustive, sweeping and far-reaching account of EON Productions movie output. It is about the personalities, ambitions, talents and happenstances that got – and continue to get – these cultural touchstones made time and time again.

Film PR man Matthew Field wrote The Making of The Italian Job (2001), Michael Caine – You’re A Big Man (2003) and co-wrote Blade Runners, Deer Hunters and Blowing The Bloody Doors Off (2008) with producer Michael Deeley. Ajay Chowdhury is a media lawyer and producer with an extensive understanding of movie finance, production contexts, rights, contracts and the realities of getting stuff made. Together they originally crafted and have now updated this weighty 2015 labour of love “based on over 120 primary interviews” and countless more articles, publications, websites, radio and television shows. Oh – just as Chowdhury and Field mourn how an eleventh hour contribution from Sean Connery just came too late to be included first time round (blame the Bahamian mail service),  but former 007 George Lazenby provided the opening overture to the 2015 edition with his Foreword and more interviews and insight has now been added since 2015.

Broken into chronological chapters surrounding each film and using pertinent title song lyrics to suggest the essence of every 007 movie, these instalments not only sound like Ian Fleming titles, they also pay coy tribute to the relevant production context up for discussion. ‘I Must Return’ from Bond’s second movie From Russia With Love says it all and ‘From The Shadows As A Child’ for GoldenEye perfectly pitches how this was the film which producer Barbara Broccoli particularly came wholeheartedly into her own as co-producer (though, as Hero, rightfully underscores – she was always involved).

But this is not a wholly linear look at the films themselves. Chowdhury and Field’s mission here is not just to detail a biography of 007 film production, but what happened in-between. The story of Bond onscreen is equally the story of what never made it to the screen. And why.

Field and Chowdhury provide chapters looking at Ian Fleming and the genesis of Bond onscreen (and the genesis of Fleming’s vision for an onscreen Bond – often very different kettles of killer piranhas), the mid Sixties Bond mania, Never Say Never Again bit Connery as much as the Broccolis, how the once prized Broccoli / Saltzman dynamic came to an end and how Bond had to steer his very existence through it, what happened in that six year gap of no Bond movies between 1989 and 1995 (Bond was once again steering for his life) and how exactly Timothy Dalton’s third 007 outing could have panned out if the fates and timings had allowed. Granted access to both the scripts and the luxury of hindsight, Some Kind of Hero looks at the proposed production mechanics for Bond ’91, its story beats and what might have been the third of a Dalton trilogy. The delicious prospect of it being a Cubby, Barbara and Michael Wilson co-produced effort is one of many tragic could have beens. Some Kind of Hero also now looks at the genesis of the 2015 Bond film Spectre, the Road to Bond 25 and a pause to remember the passing of Sir Roger Moore, his legacy and his Pinewood Studios memorial day.

Likewise, the book pores over Die Another Day’s aborted Jinx spin-off, how director Stephen Frears was very keen, how it was hoped Javier Bardem could be cast as Halle Berry’s love interest, how the movie’s eventual cancellation was a body blow to Barbara Broccoli and the Bond team and how – as Some Kind of Hero knows too well – the experience was possibly vital for EON Productions and the path and thinking that led ultimately into 2006’s critical darling, Casino Royale.

Some Kind of Hero is as much about the publically unknown, but vital “legendary fixers”, those men nicknamed “Mr Fixit”, how EON carefully “promotes from within”, the casting accidents, stolen conversations at drinks parties and how it is not just the Swiss Alps which Bond has had to navigate in an emergency – it has been Swiss financial and tax laws too. Field’s PR experience shows in the delicious detailing of budgets, casting solutions, script revisions and location incidents. Likewise, Chowdhury’s legal penchants showcase how the story of EON Productions is as much the story of protected legalities, defended creative rights and safeguarding business shares as it is James Bond 007.

“From being one-half of the most successful independent production duos in film history, Albert R. Broccoli found himself shackled to a huge, corporate behemoth as his business partner. The repercussions would echo for decades to come”.

‘Two Scorpions In A Bottle’ – Broccoli Vs Saltzman

Some Kind of Hero

Of course those fans and readers desperate for new insights, facts and anecdotes will not be disappointed. Even the most 007-marinated scholar will easily find something new to illuminate their own knowledge. And how Spectre could have started is a delicious ‘what-if‘ maybe we’ll see again in a later Bond movie. But did you know the lyrics to You Only Live Twice‘s title song were written in Kirk Douglas’s study, Connery lent his voice to a Chaplin film, an early draft of the Moonraker screenplay featured a “bow and arrow wielding heroine” called The Archer, Priscilla Presley was nearly in a Bond movie, screenwriter Richard Maibaum would always first write his scripts in longhand, the [then] studio and Hollywood race politics tried to leave black actor Yaphet Kotto out of the press junkets for Live and Let Die and George Lazenby was nominated for a Golden Globe way before Adele got hers. And this is – as Pierce Brosnan might never say again – merely the tip of the iceberg.

For this writer, it is the colour provided by secretaries, publicists, title designer Maurice Binder’s assistants, un-credited technicians, John Barry’s backroom panics, location scouts, agents, second editors, the studio memos, curt letters and the Mayfair haunts of Broccoli and Saltzman where this work really comes alive. This is not a book obsessed by the inaugural years of Bond and Eon off Curzon Street, but by Lord it recounts them lovingly and with an attention to detail the whole book echoes.

From the start, Chowdhury and Field say they “have deliberately refrained from reviewing the films”. And they don’t. But Some Kind of Hero is still replete with opinion, of support for the Bond movie making machine as well as – more importantly – an understanding of it. Amidst the slavish footnoting and references, the pair make curious, but shrewd observations about the Bond films. An example close to Catching Bullets – Memoirs of a Bond Fan’s heart is less that my book’s ‘co-star’ and grandfather Jimmy O’Connell gets a kind acknowledgement but more that – despite its detractors – 1985’s A View to a Kill is correctly circled for being one very close to the Broccoli family.

“If any of the Bond films featured the DNA of Cubby Broccoli running through them, none did more so than A View To A Kill.”

‘Phoenix For The Flame’ – A View To A Kill, Some Kind of Hero

This is a book that makes concerted efforts to underline how it is not an official publication. And because it is not, it has the wider freedom to sketch out some of the working arguments, fatigued collaborations and personal politics at play over the years. Yet it does so throughout with reverence, respect and that crucial understanding of how movie people and their decisions tick – all the while knowing that Bond movie people maybe tick differently to the rest. The Bond behemoth has – inevitably – had its victims. Some Kind of Hero doesn’t shy from that and lets folk tell their opinions of events. But the Bond circus has also had plenty more victors – and none more so than the global audiences lapping up the current Bond, Daniel Craig. The now and 2019’s Bond 25 is very important to this book – especially since Skyfall‘s validating hold on the public and cultural zeitgeist. Field and Chowdhury wilfully steer their efforts to educate and illuminate we are now where we are with Bond because of what went before. Theirs is not a Sixties glory days love-fest or an Eighties bashing preach. It is forever remembering that Bond is now the world’s “Rolls Royce standard” of movie making.

The facts in this book speak for themselves – facts and insights that Field and Chowdhury are right to mention. Michael G Wilson has been a producer on the Bond series for longer than his step-father Cubby Broccoli ever was. Cubby’s wife Dana Broccoli was crucial to the family firm. And Roger Moore’s tenure – whilst battling diminishing budgets and studio enthusiasm – should never be overlooked in the survival of the Bond series.

The writing duo of Field and Chowdhury are – to use the modern parlance – superfans. But they are not super deluded or super reverential. Some Kind Of Hero is all about addressing the realities of movie making, the near-impossible challenge of writing a brand new 007 movie, the logistical mountain of shooting multiple units around the world and how what we see now with Bond’s second golden age has its genesis dotted back throughout the last fifty plus years, into Cubby’s Warwick Film years and before.

There is no forum-fuelled vitriol aimed at moved gunbarrel motifs, Madonna title songs and Die Another Day here. There is a production context to how our franchises are made. It is not about the gatekeepers allegedly getting Bond wrong (as those fan forums obsessed with where exactly twenty seconds of dancing white dots should go are wont to suggest). The Bond movies forever operate in a world of creative and financial flux. Even now as Danny Boyle’s Bond 25 begins revealing itself to the world, production contracts and the future with  is being worked through for future scrutiny. Some kind of hero. Some kind of longevity. Some kind of book. Much recommended.

With thanks to The History Press.