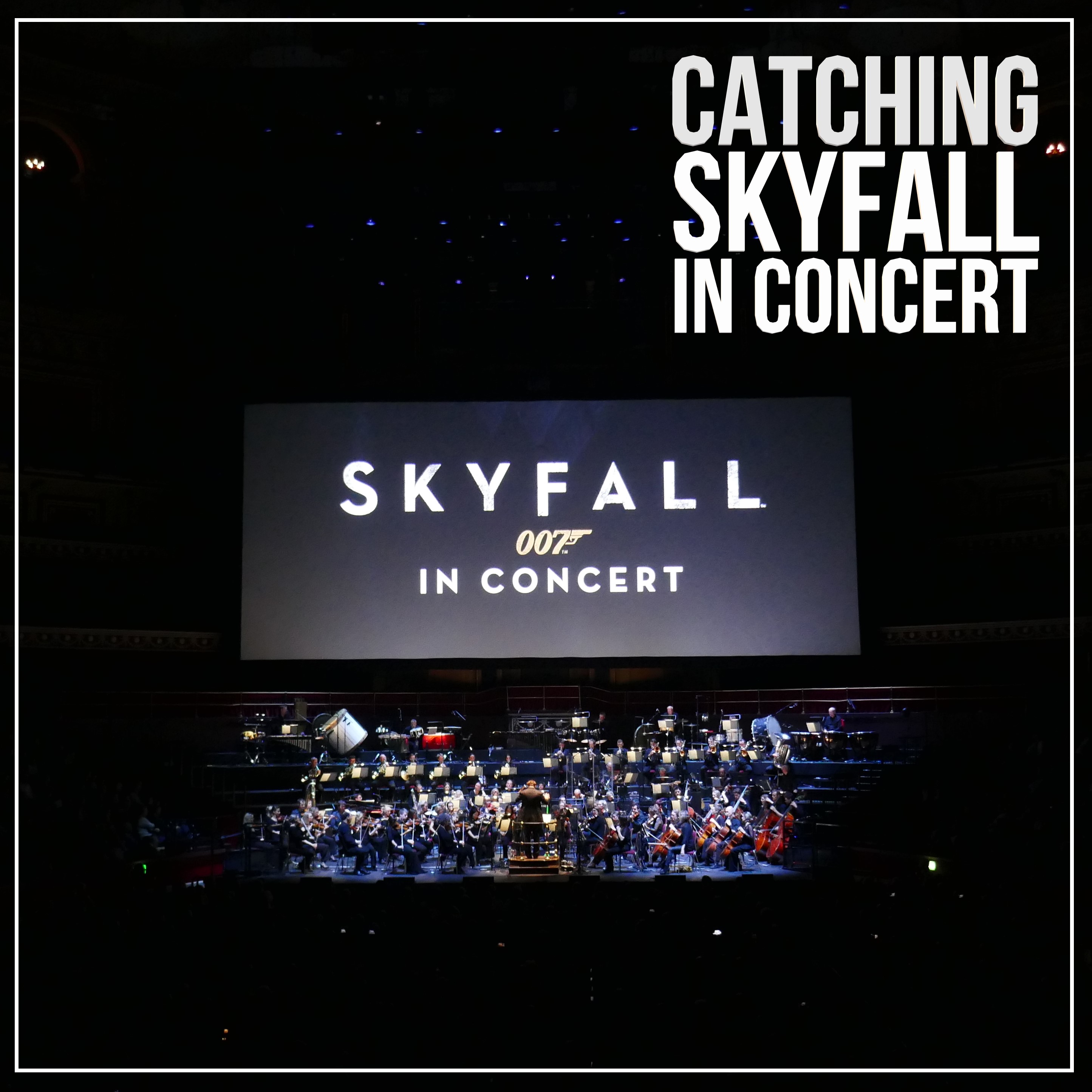 This is the end.
Hold your breath and count to ten.

There are not many times you get to witness a live concert of a Bond film in the nearby presence of ‘M’ herself. However, on the opening night of the world debut of Skyfall in Concert at London’s Royal Albert Hall it made total sense that Dame Judi Dench was in attendance to witness her bespoke swansong scored by the Royal Philharmonic Orchestra, conducted by movie composing royalty and in the same venue that housed Skyfall‘s triumphant royal world premiere Double-O-Seven years before. And yes – ‘M’ loved it.

Skyfall in Concert marks the second symphony of Bond’s live concert adventures. In October 2017, Casino Royale in Concert saw the first entrance of our man James into the live movie music world. It not only hit the ground running. It continues to play across the world’s concert and music halls today. As one of an ever-popular series of taking beloved movie standards and transporting them back to the communal and concert sense of cinema that is the very DNA of movie exhibition, Skyfall in Concert also marks the first time a Bond score by Thomas Newman has received such a live podium. From the opening shot notes framing that blurred Bond navigating bloodshed in Istanbul to the powerful Turkish guitars and quickfire percussion as Bond and his various modes of transport cascade towards Adele’s Academy Award winning title song, it is clear this is a score from one of cinema’s most measured tunesmiths.

Composer Newman has re-pointed the sound of post-millennial cinema with an American melancholy (Angels in America, American Beauty, Road to Perdition, How to Make an American Quilt), and often with a sense of local folk influence (Fried Green Tomatoes, Victoria & Adbul, The Best Exotic Marigold Hotel), ’80s synths (The Lost Boys, Less Than Zero) and narrative introspection (Wall-E, Meet Joe Black). A seven-time collaborator with director Sam Mendes (the pair are currently working on 1917), Newman was always a big choice for Bond. Yet, as the Royal Philharmonic Orchestra and the tirelessly energetic conductor David Newman (Tom’s composer brother) proved, Bond is big too. Having spoken to sibling David in the rehearsal days run-up to Skyfall in Concert, he promised that an audience will hear new elements and different sounds. He highlights how ‘it’s a different environment. You’re going to hear things you don’t hear in the film because it’s live or they might have turned things way down in the film and sometimes the composer augments it a little bit because it’s live. Or does this or that. To me you get to hear the music in its original context.’ And within seconds of that pounding Turkish opener, Dave Newman was most right. This is a wholly renewed live arrangement that lets those ethnic tics and lost strings be heard above the action puff and third-unit bluster of a Bond pre-title sequence. This is an orchestra and live project that pulls back the deceptively simple veneer of brother Tom’s score to lay bare the complicated underlays and layers of music and sound those theatrical and domestic screenings sometimes miss.

‘It’s the liveness of it. It’s so different when it’s live. And that is the goal.’
David Newman, conductor of Skyfall in Concert at the Royal Albert Hall 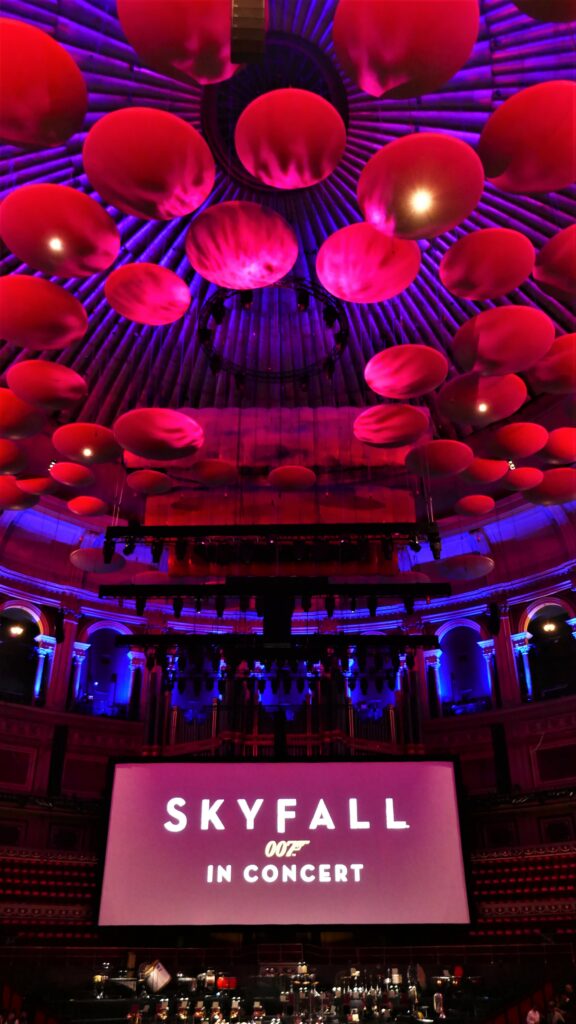 When we sometimes lament the distance between the classic Bond sound of John Barry and today, it is easy to overlook how Skyfall has that. And it curiously takes a live orchestra with the size and skills of the Royal Philharmonic to bring out and remind of those jazz-band Bond sounds with their solo guitars, concurrent brass, dominant percussions and retro-minded bongos. For a composer that often centres his pieces to a sense of milieu and mood, the Philharmonic and David Newman underpin the precision of brother Tom’s Skyfall score as those Asian crashes and tides embark the audience into the lair of Silva and Hashima. In a Bond era where the title song is sometimes left aside from the main score, the powerful slithers of Adele’s title song as Bond arrives at the Macau casino (one of producer Barbara Broccoli’s favourite beats of Skyfall) totally reclaims and reminds of how good that Academy-Award winning anthem is. As Bond floats towards one of the tightest, best played and coyly written scenes in Daniel Craig’s Bond tenure, Newman pilots those strings and fills the Albert Hall with that brilliantly unattainable sense of Bond aspiration and glamour. Newman’s strings duel with the ‘The James Bond Theme’ guitars and an almost Hammer Horror sense of gothic foreboding fills the Albert Hall with theatre and relish.

Feel the earth move and then
Hear my heart burst again.

Just as the strings and horns of ‘Tennyson’ and Bond’s frantic foot-chase through Westminster create a visceral, Craig-defining bookmark in Skyfall, here the live rendering greatens an already great sequence into a truly electric beat of the night. Just as that whole Whitehall enquiry scene is marked and elevated by the performances of Dench, Fiennes and 007 newcomers Helen McCrory and Lord Alfred Tennyson, it is also vitally held aloft by the Philharmonic’s panicked flutes, strings and those Cold War lutes. The sense of heraldry Newman gives the score is never more apparent than when Skyfall in Concert and the Philharmonic just break into urgent fanfare underlining a film that was not just a beat of Bond history, it was a keynote of British culture in a very British year marked by framing history with modernity. Newman’s debut Bond score reflects that, as did the Philharmonic. It is most apt to hear the Skyfall score regaled live in the most regal of music halls. As a symbol of Victorian resolve, the Albert Hall is itself a perfect accompaniment to Bond’s 2012 bullet with its union jacks, Prom night fixtures, busts of Tennyson’s contemporaries, Rule Britannia pageantry and close proximity to John Barry’s Cadogan Square address (that serves as M’s onscreen apartment in the film). It is a score recorded in London (Abbey Road Studios) that is always going to have at its heart the musical soul of London from a particularly London-centric year. Heard live, Newman’s compositions power that sense of British heraldry – and Bond heraldry – in one of live music’s most world famous cathedrals to composition and performance. And just as David Arnold’s beautifully elegant ‘City of Lovers’ elegance was goose-bumped to the back of the stalls during that Albert Hall premiere of Casino Royale in Concert in October 2017,  the Philharmonic continue that here as the ‘Severine’ and ‘Skyfall’ motifs of Bond 23 fill the sizeable arena with a stringed elegance and fluted femininity that every Bond score must have alongside the more bombastically masculine bells and whistles.

Obviously, being sat in very close proximity to Dame ‘M’ herself was certainly a plus for this bullet catcher (and her offer of keeping our satchel MI6 safe during the interval was beyond cute). Yet, as this live experience gradually reminds on the night, it is the female-steered musical cues that are the most memorable passages of Skyfall in Concert.  As David Newman teases and pulls his brothers oboes, clarinets and brass to ride alongside that establishing shot of Bond’s Aston Martin DB5 cutting through the Highlands in a Kubrick helicopter shot straight out of The Shining, you realise at the heart of the Skyfall score is Judi Dench. The melancholy woodwind of ‘Voluntary Retirement’ accompanying the January visuals of a cold London, the horns and impatient percussion of ‘The Bloody Shot’ and the dirty beats of ‘The Moor’ – it takes the Royal Philharmonic to underline and remind how, in many respects, Skyfall in Concert is M’s night too. And that is no bad thing for a Bond event like this that is frequented by as many women as men (not something that always happens on the 007 scene). Not that ‘The James Bond Theme’ is sidelined. As the double-tufted leather doors of Mallory’s office send Bond fans into a nostalgic frenzy all over again, Newman Does Newman Does Bond closes on a credits-free triumph – the Philharmonic hammering home one of the most famous pieces of movie music. With conductor Newman, his baton and suit jacket dancing excitedly to the jazz punches and brassy bombast of ‘The James Bond Theme’, the end note that Skyfall in Concert leaves you with is a reminder of how great a piece of cinema Skyfall is before it is a great piece of Bond cinema. As Thomas Newman emerges to take a bow with his brother, this Bond fan was already both swept away and stolen. 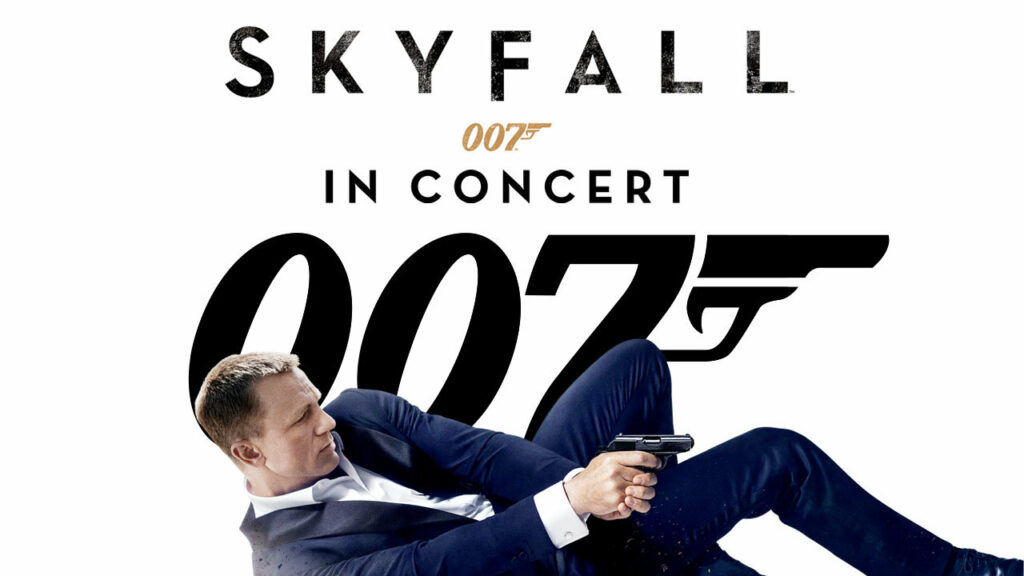 Mark O’Connell talks to conductor and composer David Newman ahead of Skyfall in Concert.

As the skies fall on the Royal Albert Hall and the orchestra assembles for Skyfall in Concert, a familiar co-star makes an entrance…