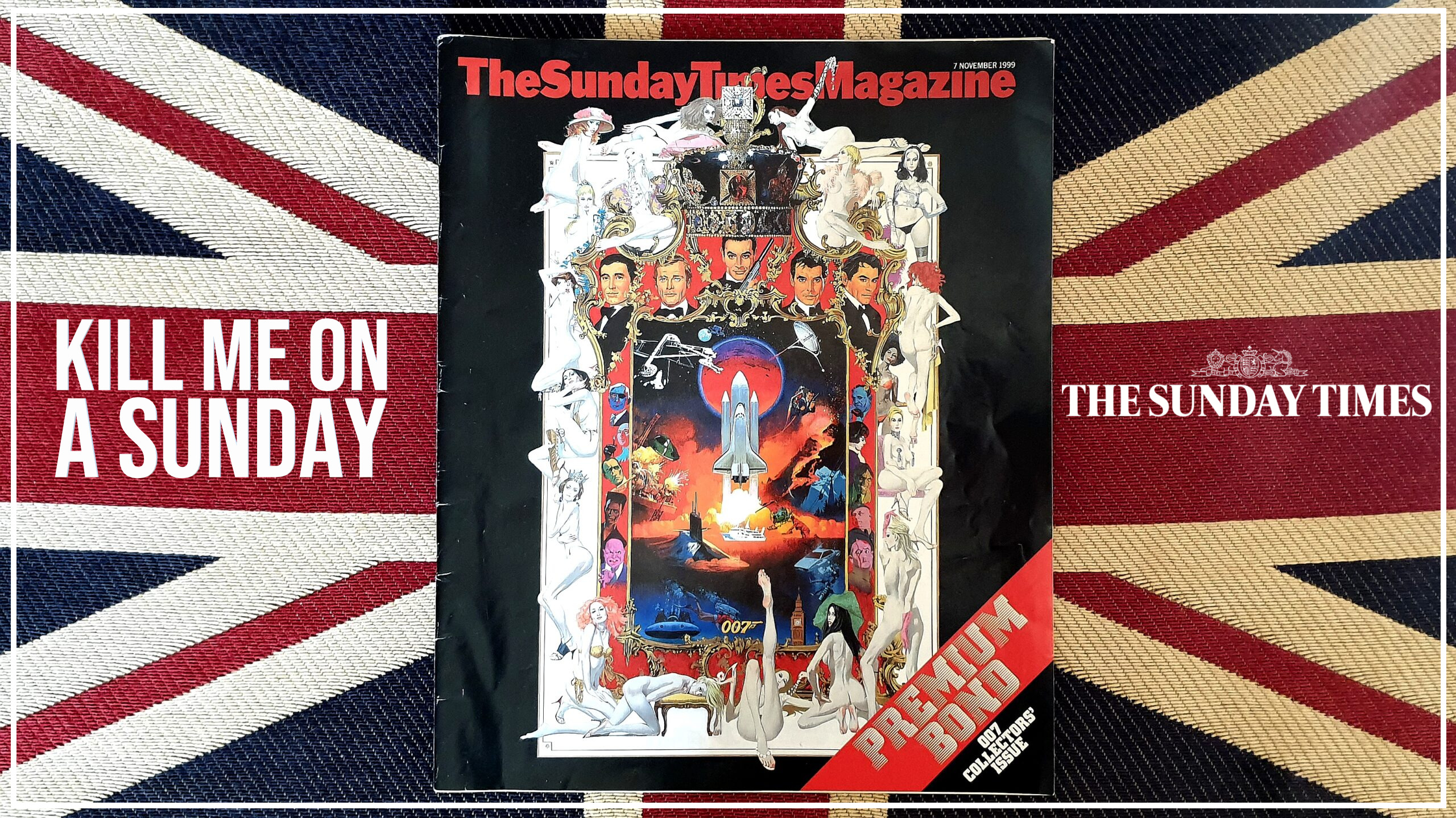 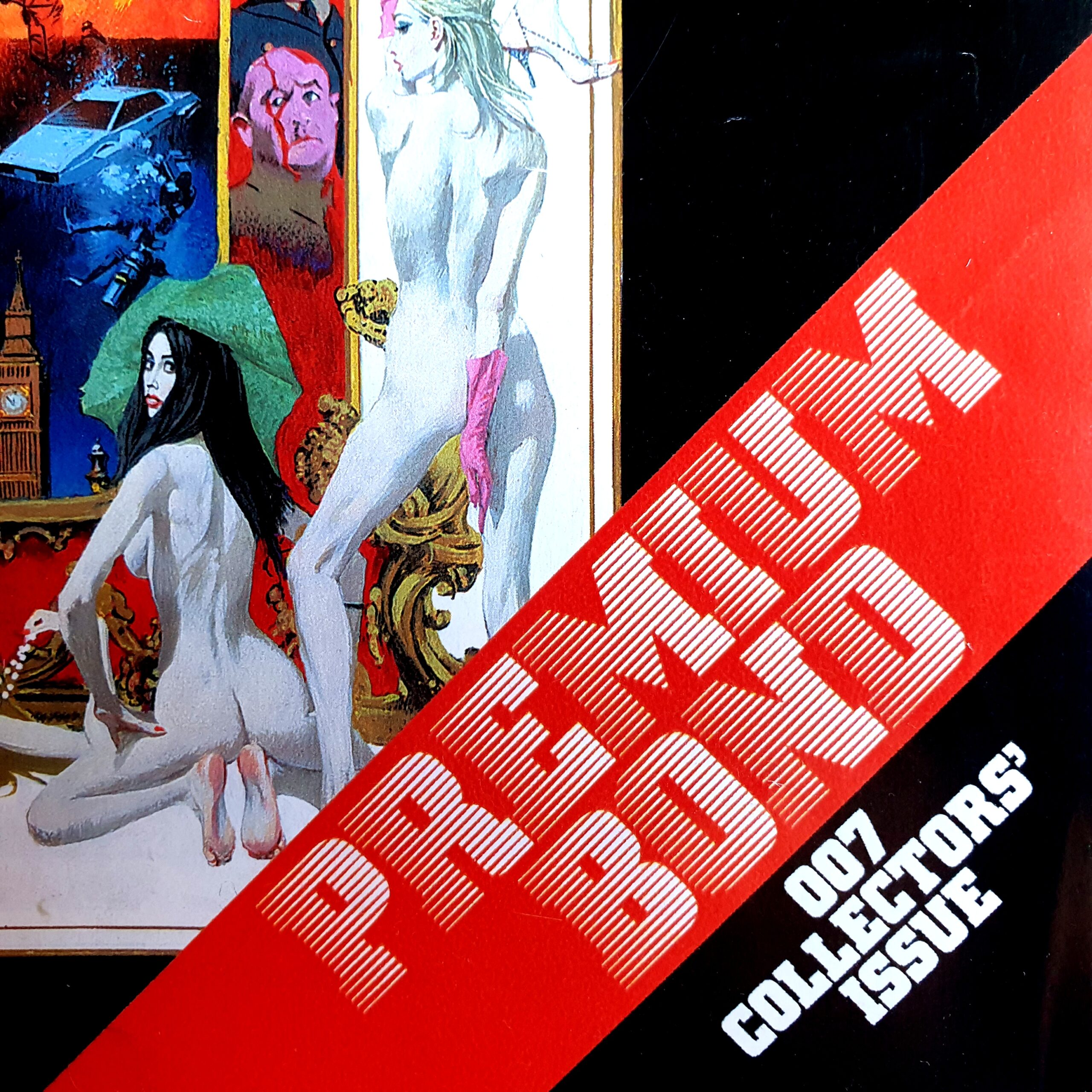 It is February 4 1962. As Bond’s first movie bullet Dr. No is shooting in Jamaica with author Ian Fleming in the wings, The Sunday Times is launching its first colour magazine. Fleming has already been a noted and celebrated Sunday Times journalist and his 007 novella The Living Daylights – ‘a new James Bond story by Ian Fleming’ – was first published in that debut February ’62 issue of the magazine. Originally titled The Sunday Times Colour Section, the inaugural publication also focused on the Swinging Sixties and London – with Jean Shrimpton, David Bailey and Mary Quant all showcased.  ‘A sharp glance at the mood of Britain… and a new James Bond story by Ian Fleming’ was its front page boast with Shrimpton taking photo lens centre-stage and hints at the Swinging London canvas that Bond too was about to thrive in. 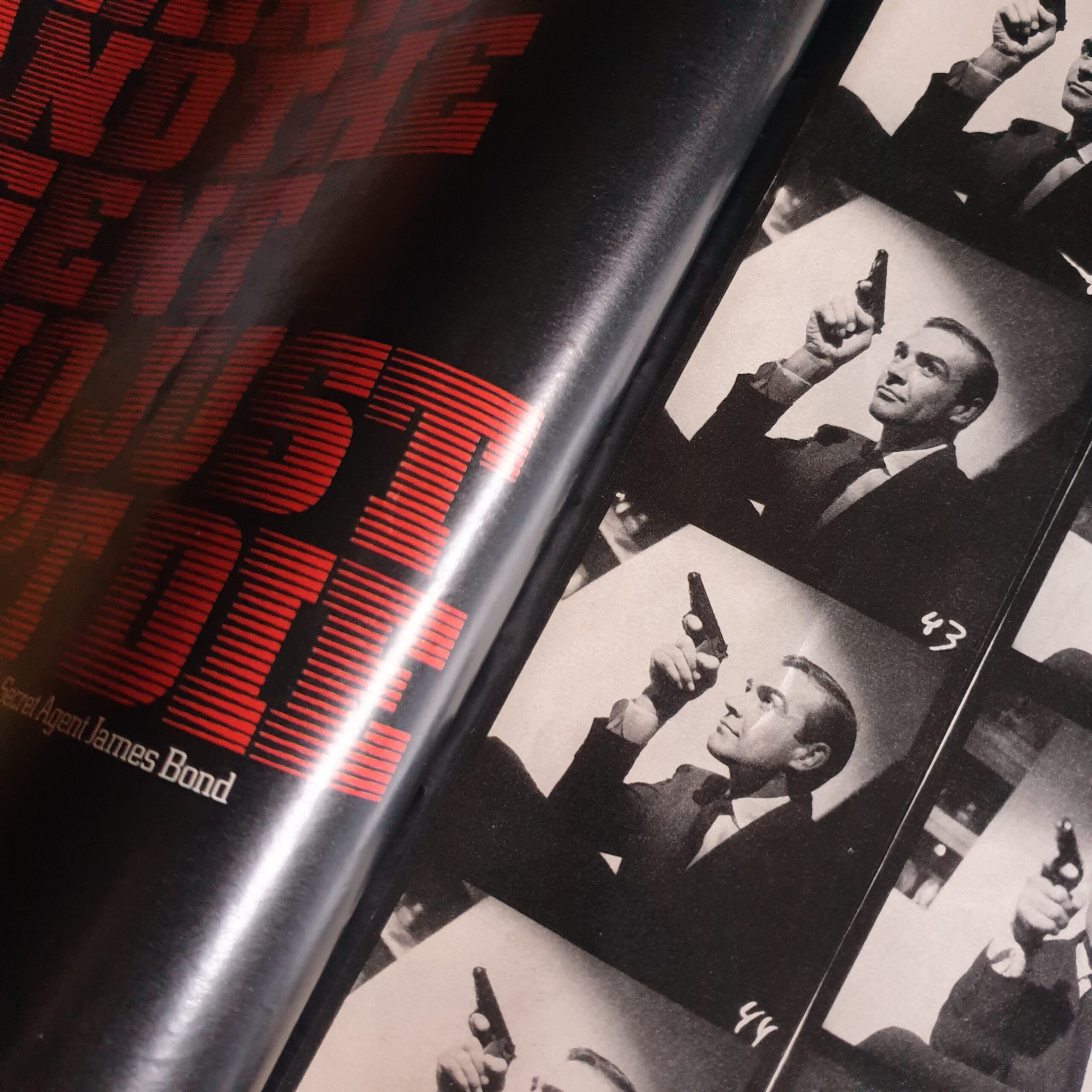 The launch mantra for The Sunday Times Magazine was ‘photographer first’ and such Bond photographers as Terry O’Neil were soon famed contributors capturing those 1960s and 1970s beats that Bond was often instrumental in. Many special editions of the magazine have marked many a pop culture, sporting, science and political moment in time – including one Commander Bond and his ongoing journey through cinema, literature and time.

Perhaps the most famous, beautifully produced and brilliant of The Sunday Times Bond issues was published on November 7 1999. Published to coincide with the imminent release of the last Bond bullet of the twentieth century (1999’s The World is Not Enough), the ‘Premium Bond’ issue went the extra Bond mile throughout. Years later it is still one of the most content heavy, detailed and lush commemorative issues 007 has been gifted. 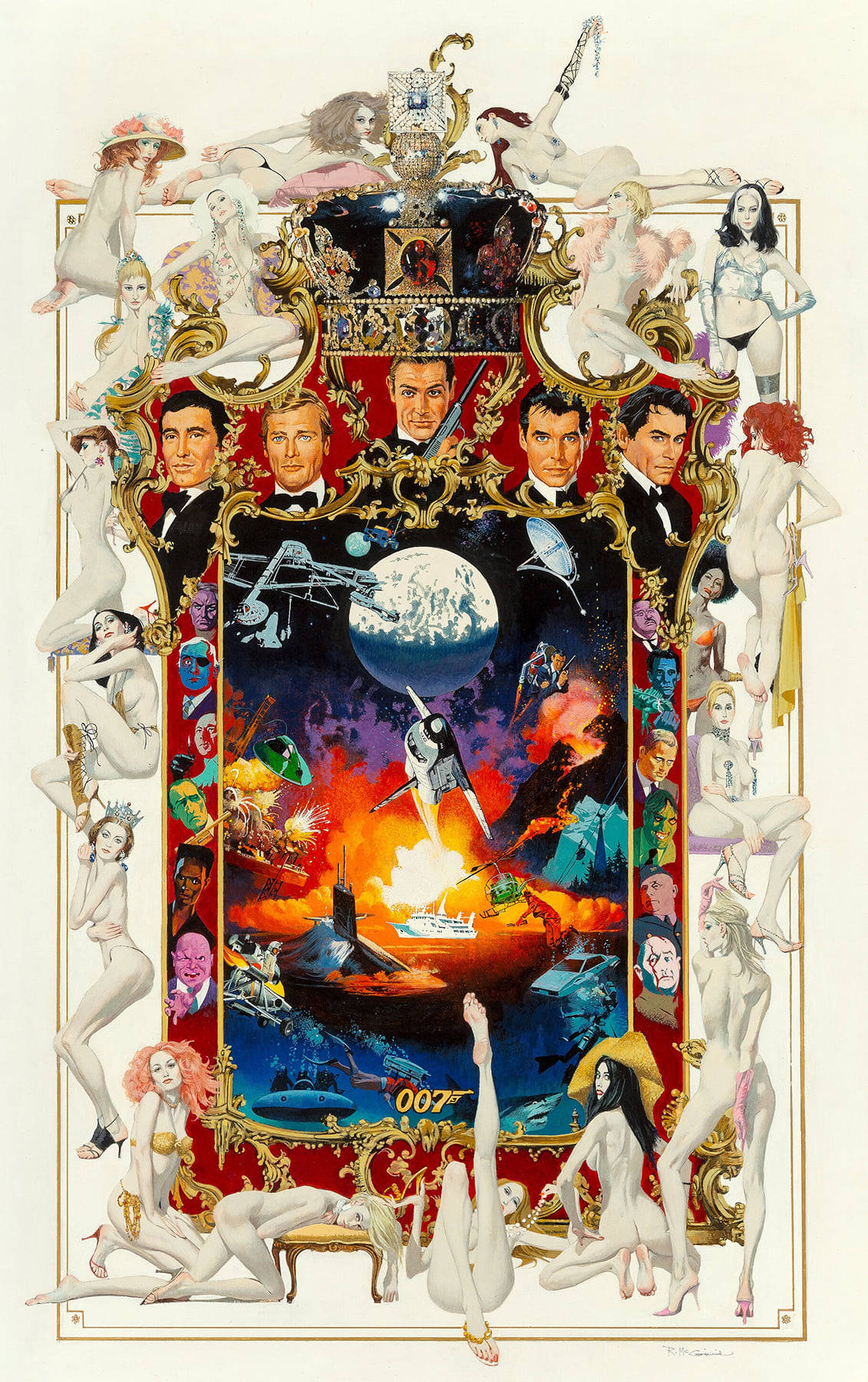 The centrepiece was always the front cover. With some behind the scenes efforts by top Bond artwork expert and collector Thomas Nixdorf (Licence to Thrill), a true Bond genius eventually agreed to design the magazine’s cover and bring some yesteryear marquee finesse to Britain’s Sunday morning papers. Artist Robert E. McGinnis had created paintings for thousands of publications, pulp fiction novels, billboards and advertising campaigns. He is also one of the best movie poster artists the form has seen. Born in 1926, McGinnis later crafted the stunning graphical overtures that were the posters for Thunderball 1965), You Only Live Twice (1967), Casino Royale (1967), the Bond and Tracy figures for On Her Majesty’s Secret Service (1969), Diamonds are Forever (1971), Live and Let Die (1973), The Man with The Golden Gun (1974) and the US teaser pieces for Moonraker (1979). His style has become the visual template for Bond promotional artwork. He was by no means the only brilliant graphical orchestrator that 007 was graced with. Yet, when it came to space, sexuality, masculinity, style, adventure, colouring and poise, McGinnis is arguably the best.

‘It’s magic to be associated with it. It’s just a wonderful fantasy – and that’s just what movies should be.’

Bedecked by a myriad of era-heavy ‘McGinnis Girls’ and their seductive limbs, the Sunday Times Magazine was a special commission that marked the end of Bond’s first century. Featuring five Bonds from Connery through to Brosnan, a cast of many and some familiar icons from Bond’s cinematic registry, the end result is a rich coat of arms tribute (and legs and more) to 007. McGinnis gives his Moneypenny, M, May Day, Blofeld, Goldfinger, a Warhol blue Largo, Scaramanga, Dr. No and Jaws intertwined with a roaring Moonraker shuttle, Blofeld’s Bathosub, the Lotus Esprit, the Moonraker space station, the From Russia with Love mountain chase and some OHMSS alpine action.

And this was just the front cover. 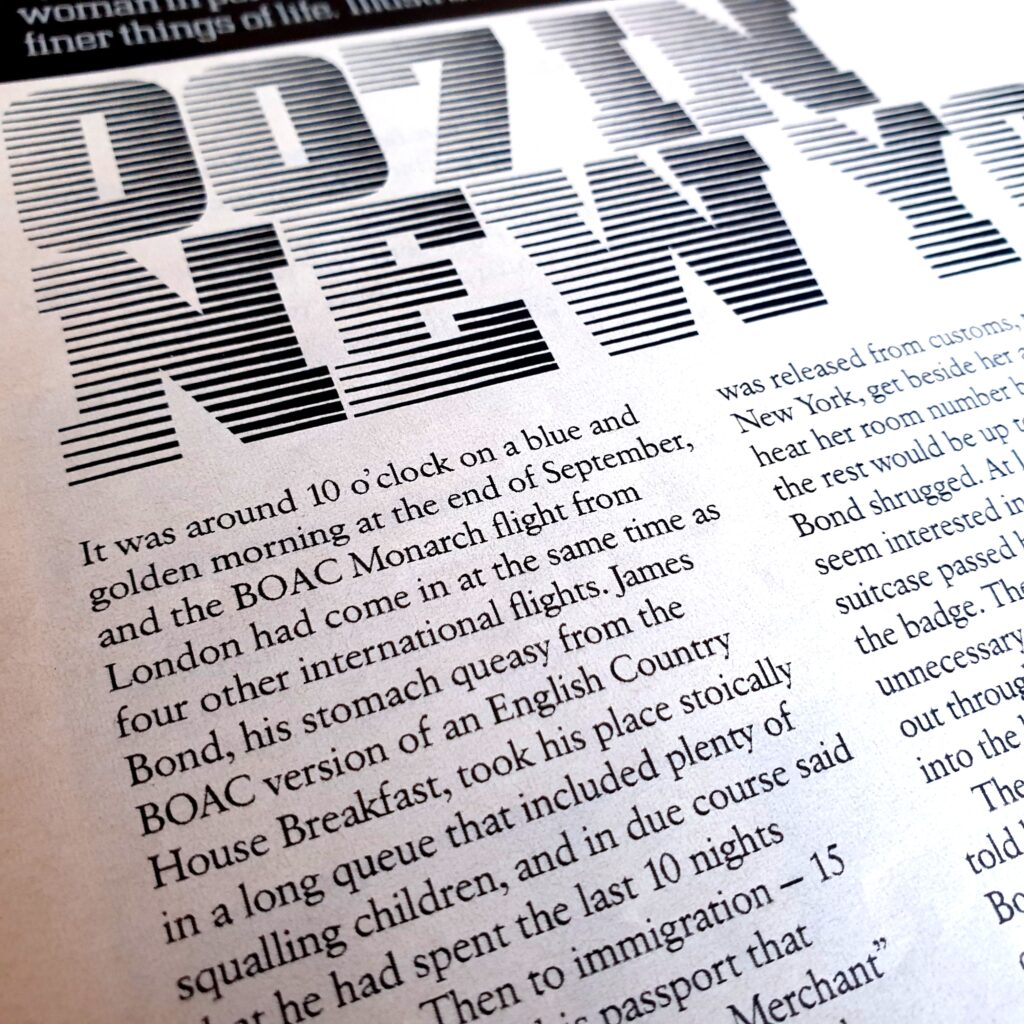 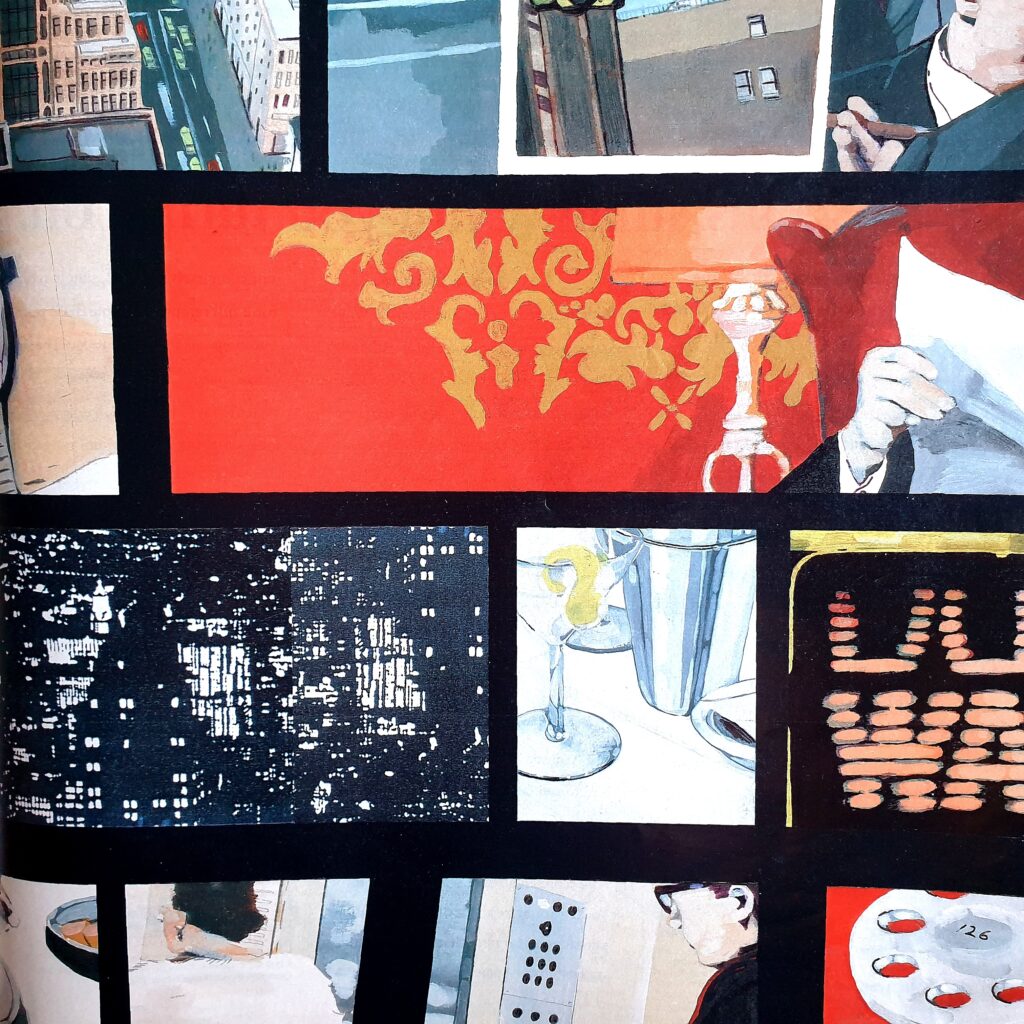 Headed up by film journalist Iain Johnstone (author, The World is Not Enough – A Companion), the rest of the Premium Bond issue is a rich salute to not only the then new film starring Pierce Brosnan in the role, but the previous decades of Bondage and Bond culture. ‘Relative Values’ saw Q’s Desmond Llewelyn being interviewed by his champagne expert son Justin (marking one of the last interviews with the actor who tragically died a month later), golden girl and actress Shirley Eaton recalls her gilded role in 1964’s Goldfinger, ‘Love and Let Die’ detailed new Bond actress Sophie Marceau in an in-depth 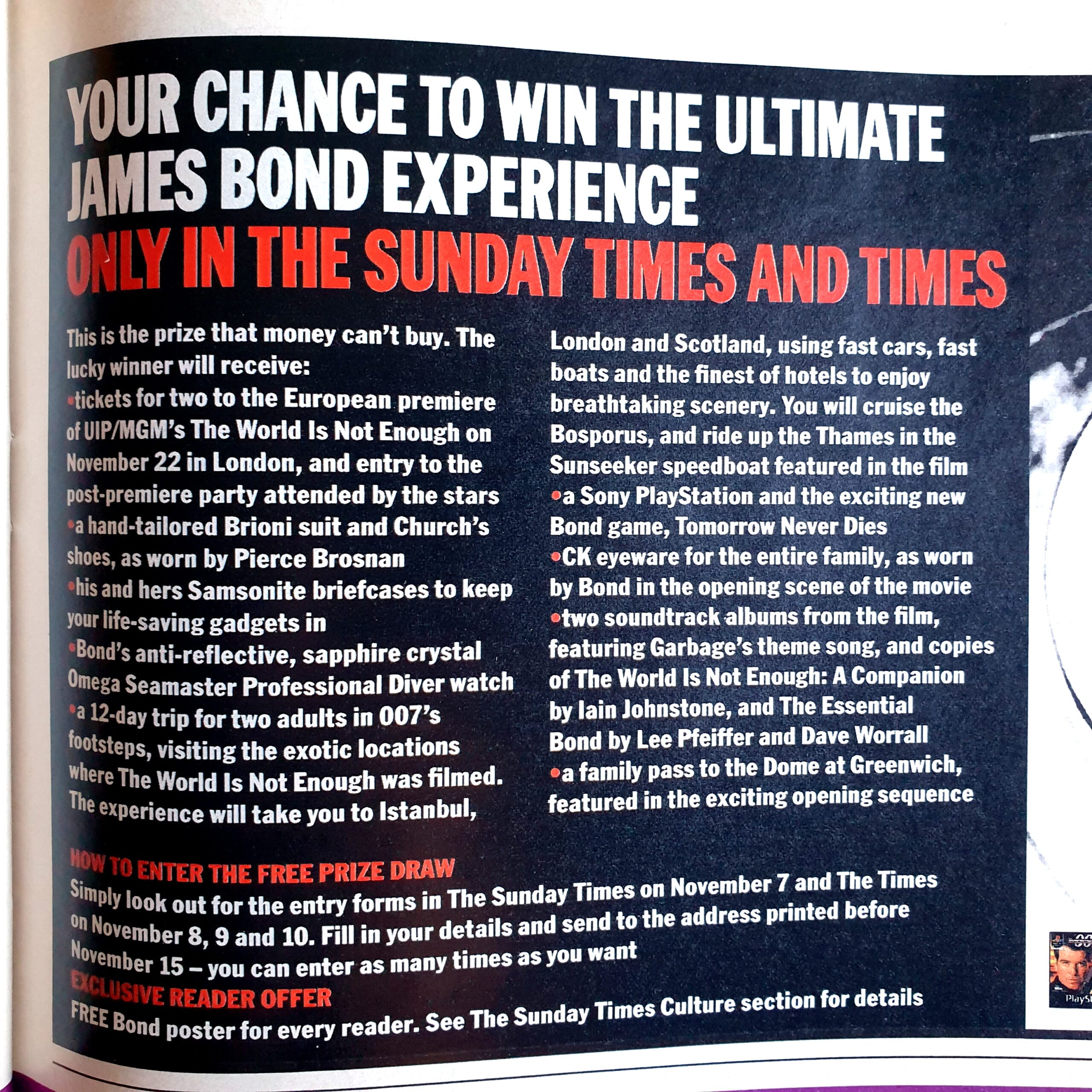 interview captured by famed portrait photographer Uli Weber, ‘Invisible Ink’ looked at the great Bond posters, ‘Dressed to Kill’ proved the early rise of Bond inspired clothing for the regular Bond fan alongside Dylan Jones’ look into Bond’s fashioning over the decades, ‘M-Cyclopedia’ was the usual run-down of villains and Bond women, ‘Rapid Spy Movement’ allowed Iain Johnstone to share some of his Bond ’99 companion writing, Bryan Appleyard looked at our enduring affair with 007 and ‘A Day in the Life of George Lazenby’ talked to the then 60-year-old Bond actor about how the role was then perceived to be ‘a total hindrance to my career’.

One final treat of this issue of The Sunday Times Magazine was a full-circle publication of Ian Fleming’s short story ‘007 in New York’, purporting to be presented here for the first time in Britain. Illustrator Lydon Hayes contributes graphical slithers of the Big Apple and a sidebar of Fleming’s ‘Scrambled Eggs’ recipe demands an accompanying pink Taittinger champagne, “individual copper dishes” and “low music”. And Fleming got to back in The Sunday Times game three plus decades after his death. 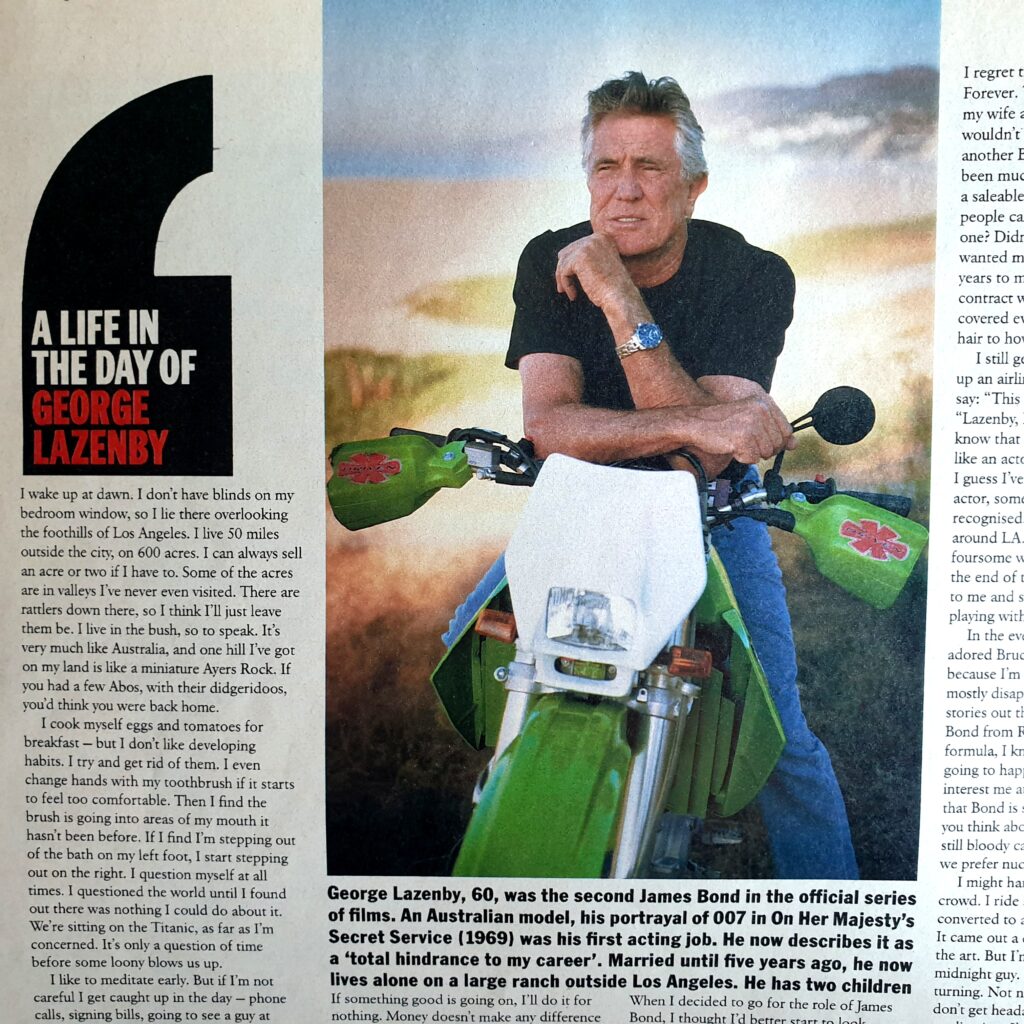 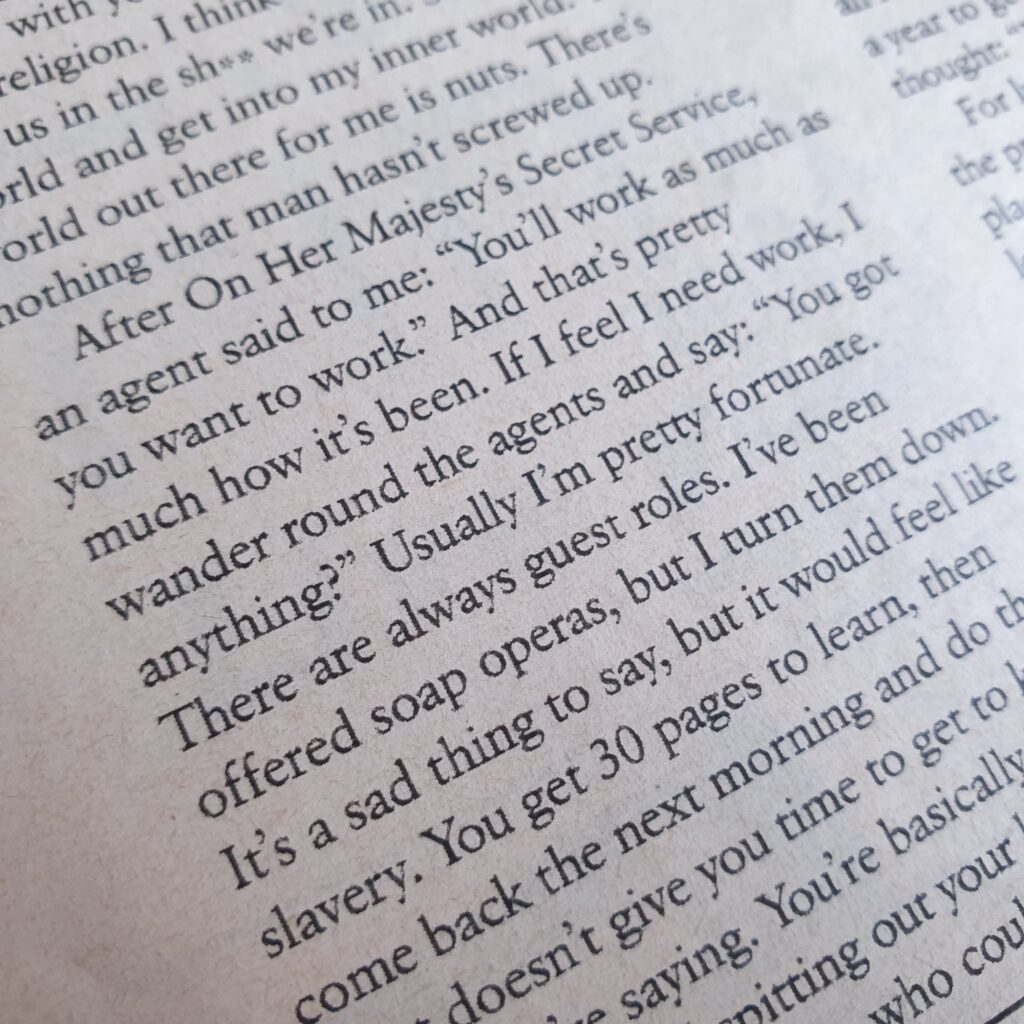 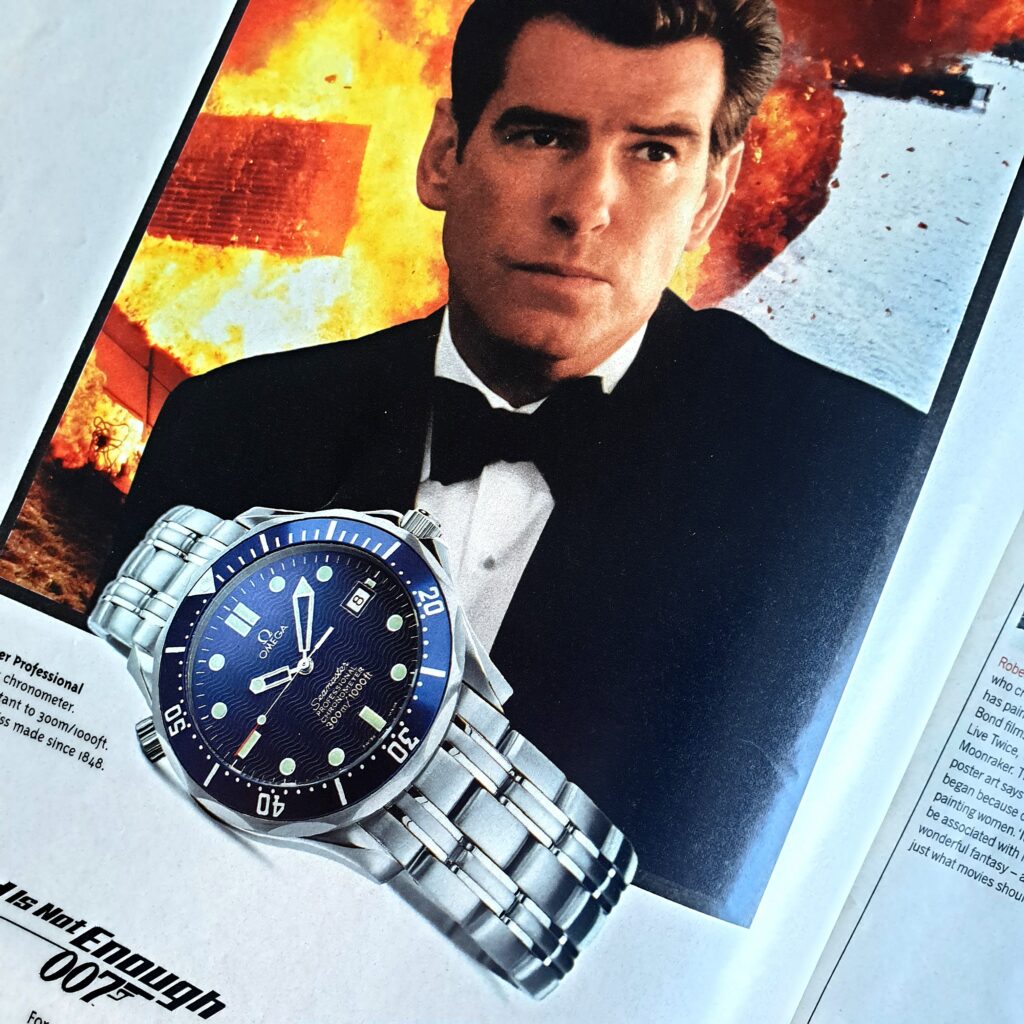 And like all publications decades later they are an even more valuable expose of their moment in time. This edition of The Sunday Times Magazine also has some gloriously dated nods to 1999 and the end of 007’s first century. An Omega ad proudly reminds of Piorce Brosnan’s timepiece in The World is Not Enough, A Bond lifestyle competition was not bad for 1999 (if you are prepared to collect the vouchers) and a new VHS boxset of Bond bullets can be collected via mail order company Britannia whilst boasting how the latest Bond film will “be available” too alongside “3 Free Videos” if you start your collection! 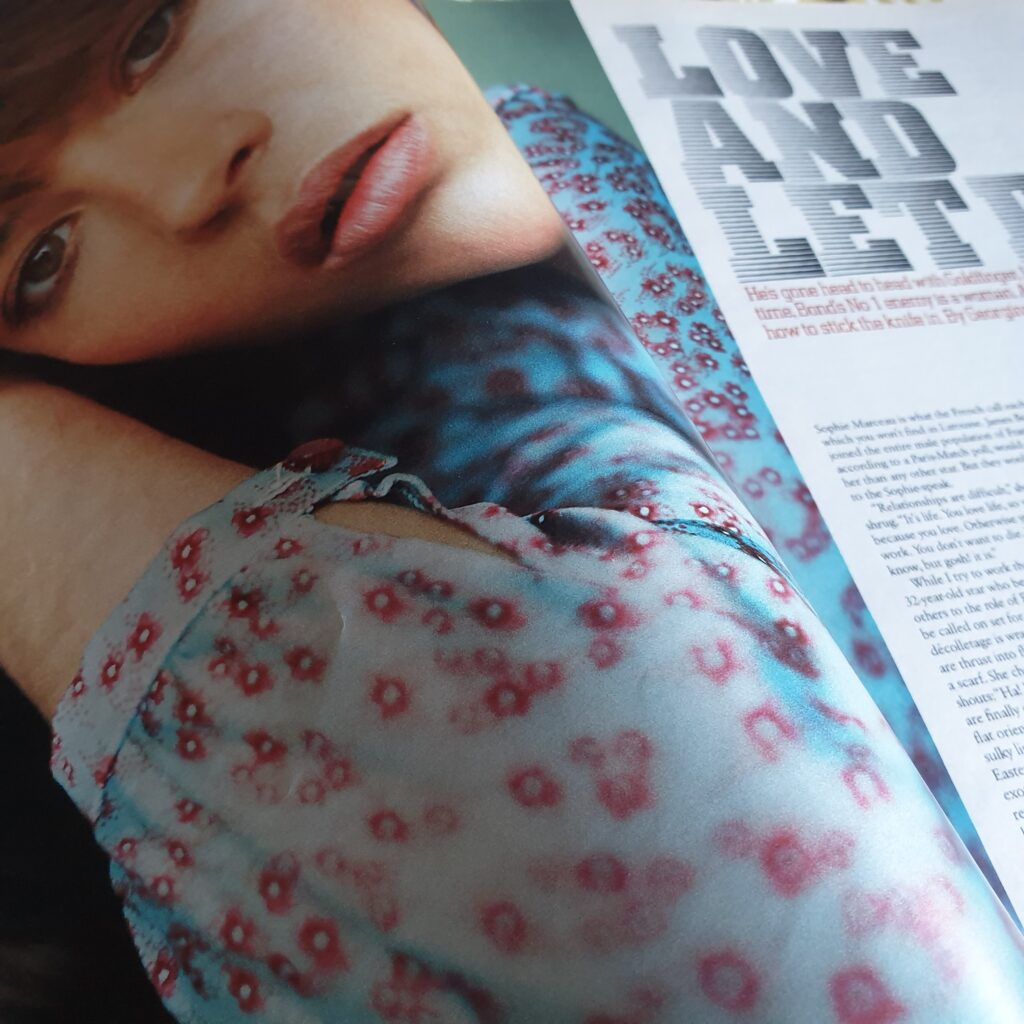 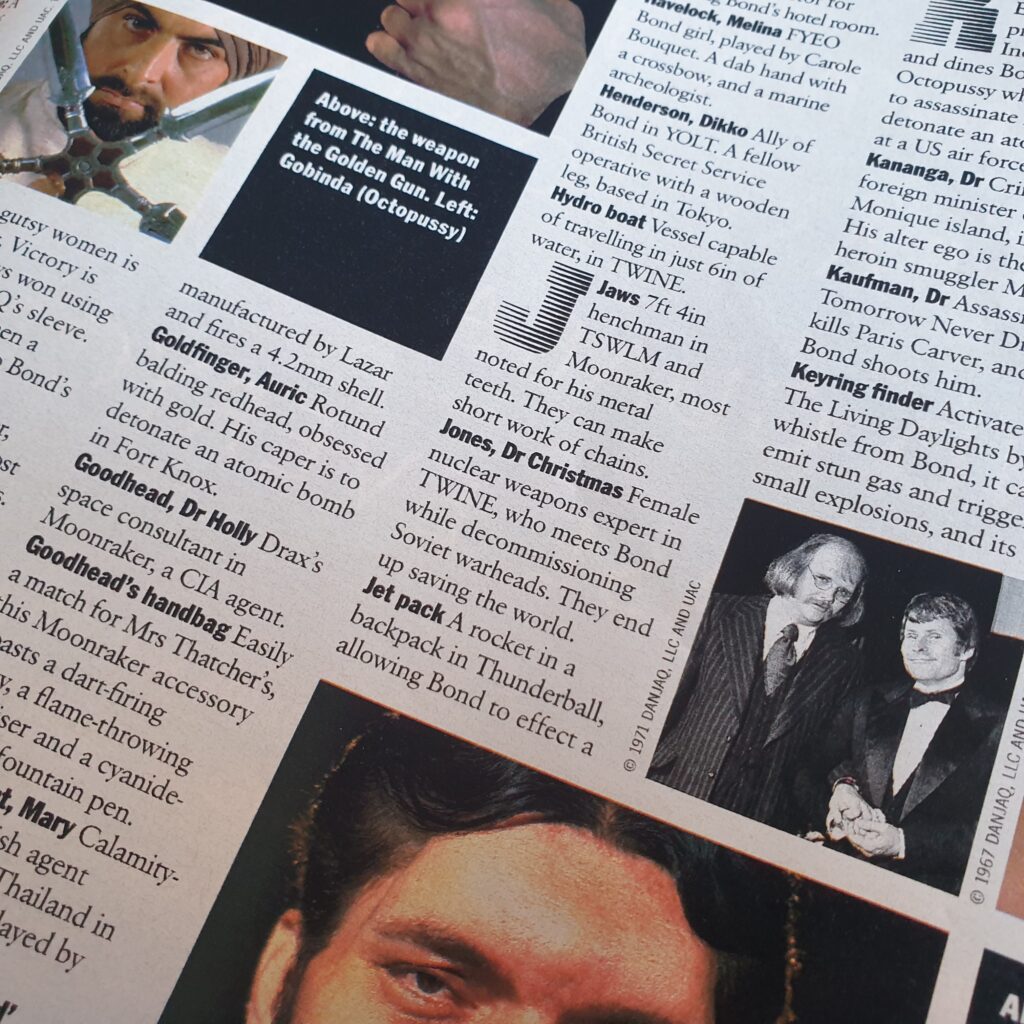 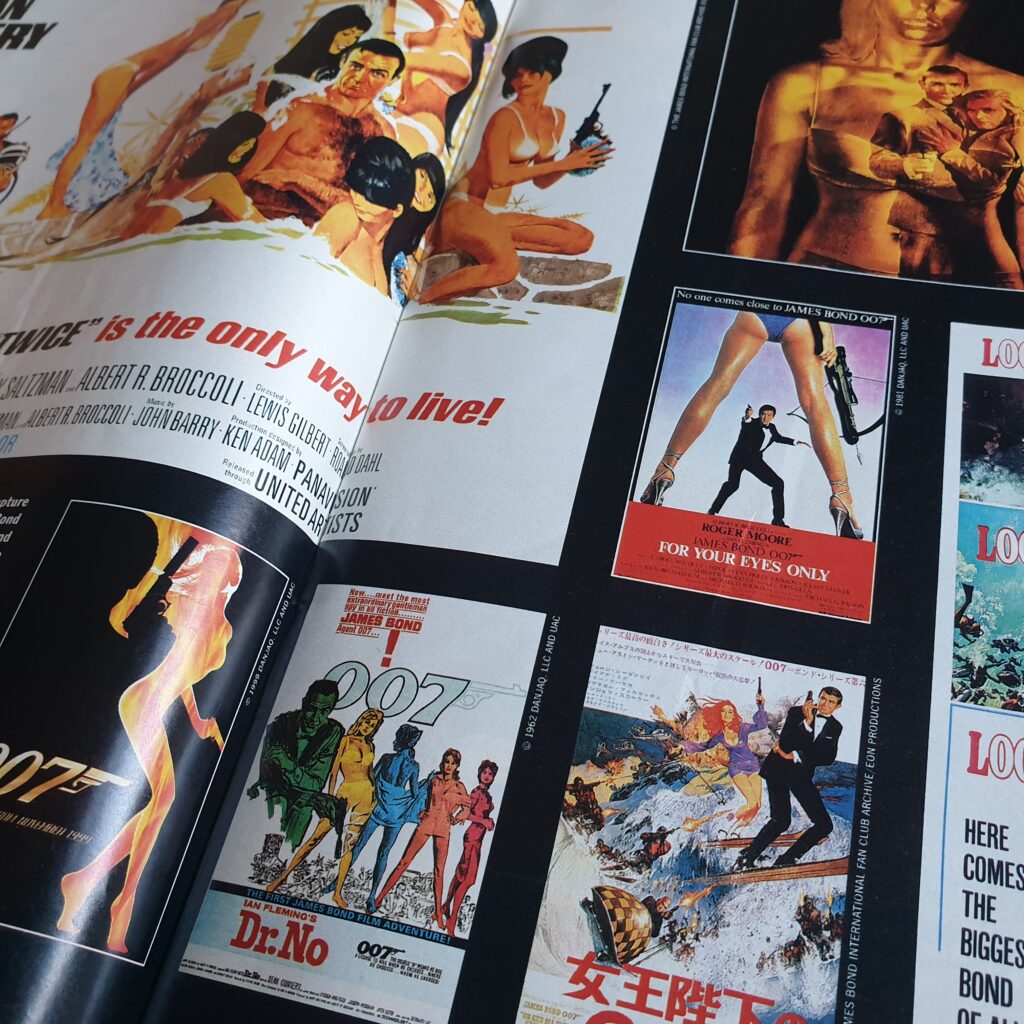 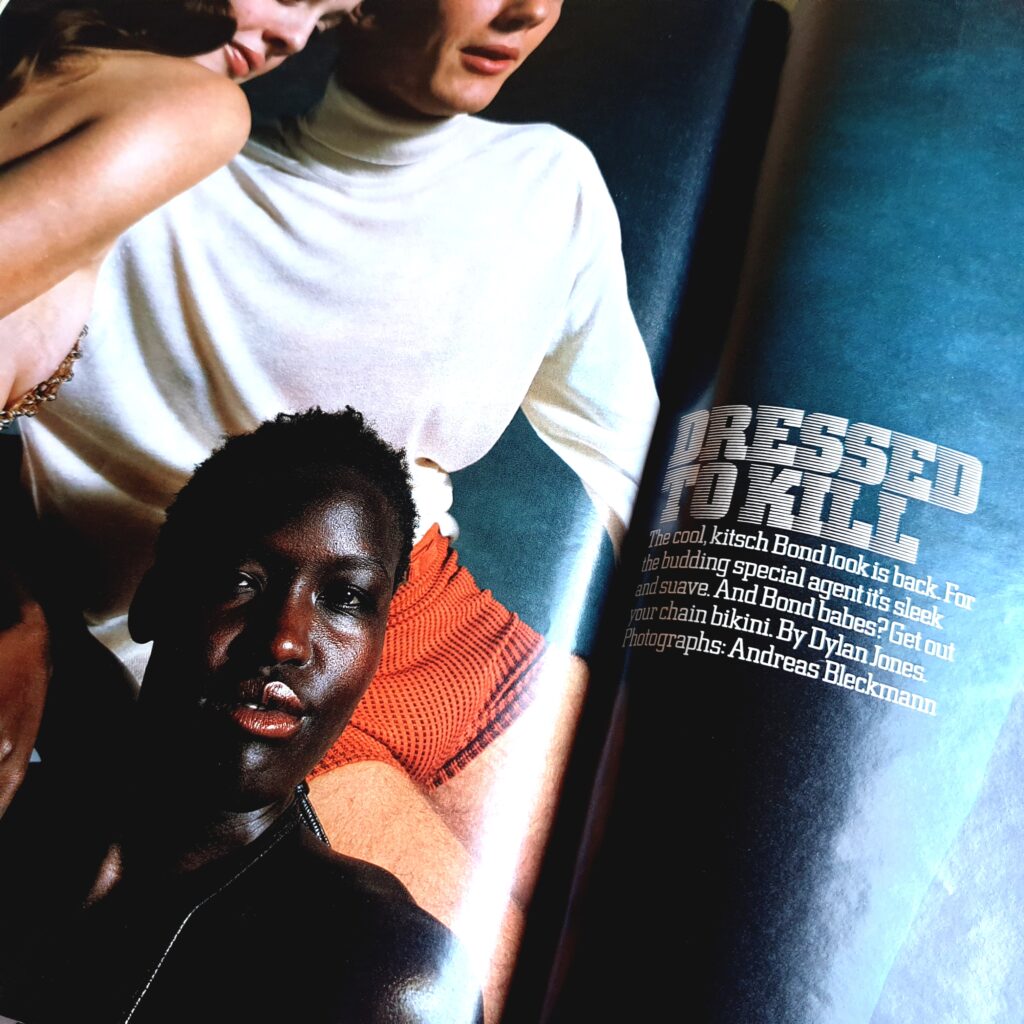 In September 2021, The Sunday Times and its Bond traditions continued as No Time to Die finally fired at the world’s movie screens after a pandemic sabbatical. And just like a younger Ian Fleming but with less Morland cigarette ash on my desk, I was tasked by the Times editors there to create the ultimate Bond quiz. I may not have been blessed with some original McGinnis Bond art as that November 1999 issue was, but it was a privilege to tread the newspaper paths of Fleming, his Times’ pal Godfrey Smith and a rich association of Bond reportage adding some 007 shaped adventure and style to a Sunday breakfast.

NO TIMES TO DIE as this bullet catcher creates a fiendish SUNDAY TIMES quiz to topple the world’s Bond knowledge. 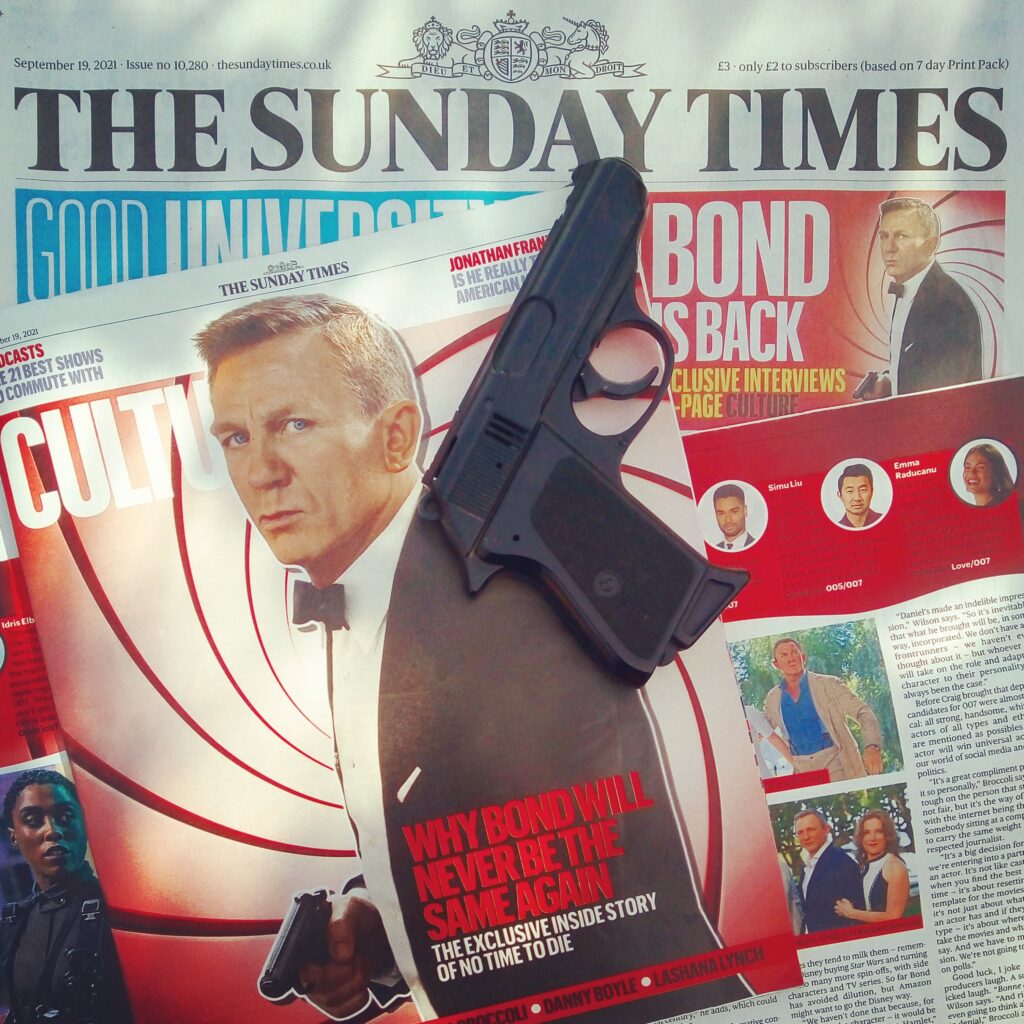 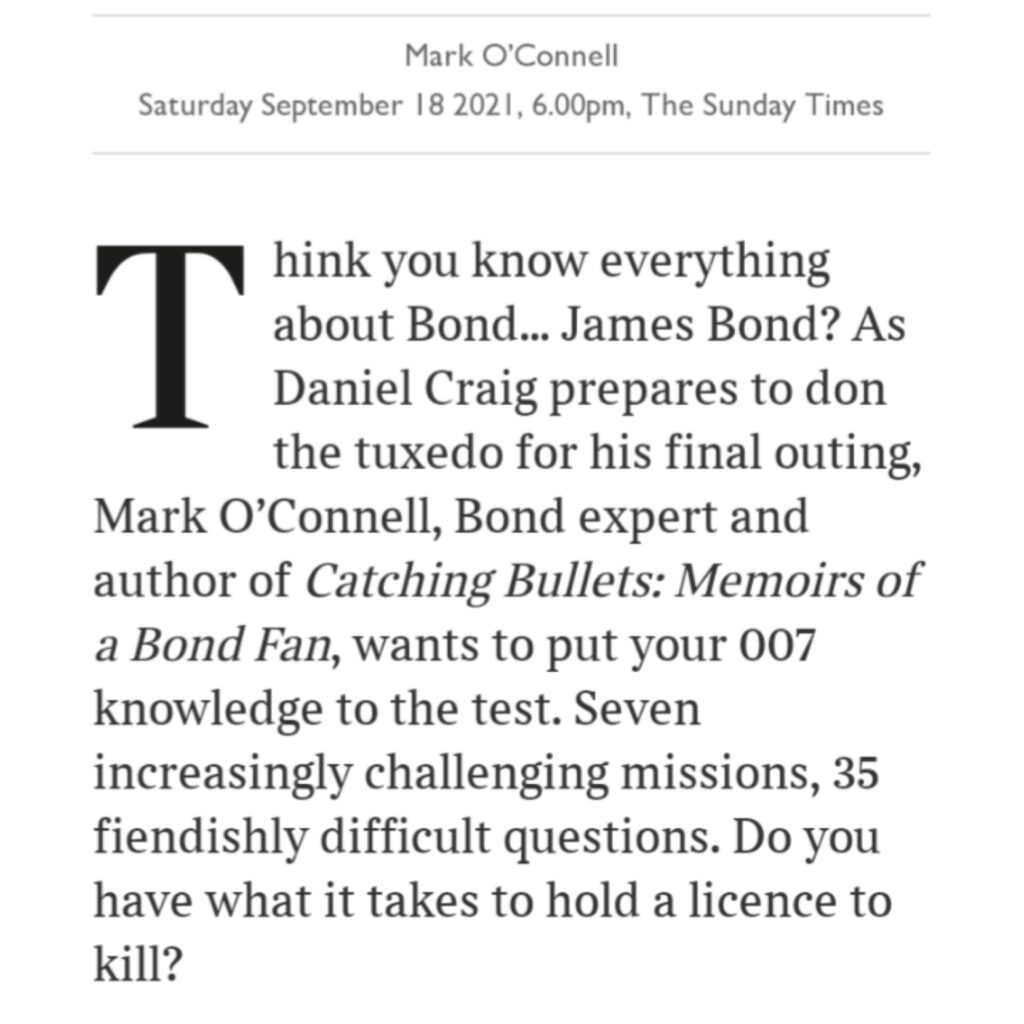 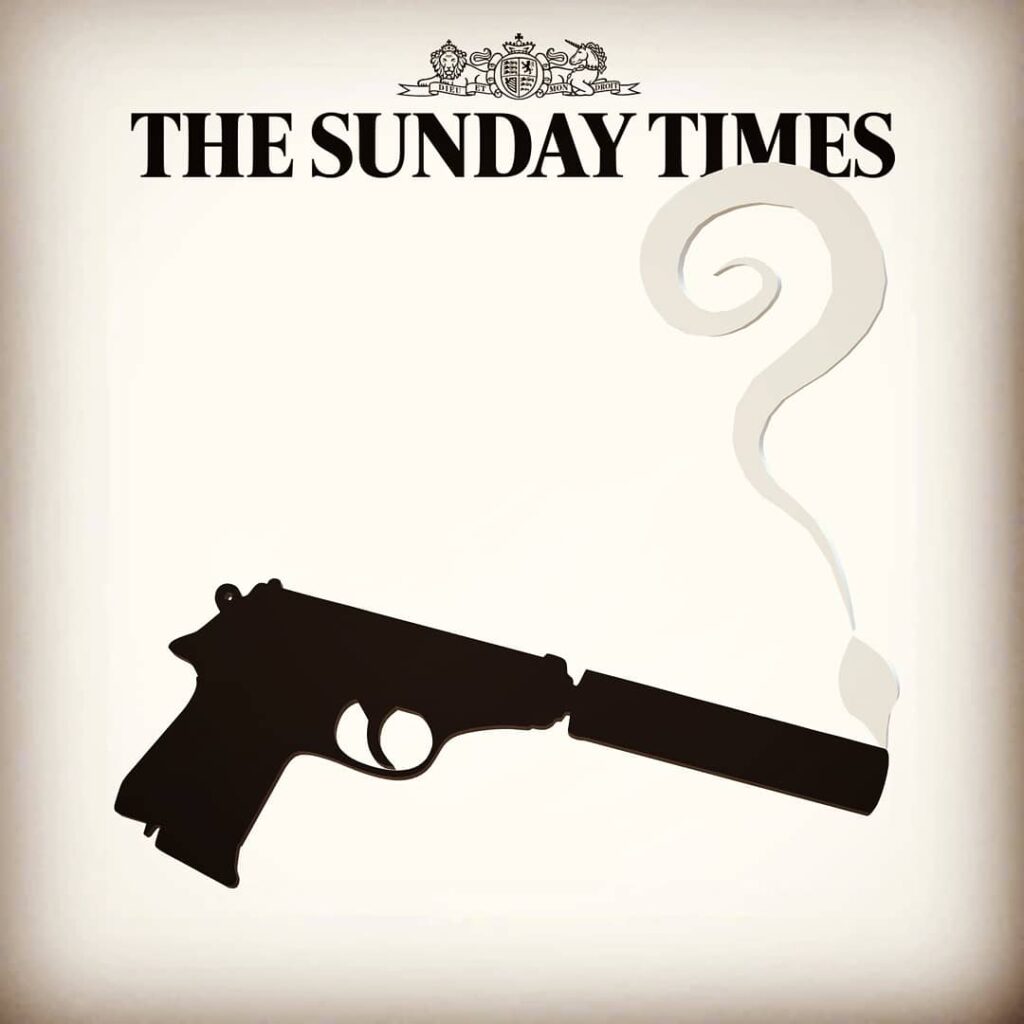