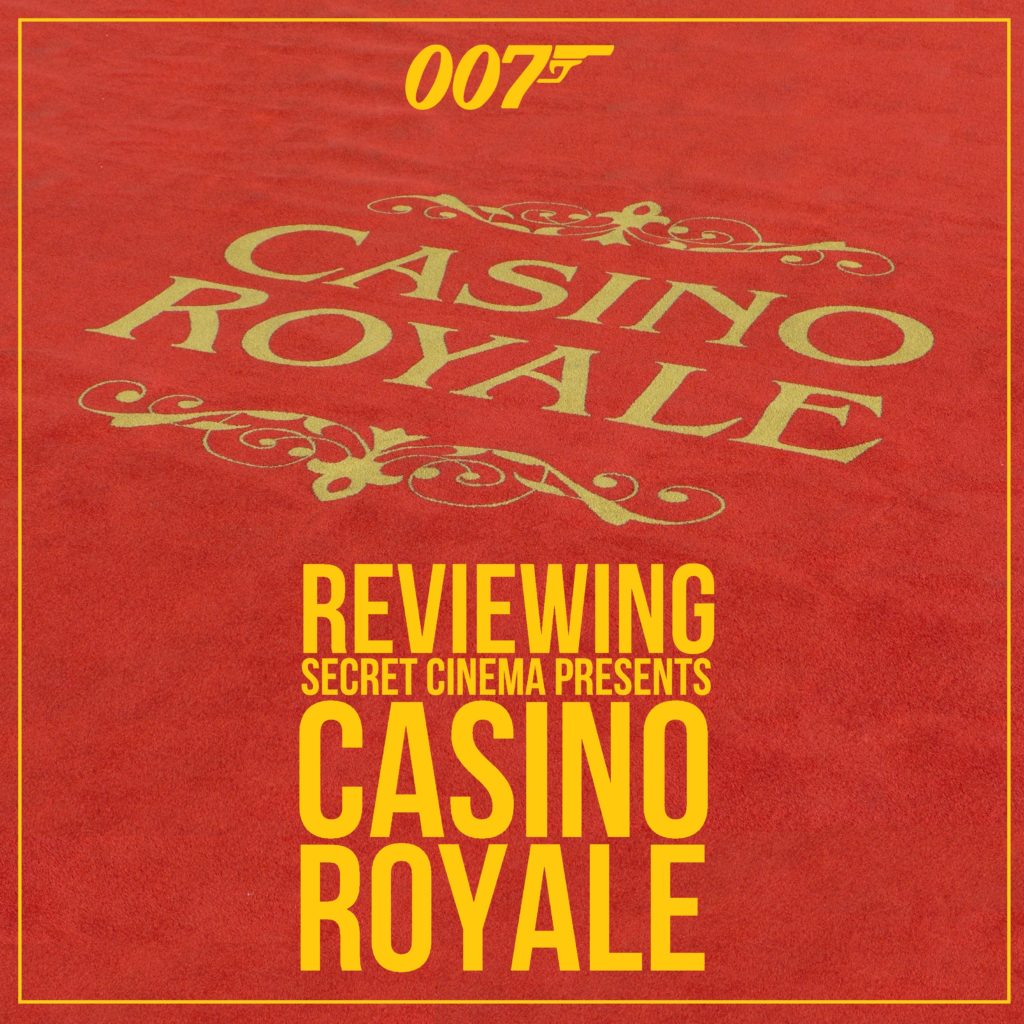 ‘You asked for the introduction. That’s all my organization is willing to guarantee.’
Casino Royale / 2006

In a movie world where how we consume and experience our films is ever changing away from a multiplex screen in an out-of-town car-park, Secret Cinema has been at the forefront of a 21st Century approach to movie immersion. As physical and live reworkings of classic movies new and old almost takes cinema back to its carnival and theatrical roots across the globe, it is Secret Cinema leading the charge. People in London still talk about the Romeo + Juliet event. Back to the Future made global headlines. And its next experience Stranger Things is selling out fast. Initiated by Fabien Riggall in 2007 as the boom for physical creativity, live performance spaces and vibrant – sometimes provocative – cabaret has flourished, Secret Cinema has taken the world of immersive cinema and immersive art by storm. 360-degree, 100% participatory and curtain free performances are the mantra of their secret movie-scapes. What started out as small, five-day-long engagements are now serious fixtures in the London calendar stretching across five months. In a world where access to everything – our news, our stories, our films – is instant and often lacking grace, Secret Cinema wants to remind of the physical fluidity of cinema, how we have always been part of it (even sitting in a darkened theatre), how art needs to reach as much as be made in the first place, and how cinema gets into our very souls. Step forward Daniel Craig, his debut 007 opus and Secret Cinema‘s biggest production yet, Casino Royale. 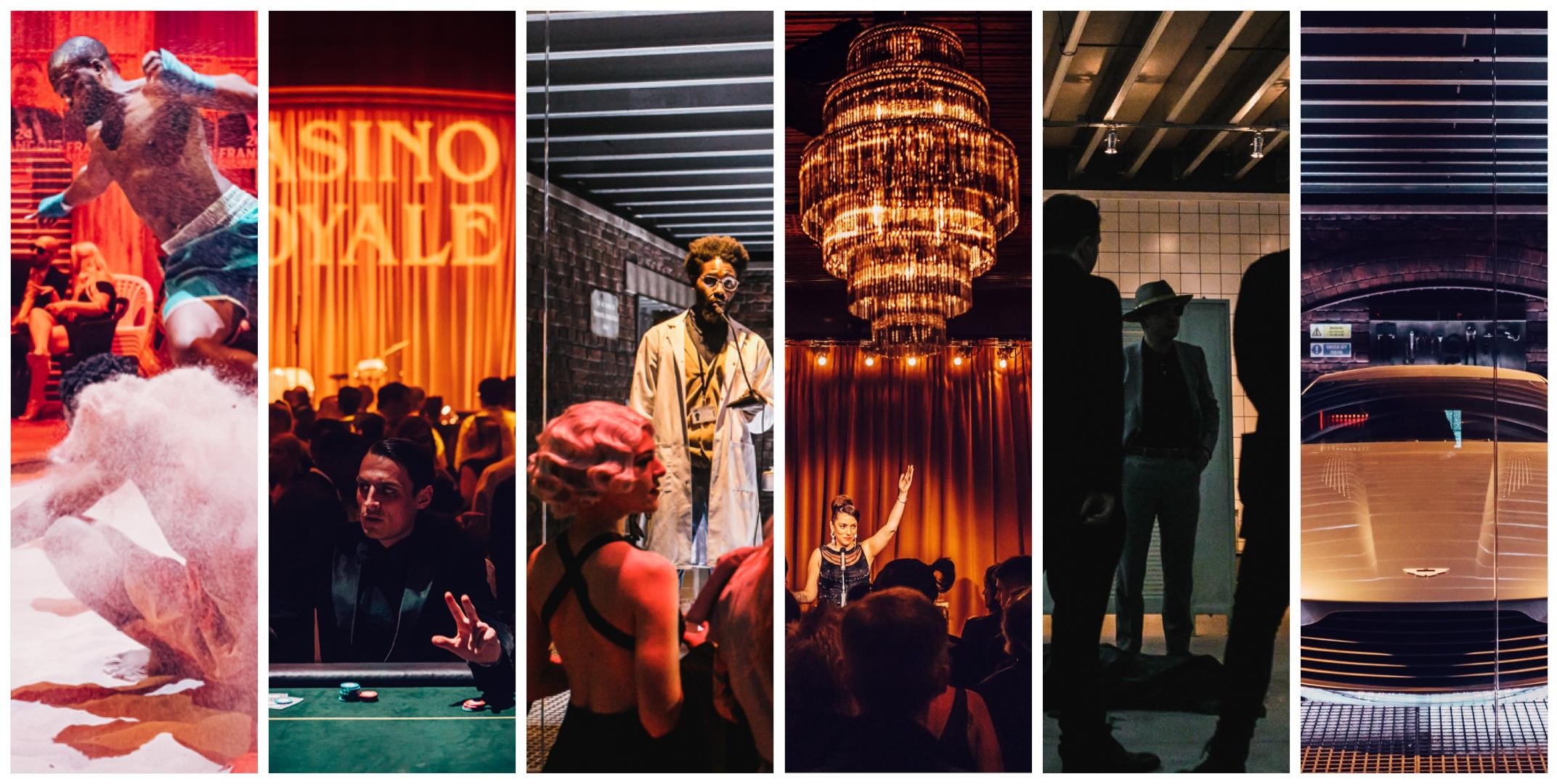 Working in close tandem with Bond team EON Productions, producers Barbara Broccoli, Michael G. Wilson and their London archive, Secret Cinema‘s Creative Director Angus Jackson, Group Creative Producer Kevin Fitzmaurice and Associate Creative Director Tom Maller have finally opened the green baize doors on Casino Royale – and the ensuing card-game of cinema is rather special. As part of the secrecy of Secret Cinema is – yep – secret, there are zero spoilers here. Only those who sign up for tickets will receive details of location, dates, timings and the espionage-minded groundwork required of all guests. But, in keeping with Bond’s home town, this bullet catcher can say the event is in London. There is definitely a theme of international spies, Bond world aspiration and triple-agent subterfuge. The effort required of your look is mandatory (as in proper, proper effort). And you will be most definitely be sashayed into an ever-changing tribute to Martin Campbell’s Casino Royale as ‘Operation Wildcard’ scoops you up, races past you, grabs you, trails you, challenges you and plays with you. 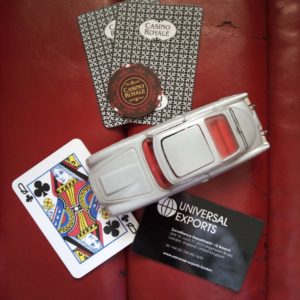 Whilst famed 007 production designer Sir Ken Adam had no direct involvement in the 2006 Casino Royale – his mod-pop sense of theatre, contrasting materials and operatic size is all over what Jackson, Fitzmaurice and Maller have achieved here. To be as fully immersive as touted, the production design of this experience is a triumph. This is definitely the onscreen world of Casino Royale – marked out with a level of detail that is one of the defining tics of Fabien Riggall’s whole Secret Cinema project. The story beats, characters, set-pieces, colours and sounds of the 2006 bullet are all naturally honoured. There is a movie production dedication to detail here – one that echoes EON Production’s own working mantras of designer precision, quality materials, physical craftsmanship and a slightly magnified sense of escapism. It is as near as you will get to floating around The 007 Stage at Pinewood Studios when Bond 25 is in full production swing. You soon reach a point where you are no longer sure what is a rest room and what is a movie rest room. You start second guessing stairwells and the blurring of the fantasy and reality is most curious. I hope it is no spoiler, but this bullet catcher was quietly beguiled by the casting of non-local pasta bags that dressed one particular room. Although the highlight was easily the elaborate and sometimes jaw-dropping attention to detail that pays tribute to one of the action locations of the film. Its smaller design tics are endlessly rewarding – as are the acoustics and sound worlds surrounding, steering and informing your night. The whole aural ambience is almost one of a night in an industrial clubland – with real decisions and commissions made regarding the musical timbre of the experience. It is Berghain for Bond fans. But, unlike Berlin’s notoriously snobby cathedral to ex-power plant techno, Secret Cinema Presents Casino Royale does actually let you in both narratively and literally. Even if both (and this bullet catcher has been let into Berghain) share a certain sense of industrial club sounds that are less Bond ’06 and more Carver Global News Network media party circa Tomorrow Never Dies. 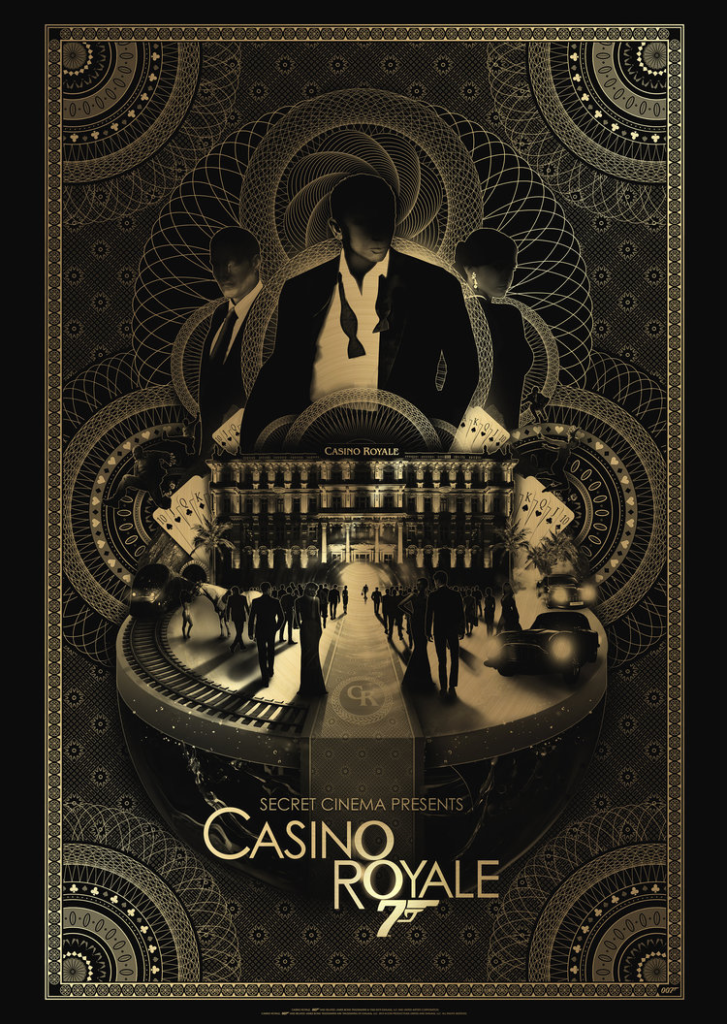 Creative Director Angus Jackson and his design acumen has certainly opened out and enlarged the physical palette of a film that is actually quite contained. As a movie, it starts out with two big action scenes that would have ended previous 007 films. Yet, as the internal world of Bond is dealt a bad deck of cards, the drama and physicality of the film shrinks and the world of the film becomes more introspective, more contained. And as the film contains a contrast of local Bahamian colour alongside European story worlds, so too does this project. Not all locales and set-pieces are gargantuan. The physicality of the event does have breathing space and as many parts of it fit just twelve as others just house twelve hundred. Zones, places of interest and split levels enable guests to see previous elements from totally different angles and heights. And whilst it is very easy to lose your fellow agents with the deliberately splintered narrative at play and some bottle-necks do invariably build as the 1500 capacity spreads into 007’s grotto of intrigue, the whole affair never feels overcrowded. With a cast and crew of over 400 people, Casino Royale has multiple pathways, multiple encounters, multiple double-takes and multiple outcomes. A benefit of that is you can take this event however you please. This isn’t about annoying am-dram students badgering you all night (but be careful and trust me on this – if you get your look too right you could get endlessly visited by other random guests believing they need to know you). The creative agents behind this vivid new spin of the Casino Royale dice have clearly tackled the casting with the thinking of any west-end production. Its sense of youthful vibrancy and contemporary spectacle is one of the wins here – especially as the savvy casting demands instant and endless improv for hours on end. Various rounds of auditions and run-throughs determined the players. Some might look familiar, others less so. Yet, all of them competently – sometimes effortlessly and without fanfare – expand the story world of this production. The passer-by and your double-take of familiarity is one of the fun tricks of the night.

Remember Diana Rigg and her stair-descending entrance in 1969’s On Her Majesty’s Secret Service, Famke Jansen’s gaming-table killer looks from 1995’s GoldenEye, or Carey Lowell, Diane Lee-Hsu and Talisa Soto sauntering into midnight view in 1989’s Licence to Kill? One of the key tropes of 007 onscreen is Bond Arriving. Secret Cinema has granted its guests that cool licence to arrive, to make an entrance, to saunter with glamorous intent into a casino and eyeball the card-flicking opposition with venom. The whole experience has been nurtured by creatives who know how Eva Green’s Vesper Lynd saunters into the Salon Privé is as memorable as any action set-piece. How her death haunts the film creates here a sort of brooding melancholy that only the devices and freedoms of theatre can spotlight and exploit. How the night honours Bond getting his tux and Vesper her gown is a lovely beat only theatre can do. And some of Bond’s real co-stars from the actual film are present in a way no regular screening down your dirty multiplex could allow. The production’s sense of poise and posturing is easily one of its greatest achievements. This is not office-party Bond – something Fitzmaurice and Maller explain to me they worked hard to avoid. This is not the time for soft toy white cats and Austin Powers suit rentals. There is no constant loop of Bond music or derivative title silhouettes. Tuxedos and ballgowns are of course punctuating a lot of wardrobe choices. Yet, part of the joy of this piece is witnessing the real alternative thinking, accessory quirks and hipster panache that has gone into your fellow players’ looks. This is a world of subtly-placed Bond elements framed by a Generation Y zeal.

Further top marks must also go to the thought behind the wining and dining. There is no stupidly priced festival catering in wrongly-sized plastic cups and endless queues. Top brand names are not just logos on posters. They have curated, designed and staffed the perfectly sited bars that star in this production. You will be able to order whatever you desire, however you like it stirred. Or shaken.

Heed the advice of your arrival time as the whole journey and its many parts demand time to fully witness. If anything, the experience is almost too richly populated for the time you’ll have.  Like Bond’s final win at the baize, the end result is an embarrassment of riches – with the layers of design and engagement almost insane at times. Yet, not one night will ever be the same. You spend half your visit finding out what you didn’t notice or engage with as fellow guests eagerly report back, and the whole night becomes one of your stories and observations too. And as you pass through the story worlds of this film, it is very clear that all of us are part of the production, its scale and creative intent. 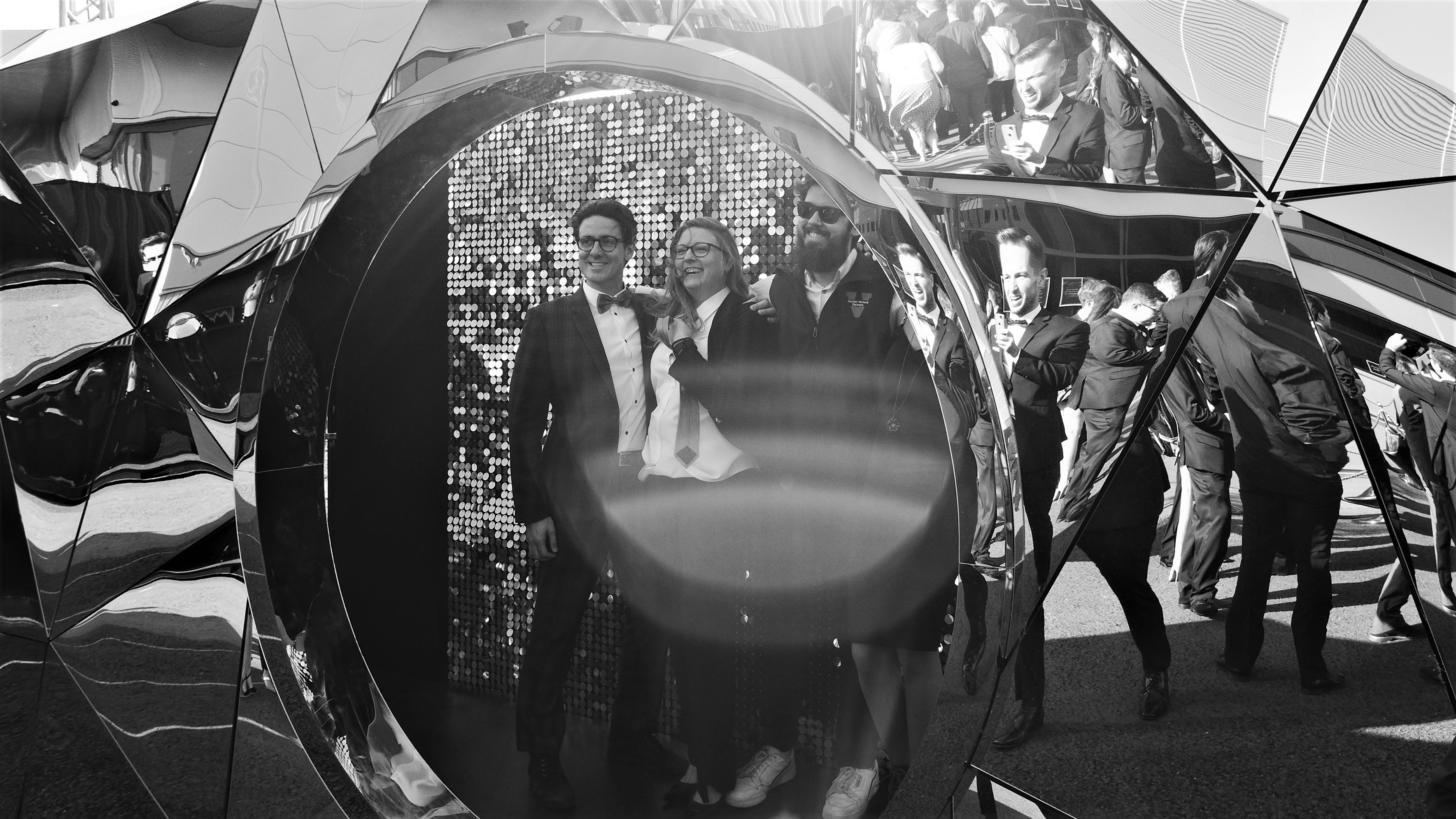 And then the cue that the film is about to start fills the whole environment leaving all guests with that shared panic that none of us are ready yet. You forget the film will actually be screened as a real card trick of space unveils where the 1500 guests will be experiencing Daniel Craig’s debut. And then a whole new project of design, theatre, interaction and thinking kicks in as the film hits the ground running and a new Bond is born. This presentation of Casino Royale is about rolling the dice on a whole franchise, repurposing the drama and beats of Craig’s 2006 debut and finding the contemporary tone of Bond. When the pre-title 007 lifts himself up from that toilet floor and ‘ALBERT R. BROCCOLI’S EON PRODUCTIONS’ caption blasts across the somewhat sizeable screen, it was instantly clear to this bullet catcher just why Secret Cinema chose Casino Royale (and they seriously pondered many a Bond film first). Casino Royale is not just a triumphant re-pointing of the Bond franchise with a new leading man. It has become a key notch on the bedpost of pop-culture cinema, a new bit of action movie grammar and a 007 icon. Secret Cinema presents Casino Royale is a triumphant achievement of atmosphere. It is about story-scapes, movie-scapes and sound-scapes – a sort of atmos-aganza celebrating how one film is not just a popular benchmark to Bond fans, Bond and EON, but cinema itself.

Secret Cinema presents CASINO ROYALE continues until October 5 2019. For all details about tickets and booking. 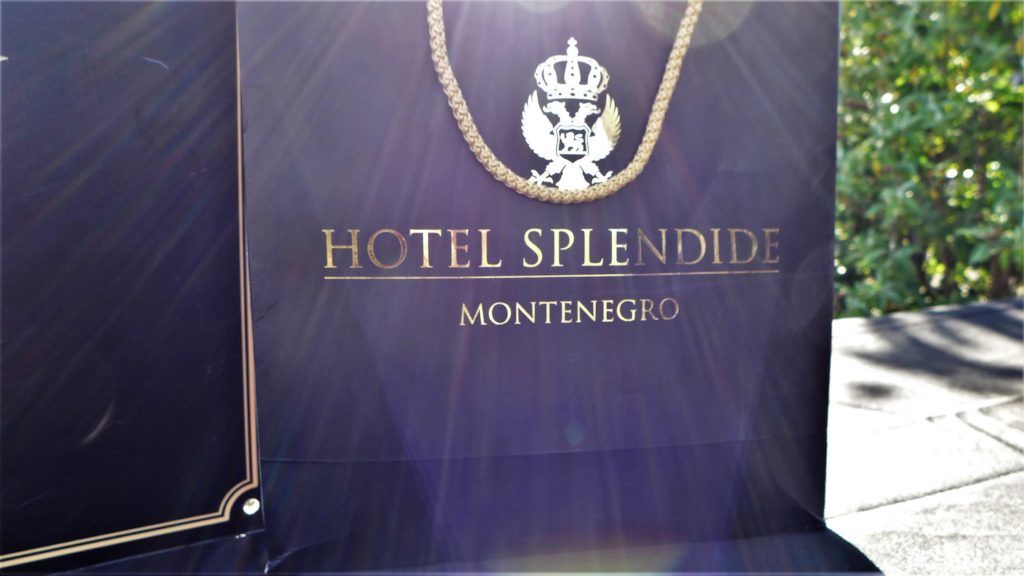 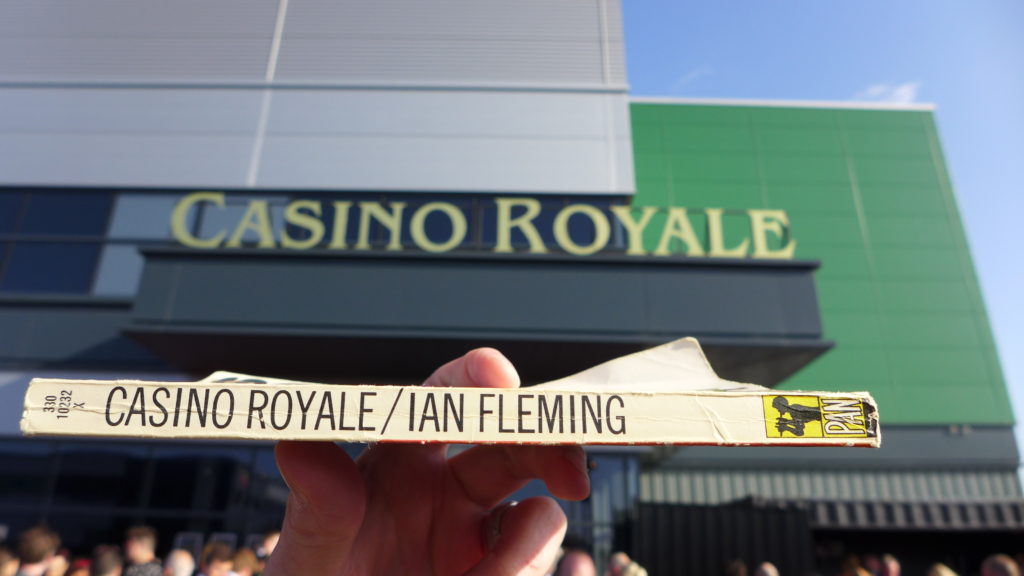 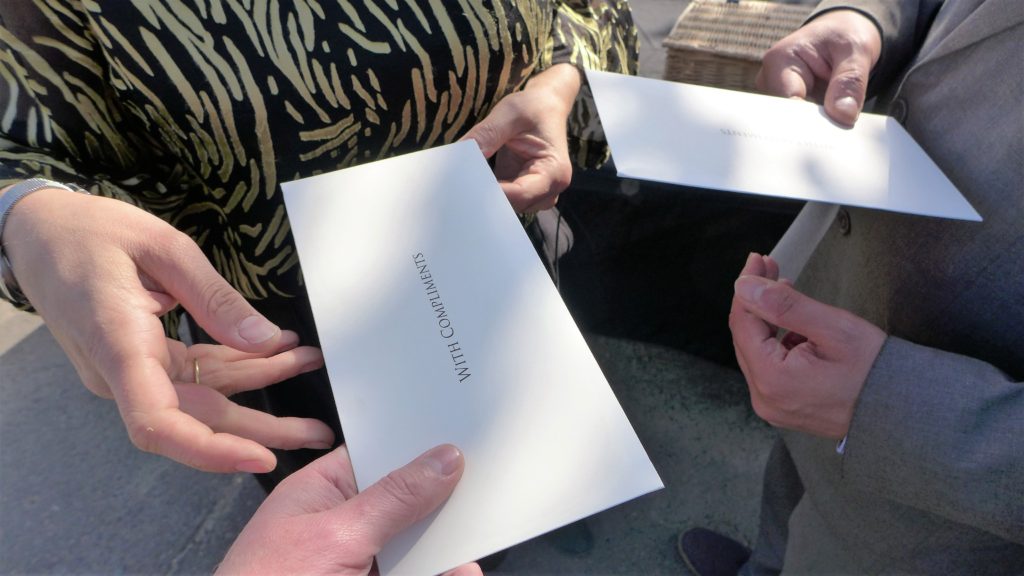 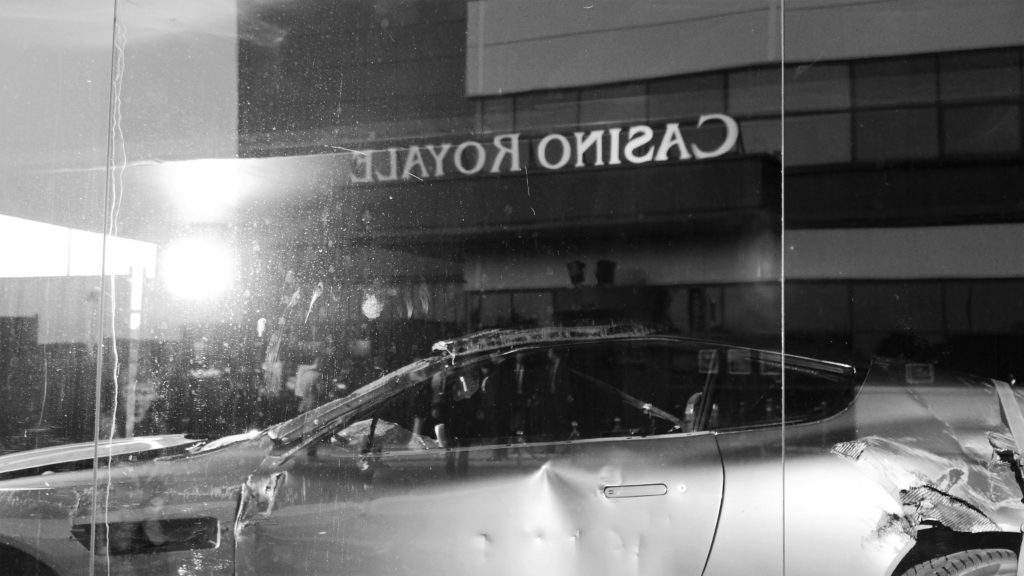 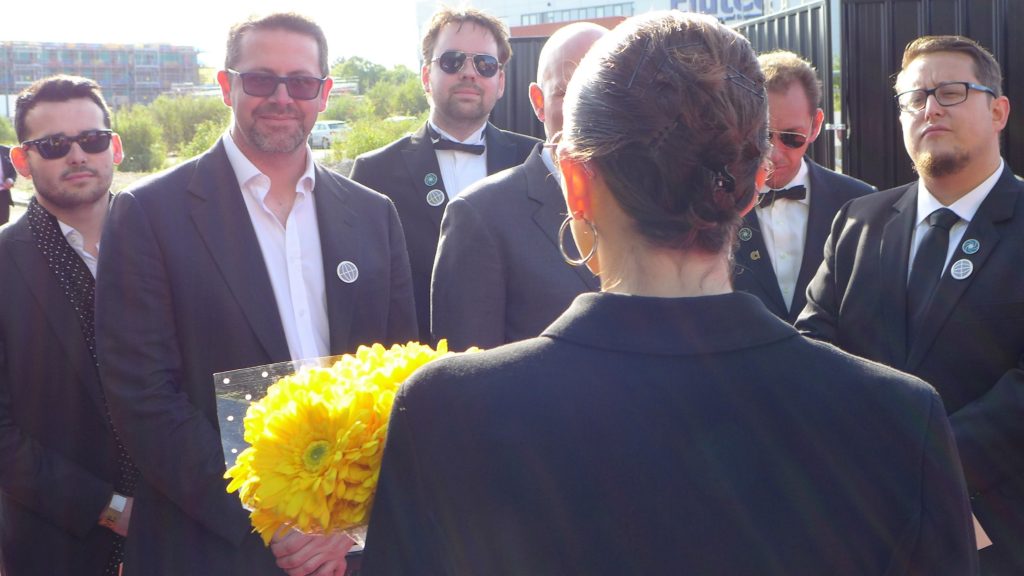 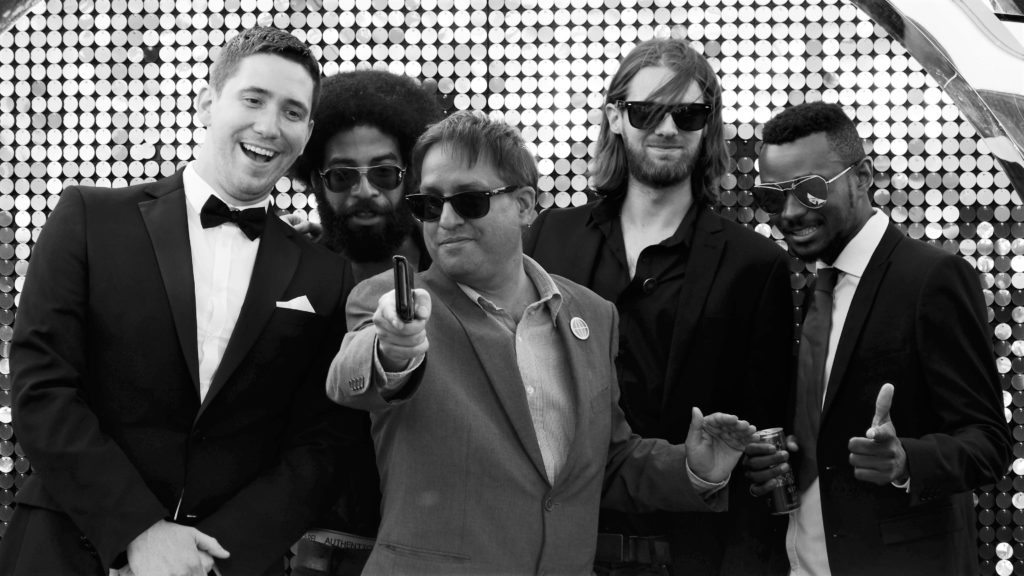 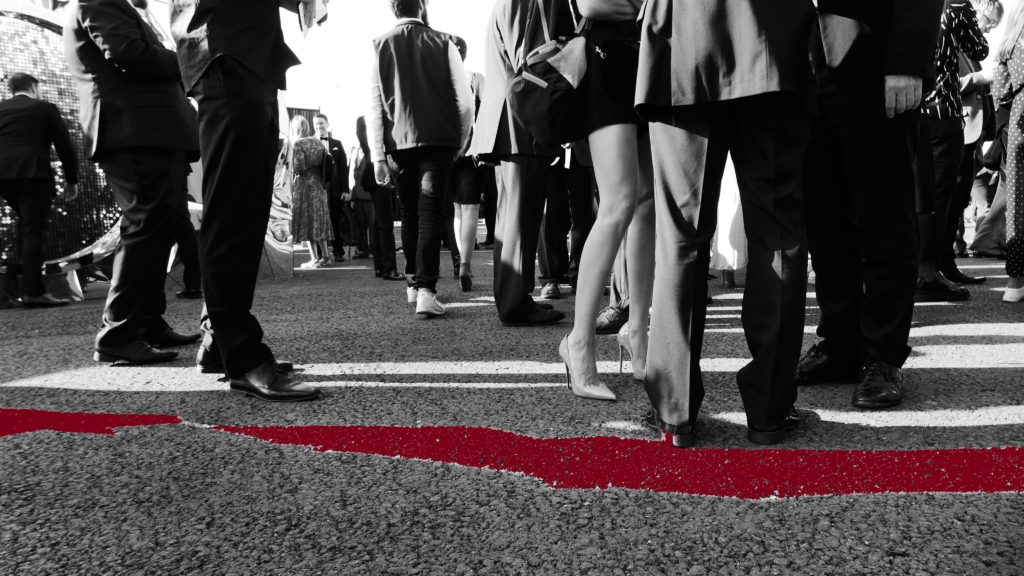 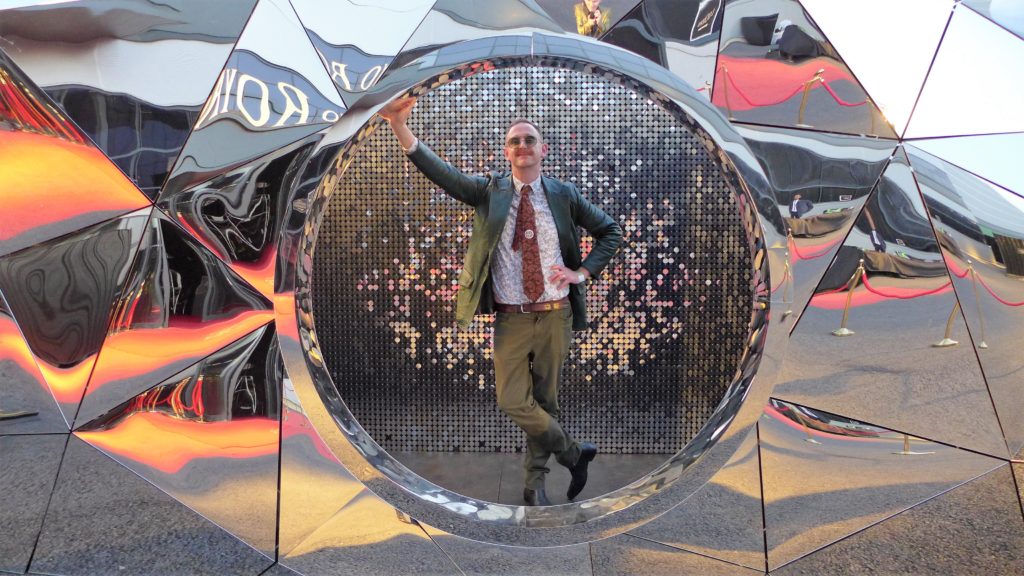 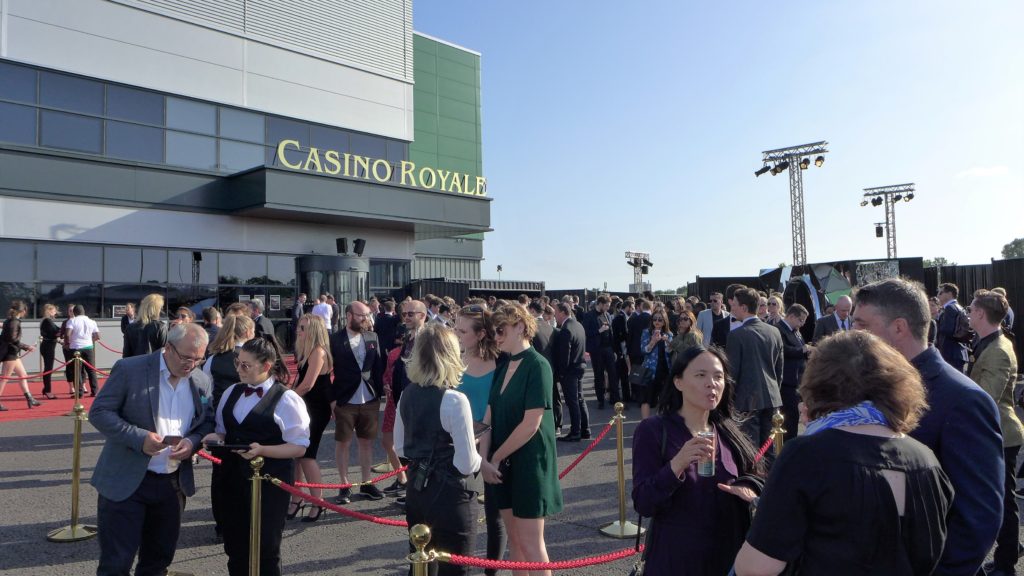 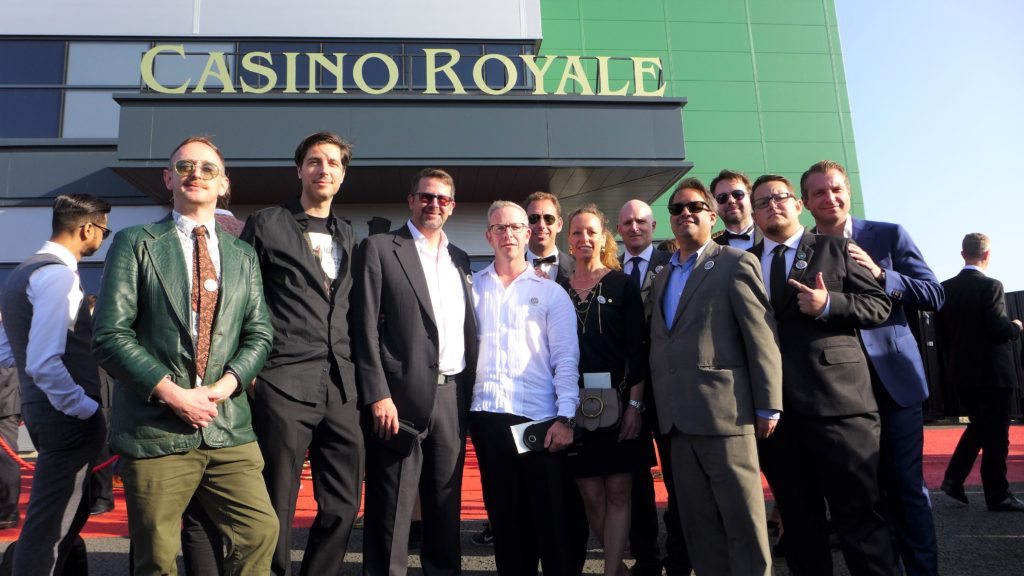 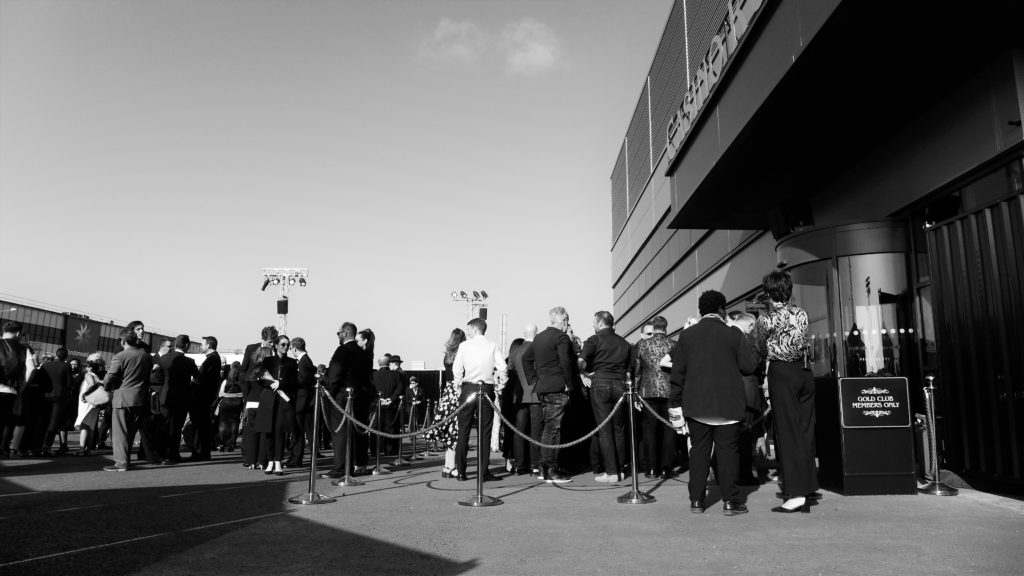 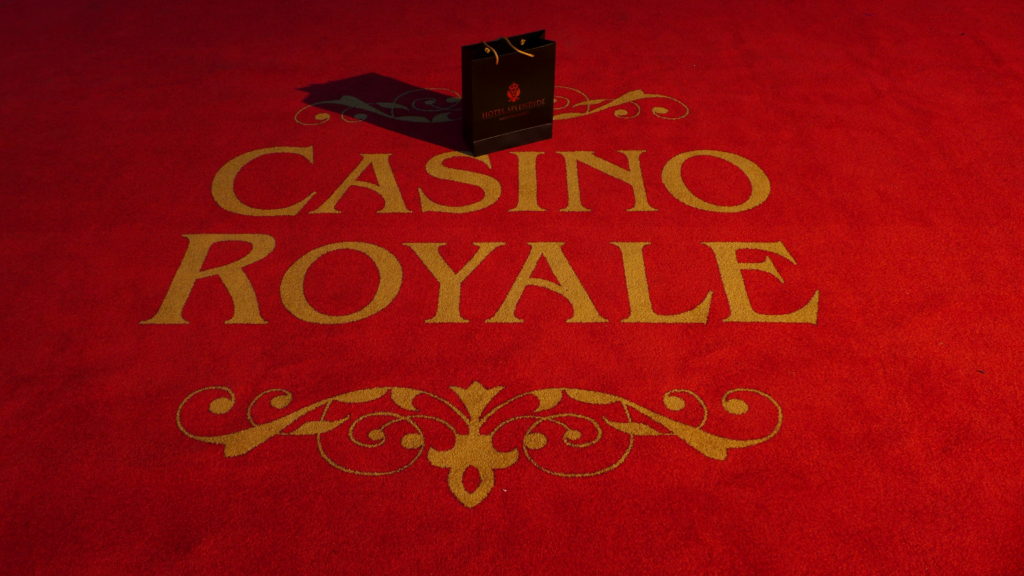