I’ve seen angels fall from blinding heights
But you yourself are nothing so divine
Just next in line.

It is most fitting that the Royal Albert Hall’s inaugural Bond in Concert event is Daniel Craig’s very own overture to his game-changing tenure as our man James. Following 2002’s ruby Bond bullet Die Another Day and a launch night with The Queen at the Hall, Craig’s last two Bond bullets Skyfall (2012) and Spectre (2015) have both held their royal world premieres in the illustrious Victorian temple to music and musicians. After over 140 years it is high time 007 got to properly hold the baton for himself at long last.

The Royal Albert Hall is of course no stranger to the music of Bond. As well as the many mash-up movie concerts co-starring the definitive sounds of 007, there have been countless Bond themed concerts held in Kensington’s glittering music hall – particularly June 2011’s stirring and brilliantly curated memorial concert to composer John Barry. After the full houses flocking to see the Albert Hall’s Films in Concert events performed live on the big screen with a full philharmonic orchestra accompanying every frame it now makes total sense for EON Productions and the Albert Hall to team up and begin what could well prove to be a rich run of live orchestral Bond movies. 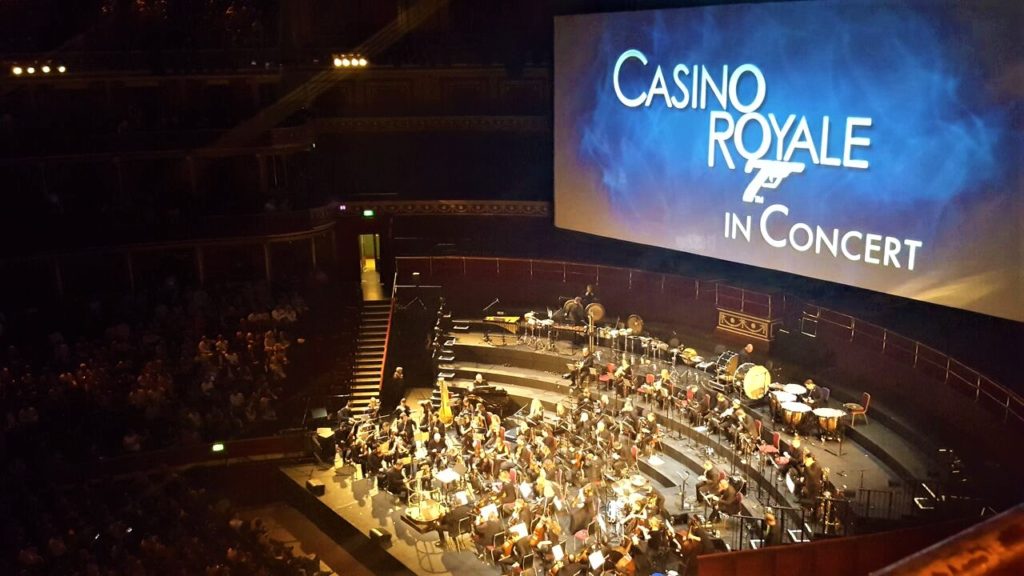 Launching with an onstage Q&A session with Casino Royale’s composer David Arnold led by movie music scholar Neil Brand, this overture to the main feature further proved the 007 tunesmith’s acumen at all things Bond. Very quickly the conversation is mentioning John Barry and the DNA of a movie sound that is still key thirty years after his last Bond film. According to Arnold and his remembrances of fun conversations and long lunches with the strong-willed composer every Bond song was “about cock“. And there is no more of a pounding cock-rock anthem than Chris Cornell’s You Know My Name. Arnold is justly very proud of his collaboration with the ex-Soundgarden and Audioslave powerhouse Cornell – as was the latter when it came to joining that very small club of singer with a star on that Bond singer walk of fame. There was no-one else Arnold wanted for the Royale gig and the decision to not replace Cornell’s vocals on this live concert was just. As were the notes Bond producer Barbara Broccoli gave to David Arnold when working on Royale. Arnold knew from reading the initial script that here was a Bond and a Bond actor that could do the things 007 was meant to do. The score had to reflect that. But it also had to show the romanticism of Casino Royale – and Broccoli knew exactly the hot shower moment where Arnold’s cues needed to  underline that turning point for the character and the Daniel Craig series. It is worth noting too how the last time Chris Cornell performed in the UK was at the Royal Albert Hall. There was a tiny touch of poignant poetry to this concert honouring his Bond performance in the year the singer tragically passed – a piece of news that hit Arnold hard.

Try to hide your hand
Forget how to feel.
Life is gone with just a spin of the wheel.

And with the entire auditorium darkening in matinee expectation for Royale’s monochrome overture, the Royal Philharmonic conducted by Gavin Greenaway soon begins to kiss kiss and bang bang the roof off the Royal Albert Hall as Daniel Craig’s debut Bond bullet starts running before you can whisper newly qualified Double O agent. 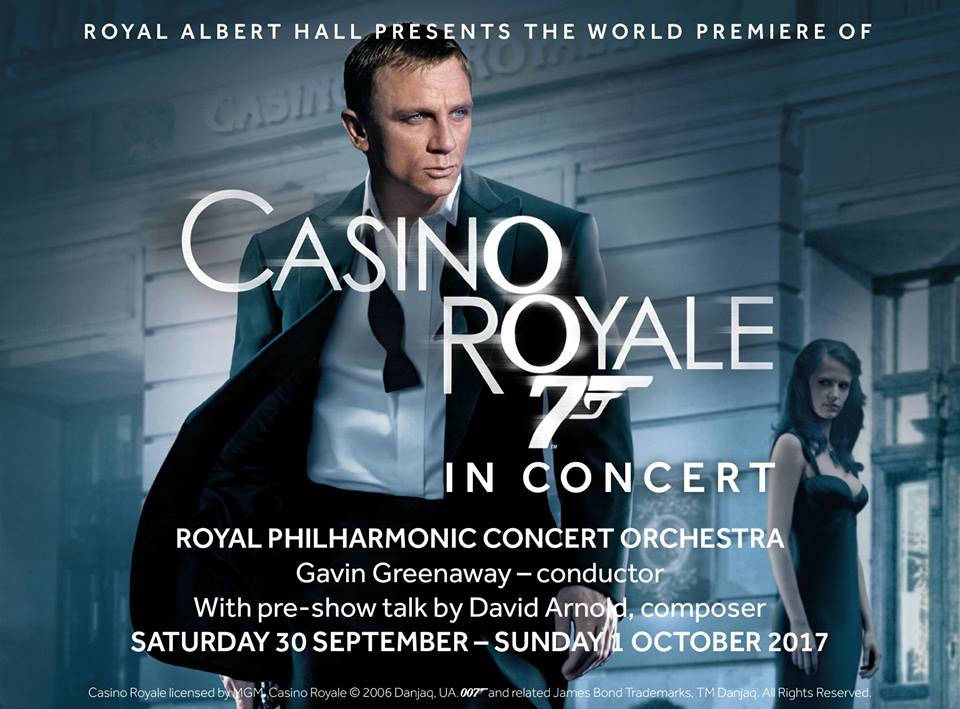 One of the most striking observations of Casino Royale in Concert is just how quickly you forget the orchestra is there performing live. Even some of the onstage musicians found their brief bursts of downtime distracted by Martin Campbell’s second Bond opus. With one of the biggest movie screens in the capital, it is impossible to watch a Bond movie and not get drawn into the unfurling cuts and drama. We all wait for our favourite cues, but here one has to remind oneself to watch the orchestra playing them. As the feminine undulations of the strings to a track like City of Lovers glide and soar with first and second violinists in a tight and mesmeric formation, across the stage the masculinity of the cocky brass pounds and reminds of the big band John Barry sound David Arnold pushes into his Bond scores. Under conductor Gavin Greenaway, it is not just the might and majesty of a Bond score that is laid bare in this Casino Royale in Concert. It is the utter science of the whole project – in the composer’s study, the recording studios and the music hall performance. Quietly watching Greenaway’s conducting screen marked up with the lines and coloured dots necessary for the music to match the onscreen action was oddly fascinating. A Bond score has to fulfil so many creative and technical challenges. That is then trip aced when performed live without the safety net of remixing, second takes, post production rendering and sound editing.

I’ve seen diamonds cut through harder men
Than you yourself but if you must pretend
You may meet your end.

It is one thing to play the music of Bond in a live context with the full might and orchestral glory of the Royal Philharmonic. It is another to actually attempt to match every frame and beat of the film in question. As identikit and ever tired multiplex chains lose sight of the experience and spectacle cinema should be first and foremost, it is down to others with more cine-passion to provide fresh and wholly immersive movie viewing experiences (as recently typified by Secret Cinema). Casino Royale in Concert is a great example of this new way of presenting – and loving – our movies. Besides, this curious and ever popular form of live movie music entertainment is as old as cinema itself – where moving imagery would often be accompanied by live music. But nothing sounded more contemporarily dynamic as the RPO following the bonkers and oxygen-stealing momentum of Miami International – one of the key action beats of Casino Royale and Daniel Craig’s entire tenure in the role to date. The relentless kicks and swerves of an orchestra housed in an ellipse of a building underscoring the ELLIPSIS triggered dramas of Casino Royale deserved its mid-movie applause.

This is as near to sitting in on a live scoring session one can get – except the musicians in question tend to not be so immaculately kitted out or as relentlessly on point as the RPO were for Casino Royale in Concert. What is made very apparent is just how the momentum of Bond, the pace and fortitude of the character is reliant and often created through his music. Bond has always been a sum of many creative parts. But the expectancy for a new 007 film has always been concurrent with the speculation and fan hopes surrounding its score and title song performer. The history of Bond scores is almost the history of the cinematic Bond himself. The ever-internalised character is made external through the score. Yet, the pounding fever of many of the soundtrack cues such as Stairwell Fight can be lost in the armchair home-viewing world 007 inhabits once his theatrical run is over. However, Casino Royale in Concert does not just remind how music flanks Bond’s other arm. It reminds too how much a big screen beast James Bond 007 himself very much always has been.

The romanticism of I’m The Money and the Venetian sweep of the ever stirring City of Lovers is always a time machine back to the Bond Arriving glory of the John Barry era. At the Albert Hall, it becomes a burst of heaven almost as electric a moment as when those end credits kick in and the composer himself took to the stage with his electric guitar to perform Royale’s end credit, bongo-tastic powerhouse, The James Bond Theme. Arnold talks of how we believe Daniel Craig would push through a wall when no other Bonds would have got away with that. This weekend the sounds of Bond pushed through the Victorian brickwork of the Royal Albert Hall as a cracking, ardent reminder just how it is rare it sometimes is to see these films again on the big screen. It is even rarer to be furnished with a live concert from an ensemble of the world’s best – and tightest – musicians.

So … On Her Majesty’s Secret Service next, yes? No, hang on, thinking about it – Diamonds are Forever, please. Actually, maybe You Only Live Twice. Or even Duran Duran doing A View to a Kill onstage live with Maurice Binder’s day-glo neon titles really shaking up the Victorian foundations?! Or a festive Quantum of Solace on Ice?!

Okay – just do another one soon or this fan will be crying blood over a baize gaming table. And keep the bongos. Definitely keep the bongos. That man was fantastic! With a rumour about what the next Bond in Concert could be, you might still need them! 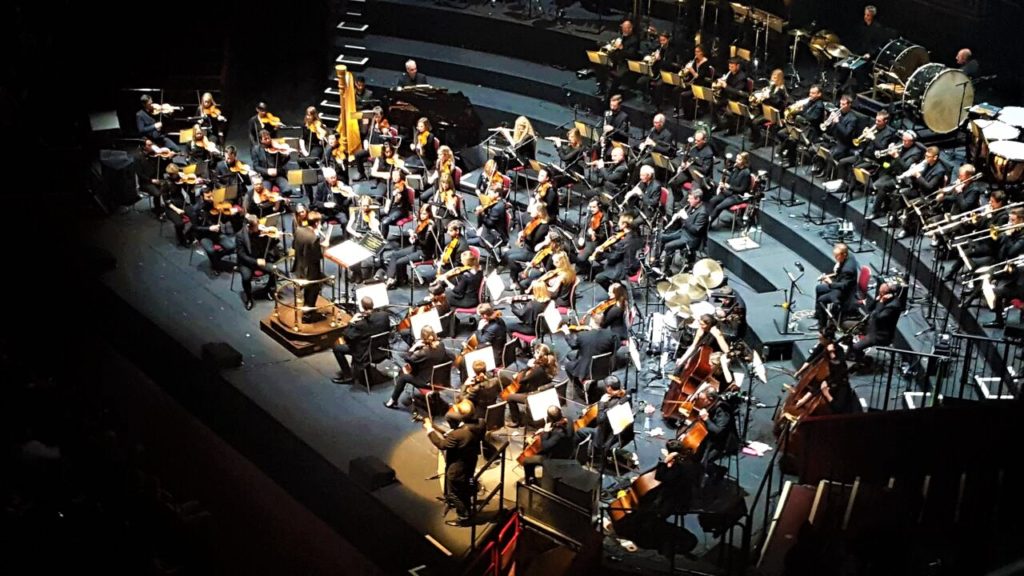 With thanks to the Royal Albert Hall, David Arnold and EON Productions.