There is a point in director Simon McBurney’s breathless The Kid Stays in the Picture when you realise that the onstage chat and spotlit conversations about John Huston and the shooting of the 1974 American new-wave classic Chinatown is coming from Danny Huston, the director’s own son. It is one of many crossovers and quiet ironies that shapes and shifts this spectacular piece of work. Co-produced by EON Productions’ Barbara Broccoli and Michael G. Wilson, this is a piece that is steeped in the real life experience, personalities and remembrances of those involved and their families.

“I went from royalty to infamy. Royalty fades. Infamy stays.”

Based on Robert Evans 1994 autobiography with some of the same invention and flair of the effortlessly rich 2002 documentary that followed, The Kid Stays in the Picture details the palm-tree lined life of former B-list actor Robert Evans as he struts, marches and sometimes stumbles  into A-list producer territory at Paramount Studios with some of the defining movies of post Sixties America on his CV. Love Story, Chinatown, The Godfather, Marathon Man, The Italian Job, Harold and Maude and more all passed over Evans’ Paramount Studios desk and no doubt the tense phone-calls which become the pulse and grammar of this production. With no one actor taking sole credit for portraying Evans, McBurney and co-director James Yateman have crafted a production that is tapestry of slithered conversations, heated remembrances and personal viewpoints which aim and fire at a relentless pace.

“Every man has the same weak link…ego.”

Encapsulated in one pared down set by designer Anna Fleischle, director and actor McBurney clearly knows both his theatre and his cinema. This production takes no prisoners as the baton of story and character is passed, dropped and often hurled around the main stage at the Royal Court. The projections which consume the stage and narrative are often achieved live, effortlessly edited into the drama with the cast dollying the cameras, pulling focus and – in many instances – creating onstage movie magic to stunning effect. Danny Huston remains a silhouetted narrator and reminder of where the Evans story is right now. Lurking around a lone studio mic, Huston is both a Greek chorus and contradictory footnote with a Orson Welles-like presence that adds to the sometimes Mercury Players  radio vibe of the piece. The mix of Christian Camargo’s younger, turtlenecked cat-about-town Bob and Huston’s dressing gown draped retirement Bob is strikingly well handled – with Huston literally and physically staying inside the picture until the time is right to step out into Camargo’s world. This is not a sympathetic Evans. It is the no holds barred producer, fighter and lover with a kneejerk instinct and often cavalier allegiances.

“I broke every rule.” 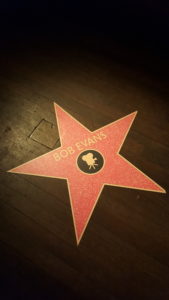 Very much like Hollywood’s own sidewalk walk of fame, this is a production with no single star – no mean feat when the kid needs to both stay in, tell and dominate the picture. The support mechanisms fall on everyone’s shoulders. Thomas Arnold’s Henry Kissinger is a bit too good, Ajay Naidu creates a feverish Roman Polanski, Clint Dyer’s top notch Marlon Brando booms across the stalls and Heather Burns is a duel delight as – amongst others – Ali McGraw in her requisite Sixties choker and Mia Farrow with her Vidal Sassoon bob. James Cagney, Frank Sinatra and Wes Craven all play their roles and the use of a lone refrigerator is curiously mesmerising.

With a supporting cast of studio stills, typed memos, top notch work by Peter Malkin’s sound team and coyly, often barely used soundtracks, the work and first-night-delaying effort that has fed into this work is – excuse the pun – paramount to its very survival and its energy. Voices ping at the audience, opinions underline ironies and the west coast, mid-century Americana of it all is often brilliantly overwhelming. The accidental reflections of a [much necessary] autocue safety net do not betray the talent on display, but instead merely remind of the scripted Hollywood world, memoir and documentary that feeds into this work. This is a play about searching. As the audience searches the stage for the source of a new voice, camera trick or projection, Robert Evans is searching for the end credits, a break and the only truth that matters, whether it is true or not – namely his.

The Kid Stays in the Picture is a living, breathing documentary as tightly edited and as forceful and relentless as any feature Evans himself greenlit from his Paramount desk. With a short run and no doubt American audiences in its sights, here’s hoping this production does indeed work in this town again.

The Kid Stays in the Picture continues at the Royal Court theatre until 8th April 2017. 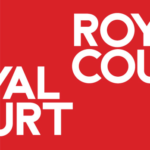