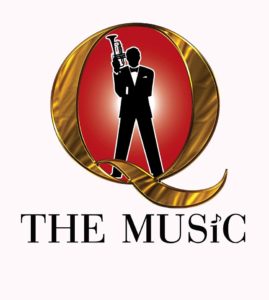 As Catching Bullets testifies, when it comes to covering 007 scores and songs this Bond writer is more anti than a bunch of SPECTRE agents at a night of Tosca. Big name orchestras, West End vocalists and even Dame Bond Sound herself Ms Shirley Bassey have sometimes laboured to recite Bond songs that are not theirs to begin with. With larger-than-life brass, abundant strings and volcano sized vocals, it is about both the devil and the detail – and it is notoriously hard to get right. Office party Bond gimmicks and cruise ship brass are standard victims in the off-screen world of Bond music.

But that is no longer the case. Rather than murdered standards, there is now a new standard-bearer when it comes to celebrating that Bond sound. And they are called Q The Music. Having missed the invite boat on numerous occasions to catch one of their shows, this 007 fan had only ever heard them from afar before. But thanks to the persistence of Q The Music’s manager and uber-Bond music sage Warren Ringham, this Bond fan finally danced into the musical fire and was mightily shaken and – yep, you got it. 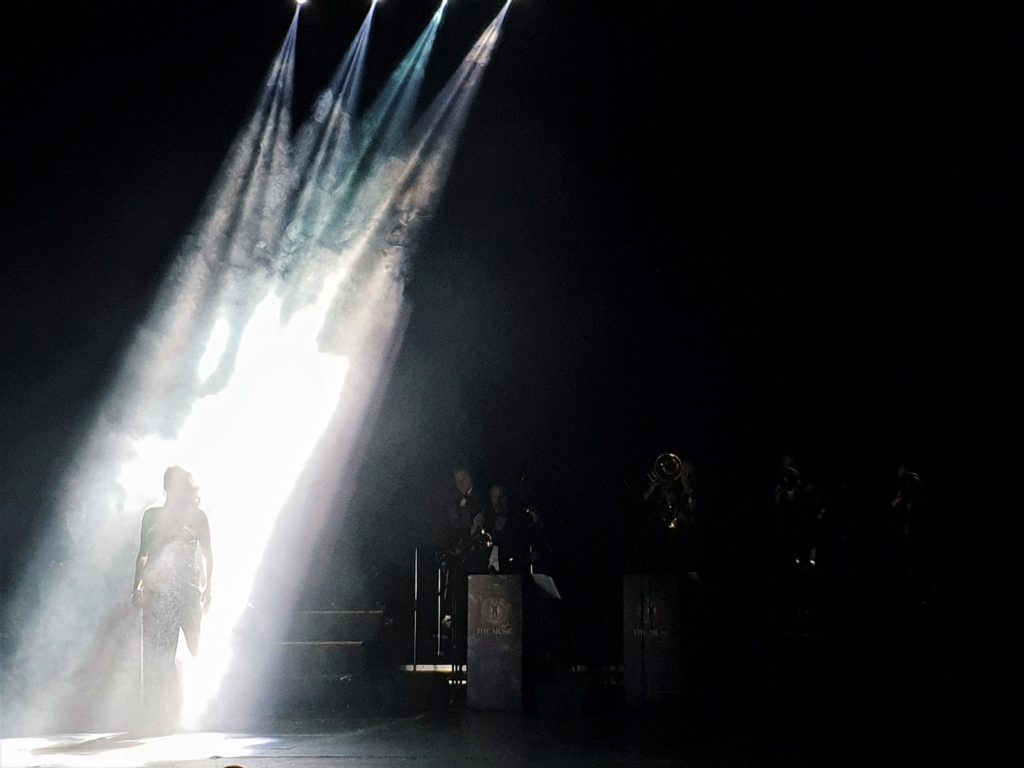 ‘You’ll never know how I watched you from the shadows as a child‘ – Q The Music’s Kerry Schultz flanked by the band and some killer lighting.

A hot ticket on the international cabaret circuit and the musical focus of many an exclusive party or celebration across the globe, 2018 sees Q The Music also continue to bring their shows, sounds and sparkle to British venues and Bond fans like themselves. With compering duties ably handled by The Spy Who Loved Me‘s Caroline Munro (alternating performances with Live and Let Die‘s Madeleine Smith), Q The Music’s repertoire is a veritable playlist of Bond’s best and most familiar anthems. Starting with 1962’s Dr. No and taking that chronological baton forward through the best of John Barry, Don Black, Marvin Hamlisch, David Arnold, Bill Conti, George Martin, Hal David, Bono and The Edge, Leslie Bricusse, Lionel Bart, Paul Epworth, Sam Smith, Tim Rice, Chris Cornell and Anthony Newley – Q The Music remind of the grand and ongoing project that is the Bond sound.

Just like Bond movies are ultimately tailored beasts of the big auditorium. So too is the Bond music. Ringham and his fellow Q agents of music not only remind of the rich legacy of 007’s various sounds, they know how they were created, structured and performed. The brass DNA of Bond particularly is joyously administered on stage – with Ringham and fellow musicians stepping up to the mics to honour those notes, musical punctuation and fan-knowing riffs  that are the heart and soul of many a Bond cue. Under Ringham’s trumpet (and totally honouring Bond trumpet legend Derek Watkins), that early Sixties John Barry sound comes blaringly alive to demonstrate the orchestral underpinning that Barry brass was and still very much is. And this fan was most curious to finally note the power and might of the drums in a Bond cue. These songs are made in the percussion as much as the strings and brass. 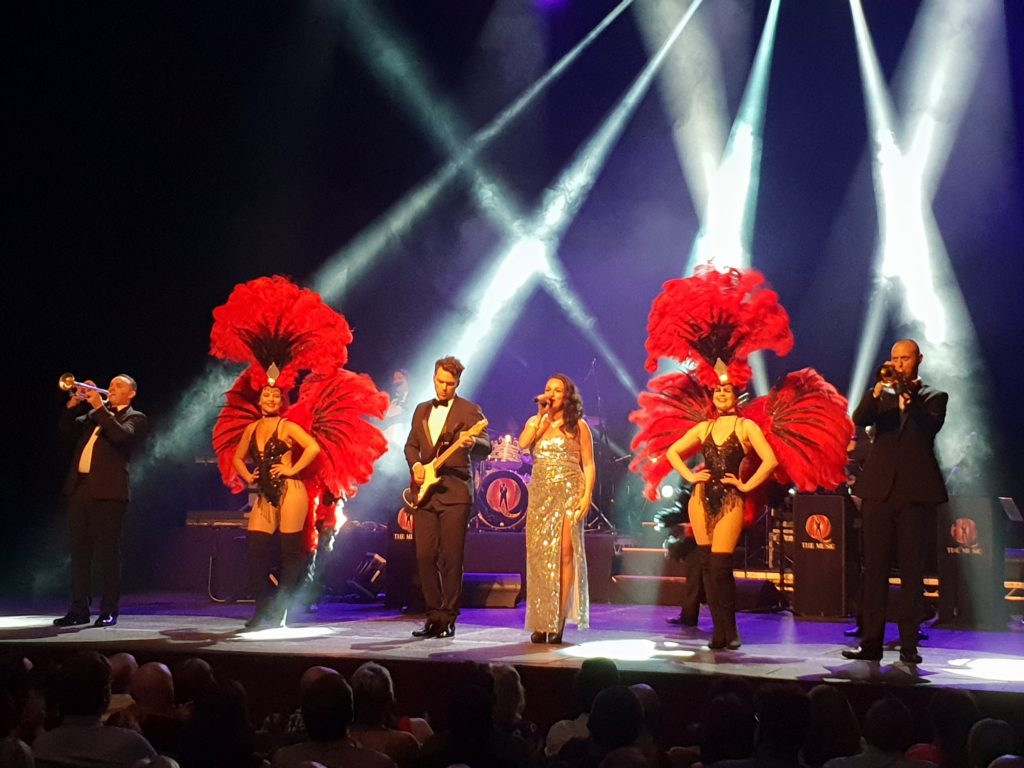 But the legacy of the Bond sound is also those vocals – those trapped bird laments and survival anthems that are the life and soul of 007 onscreen. In following Bassey, Munro, Jones, Sinatra, McCartney, Armstrong, Lulu, Simon, Coolidge, Easton, Cornell and the popsters Duran Duran, A-Ha, Jack White and Alicia Keys, Adele and Sam Smith – Q The Music’s biggest challenge is to render fresh life to songs whose cultural reach stretches way beyond the movies they come from. Cue Kerry Schultz and Matt Walker’s brave steps forward to take the mic. The tendency is always to mimic, to Bassey those wrists and inflections and Tom Jones the back end off those masculine high notes. Yet, Schultz particularly breathes different life and fresh intonations into those well-trodden, but precarious numbers. Walker on the other hand brings that other era Matt Munro quality – something that lends itself rather endearingly to the male soloist sounds of From Russia With Love and Only Myself to Blame. To not slip once or get out of your depth faster than a Lotus Esprit on a Sardinian beach is a massive achievement when performing the Bond sound. And when two performers bring those 007 classics to life with chronological aplomb you unexpectedly get a brilliant lesson in the shifting history of pop, its vocal timelines, how the beats of a Bond lyrics have evolved and the full aural history of a franchise. Often faster and way more intricate than many of us realise, seeing these works live is where their (and the band’s) skills, penmanship and sense of production truly shine. And this is an ever shifting programme – with new additions, surprises and musical detours all Bond music fans will appreciate. Q The Music know the quirks, guilty pleasures and unchecked classics of the Bond sound. The encore we experienced of KD Lang’s Surrender was particularly slick and a Roger Moore tribute was from the heart. We’ll forgive them for not including a three hour tribute to A View to a Kill. Maybe next time. 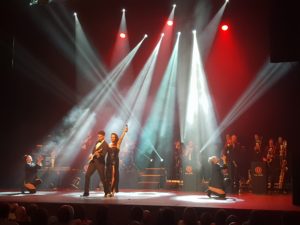 ‘I know the player with the slick trigger finger‘ – Kerry Schulz and Q The Music’s Jon Wright.

But Q The Music do not just perform the works with the requisite bombast and blare. They know the value of keeping that Barry bongo sound in the early works, the soaring brass, midnight glamour and Moogs of the late Sixties, the funk-ridden stops and reggae starts of the early Seventies, of upping and stretching the disco synths of Bond’ 77,  the sax and violins of the early Eighties romantic Bond and the West End meets Benny & Bjorn affectations of All Time High, the U-turn electronica and guitars of A View to A Kill and the new era Oscar-baiting richness of Chris Cornell, Adele, and Sam Smith. It is the ensemble’s commitment to musical detail that marks them above and beyond Bond covers. Those Barry quirks, those musical turns of phrase, the playfulness, the sexually charged riffs, the sound of a genre… Q The Music have mastered it.

The standing Double-Ovation was deserved.

Many thanks to Warren Ringham, Caroline Munro and the entire Q The Music Band team.

Check out Q The Music, sign up to be an email friend for discounts and all news and updates, and just check out their videos.