In the month Watching Skies finally lands its mothership in a Californian forest of Star Wars and Spielberg nostalgia, author Mark O’Connell looks at the onscreen legacy of a space scoundrel and childhood icon…

“Han Solo!” rejoices a hundred-year-old pirate queen upon glimpsing said space rogue entering her gangster-dive-bar-cum-castle in 2015’s The Force Awakens. Thirty-two years after 1983’s Return of the Jedi and the moment Han Solo, his Skywalker and Rebel pals bid goodbye to the Star Wars saga at a victory Ewok barbecue, this wise matriarch is merely voicing all our enthusiasms at the return of a screen legend. Part adulation for the character, part reverence for the actor Harrison Ford, 2015’s Episode VII steers a careful path between nostalgia and future. Key to that is the return of Han Solo. As both he and Ford take on the veteran-along-for-the-last-ride baton from Alec Guinness and 1977’s A New Hope – they once again remind how the cinematic might of Star Wars is so much more than just Jedis, Skywalkers and X-Wings. 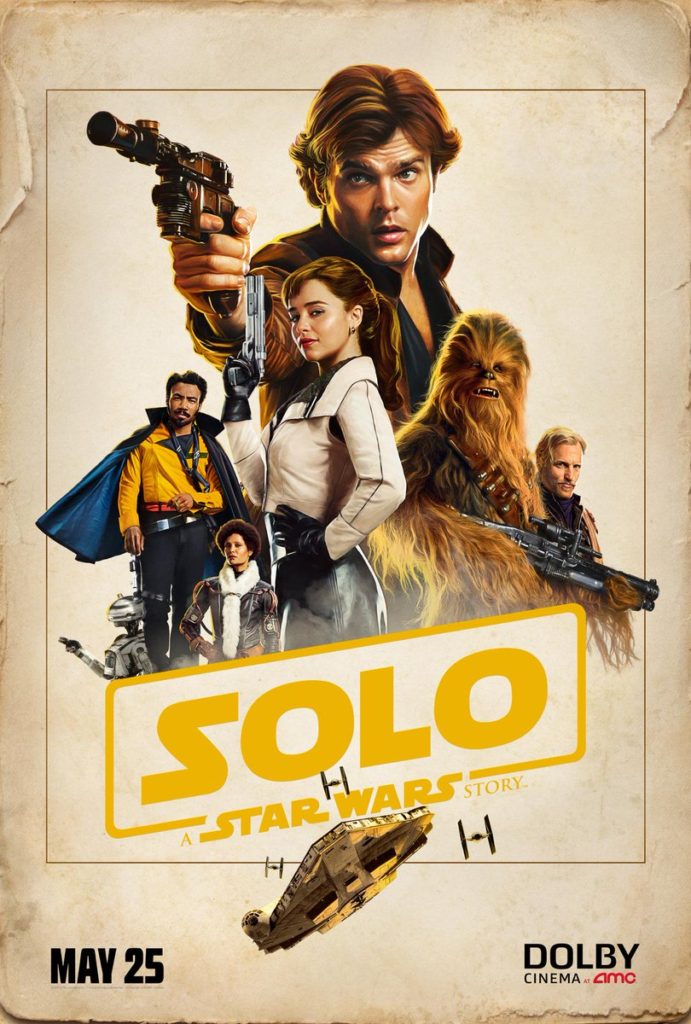 As audiences and sky kids the world over complete final pilot checks and buckle up before the May 25th release of Solo – A Star Wars Story, it is already clear the adventure, heroism, confidence, romance, morality and swagger of Star Wars springs more from Han Solo than his fellow story counterparts. The very DNA of the saga might have pinned its soap opera story structures and narrative grammar to Keeping Up with the Skywalkers. However, the colour, pace, bravado and tempo of Star Wars is often smuggled in by Ford’s Corellian rascal.

Arguably, the world of Star Wars is more about dive bars, gambling dens, bounty hunters and betrayed allegiances than it is Jedi Councils and Imperial Senate negotiations. It is reneged deals, stolen looks and stolen ships, make-do-and-mend manoeuvres, spanning a Death Star corridor unnoticed and last-minute rescues via garbage chutes. That is all Han Solo – the guy whose world-weary experience of the Empire, its policing habits, operational shortfalls, and troop behaviour first informs ours. As he pushes Ben Kenobi on The Force and being a Jedi (when audiences had heard of neither), Solo is the critical voice and exposition sceptic for A New Hope (1977). Later, when Oscar Isaacs’s cocky pilot Poe Dameron challenges Resistance battle etiquette and politics in The Force Awakens (2015) and The Last Jedi (2017), it is the boy-racer Han Solo that the writers are wilfully evoking. Both characters need no explanation, back story or long-term arc. They just operate in the moment – something a good Star Wars movie should achieve too.

In suggesting Solo is a rogue who operates within the vagaries, scum and villainy of the galaxy, alien bar-flies become equally integral to the Star Wars universe because they are integral to Solo’s world. That most Star Wars of tropes – the alien cantina bar – is first introduced because A New Hope needs to introduce Han and Chewbacca to Luke, Ben and 1977’s audiences. And when the original saga first takes a narrative risk of jettisoning a valued character, it is Solo who is frozen in carbonite and thrown into the story wings without warning. The Empire Strikes Back doesn’t end on a downbeat note because of who Luke Skywalker’s paternal parentage really is. It closes on the desperation of separation because Han Solo has been carted off by bounty hunter Boba Fett in a narrative rug-pull no-one saw coming.

As sky kids immersed in George Lucas’s Star Wars world like a protocol android taking a much-needed oil bath, we were utterly infused with these characters. When the angelic Luke Skywalker with his blond locks and virtuous soul got too saintly for us junior school kids already contending with the nuns and going to church what felt like fourteen times a day, it was often Han Solo we would be during the school lunch break. When being allowed on the summer school field was the best thing in the world ever, Han – or ‘Hand’ as our younger selves sometimes mislabelled him – was the morally hazy cool cat we wanted to be first. With his DL-44 blaster gun, ammo belt, those slick leather boots, those trousers with that nifty yellow seam and a cool waistcoat in our minds, we would run across that freshly cut grass in our Catholic blue ties like we were evading Death Star Stormtroopers (or lunch duty nuns as they were also known). And when the colder months came, it was easier to pretend our early 1980s parka jackets were Solo’s ice planet Hoth wear than use a white sheet to be Luke Skywalker in the dead of a British winter (okay, as Watching Skies testifies, I was maybe guilty of both sartorial cosplay homages… amongst others). 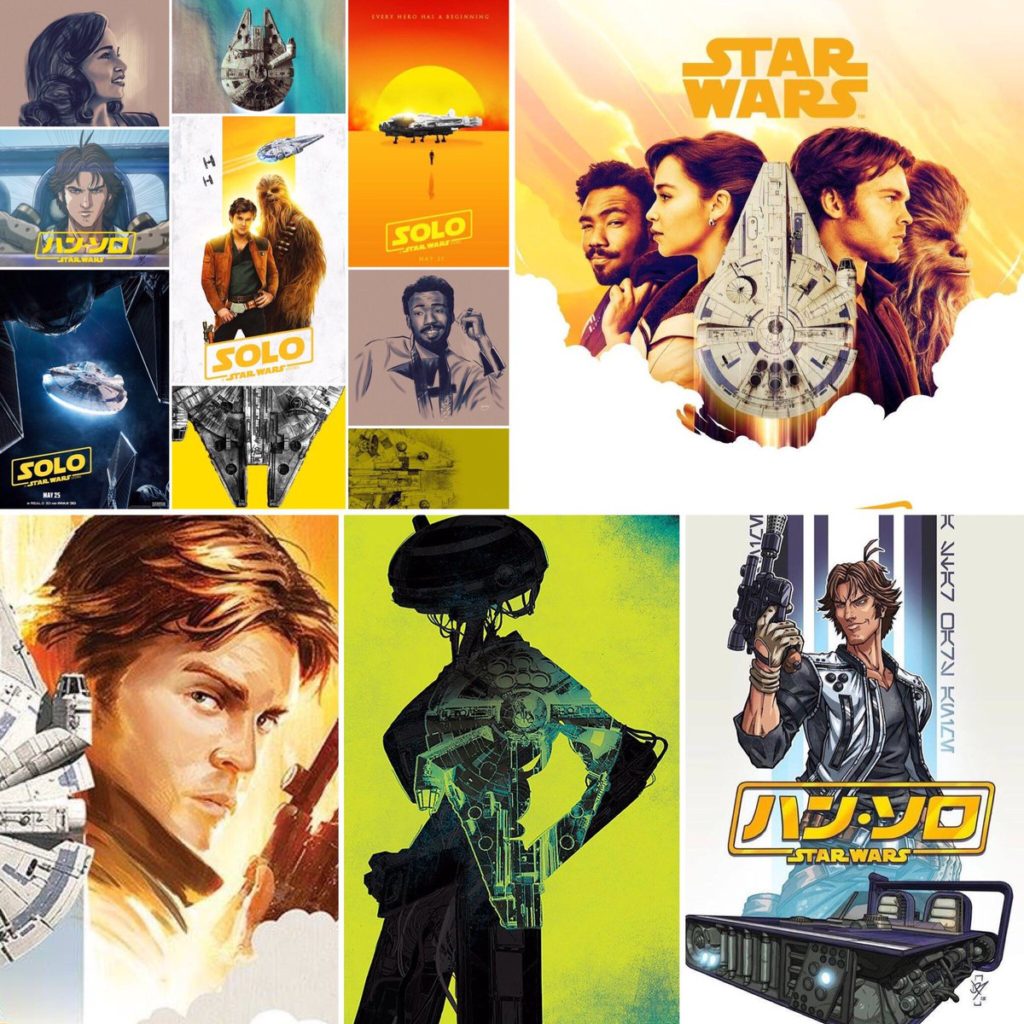 If Luke Skywalker is the King Arthur of the piece, then Han Solo is Lancelot. It is Solo who is the first non-Jedi we see yielding a lightsaber (as he attempts to slice open a snow creature for emergency warmth in The Empire Strikes Back). It is Solo who first points a pistol at villain Darth Vader – and lives to tell the tale. It is Solo who introduces the first Star Wars alien we need to like – in the form of faithful Wookiee wing-man, Chewbacca. It is also Solo who first brings proper romance into Star Wars. When the side-bar love stories of the prequel and sequel trilogies try to work up some tender screen time, it is always the bond between Princess Leia and Han Solo they are trying to emulate. With a script initially worked on by Leigh Brackett (The Big Sleep, Rio Bravo), The Empire Strikes Back was eventually re-written into further life by Lawrence Kasdan and producer George Lucas (who had both recently given movie breath to Ford’s Indiana Jones in Raiders of the Lost Ark). It was 1980’s bickering love-story-cum-road-movie that sealed Solo’s cinematic legacy – which then made total sense when Kasdan returned to work on the Solo-skewed The Force Awakens.

And, of course, it is Solo who pilots the Millennium Falcon – the £22.95 must-have from Argos us 1980s kids needed more than life itself. The X-Wings are the Spitfire scamps of Star Wars. The Falcon is the Rolls Royce of the galaxy – or maybe the second-hand Studebaker with room inside for everyone. Watching Skies describes Solo’s famed ship as ‘the physical embodiment of the matinee swagger of Star Wars, the Falcon was and still is a plump space nickel at odds with the jagged, industrialised angles of its enemies. It is a balletic station wagon, familiar to any kid of the 1970s and 1980s whose dad had an old banger of a car that needed a thump and a prayer to make the corners.’ That Corellian freighter is a support character of its own – a instantly recognisable motif, a mothership of influence and a signal of the kinetic drives Han Solo lends the saga. As the Solo promo art deliberately echoes the creased, torn and worn posters on every kid’s bedroom in the early 1980s, the iconography of the Falcon has never been stronger.

And now the history of Star Wars, the Millennium Falcon, Chewie and Han Solo are all about to fly full circle. With actor Alden Ehrenreich taking on that DL-44 blaster from Harrison Ford and tackling the Han role for a new era, director Ron Howard (Apollo 13, Willow, Rush) is taking those boy racer beats of George Lucas’s American Graffiti and repointing the onscreen history and value of the character. After its high profile and potentially grievous production gambles, director sackings and eleventh-hour high stakes bets, Solo – A Star Wars Story looks to have possibly completed the Kessel Re-run with a vigorous, humoured, and buoyant adventure suggesting how it was definitely director Howard that shot first. And last. That Solo legacy is a brave one to take on. The role is both Ford and Han, forever pitched in an analogue world of derring-do, off-story rivalries and handbrake turns. But maybe – just maybe – Ehrenreich and his 1970s sports track hair paired up with Donald Glover’s Lando could be a new movie marriage made in Cloud City. Bond, Superman, Batman… they are all screen heroes who survived a new face in the cockpit. 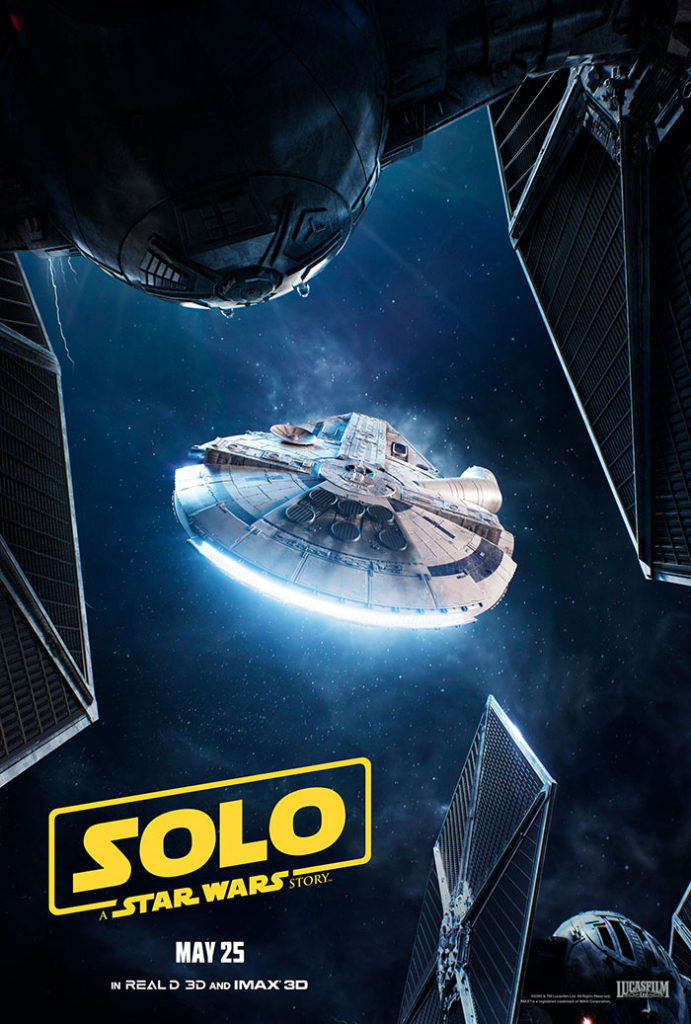 From those western-minded guitar twangs on the Solo trailers to analogue aliens, high-noon exchanges and decaying, re-purposed spacecraft, the biggest Star Wars movie gamble since 1999 could well prove to be a high roller after all. With a love story that is clearly about a man and his future freighter ship-to-be, and less the ret-conned love affair between a scoundrel and Emilia Clarke’s Qi’ra, Solo could well achieve what every new Star Wars movie must get right at any cost – new worlds, new nuance, and new storytelling in an otherwise familiar context. And if any screenwriter is worth their Crait salt when it comes to understanding Star Wars, then it is a Kasdan. Actually, Solo is boasting two this time round – a returning Lawrence and his son Jon.

Already, the vibe of Neil Lamont’s production design for Solo is that vital sense of the underbelly, the backstreet, the scam, the seedy watering hole, and the wretched deal. Solo looks to be a blue midnight world of stolen cars, high stakes battles on low-life gaming tables and boneyard politics. A sort of Baby Falcon Driver perhaps. With the subterfuge of society torn apart by industrialised tyranny, the vice and lawlessness of Star Wars could well be back. Solo – A Star Wars Story looks to operate in a story world wilfully tied to that of its 2016 counterpart, Rogue One – another sidebar prequel which blatantly lends its ragtag scoundrels a bit of Han’s fortitude and improvised pluck. Furthermore, Neil Lamont designed both movies, producers Simon Emanuel, Kathleen Kennedy and the late Allison Shearmur return, legend John Williams is on motif duty again, Pinewood Studios opened its hangars and backlots once more, and Glyn Dillon and David Crossman return to the costume cockpit. Add to that the editor of Oliver Stone’s JFK (Pietro Scalia) and the cinematographer of Arrival and A Most Violent Year (Bradford Young), the efforts of franchise first-timer and underrated composer John Powell (How to Train Your Dragon), and maybe Solo did indeed pull it all off in less than twelve production parsecs after all.

With a few weeks to go before the fourth Star Wars film in three and a half years is released, the lack of story information is its strongest dice on the baize right now. Again, we didn’t need to know much about Han for the character to work. When Rogue One so memorably became a literal baton handed onto 1977’s A New Hope, it achieved so partly because it kept its production cards close to its chest and resisted to endlessly herald a film the fans were already waiting for. With the news that Alden Ehrenreich has signed on for more Solo action, maybe the movie about one of space’s most infamous smugglers also kept its hand held tight to its brown suede jacket and pistol holster after all.

Mark O’Connell is the author of Watching Skies – Star Wars, Spielberg and Us (The History Press, May 2018).

For a wealth of official, alternative and celebratory created Solo art, blast over to Watching SOLO’s Art on Facebook.