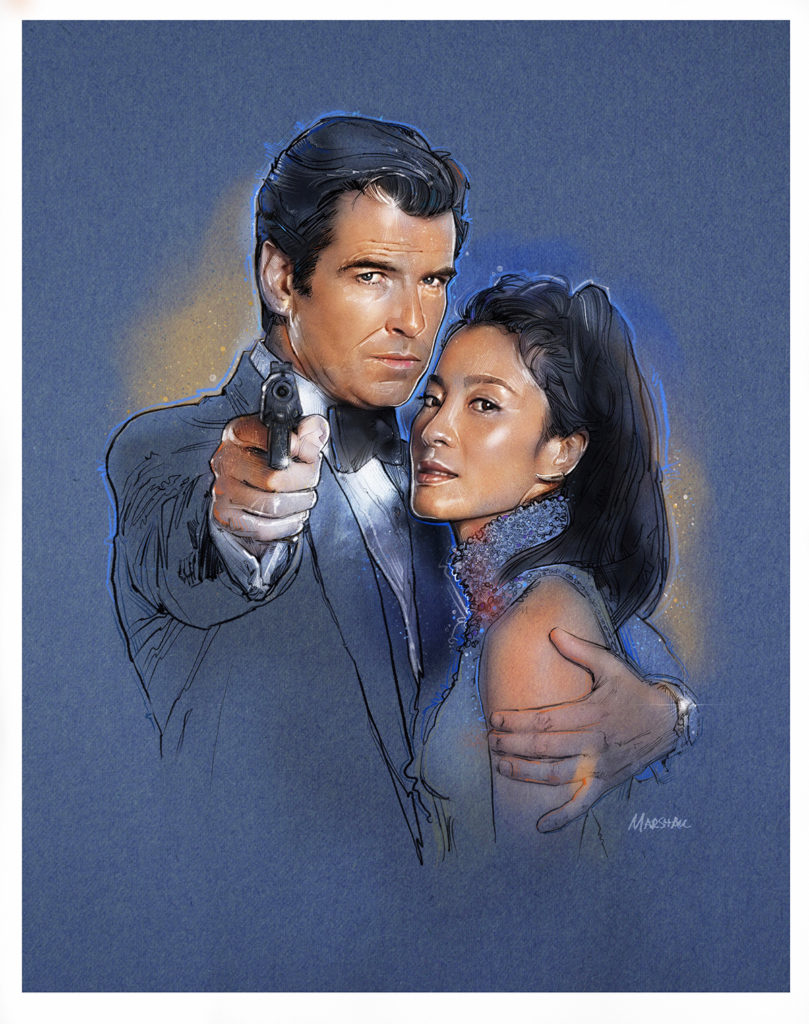 Twenty years ago and in the midst of Brit Pop glory and a repointing of James Bond 007 as a relevant, suited hero, EON Productions released Tomorrow Never Dies. Pierce Brosnan’s second spin of the 007 dice after the rebooted firecracker that was Martin Campbell’s GoldenEye two years before, this ever prescient Bond bullet is easily the tightest and most contemporary of the fifth Bond’s tenure. Spinning its headlines in the murky world of fake news a whole two decades before an orange clown thought he had invented the concept, Tomorrow Never Dies is a front page cracker of a Bond movie – and easily Pierce Brosnan’s most winning and slickest 007 opus to date. Yes, it’s his best. I said it. From its branding, score, costume design, contemporary hued European backdrops, performances, pace and sense of fun, Tomorrow Never Dies is one of this Bond fan’s top ten bullets.

Tomorrow Never Dies may well be a Bond film that kicks off with The Spy Who Loved Me inspired naval machinations on the high seas and gets our man back into his Commander Bond uniform for the first time since 1977, throws in not one but three British Navy warships staffed by a whole crew of up-and-coming British actors (Gerard Butler and Hugh Bonneville for starters), weaves in a media network with a sprawling reach and is forever dangling the threat of a China-skewed Pearl Harbour or that 007 plot gift that keeps on giving – World War Three. Yet there is no need for Carver-sponsored subtitles for the hard of following in what is the tightest and least cluttered of the 1990s Bond bullets.

Whilst 1995’s GoldenEye, was the long awaited return of the onscreen Bond and the beginning of a second golden age of our man James under the renewed steerage of producers Barbara Broccoli and Michael G Wilson, Tomorrow Never Dies was the film where Brosnan’s Bond starts running. It is certainly the film where its lead actor finally settles into the role. Bond ’97 is where David Arnold joined the EON team and arguably produced his best Bond work with a score that took John Barry’s Sixties baton and re-figured it to the more electronically minded world of homage meets musical invention. Arnold brings in zeitgeist synth-peddler Moby, The Propellerheads and the less obvious KD Lang for the best not-an-opening-title-tune-that-should-have-been-one 007 has ever had. He also brings back Bond lyric wordsmith Don Black (whose last stint on a Bond was 1974’s The Man with The Golden Gun). Bond ’97 is where the EON interest in the sub-industries of espionage come to the fore (notably Vincent 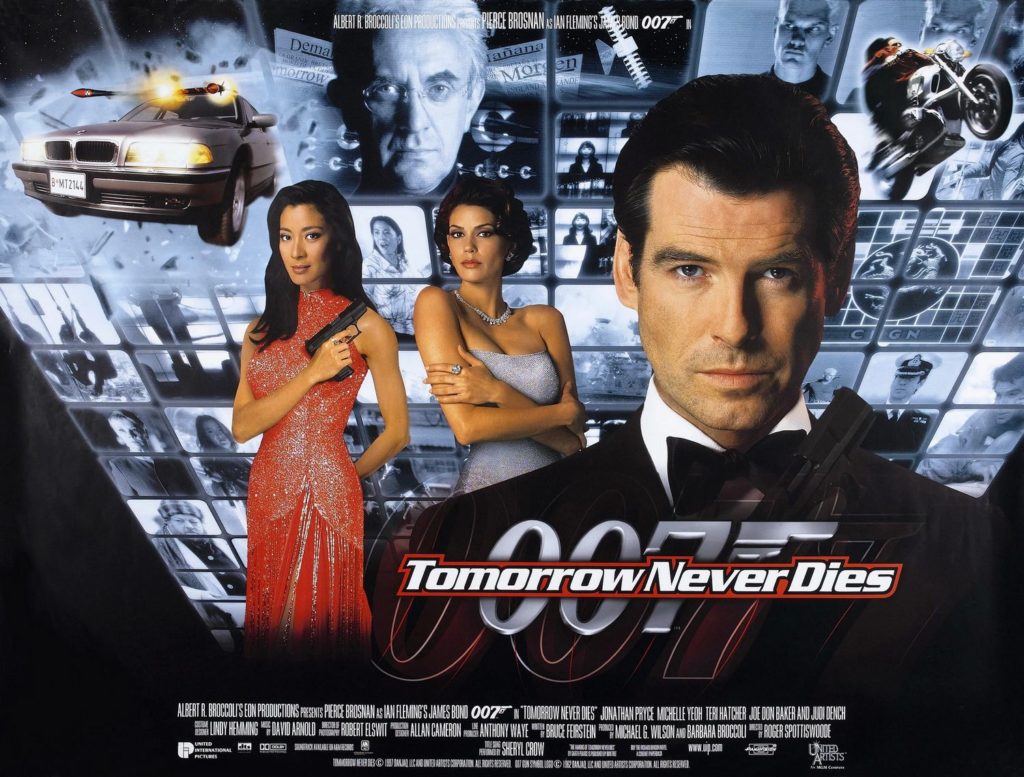 Schiavelli’s scene-murdering take as fake suicide peddler Dr Kaufman and the detail of a bag of cocaine in Carver’s safe). Bond ’97 sees our Whitehall avengers on the back foot as armed cars tear through London and the usual desk-bound mission invitation is in the back of a speeding car and Judi Dench’s M gets to show her theatrical teeth as she rips apart various male British thesps with a twinkle-eyed aplomb. And Bond ’97 is also where the new era of 007 possibly caught up with that feline pace and sense of sadistic fun of the Connery era. Brosnan is inventive, quick witted and turns a respectful head at fellow agent Wai Lin (Michelle Yeoh) as she Emma Peels her way through what Roger Moore Bond films used to call “the Far East“. This is a film that is not tripped up by the turn of the century fears and changes of global guard as it presents a Nehru-suited villain one clickbait click away from stroking a white Persian cat and creating a business template clearly Christoph Waltz’s 2015 Blofeld took a little to heart.

The 1960s Bond villains embrace and appreciate technology as a good way of achieving bad things. But the Brosnan adversaries have been left bitter and adrift by the new world order. The well-heeled likes of Elliot Carver, Alec Trevelyan and Die Another Day’s Gustav Graves all need tech-savvy geeks with better I.T. skills in order to achieve their global naughtiness. Maybe Elliot Carver should have started his own social network. That is how he could have taken over the world. He could have Poked and Liked his way into China, plus charged every user a dollar to post a home-made video of their cats being amusing near pianos.

Tomorrow Never Dies also marked the last involvement of vital Bond producer, Albert R Broccoli. He sadly passed away in the summer of 1996 as pre-production was ramping up at EON Studios – a temporary soundstage at the former Radlett Aerodrome near Frogmore.  Not an easy shoot – and one whose end saw the tragic deaths of EON friends Dodi Fayed and Princess Diana who were scheduled to visit the set the week after they died – Tomorrow Never Dies still emerges as a tight, fun and stylish caper that has maybe aged much less than its fellow Nineties Bond siblings.  “The distance between insanity and genius is measured only by success” remarks villain Elliot Carver (Jonathan Pryce) under the penmanship of writer Bruce Feirstein. Albert R Broccoli had long proved that the best line in many a Bond movie was as much a tribute to his legacy as the end-credit nod to his passing.

Whatever you’re after… trust me, I’ll deliver.

Catching Bullets – Memoirs of a Bond Fan is available now.