THE OTHER FELLOW’S CHOICE – Catching BECOMING BOND on DVD

When it was released on Hulu US earlier in 2017, the unorthodox and fiction-baiting Bond documentary Becoming Bond didn’t get to fire at all audiences. The curiously frank and acerbic tale of one-time 007 George Lazenby, Becoming Bond was a festival favourite and is another piece in the Bond film narrative.

As the DVD is now released and allows all Bond fans to witness this original take on the other fellow’s rise, fall and rise again, Becoming Bond skis onto the home market and should now find a wider audience… 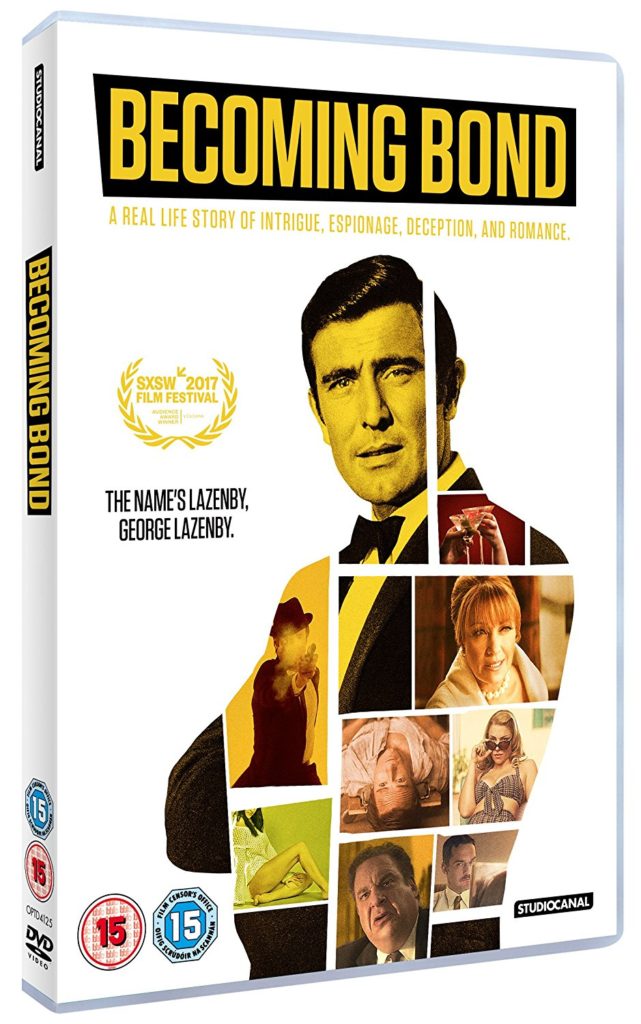 Who needs white dots and a John Barry guitar overture? “In 1969, a poor Australian car mechanic who had never acted a day in his life landed the role of James Bond” is nearly as enticing as any gunbarrel opener for any 007 film. Under the auspices of American writer/director Josh Greenbaum, Becoming Bond works round, over and sometimes slap-bang through the grammar of the cinematic 007. As it details the cocky rise, inevitable fall and often comedic libido of the self-declared ‘larrakin’ George Lazenby, Greenbaum’s part-mockumentary, part tribute and all-round love letter to the second onscreen Bond is a rich odyssey of childhood, the sexual revolution, the tail end of a very different era of movie production and mid-century masculinity. Becoming Bond is about the often stranger-than-fiction true story of George Lazenby, an Australian car mechanic, come model who eventually landed the role of James Bond in 1969’s influential Bond bullet, On Her Majesty’s Secret Service. With very little acting experience under his belt, Lazenby was then purportedly offered the next six Bond films and a $1 million signing bonus. He turned it down.

“The first time I ever stole a car, I was six years old.”

In a documentary era of dramatized filler, emotive padding and first person fluff, Becoming Bond wears its heart on its rolled-up sleeve from the outset. And does so with a great and fast laconic swerve. As Young George (Jason Maybaum) recounts stealing his first car, Greenbaum relishes in the back-projected, shaken-car-against-a-green-screen movie joy and retro artifice of it all. Less Bond, more Malcolm Turnball in the Middle as Young George waves at roadside kangaroos, brings snakes to school and winds up his school teachers in what very soon becomes a joyously fresh addition to the Bond movie backstory. Whilst still pitched of course within that Queen and Commonwealth mid-century Australia, Becoming Bond relishes in Lazenby’s self-reported difference from Connery, Moore and Craig – as a Wes Anderson lens keeps the Young George centre-frame as chaos bounces around him, his hormones soon rage as loud as his dirt-bike freedoms and all manner of chests, car-shagging and adolescent fumblings soon ensue.

In a curious mix of Errol Morris-style interviewing techniques alongside Greenbaum’s often heightened and quickfire recreations of what today’s Lazenby chooses to recall, Becoming Bond‘s chief swagger emerges from how it agrees, supports, echoes, undermines and occasionally contradicts its lead subject. With an onscreen Lazenby that is far more 2017 buff and physically polished than any men of 1969 really were (likewise, Peter Hunt was never that good looking!), the reminiscences fast become rose-tinted flashbacks, hand-brake turns lend great wit, fun and era, and every now and then Greenbaum holds the take of the veteran Lazenby and lets a melancholic honesty break through that bravado of hindsight.

The artifice and speed of Becoming Bond is one of its triumphs. Taking a stylistic baton from Stephen Hopkins’ 2005 The Life and Death of Peter Sellers (featuring Geoffrey Rush – another Australian in an iconic British role), Greenbaum, production designer Caity Birmingham and cinematographer John W. Rutland craft a deliciously golden, nostalgic Queanbeyan world of apprenticeships, car dealerships and drinks opportunities with the ladies. This is a coyly observed retro-pallette of Pringle sweaters, flat pants, mod boots and more car shagging in leather interiors. It’s Mad Australian Men with Lazenby as Don Draper. Very soon the twenty-something Lazenby is London bound and naturally ending up in that Aussie abroad nirvana that is Earl’s Court. Despite George’s schooling in how Sixties men can be models too, an eventual modelling career is soon taking off for Lazenby – allowing Greenbaum to remind how Lazenby was at one point “one of Europe’s top models”. A famous chocolate bar advertising gig later and “life was on the up and up”.
The influence of Michel Hazanavicius’s vintage-skewed OSS 117 – Cairo Nest of Spies (2006) and OSS 117 – Lost In Rio (2009) is writ large in Becoming Bond. Just like Jean Durjardin’s agent Hubert Bonisseur de La Bath, Lawson’s Lazenby is the last to get the gag and the first to look damn cool sat in an egg chair with a turtle neck panache. Kudos must surely go too to costume designer Paula Tabalipa who does more to help this documentary around its rights and copyright issues with a knowing neckerchief, a pair of swimming trunks, a short hemline and a long silhouette than any unnecessary, much-seen clip of Lazenby in the role that made him world famous. And notorious. Likewise, the production design stealthily reminds of the Japanese parasols of You Only Live Twice and even the shadow-drenched boardroom of Spectre are all thrown in for Bond shade. And playing the role of Lazenby’s agent of the time Maggie Abbot is none other than Solitaire herself, Jane Seymour – curiously straddling her era of the third 007 with Lazenby’s second. Like all of Becoming Bond, such casting avoids being a fan-baiting wet dream. If you don’t know Seymour’s history with the Bond films, it doesn’t matter. If you note the coy Bond winks, that doesn’t matter either. The pace and drive of this film is found in its sense of time and story filtered through the memories of someone who has had half a century to think about it. This is one for everyone. Not those that have watched On Her Majesty’s Secret Service 42 times. Okay – it’s for you too!

Pitched very much in an Australian cinema world of The Year My Voice Broke, Flirting and even Muriel’s Wedding, this is less The Devil’s Playground and more The Lazenby’s Sandbox as Josh Lawson’s George and the real deal both navigate the often dry anecdotes with a flair and sense of fun Bond documentaries tend to understandably steer clear from. Highly aware of the difference between real truths and personal truths, Greenbaum never judges Lazenby. Stories of acid trip experimentation, a yesteryear chauvinism and yet more bed-hopping are let under the fence for era-building set dressing.

“Peter, I’ve never acted in-front of a camera in my life.”

Of course, the shadow of Bond is never far away. The Aston Martin in the room is very much Lazenby’s sole spin of the 007 dice and a notoriety, fame and fan fondness that has ebbed and flowed from 1969 until this very documentary. Greenbaum drops in early car chase nods, Bond-savvy beauties, private jets straight out of Goldfinger, the all-important Bond Arriving bluster and caviar gags every OHMSS fan will spot a mile off. Whilst the Mayfair movie producer world of EON Productions and its South Audley Street history is not really the visual, sunny LA world as depicted here, EON’s founding creatives – Harry Saltzman (The Goldberg’s Jeff Garlin), Executive Producer Stanley Sopel and Peter Hunt (Adamo Palladino) – all feature, albeit in quasi, very loose portrayals.

“So we went off to Switzerland and now it’s time to shoot the movie.”

Notably absent if of course Albert R Broccoli. But this is Greenbaum’s take on George Lazenby, not strictly that of history. Or facts. This is not a documentary where truth gets in the way of a good Lazenby anecdote. This is a piece that diverts from the Bond circus to go back to a lost love that George clearly regrets letting go as the global phenomenon of Bond, the press calls and photo ops become his life for that brief but heavily scrutinised window of time. This is a film that has fun with the Eliza Doolittle-fication of the Bond-nearing George – as the elocution experts and tailors struggle to take the Queanbeyan out of this Eton-educated 007 and Peter Hunt labours to put Lazenby in a gunbarrel rather than a beer barrel. For a film that makes great strides to be quirky and stylised, Greenbaum doesn’t shy from threading in real OHMSS clips, interviews and behind the scene cine-footage. It is a structure that shouldn’t work and whose tones should clash more than Lazenby did with fate. Yet in curiously underscoring the subject matter himself, there is a great stylistic arrogance to Becoming Bond that utterly works.

Eventually the film naturally positions the whys and hows of Lazenby leaving the Bond role in its crosshairs. It is maybe here that Greenbaum lays his subject properly bare – as modern day references and examples of Lazenby becoming a cultural shorthand for the one-off man see the humour of the film dissipate. Lazenby admits to poor judgement. It is nothing new. He has done so on countless documentaries and featurette interviews since 1969. Yet, in the context of this buoyant, kind-minded and freshly pitched caper, Greenbaum lets the tragedy and regret of those decisions become acutely personal in a manner which leading man docs do not always get away with. Some of the marriages, relationships and movies are sidestepped. But this is not What Bond Did Next. This is Becoming Bond – and suddenly, very swiftly and by his own mettle, not becoming Bond. With a tinge of sadness in his voice and eyes, the second 007 suggests how when he looks back “maybe”, just maybe, he should or could have done two Bond films. Just to make sure and to hush up the critics. Well, under Josh Greenbaum and Becoming Bond, maybe George Lazenby has now achieved just that. It turns out the other fellow did have another big screen Bond outing in him after all.

Sadly, there are no extras on this DVD release.

Becoming Bond is available from November 6th on DVD.

With thanks to Studio Canal.