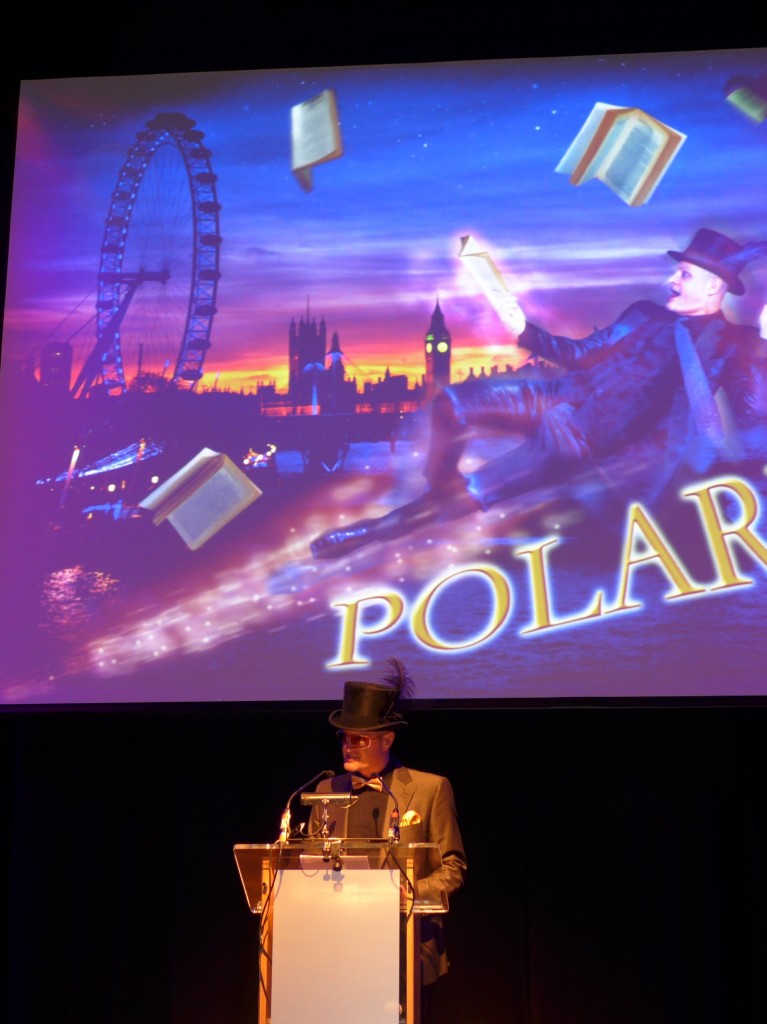 November 13th 2013 marked the night the Polari Salon had its annual Polari First Book Prize. Catching Bullets – Memoirs of a Bond Fan was on the shortlist this year so attendance in spesh clothing and clean shoes was a must. And no, I didn’t wear the Octopussy dressing gown or Roger Moore ski-suit despite hinting on Twitter I would (the many open stairs at the Southbank Centre rendered the Octopussy nightgown a no-no for anyone underneath not wanting to cop a peek).

And what a grand night it was, putting – as ever for a Polari gathering – the great and the  better all together to honour all guises of the queer word – spoken, sung, poetry, narrative fiction, non-fiction, stand-up, performance art and speech. And that was just host Paul Burston’s entrance!

Before the Prize winner was announced, Polari took on its more familiar monthly form. The nights are held at London’s Southbank Centre, cost a very fair fiver and represent two hours (plus interval, book and beverage stall) of the best LGBT readers and writers out there. This month’s menu of salonistas included Rosie Garland, Patrick Flanery, Dee Chanelle, Helen Lederer, Dean Atta and Charlotte Mendelson. It is hard and wrong to underline faves, but Patrick Flanery’s prose was fragile and quick-fire, Dean Atta’s stand-up poetry struck a very contemporary and sadly apt chord (“racism is institutionalised thinking“), singer Dee Chanelle gave the Brazilian street dancers a run for their volume-levels next door and Helen Lederer (a comedy hero of mine) was typically self-deprecating all over the podium.

And then to the grand master-plan, the denouement of the night and Polari’s crowning glory – the Polari First Book Prize 2013. Announced in true “Acadamee Award” style by the quietly incisive VG Lee (a new comedy hero of mine), the Societe Generale sponsored trophy went to Mari Hannah and The Murder Wall. A lovely winner clearly in awe of her charity telethon sized and much deserved cheque took to the stage and made winners of us all. Okay, she didn’t at all. Nor should she. It was her moment and she earned it. Us other four shortlistees got to go home with the ‘win’ that Polari and Paul Burston took us under his sterling wing. Not only have I been asked to read at Polari this year but I have seen first-hand the immense value and support mechanism it represents for queer writers. Writing is a lonely practise at the best of times. Paul himself has rightfully remarked how writing needs a reader to complete the process. Polari allows all manner of voices a podium or chair or even sometimes just a Re-Tweet and gives an audience to so many people, including myself. That is worth its weight in gold. The use of words as help and support versus the use of words to hate and incite is still the centuries old dilemma of language. Even now the use of phrases like “dyke” or “queer” is over-worried by the over-worriers, when it is up to gay individuals to adopt it into their parlance and out of the box marked “abuse”. Included in the audience was Nigerian activist and TV host Funmi Iyanda and out-gay Nigerian Bisi Alimi (now a welcome UK resident having had to flee his home country and family). The pair have their own [and sadly very] valid LGBT story to tell and THIS is where Polari is more than a few dykes and queers supping Pinot from plastic glasses in the name of literature (not that Burston would allow that complacency to sink in – hence his ever changing rota of readers and performers).

Polari and the work and efforts of its alumni, audience regulars (the life and pulse of each monthly gathering), venue owners and just those that pass the word on is one of the greatest LGBT assets in London and indeed the UK (where Polari is stretching its wings north – see here).

Furthermore, Paul and his team of judges give their time and efforts to reading the longlist and shortlisted titles and for my tale of a 1980s Bond fan to even get dropped on the “to read” pile is the stuff of privilege.

For more on Polari and why you should get along, click here.