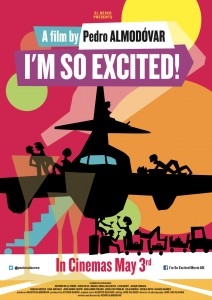 “Fasten your seatbelts, it’s going be a bumpy night”

With King of the Tangent himself Pedro Almodóvar on duty as chief flight recorder, pilot, trolley dolly and navigator, I’m So Excited! is a boisterous stopover of a film. Less long-haul than the melodramatic Volver, clever Live Flesh or the masterly All About My Mother, Almodóvar’s nineteenth feature is a short-haul hen-night of a movie, as quick to get into as it takes to blow up one of those canary yellow safety vests.

Welcome to Peninsula Airlines Flight 2549. You will be cruising at an altitude of 32,000 feet. Literally. And if nothing excites you on the duty-free cart, there will be enough in-flight entertainment and emergency grandstanding to keep children of all ages (and predilections) entertained.

This plane is like a sunlit backroom – floating on clouds of mescaline, passion and resignation. Neither bitter or moral, this is Almodóvar as chief pilot of a Mile [very] High Club. Never mind the fuel the plane suddenly has to burn off before an emergency landing. Almodóvar’s own script is more concerned in his motley passengers jettisoning absurd amounts of tequila, vodka and Valencia cocktails. Pilots, co-pilots, stewards, ground staff – everyone’s necking a quick shot to take the edge off. Before having another. An Easy Jet flight to Sitges packs less booze than this. Yet, as such happy-hour excesses soon replace characters inhibitions with much needed action (Lola Dueñas’s virginity status is quite cheekily – and anonymously – downsized at 30,000 feet), the weight of everyone’s emotional ballast nearly drags the flight into the sea. A mostly empty business class section and a disgraced banker speaks volumes about Spain and Europe’s economy – with the stricken Peninsula 2549 flight struggling to find an airport that is manned, let alone not cash strapped. But that is as political as Pedro gets. His world is one where men are already in marriages to each other (be it sexual, spiritual or actual), mistresses are afforded perceptive back stories and empty control towers are manned by a husband and wife and their packed lunch.

Just as the theatrical Women on the Verge of a Nervous Breakdown (1988) pitches itself in a farce-like apartment, its nearest sibling I’m So Excited! relishes the proscenium confines of this Peninsula flight – affording Pedro his trademark backstage wranglings, curtain twitching, character hierarchies and story-centric phone-calls. It is certainly Almodóvar’s simplest effort for a while, jettisoning the masterful twists of Live Flesh and The Flowers of My Secret for an unabashed pantomime of an in-flight movie that unfurls as if Airplane had a quick knee-trembler in the disabled toilets with Carry on Emmanuelle and Shortbus was the result.

Gone for now are the masculine pulses and of The Skin I Live In and Broken Embraces. Here they are replaced for the mescaline ones of a cabin-fevered cabin-crew led by self-destructive, yet puppy-eyed steward Javier Cámara (Talk To Her, Bad Education) and Pedro newcomers Raúl Arévalo (granted a Pedro tache on his first outing) and portly Carlos Areces. If this work-weary triumvirate steal the movie, then it is the scene-chomping Areces who gets the ‘Peninsula Employee of the Month’ award with his dour queen Fajardo forever hand-fanning his magnificent cow-lick fringe amidst his random urges to pray into a brassy pop-up altar.

As Almodóvar’s gayest film for quite a while, there is very little room in the aisle for any straight manoeuvring. Like most of Almodóvar’s efforts, even the straight women behave like gay men. And possibly vice versa. Not that every persuasion doesn’t get a chance to “check in” on this voyage. Everyone is at it. From the hot straight couple fresh off a three day wedding bender (and a curious affliction the sexy groom is milking to the hilt) to a bi-curious co-pilot, a horny security officer and a veteran soap actor juggling a suicidal ex and a shrewd new squeeze via misplaced cell phones. So far, so very Almodóvar.

With crew and passengers pitched as types culled straight from 1970’s Airport, Almodóvar has early fun churning out the disaster movie character tropes (the disillusioned suit, the veteran fun-time girl, the cabin crews in mid-affair, the family man pilot’s bit on the side, a concerned psychic and a potential killer). Yet, as much as Almodóvar lets the film party with this entertaining bunch, he still takes the time to surprise, to charm and regret. Just as Airport 1975 had the real Norma Desmond in the guest-starring likes of Gloria Swanson, I’m So Excited! gets its own Norma in the guise of the fabulous Cecilia Roth (All About My Mother) as society dominatrix and potential government-toppler Norma Boss. This Anna Wintour fringed ice-maiden is the most familiar from Pedro’s oeuvre. We are told this is a character that – like the director himself – emerged onto the scene in the late 1980s, ruffled the establishment’s feathers and subsequently hit her stride in her 50s.

One of the utter joys of an Almodóvar film is how he lets you go ahead of his story and characters, allowing the audience to curve off with their absurd notions and plot predictions. You kick yourself for thinking that wildly or crudely. But then suddenly Pedro takes you by the hand and ‘goes there’ for you with a day-glo aplomb that is forever liberating and – most vitally – honest. The director’s CV is on show throughout. From key Pedro icons Penelope Cruz (Volver, Broken Embraces, Live Flesh) and Antonio Banderas (Matador, Laws of Desire, The Skin I Live In) playing consequential ground crew to the point of almost giggling on-screen at the fun of it all to the lies men tell of Laws of Desire, the drug dependencies of What Have I Done To Deserve This and Norma Boss’s sado-masochistic day job echoing Tie Me Up Tie Me Down.

Like a trashy airport novel, I’m So Excited! is a wondrous, crazy holiday distraction. Never meant to outstay its welcome, it is a rude jaunt farcing about its tight running time. Pedro purists might want this frothy baggage reclaimed immediately, but he still carefully peels back the motifs of character like the cling-wrap on a Stansted Airport beef casserole. This is a deliberate inflight meal of a movie – easy to get into, tastes better than it looks and will perfectly suffice until you touch down. As a comedy it is possibly more successful than Women On The Verge of a Nervous Breakdown – which now pales when compared to what Almodóvar did next. He is now a genre all of his own, one that has re-pointed people’s opinions and views on Spanish cinema and culture. As fun goes and the summer blockbusters start circling the skies, I’m So Excited! deftly proves Pedro Almodóvar can still drop a big block of blue toilet ice onto his rivals. Just when does this “seatbelt” sign disappear?

With thanks to Pathe UK for the screening.