“And anticipation is a big part of the appeal. To this day, the arrival of the Bond teaser trailer is a red letter day for me”

Going viral round the globe quicker than Moonraker 5 or a Telly Savalas flu jab, the newly premiered trailer for SPECTRE hits the snow/water/gravel running and is surprisingly chaste for what could have played out as Skyfall II – Back To The Chapel. 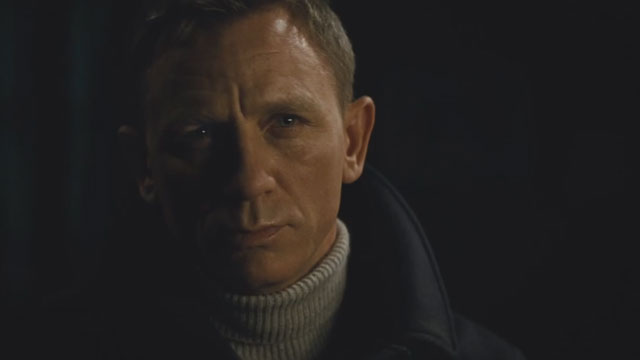 A destroyed MI6 building below The Fighting Temeraire’s oily horizon, Naomie Harris’s Moneypenny doing her subtext best with a flight recorder box of Bond’s salvaged memories and holiday selfies (though shouldn’t photos of a young Craig/Bond skiing show a bit more colourful 1980s exchange student ski-wear?), Bond at home and no doubt digging out his 1973 dressing gown (with his Live and Let Die coffee maker in one of those packing boxes), Bond being taken on a Who Do You Think You Are journey (there may be tears to camera before bedtime) and finding Catweazle – sorry, Mr White – hiding in an Austrian lodge not totally dissimilar (and wilfully so) to the interiors of Dennis Gassner’s 2012 Skyfall Lodge.

Though despite the obvious leanings to Ian Flemings’s Hannes Oberhauser (Octopussy and The Living Daylights, 1966), climbing accidents, parental loss, orders of “Temporary Guardianship” and Monica Bellucci marked out in a sort of Bertolucci-framed grief there is a delicious additional sense of baroque villainy already in place in this newest 007 bullet. No doubt taking the tonal baton started by writer John Logan (who wrote the arched dialogue between Silva and Bond in Skyfall) SPECTRE looks to have an apt and shadowy sort of medieval sense of occasion guided by secretive, enclaved traditions (not totally un-removed from how Bond trailers themselves step out from the online wings). There is also that deliciously arched sense of dialogue and statement, in part from Logan’s pen. Oh, and Judi Dench’s M looks to be all over this film. Just sayin’.

“I always knew death would wear a familiar face, but not yours“

No three pronged Walther PPK’s, no Thunderball droids, no CGI Aston Martins cascading through a signature theme. This ain’t The Sith Who Loved Me. This is pared down Bond, the Masters Year of Daniel Craig’s four film tenancy (so far). And is this the fully fledged return of Ernst Stavro Blofeld (after all he’s had 34 years to escape Beckton Gas Works – or the McClory legalities as they are also known) or have Eon Productions, director Sam Mendes and the writers got a few white cats of intrigue up their Mao sleeves (and yes, that is a Mao collar on Christoph Waltz there, no?). Well it better be!

One thing that is less evident as the trailer concludes with Bond stepping into a cultish invite-only Eyes Wide Shut territory is that the seated silhouette of Christoph Waltz about to do The Voice on 007 (“you owned that song, Mister Bond“), is we cannot yet see the rugs of surprise that are about to be pulled from under James Bond 007.

“Welcome James. It’s been a long time. And finally here we are”

SPECTRE is released in the UK in October and around the world from November.