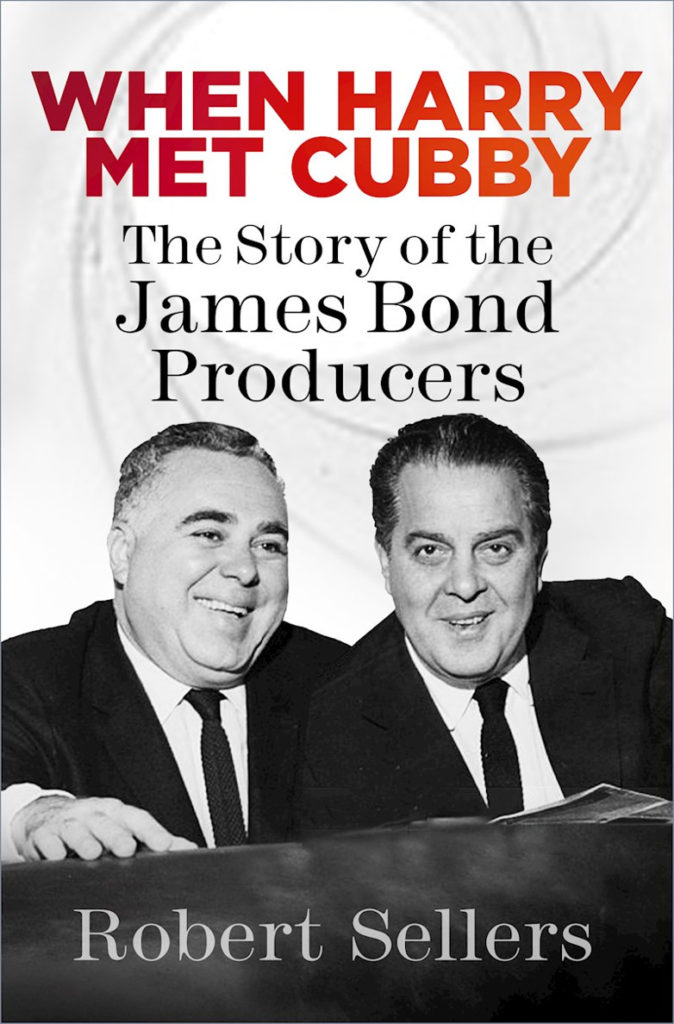 The movie fortunes of James Bond 007 did not start when two white dots danced across a London screen in October 1962. They began when the two men whose names flanked those two white dots first shook two hands and created a business partnership that very quickly changed action movies, popular culture and cinema itself. Step forward film historian Robert Sellers and his new book, When Harry Met Cubby: The Story of the James Bond Producers. However, in a year marked by yesteryear movie biopics (Judy, Stan & Ollie, Once Upon a Time in…Hollywood, White Crow, The Crown III, Ford Vs Ferrari, Seberg, Tolkein, A Beautiful Day in the Neighbourhood and Rocketman) all circling the origins of our pop-cultural behemoths, how does a new look at the birth and golden adolescence of the onscreen 007 stand up?

With The Battle for Bond, The Secret Life of Elstree Studios, Hellraisers: The Life and Inebriated Times of Burton, Harris, O’Toole and Reed and Always Look on The Bright Side of Life already filling his own studio lot, Robert Sellers is a familiar British film historian and chronicler. As a journalist and film fan, his taste for the detail and the point of a yesteryear movie anecdote is well proven; as his passion for those home counties studios, production egos, slammed phone-calls and on-set spats.

And the origins of the onscreen Bond are as precarious as any Hollywood tale of fate, hastily signed contracts and concerned studio heads. In a late 1950s world of Anglo-American producers stretching their wings across the Atlantic to see if the British film industry had better financial and creative breaks than a Californian movie industry facing the might of television, the streets of Mayfair inadvertently became the UK’s Burbank. And it is here Sellers frames the celluloid birth of Bond when two émigré producers called Albert R. Broccoli and Harry Saltzman believed the movie and cultural tides were turning and the 1960s might need some 1960s-minded adventure rather than just creaky war films, kitchen sink soap operas and third-rate fantasies. Broccoli had already gained some British-based momentum shooting adventure-minded B-movies with British crews and burgeoning stars in real locations. And Saltzman had the beginnings of the option to JFK’s favourite spy novels. With both men from blue collar backgrounds and sensing the time of old empire and old cinema to be over, the stars seemed to be in alignment for a new constellation of contemporary movie adventures. Cue Robert Sellers and his well-honed style of stitching various existing interviews and publications into a fast new narrative describing the tale. 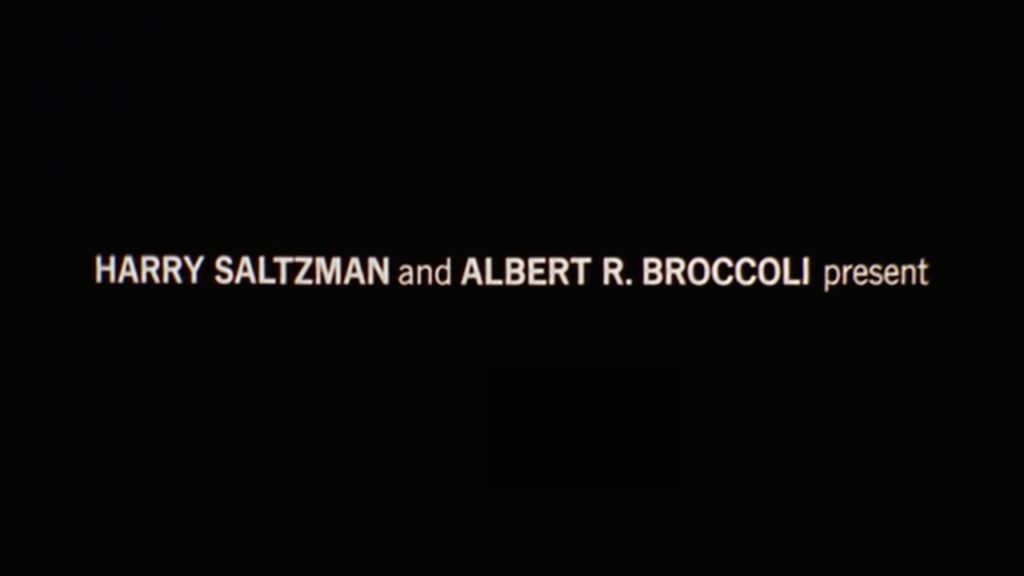 Admittedly, whilst it is ever-fascinating Bond history ground, it is already sometimes well-trodden ground. A chapter on Cubby Broccoli begins with exactly the same Charles Lindbergh plane remembrance the producer lent his own autobiography When the Snow Melts (written with Donald Zec, Boxtree, 1996). Some of the audition processes, studio one-liners and production anecdotes are also familiar dressing. However, whilst the use of When the Snow Melts and the first wave of Bond DVD documentaries are notably mined throughout the book a great deal, it is in the smaller details where Sellers brings real character to the story. More importantly, the author has also peppered the writing with his own interviews and threads those findings into the story too. Tales and nods to Harry Saltzman’s daughter Hilary being taught to drive by title designer Maurice Binder, the abandoned EON Productions projects, an ill-fated Saltzman musical starring Olivia Newton-John (“the first outer space musical“), Saltzman seeing zero scope in bringing The Woman in Black to the stage or screen, and Lord Lucan at least once being briefly considered for the role over [one might imagine] a rather dessert-wine heavy supper. These all lend great colour to a world that [aside from the films] has always been framed in monochrome Getty images and press call snapshots. And in parts the colour is very much removed from the onscreen fantasy of Bond.

One striking reminder of the real colours and principles of Cubby Broccoli are astutely laid out by Sellers. He rightly reminds how Cubby did not just hold tight when refusing to cut the gay contexts and affectations of his Warwick years film, The Trials of Oscar Wilde (1960), to appease the panicked minds of studio bosses and distributors. He also reacted to racist Louisiana officials by insisting the crew and cast of Live and Let Die be rightfully made up of black crew and cast members. Furthermore, one rich and brilliantly vivid account – which is a film in itself – sees Sellers also describe the time a young Harry Saltzman deliberately ensured countless Jewish entertainers and circus performers would suddenly find work and the appropriate papers to flee pre-WWII Germany and Poland. So far, so very Schindler’s List and a sad reminder how sometimes Saltzman’s ideas were just not his, but others future narratives to run with and make famous. Brilliant and humanistic beats like this see Sellers remind of the real historical context that generation of movie men came from – and why they instinctively knew the world needed some modern-minded entertainment and distraction. The author later makes a coy conclusion about why Saltzman and Broccoli went for Sean Connery when the studios were less sure. He suggests they recognised their own working class potential in Connery – a potential that ultimately lent great momentum to a movie series still riding high on that decision nearly sixty years later. Amidst the studious footnoting and sometimes rapid detailing, Sellers does bring out the real character of these two men.

“We kind of have a chemistry that gels.” – Harry Saltzman

When Cubby Met Harry – The Story of the James Bond Producers

Unlike Some Kind of Hero – The Remarkable Story of the James Bond Films (Matthew Field & Ajay Chowdhury, The History Press, 2015), When Cubby Met Harry does not have one eye on the current workings and era of Bond. Nor perhaps does it need to. Like all Sellers work, he sticks with particular windows and long gone characters in time. And he does so with valiant detail that documents that yesteryear tapestry of writers, casting directors, endless Soho lunches, co-producers, sheepish phone calls, angry phone calls, dismissed execs, intuitive secretaries, knowing assistants and reluctant leading men. And as some modern day headlines and fan debates like to panic when new creative blood is brought into a new Bond film, Sellers reminds that many writers and creatives have always had their fingerprints all over the series. Likewise, he presents a history and valuable context for some of the non-Bond EON productions and presents a 007 HQ that was as keen to stretch and tell different movie stories as much as Barbara Broccoli and Michael G. Wilson are today. 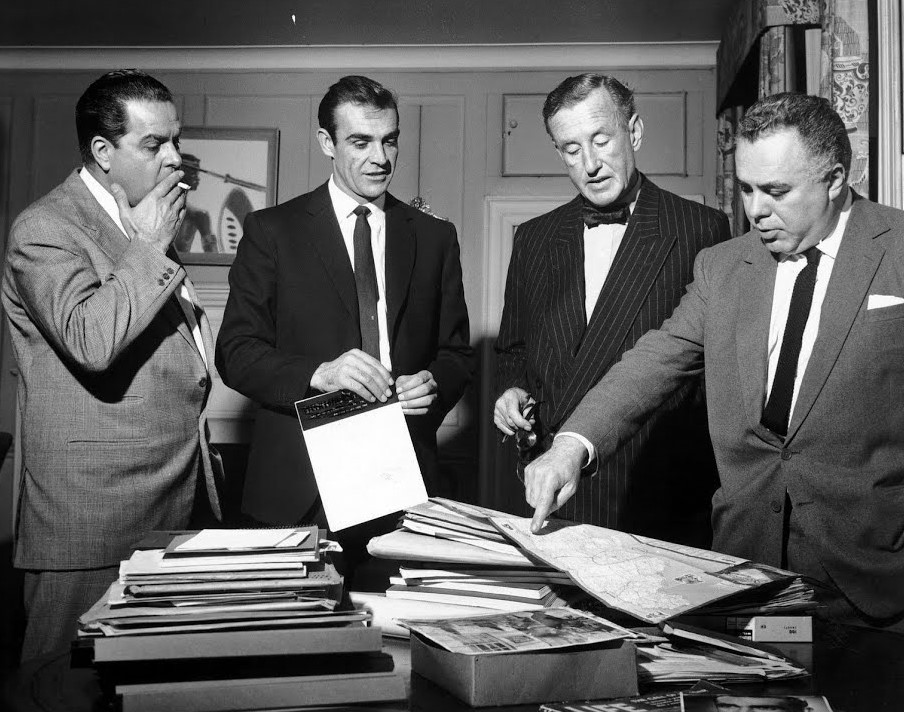 Whilst there is less linkage between Saltzman eventually selling his 50% stake in Bond and its later legal rollercoasters and minefields that affected the series after he finally bailed in 1975, Sellers does well in painting the sad demise of a bright star that had a larger-than-life glow – albeit with some sometimes tough minerals at his core. The author is certainly more interested in Harry Saltzman than Albert R. Broccoli. The former is granted a greater fascination, a more colourful timeline and ever crazy reminiscences. The line of the book is that Harry was always looking out of the South Audley Street office window for different yellow brick roads, whilst Broccoli would be sat at a desk more than content he had already found his movie Oz. Some more moments of the pair really chiming together might have been welcome. The accounts of their kids shared childhoods is somewhat absent. It was not a seventeen year history of constant disagreements, navigating personalities and debating counterviews. Sellers harvests a great many voices to attest to the relationship and working life between Cubby and Harry, yet rarely brings in his own conclusions. Ultimately, When Harry Met Cubby is ostensibly Saltzman’s biography. Sellers doesn’t undersell Cubby – who arguably gets kinder, warmer ink than his business partner. Perhaps because Bond is still very much a product of Cubby Broccoli’s literal and working families, the emphasis here is on the lesser known producer helix once responsible for the Bond movie genome.

“It did seem that Saltzman revelled in chaos.”

When Cubby Met Harry – The Story of the James Bond Producers

And whilst the book might miss more insight by not detailing the times, conversations and decisions of those times in-between the Bonds and the Harry Palmers and the Chitty Chitty Bang Bangs, Sellers rightfully gives the movie book world something it has sorely missed – a proper historical, detailed and occasionally affectionate look at the film producer Harry Saltzman. Some more downtime and breathing space could have worked in the book’s favour. But, Sellers often reminds how at least one co-producer did not know the concept of downtime and breathing space. The Saltzman framed by Sellers is a spontaneous force of excited nature with a magpie mind all over new ideas, new angles and new projects. Sellers reminds how that did also yield great glories, not just never-made curios ripe for books like this in sixty years time. The S.P.E.C.T.R.E. gardens overture of From Russia with Love was Saltzman’s idea. As was originally casting Harry H. Corbett in the role of Harry Palmer in The Ipcress File (1964). He wanted to do a full, no holds barred biopic of the gay dancer Nijinsky. And one fascinating notion of Saltzman’s was to do a younger Bond movie. It was a project he once circled with British producer David Puttnam. However, like many movie ideas – and even more Saltzman movie ideas – fate had other plans.

When Harry and Cubby finally dissolved their creative marriage neither shook the others hand. The two white dots of cinema that brought Bond to the big screen would become one much more determined, realistic, ultimately stronger and creatively complete circle under the sole captaincy of Cubby Broccoli. They do later build bridges and no doubt had that handshake more than once. When Harry Met Cubby is a fine testament to why – namely two immigrant showmen finally realised they had created cinema’s biggest circus and most famous ringleader. They might not have always put the tent up in the same place for the same reasons, but they both knew how to pack out the box-office with a show the world definitely needed and wanted.

When Harry Met Cubby: The Story of the James Bond Producers by Robert Sellers