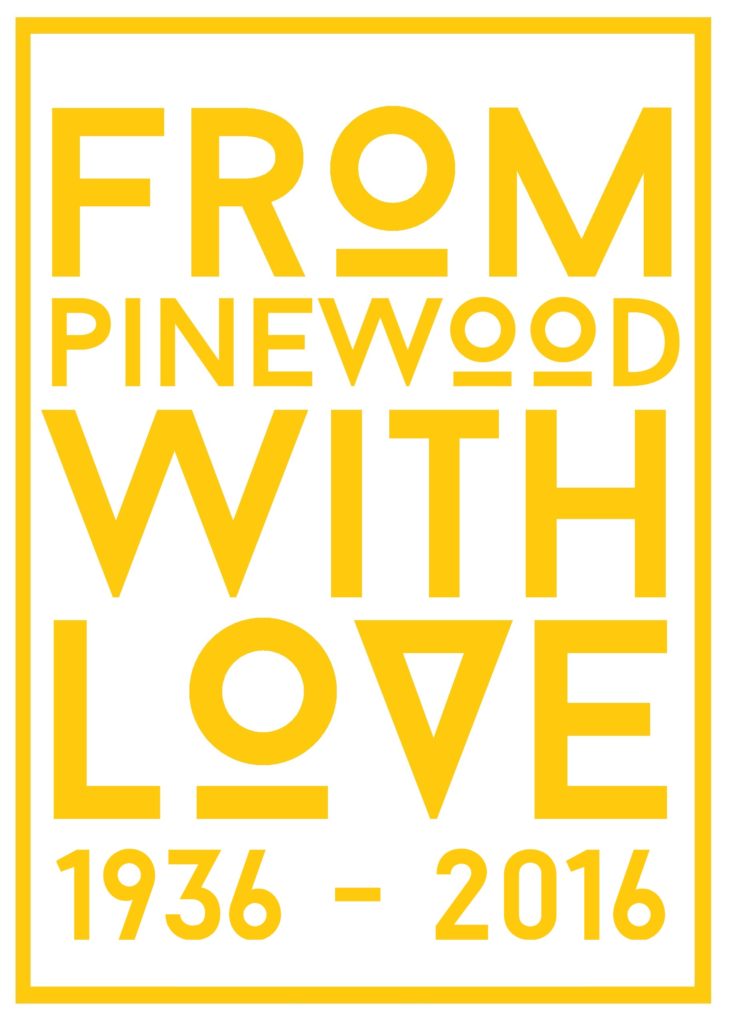 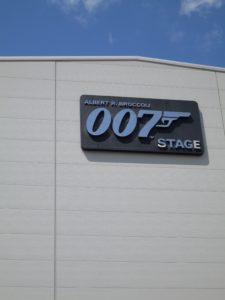 From London Melody to Film Stars Don’t Die In Liverpool, Pinewood Studios has now been home to British cinema production for eighty years. The moments of cinema that a plot of land in Iver Heath, Buckinghamshire can lay claim to are myriad. From Ripley and her flame thrower in Aliens, the first class X Men movie revival, the splurge gun attack in Bugsy Malone, the watery titles and Macau casinos of Skyfall on the water tank, the attack on Jaaku from The Force Awakens, the streets of Metropolis in Superman II, the November skies (and mud) of summer in Carry on Camping, David Lean’s sublime Oliver Twist, Douglas Bader flexing his legs and fortitude in Reach For The Sky, Sidney Poitier demanding attention in To Sir With Love , the killer plant and score from Little Shop of Horrors , playing itself in My Week With Marilyn, an elf toy making factory in Santa Claus The Movie, Kubrick’s many re-takes on Eyes Wide Shut, Fassbender’s Assassin’s Creed, the spin-off ambitions of Rogue One and now EON Productions’ apt story of a golden age Hollywood star caught in an early 80s Britain in Paul McGuigan’s upcoming Film Stars Don’t Die In Liverpool – there is a long, proud and growing lineage of productions lensed, edited, sound mixed and conceived at Pinewood Studios.

Pinewood Studios officially opened its studio doors on September 30th 1936. J Arthur Rank had gone into a partnership with housebuilding magnate Charles Boot to turn a former estate known to dignitaries, sportsmen and politicians alike (the 1921 Anglo-Irish Peace Treaty was signed in Heatherden Hall) into a thriving film studio complex on a par with anything turning cameras and heads in Hollywood. The soundstages were quick to be completed and after the ribbons (made of celluloid one hopes) were cut in September 1936 the studios became a much used commodity on the British and eventually international movie map. A stint as an offshoot home of the Royal Mint, a few fires, evolving technologies, the onslaught and eventual marriage with TV, production calamities, union walk outs, interesting dining faces in the Ballroom restaurant, through the night shoots, tours, tears and tiaras, Ken Adam designed behemoths, Oscars, BAFTAs, business partnerships, TV shows, commercials, pop videos, re-dedicated soundstages and reconstituted golf and milk carts all followed.

Drive-by genuflections aside, I first visited Pinewood properly and professionally in 2008. It was and still is exactly the sort of studio complex you imagine and desperately want to see. It was like that early scene in Who Framed Roger Rabbit where old Hollywood is seen in all its’ can’t stop, too busy glory. A-List names in full costume would pass by on golf carts, everyone had mic packs, clipboards and headphones, the crews would knock off to the bar for lunch, artifice loomed round every whitewashed corner, named parking spaces laid bare the pecking order and no matter what the weather every view told a story. But I was not the first O’Connell to slowly pass through that famed timber lodge entrance (which is no longer used). My grandfather Jimmy O’Connell had worked for Bond producers EON Productions and the Broccoli family as a chauffeur since the late 1950s. He would regularly make the trip from his home 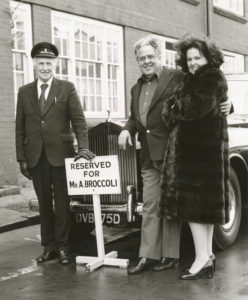 Hersham to Pinewood via South Audley Street London and vice versa. The names and gossip that Pinewood Road and its neighbouring pubs hold would be a twelve part memoir alone. One of my family’s fondest photos of Jimmy is one taken at Pinewood Studios and flanked by the Broccoli family as construction loomed on the largest single soundstage in the world, The 007 Stage. I would get memos, letters and posters – often on Pinewood Studios notepaper or branded envelopes (all of which I have faithfully kept to this day).

To this writer, author and Bond fan, Pinewood Studios is of course Xanadu – a 007th heaven of movie production, admin, incessant carpentry, haulage trucks, cable wranglers, rehearsal bells, the immediate silences on a take, the paper coffee cups, framed and always a bit sunburnt posters of past glories and the feverish five o’clock exodus round the roundabouts to get out and home every day. Such adulation was further helped by mid 80s Making Of docs which would inevitably go behind the Pinewood scenes with a reverence and magnificence that is catnip to movie fans brought up on Bond, Superman, Batman and Star Wars.

When I was later working on the comedy series Beautiful People we shot in the gardens of Heatherden Hall recreating a Dynasty catfight with Olivia Colman and Frances Barber in the ornamental fountains and gardens which have been a surrogate location home to the likes of From Russia With Love, Bugsy Malone, Cinderella, Carry on Henry, Harry Potter, The Wolfman, Goldfinger, Those Magnificent Men In Their Flying Machines, Frenzy, The Great Gatsby, Octopussy, Goldfinger, Carry on Camping and so much more. Everyone in the cast and crew knew we were on hallowed ground, a complex of complexes which wear its history proudly but often silently. When I drove my car into Pinewood to get to the stage housing the second series I had to keep driving around (parking is notoriously dicey at the Studios) and past and through the sound stages, Goldfinger Avenue and the 007 Stage. I don’t suppose my grandfather had problems parking when he was behind the wheel of CUB 1 and driving various James Bonds and one Cubby Broccoli to work. Although how he ever drove the sizeable CUB 1 Rolls Royce Silver Cloud through the tight timber lodge entrance remains a mystery to this day.

Of course the history of Pinewood reflects the successes and vagaries of the British film and television industry. Forever about to close, I remember a 1990 BBC Radio 2 celebration of Pinewood where its past MD Cyril Howard highlighted just how the famed movie nirvana had been on a financial wing and a prayer more than once. The 1970s and 1980s particularly were a difficult time for Pinewood and British film production. Where it not for a new Bond, a visiting Supergirl, a BBC sitcom or back to basics Batman, Pinewood may not have survived the 1980s and still now be movie behemoth more careful business plans and market safeguarding have now achieved. Movie fans are forever bereft at the inability of the public to be able to visit but be glad – it’s a sign of Pinewood’s industry that says it is just not practical. Not long ago I toured Paramount Studios in Los Angeles and was saddened to hear no motion picture had shot on the lot since 2008.

Of course movie production is ever fickle. But Pinewood has maybe learnt from its near fatal mistakes of the past and has not only created its own studio and business outposts throughout the world (Toronto, New York, Wales, Malaysia, the Dominican Republic and Los Angeles are all part of the Pinewood global map), it nurtures plans to expand its first and most special of sites. And now it sees its future, finances and security levels safeguarded for a while with a partnership with Disney to be the home of its Star Wars, its live action projects and possibly future Indiana Jones movies. It also now looks forward to a new chapter with a new owner as announced in July 2016. 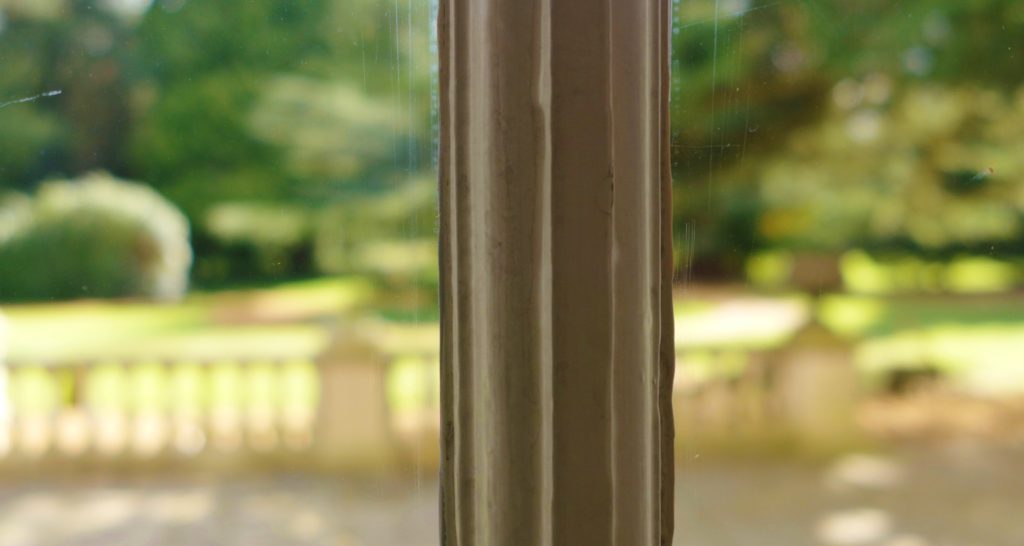 And now Pinewood Studios is the home of a rather personal production and one of 2015’s summer successes – namely my wedding. Pinewood of course chimed with my filmic and professional pursuits, our cinematic loves as a couple and shared family working histories. More importantly for us and our endeavours to avoid a My Little Pony wedding — it is a brilliant boy’s playground, a cinematic sandpit with a 1930s English country garden beauty all of its own. The dream palace I longed to one day visit as a kid whose birthday fell on the same day is now where I married a man my 9 year-old self would not have thought possible as I watched the Making of Supergirl for the tenth time back in the Eighties. And this is being lent further poetry by the fact we are the first gay couple to have a full marriage on the Pinewood lot, Bond was shooting a few hundred metres away, the cranes were visibly lifting in Westminster Bridge for Spectre, John Barry was played on a violin as we signed our documents, a dream performer kicked off our Pinewood Studio 54 evening ‘wrap party’, Rogue One had not long completed shooting and at least one 007 sent us a telegram. A place which wears its history at every turn now shares a tiny bit of our personal history. The ghosts of Pinewood’s golden age and its closeted stars will be no doubt spinning in their graves.

MADE AT PINEWOOD STUDIOS, LONDON

A glorious 1931 silent Pathe news reel looking at Heatherden Hall, the mansion at the heart of what would become Pinewood Studios. 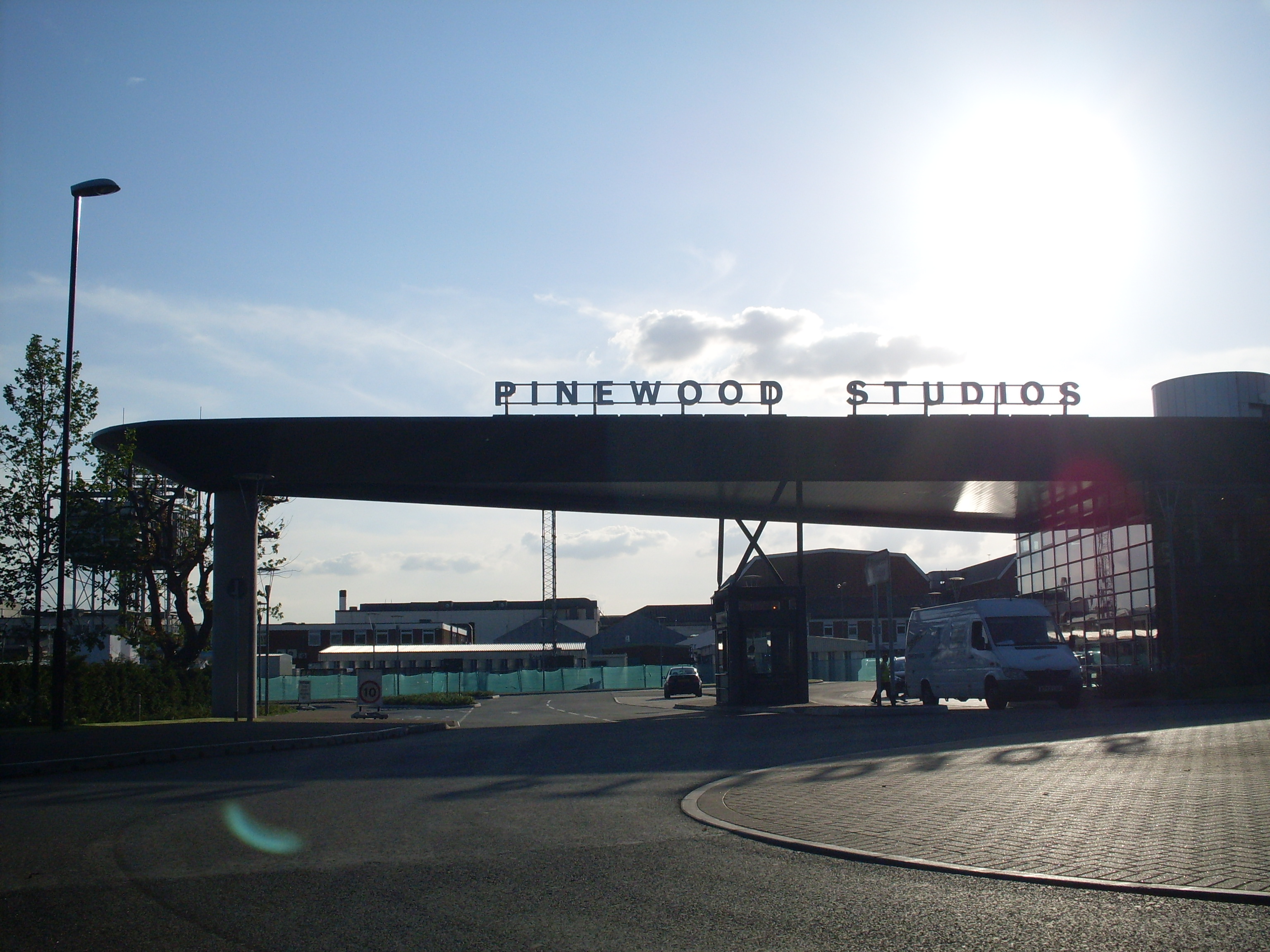